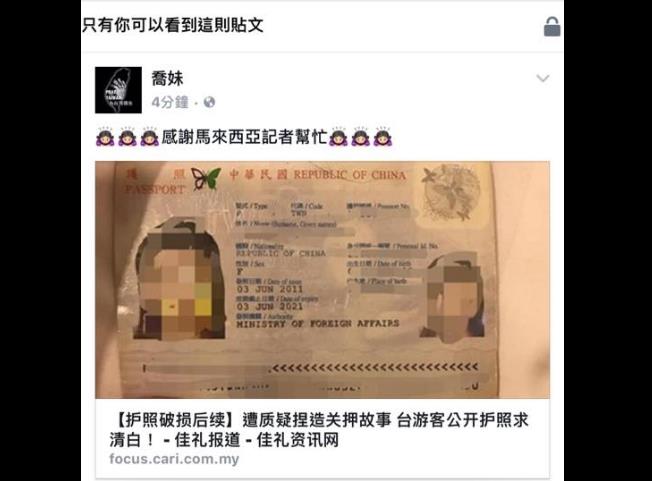 TAIPEI (Taiwan News) – A Taiwanese woman was detained at Malaysia’s Kuala Lumpur International Airport (KLIA) for 35 hours because her passport had been damaged, reports said Wednesday.

Writing on Facebook under the pseudonym Chiao Mei (喬妹), the woman said her smartphone had also been taken away, while in the end she was not allowed to enter the country but sent back to Taiwan.

On March 9, she took an Air Asia flight which arrived at KLIA around 8:30 p.m. An immigration official refused her entry because her passport was damaged, the Ministry of Foreign Affairs (MOFA) in Taipei said.

One of the pages had reportedly been torn during a previous trip to Japan when customs there ripped out a tax-free report form.

She was put on an Air Asia flight back two days later, on March 11, leaving KLIA at 9:20 a.m., but Malaysia provided no explanation for the incident, or for the taking away of her passport and smartphone and for her period in detention, MOFA said.

For short-term cases, the Malaysian authorities detain foreign visitors at a “holding lounge” inside the airport but do not notify the national’s embassy or representative, MOFA explained. In case a longer investigation is needed, the foreigner will be moved to a temporary “depot” in the neighborhood of the airport, and his embassy will be alerted to the fact.

Malaysia’s interior minister had reportedly ordered an investigation into the incident after the local Chinese-language media shed light on her ordeal.

On her Facebook page, Chiao Mei also alleged that one of the customs officers had asked for money, and that she was locked up in a small and dirty room with another Taiwanese woman because she refused to pay.

She described the room and the toilets, which did not have doors, as dirty. There were no beds or chairs, so she had to sleep on the floor, while there was only occasionally light.