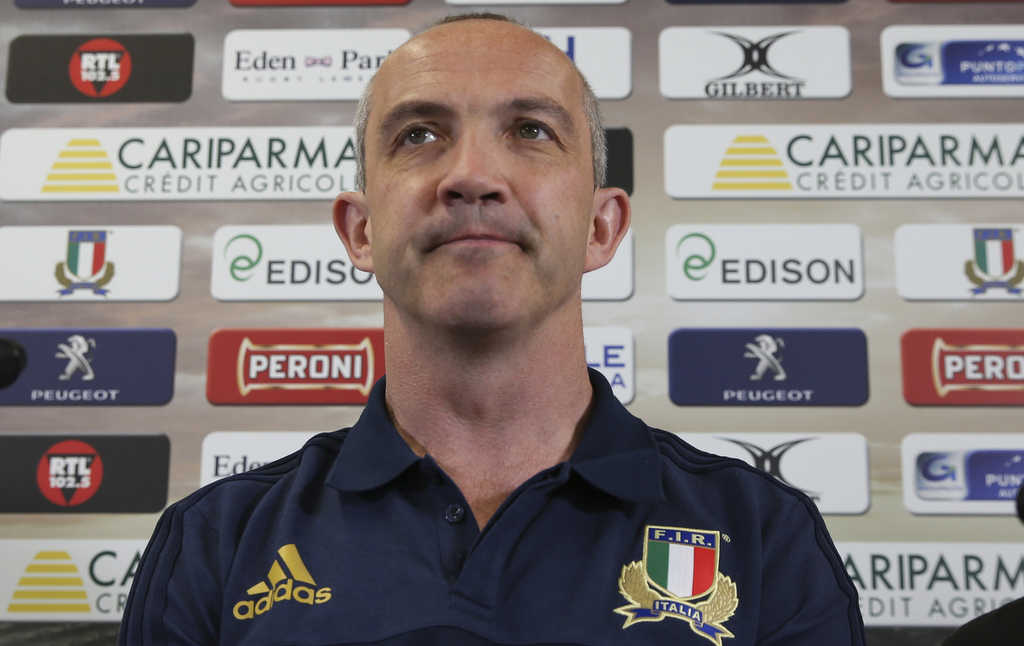 ROME (AP) — Conor O'Shea's next stop on a journey to make Italy a team others want to avoid is a home game against France in Six Nations rugby on Saturday.

O'Shea won admiration and provoked scorn when his astute but negative policy of not contesting rucks bamboozled England at Twickenham in the last round.

Rather than being blown away by England's attack that day, as most expected, the Azzurri led at halftime and confused England players so much they pandered to the referee to try and stop the Italians' non-rucking.

"It doesn't surprise me that the tactics chosen for the match against England had people talking," forwards coach Giampiero De Carli says. "There were many positive aspects from where to go on and a lot of margins of growth to learn. To continue our path: Winning Saturday against France would be a further spur."

Commendably, O'Shea has been unapologetic about the tactics, despite some stinging criticism from England coach Eddie Jones and others aghast that rugby's rulebook was exploited by Italy.

Whatever it looked like to others is of no concern to O'Shea, because it's part of a long-term plan.

"That performance was the beginning of a revival," he says. "The way we went about the game the last day was us saying we've had enough of people having a pop at Italian rugby. I want to see Italian rugby fight back."

Rather than try to make Italy evolve into a slick, ball-playing side with runners of finesse, it's very much a case of back to the future for O'Shea.

"The great Italian side of the '90s was a horrible side to play against. It was physical, it was in your face," he says. "We have to be horrible to play against and then we can evolve. By the 2019 World Cup I want us to be the team that no one wants in their pool."

France started well against England but faded in a 19-16 defeat at Twickenham; then resiliently beat the Scottish 22-16 at home in a performance more about grit than panache. Away to Ireland, there was another strong start and a halftime lead, only to end in a 19-9 defeat.

The return of flyhalf Francois Trinh-Duc should help the running game. A veteran of 56 tests, his comeback follows a broken arm in Novemerb against Samoa.

Trinh-Duc is a graceful runner, whose great acceleration over short distances punctures holes in midfield, and his future partnership with the young and skillful Baptiste Serin could be mouthwatering.

Noves will start with Camille Lopez at flyhalf, but Trinh-Duc is likely to come on during the second half.

He could also help France to tidy up its error-strewn passing game and sharpen its decision-making.

The second half against Ireland was a horror show of missed passes.

"We realized that we were tiring ourselves out too much by trying to pass from too far out, by wanting to attack from our 22 at all costs," center Gael Fickou says. "It's much more straightforward to play in your opponent's half. We must sort out which balls to pass and which to kick. It's a question of balance."

Noves has tinkered with his lineup, with flanker Fabien Sanconnie making his debut in place of Bernard Le Roux. The lively Brice Dulin comes in at fullback in place of Scott Spedding.

O'Shea has made three injury-enforced changes.

Flyhalf Carlo Canna replaces Tommaso Allan, who dislocated his shoulder in the 36-15 defeat in England. O'Shea will be hoping for a repeat of last year when Canna completed a full house of try, conversion, penalty and dropped goal in a narrow 23-21 loss in France.

Angelo Esposito comes in on the right wing, while experienced hooker Leonardo Ghiraldini is back starting.