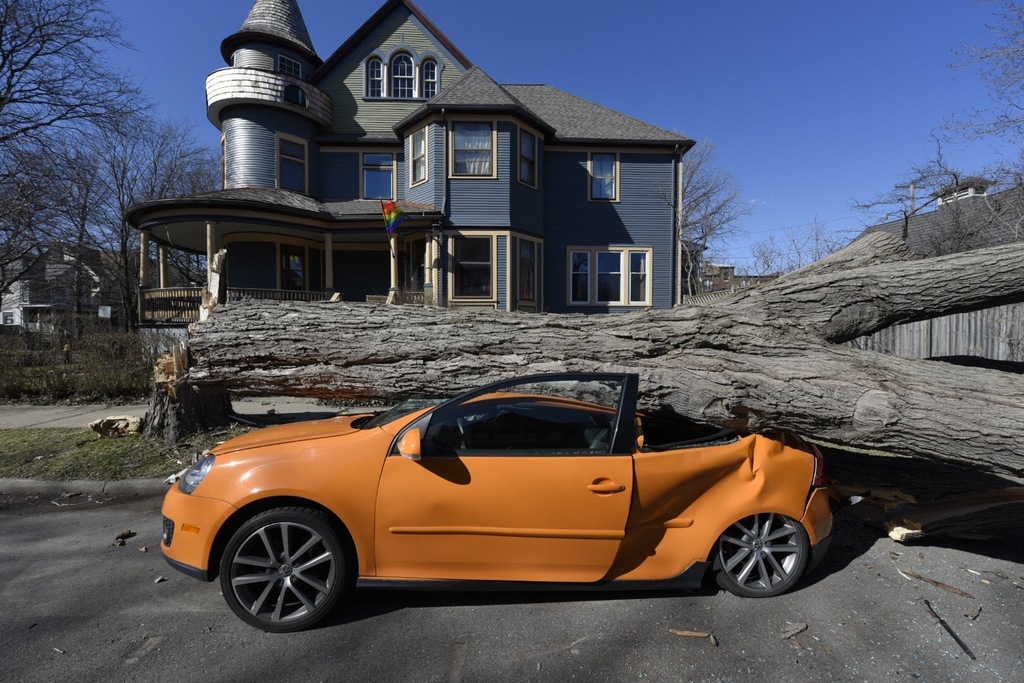 FREEMAN TOWNSHIP, Mich. (AP) — Two people were killed when powerful winds toppled a tree onto their car along a highway in central Michigan during a storm that knocked out electrical service to more than a million customers, authorities said Thursday.

The wind gusts Wednesday also fanned a blaze that killed five people in a Detroit apartment building and pushed a plane carrying members of the University of Michigan basketball team off a runway during takeoff. Forecasters said gusts topped 60 mph.

DTE Energy said roughly 800,000 of its customers lost power in southeastern Michigan, and more than 665,000 were without service late Thursday morning. Spokeswoman Stephanie Beres said it's the largest weather-related outage for the utility in 25 years, with more than 4,000 downed power lines.

Consumers Energy says about 178,000 of its customers were without power Thursday morning in other parts of the state after more than 300,000 were affected. The utility reported the winds took down 7,900 wires and broke about 1,000 poles.

"We have been working through the night and making steady progress," Guy Packard, Consumers Energy's vice president of energy operations, said in a statement. "The lighter winds make for improved working conditions for our crews."

Consumers said some customers in the most affected areas might not have power restored until Sunday, and DTE officials say they expect to have 90 percent of customers' power restored by that day. Additional workers have been brought in from Kentucky, Ohio, Indiana, Tennessee, New York and Pennsylvania.

Strong winds blew portions of school roofs away in the Grand Rapids and Saginaw areas, and knocked down trees and power lines. A fire was sparked by downed power lines in St. Clair County's Kimball Township, prompting nearby homes to be evacuated.

As the outages piled up Wednesday, Michigan Gov. Rick Snyder activated the state's Emergency Operations Center to closely monitor and share information. He said state departments and agencies were coordinating with utility companies and he was expected to offer a public update Thursday afternoon with utility and police officials.

"We also will be coordinating with local communities to see if they have additional needs to help their residents as the temperatures go down," Snyder said.