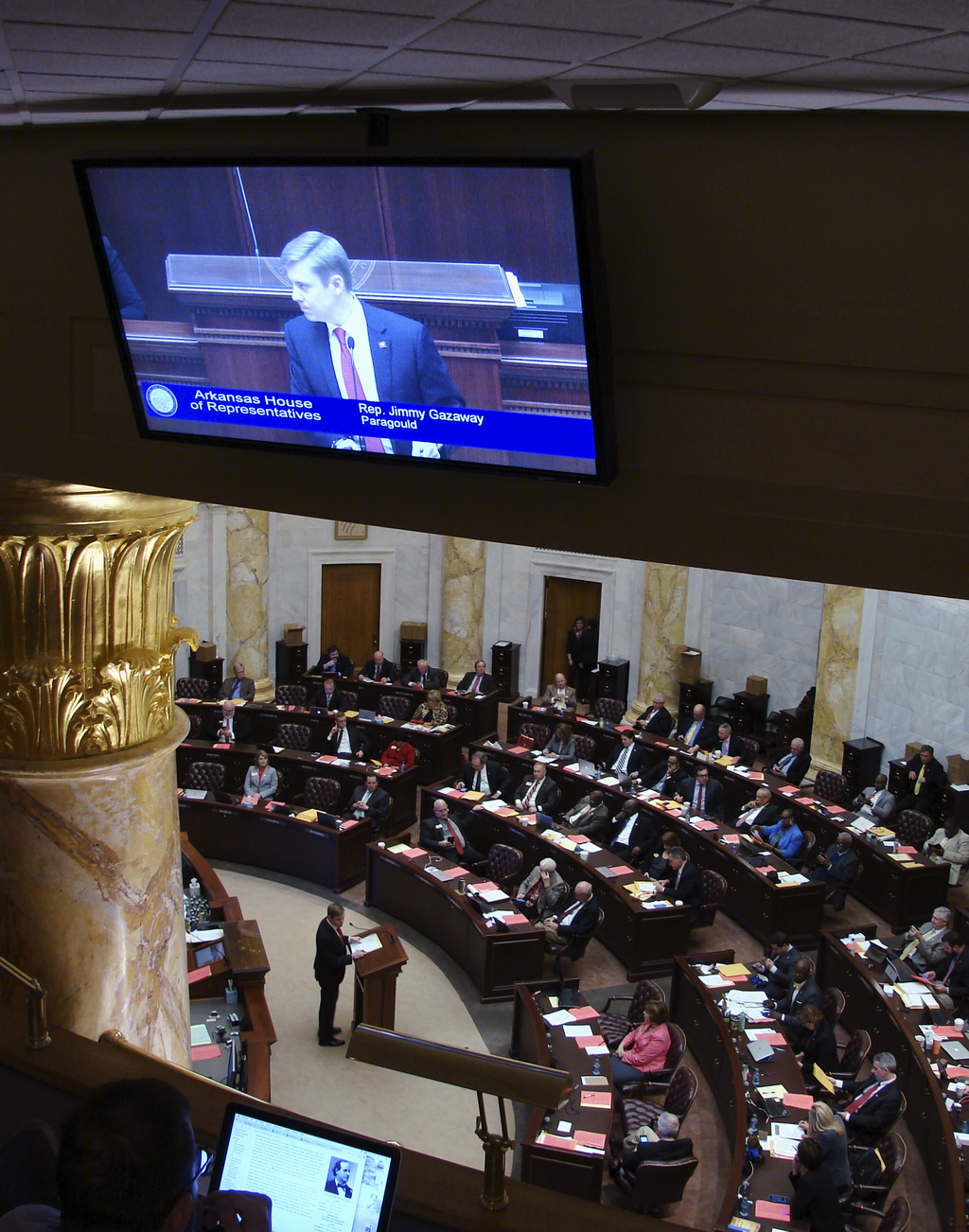 LITTLE ROCK, Ark. (AP) — Nearly six years after Arkansas police Officer Jonathan Schmidt was shot to death while pleading for his life, a dashcam video of his final moments still circulates on the internet — sometimes landing in the social media feeds of his family members.

"It's a very sacred thing," the officer's widow, Andrea Schmidt, said Wednesday. "It's not just a cop getting killed. This is a human being. This is my husband. This is a father."

Now a newly elected Arkansas legislator, a former deputy prosecutor who used the tape to help put Schmidt's killer on death row, wants to prevent other families from suffering. The first bill he introduced since joining the House would prevent the broad release of material showing officers dying in the line of duty.

"It's just a video of a murder. There's no general interest in that," said Rep. Jimmy Gazaway, a Republican from Paragould, whose measure needs only a final successful vote in the state Senate. He said continued interest in a tape of the shooting is "something that just violates our sensibilities."

Gazaway was a prosecutor when the Trumann Police Department distributed the 20-minute recording. The video typically shows up in the family's social media feeds around April 12, the day of the shooting.

"It's so horrifying to see it happen," the officer's father, Donald Schmidt, said. "I wish to God I had never watched it."

Under the bill, which passed the House on a 94-0 vote Monday, video showing a law enforcement officer's death would be released only if a court decides the public interest outweighs the desire for government secrecy.

"Every year, this recirculates. It's just a constant slap in the face," Trumann Police Chief Chad Henson said last month before Gazaway's bill came up before the House Judiciary Committee.

Algorithms are likely at fault: In Schmitt's case, if his name or the name of the Trumann Police Department pops up in a news story, someone might "like" it as a form of a tribute. As the story grows more popular online, various apps will seek other, similar items and try to link them. Eventually, that can lead to the police dashcam video Henson and prosecutors released at a news conference in 2012.

Prosecutor Scott Ellington said police and the lawyers who pressed the capital case against Jerry Lard didn't believe there was any way to keep the video out of the public's hands, especially after it was shown in open court. Faced with numerous records requests, they decided to distribute the tape at a news conference and urged the media to exercise restraint in broadcasting it.

The bill is one of many being considered this session that would restrict Arkansas' Freedom of Information Act. Open records advocates oppose Gazaway's bill but understand it is an emotional issue and likely to pass.

Under Gazaway's bill, if there's a public interest a judge can let it be shown in a public setting, though not for broad release.

Henson said the video remains a government document and that the public has a right to see it, but perhaps not to spread it widely.

"I've never been told, 'Thank you for releasing that video,'" Henson said.

Henson said the tape is more appropriately used for law enforcement training. He said the traffic stop that led to Schmidt's death became "too busy" for the officer — and that there were things Schmidt should have done differently after realizing a felon was in the back seat.

The dead officer's relatives say prosecutors and police notify them when the case comes up in the news so they can prepare to keep the video away from his three children and other young family members.