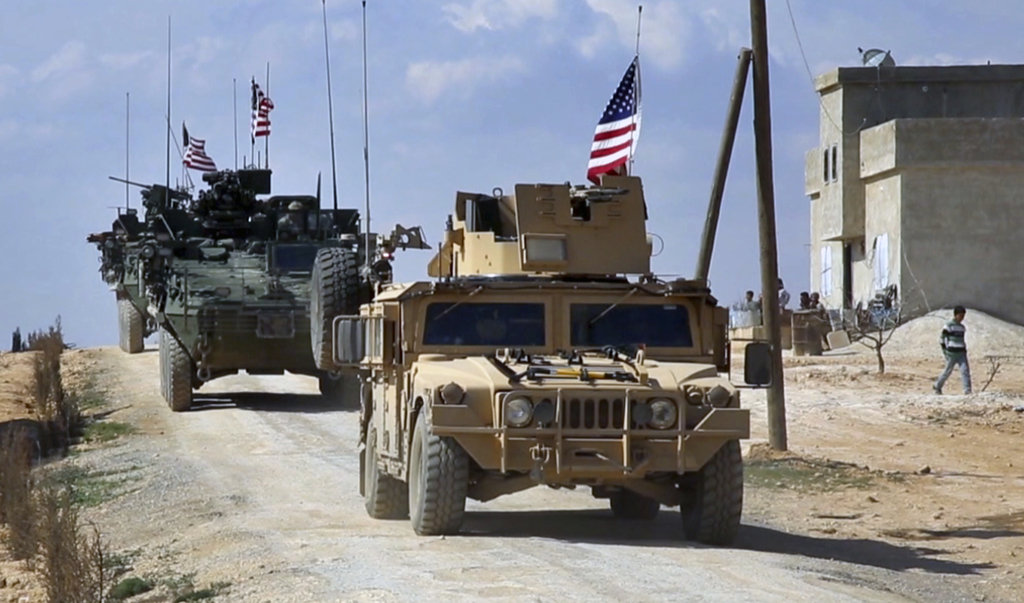 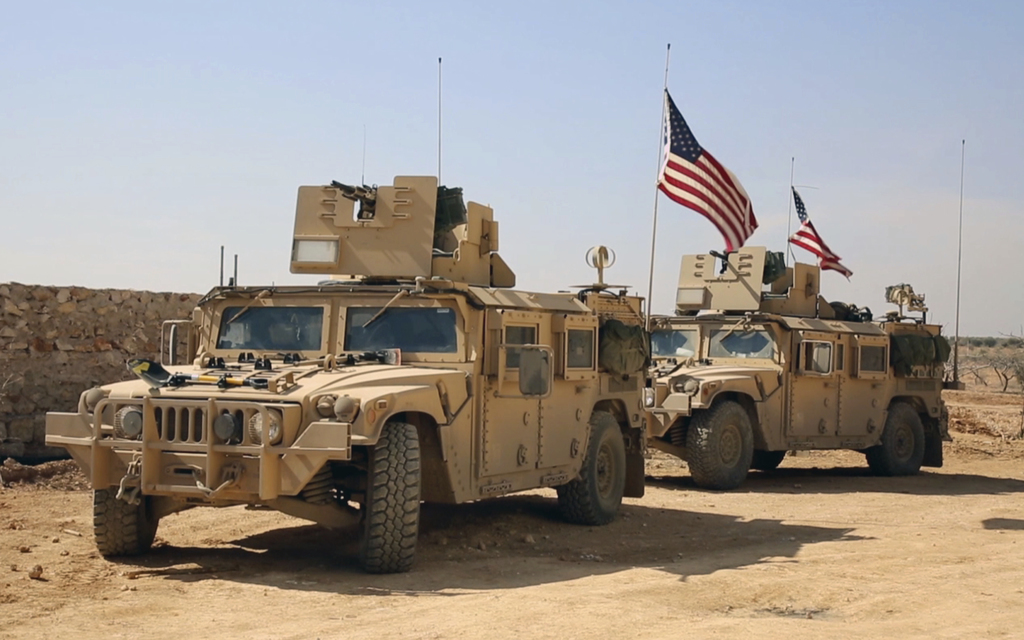 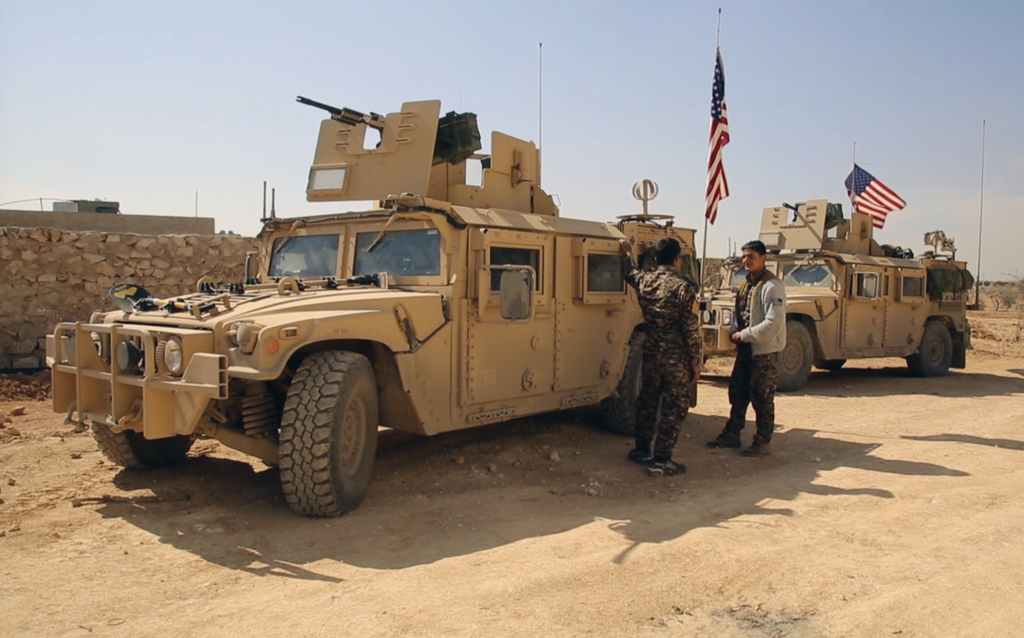 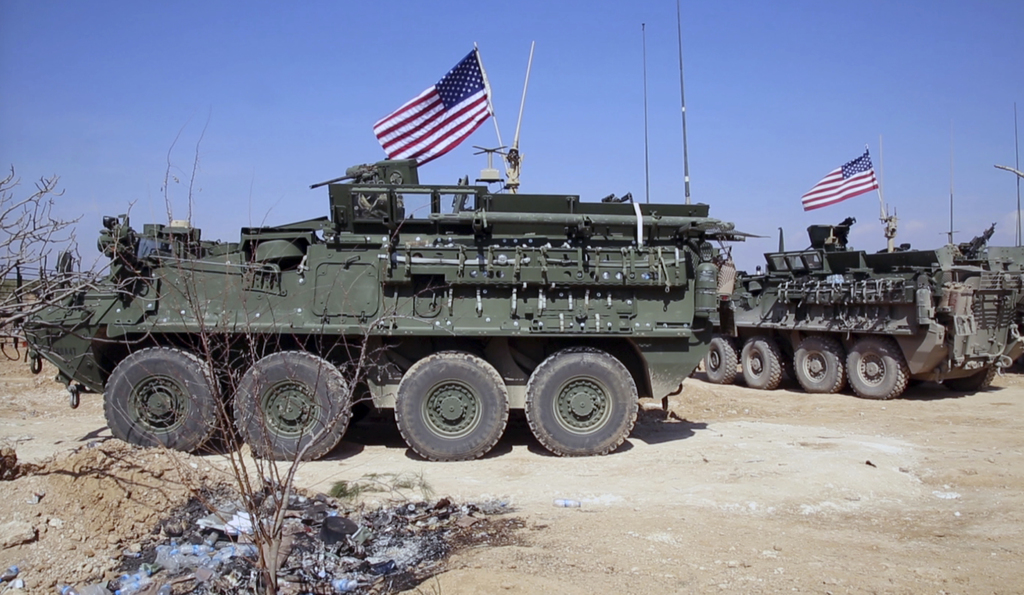 BEIRUT (AP) — Rolling around 200 Marines backed with howitzers into northern Syria, the United States is shifting from working quietly behind the scenes in Syria's conflict, turning instead toward overt displays of U.S. force in an attempt to shape the fight.

The latest deployment widens America's footprint in a highly toxic battlefield, with U.S. credibility and prestige on the line. It also risks drawing troops into a long and costly war with unpredictable outcomes.

The Marines' deployment, intended to back local forces in the campaign against the Islamic State group, came just days after another intervention. Dozens of Army troops, riding Stryker armored vehicles waving American flags, drove outside the Syrian town of Manbij in a mission aimed at keeping U.S. allies Turkey and Syrian Kurds from fighting each other and focused instead on the fight against IS.

The latest dispatch brings the number of U.S. boots on the ground in Syria close to more than 700.

The previous troops were quietly sent by the Obama administration to work with local allies against IS; most of them were special forces and advisers, and none brought heavy weapons like artillery with them.

But as the fight against IS gears up, so is the U.S. profile. After months of preparations, U.S.-backed Syrian forces are getting closer to launching an all-out assault on the Islamic State group's de facto capital, Raqqa, in northern Syria. The more robust presence could also reflect a freer hand given to the military by President Donald Trump, whose administration is drawing up plans for a Syria policy he has vowed will "obliterate" IS.

But the Americans are stepping into a crowded space in northern Syria, where U.S.-backed Kurdish groups, Turkish and Russian troops, Syrian government forces and Islamic State militants are all within firing range of one another.

That raises a number of concerns:

U.S. officials say the battle for Raqqa will look much like the fight in neighboring Iraq, where the United States has waged a heavy air campaign and deployed special forces at the front lines to back the Iraqi military, now in a fierce battle to retake the northern city of Mosul from IS. Over the past two years, the U.S.-backed international coalition has spent billions trading and arming the Iraqi military

But Syria is not Iraq.

In Syria, U.S. forces do not have a national military to partner with — unless Washington made a dramatic reversal and overtly partnered with Syrian President Bashar Assad.

Though no decision has been formally announced, the U.S. is likely to partner with the Syrian Democratic Forces, which is dominated by Kurds, though it includes some Arab fighters and other ethnicities. The U.S.-backed group has proved to be the most effective fighting force against IS in Syria, moving in past months to isolate Raqqa and cut off supply lines.

But it is still seen as ill-equipped for the difficult assault on militants entrenched in the city. That could bring pressure for a greater U.S. role — and a greater risk of confrontations with other players on the ground.

Partnering with the Kurds to take Raqqa could also cause major damage to the U.S. relationship with NATO ally Turkey. Turkey has suggested its own military and its allied Syria forces should mount the fight, and that U.S.-backed Syrian Kurds should be excluded.

"If the U.S. were to prefer terrorist organizations over Turkey in the fight against IS, that would be their own decision, but that wouldn't be something we would consent" to, Turkish Prime Minister Binali Yildirim told The Associated Press Thursday.

Yildirim said in an earlier exchange with visiting foreign journalists that ties between the two countries would be significantly undermined, though he wouldn't specify any steps Turkey — a member of the U.S.-led coalition fighting IS — might take. In the past, Turkey has hinted it could cut off access to Incirlik air base, home to coalition warplanes.

Ankara sees the Syrian Kurds as an extension of its own Kurdish insurgents. Turkish forces and Kurdish fighters have outright battled in northern Syria, where Turkish-backed Syrian forces pushed IS out of a pocket of territory near the border.

The U.S. deployment in Manbij intentionally puts Americans in the middle of that rivalry, hoping to cool it down. The Syrian Democratic Forces retook Manbij from IS control, and Turkey — with its troops nearby — says it won't allow the town to be under Kurdish control, threatening to move on it. The American presence appears intended to reassure Ankara the Kurds don't hold the town.

By partnering with the Kurds in the Raqqa assault, the U.S. also risks being seen as entering into an indirect alliance with Russia and Assad's government, which it backs.

With Russian air support, Assad's troops and allied forces like Lebanon's Hezbollah have advanced against IS in northern and central Syria. In the Syrian army's advance against IS troops in Palmyra, the troops were indirectly aided by U.S. airstrikes against the group.

Promising to scale up the war on the Islamic State group, Trump has hinted he would be less averse to an implied alliance with the Russians and perhaps even Assad, which he has described as a better option than the rebels.

But even a perceived lean toward Moscow and Damascus could bring a backlash from fiercely anti-Assad factions on the ground, threatening to draw American troops into the wider civil war in Syria.

Karam is the AP's news director for Lebanon and Syria and has covered Syria since 1996.