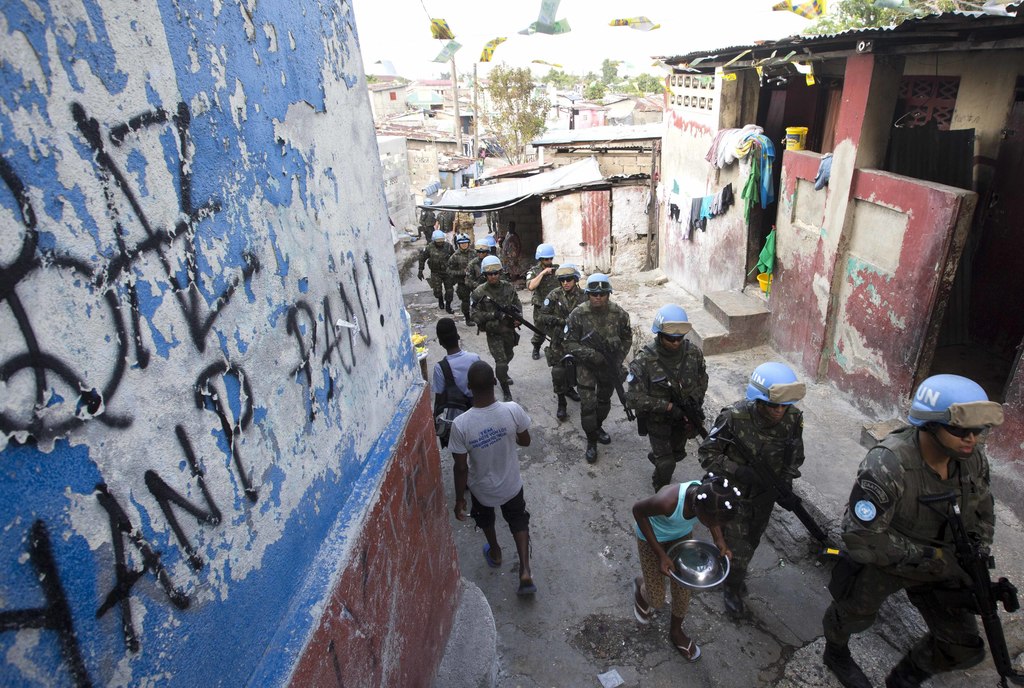 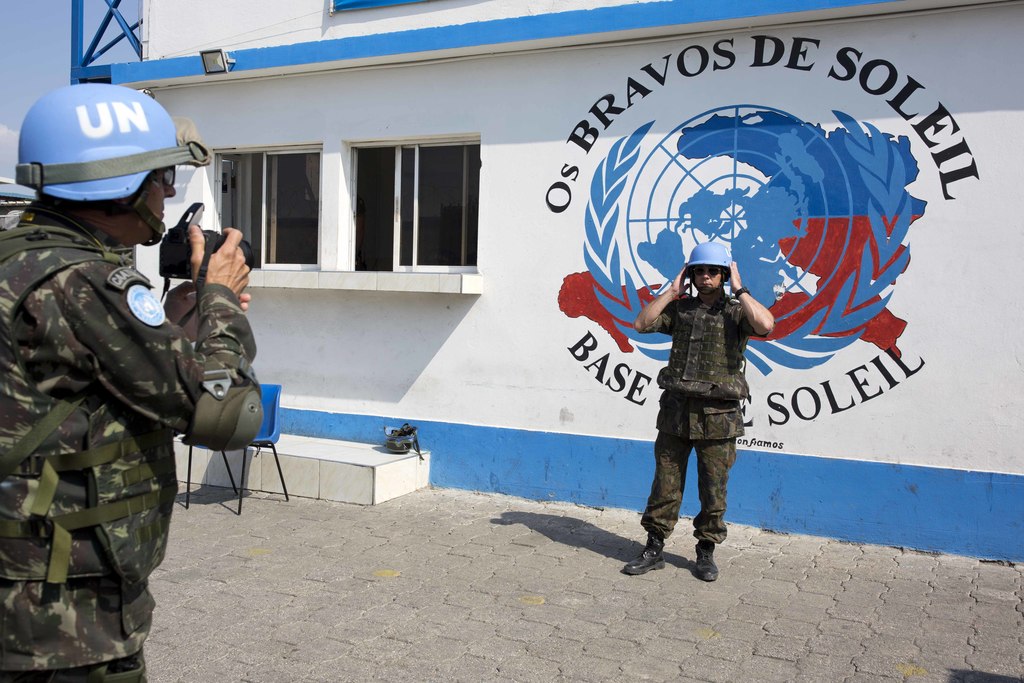 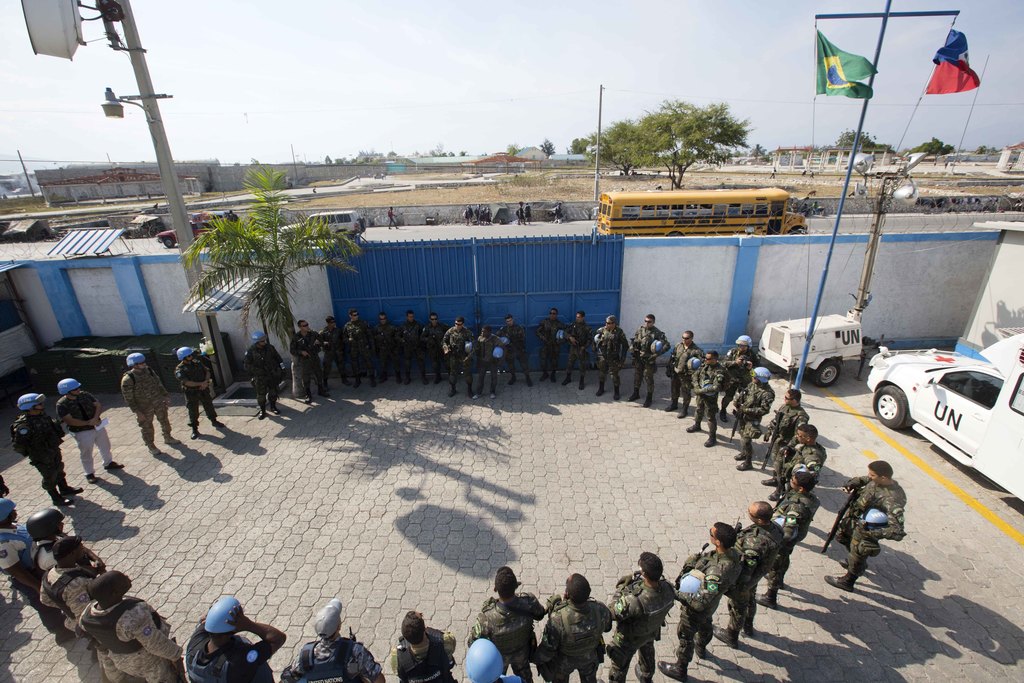 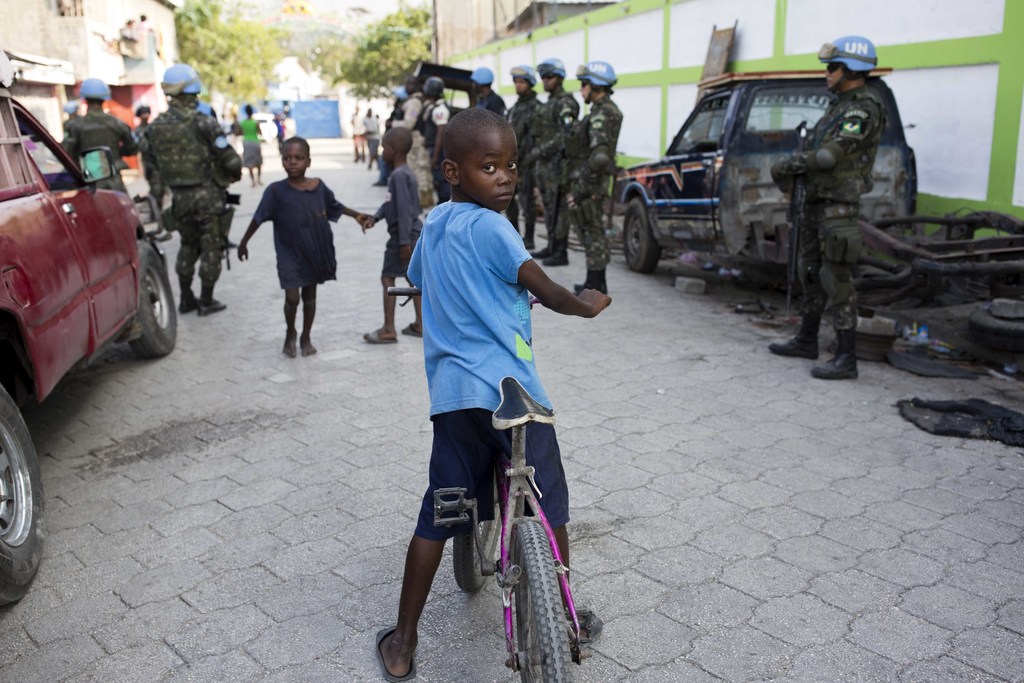 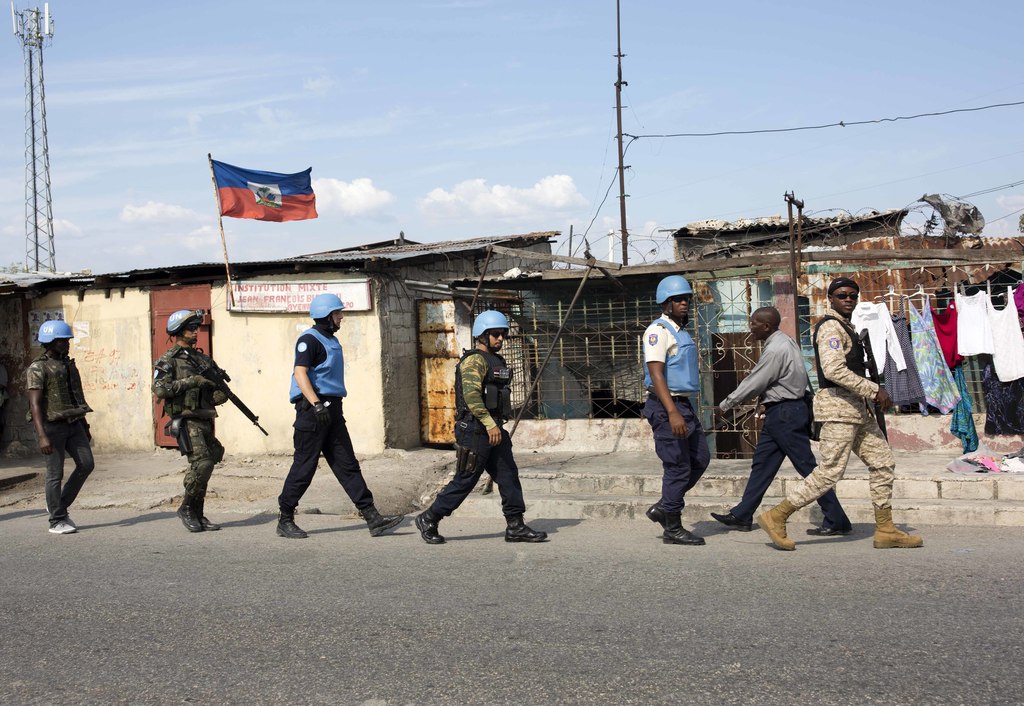 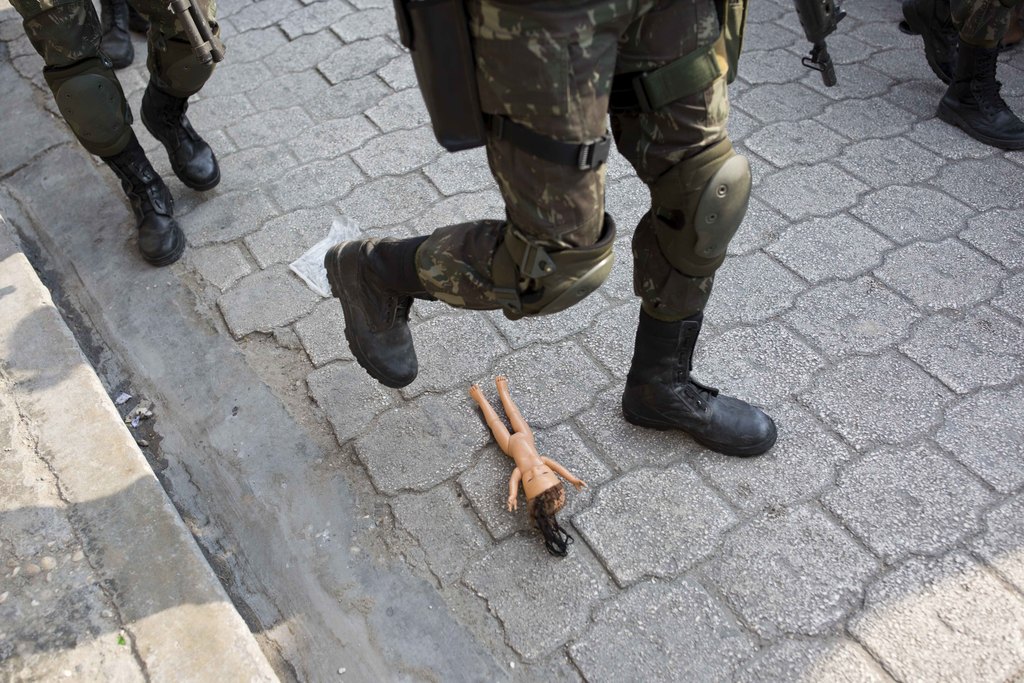 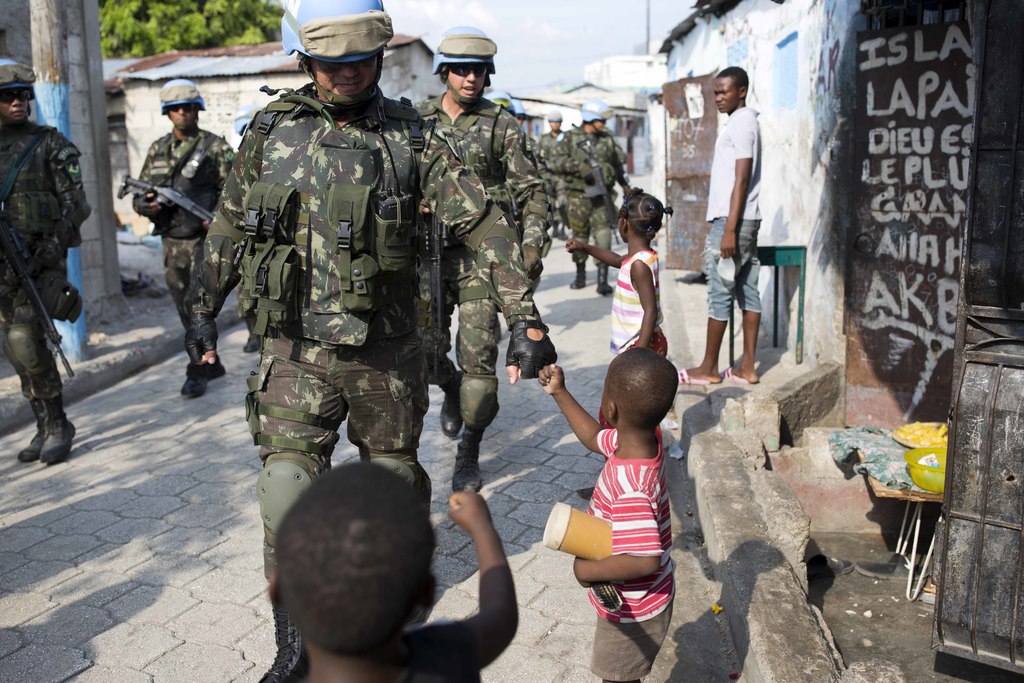 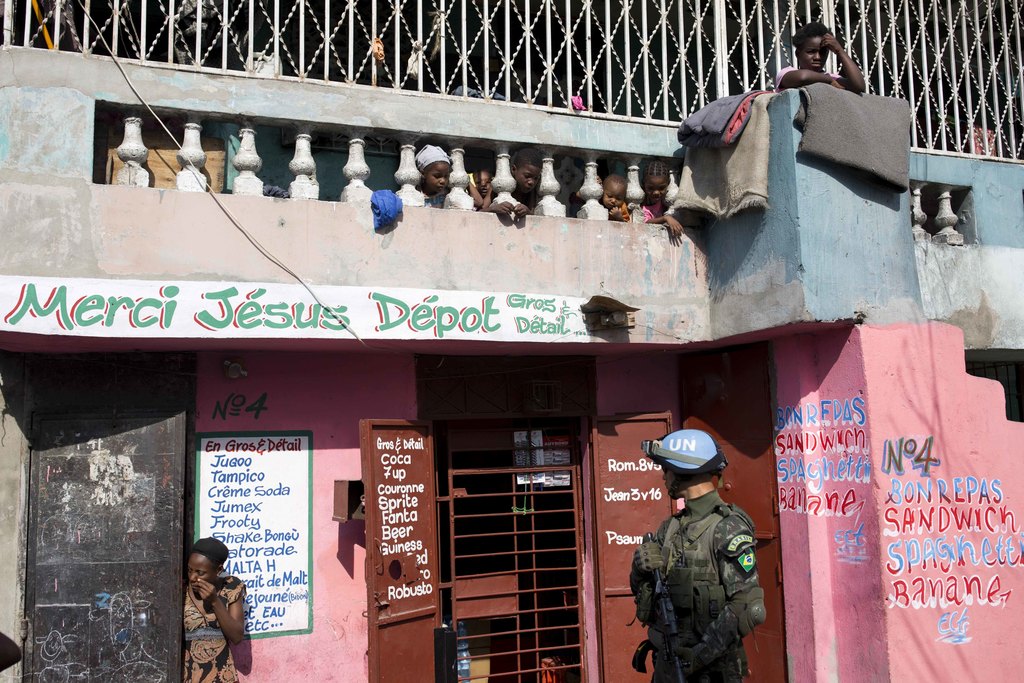 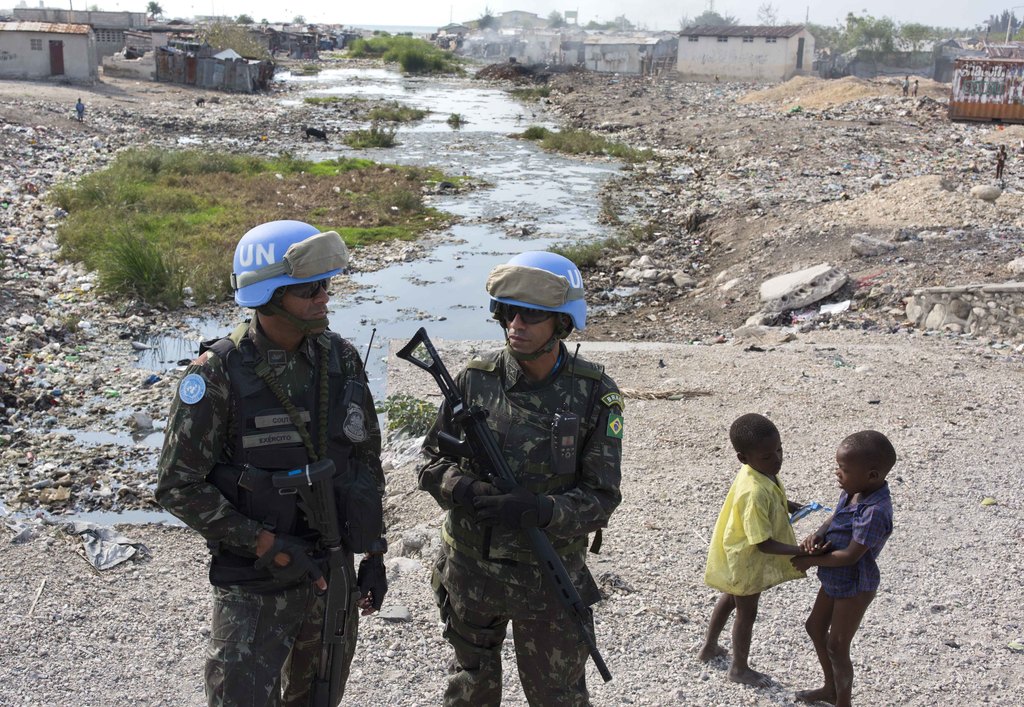 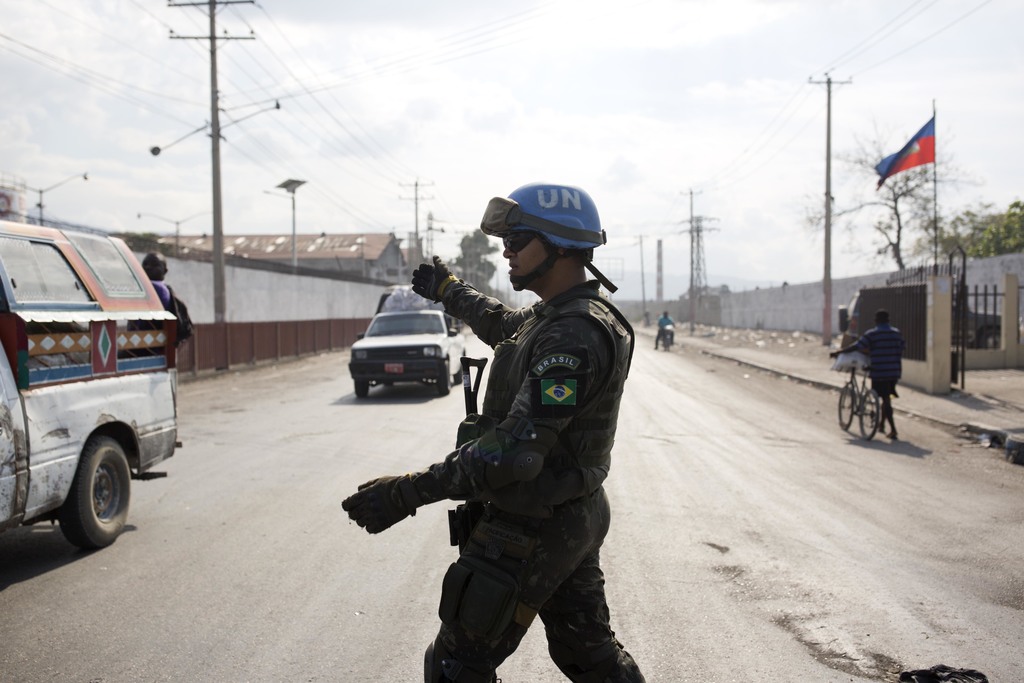 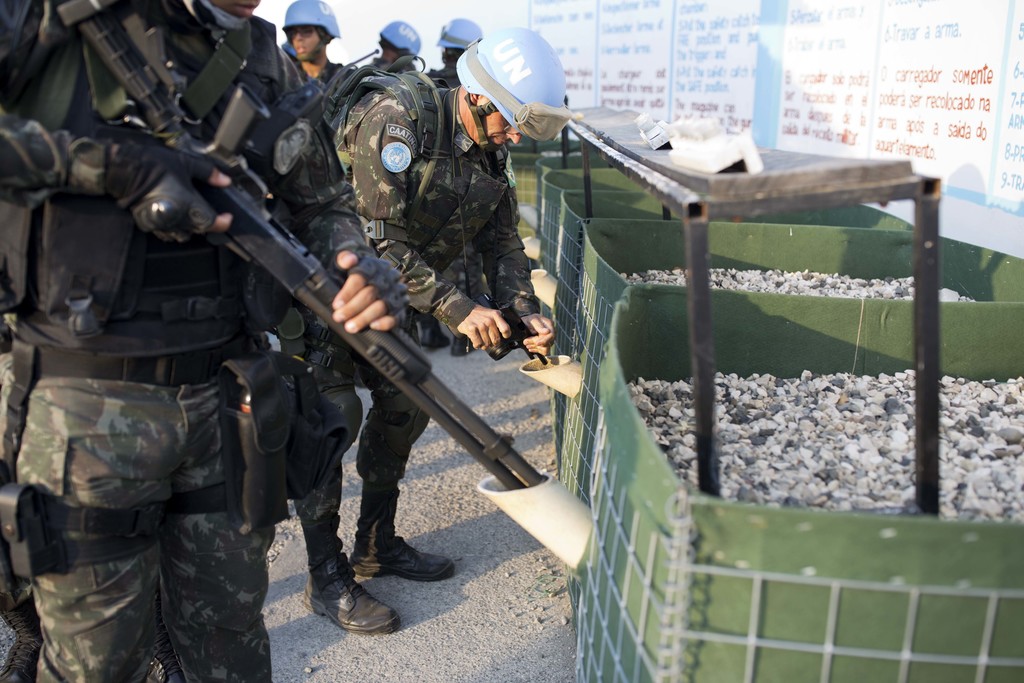 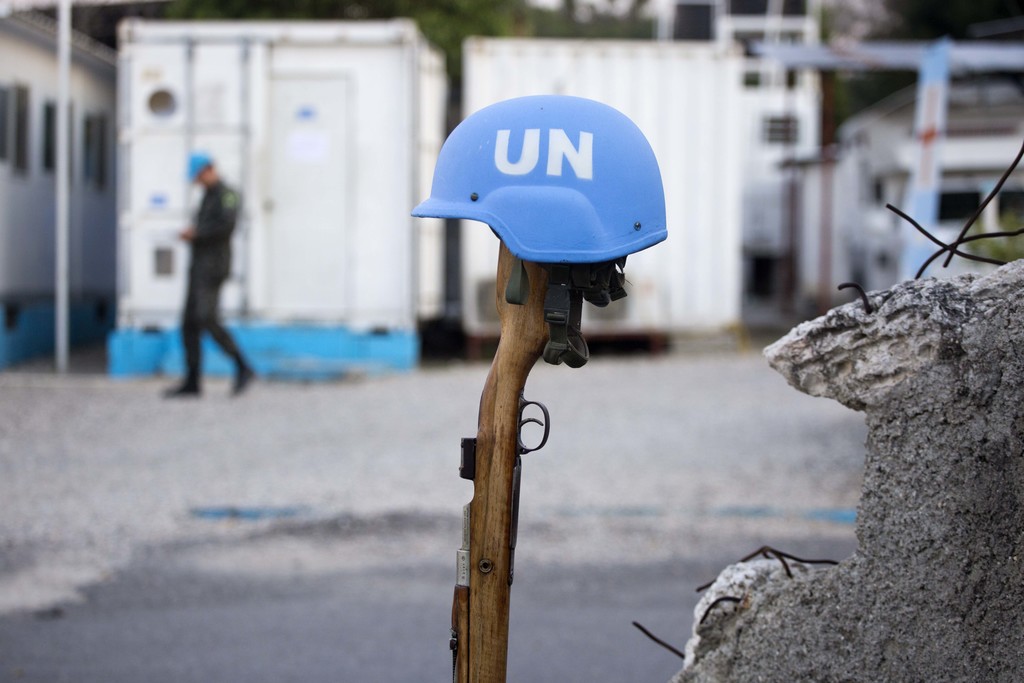 CITE SOLEIL, Haiti (AP) — A few dozen Brazilian troops wearing the blue helmets of the U.N. military force stroll through a dense warren of shacks in Haiti's most notorious slum, facing no greater threat than a few barking dogs along some of the same streets where pitched gunbattles between gangs and peacekeepers used to be a daily occurrence.

Years of easygoing patrols like the one on this recent afternoon in the steamy seaside district of Cite Soleil is a clear sign to many both in Haiti and around the world that it's time to wrap up a U.N. force that has been cycling through this Caribbean country since a 2004 rebellion engulfed Haiti in violence.

"We have a secure and stable environment," Col. Luis Antonio Ferreira Marques Ramos, deputy commander of the Brazilian peacekeeper contingent, told The Associated Press. "The important thing is to leave in a good way."

With a steady downsizing of Haiti peacekeeping operations in recent years and the U.S. administration of President Donald Trump pushing for cutbacks, the U.N. is looking at sending home 2,358 soldiers from 19 contributing countries, perhaps within months. U.N. peacekeeping chief Herve Ladsous said during a recent trip to Haiti that the military component "is likely to disappear in the relatively near future," though officials have not spoken publicly about the roughly 2,200 foreign police who accompany them.

Washington, the Haiti mission's main check-writer, is also applying pressure as it reviews all 16 U.N. peacekeeping missions. A diplomat, speaking on condition of anonymity because the conversations were private, has told the AP that the new U.S. ambassador to the United Nations, Nikki Haley, has spoken about winding up the Haiti peacekeeping operation, which is known by its French acronym, MINUSTAH.

"MINUSTAH in Haiti is a very good example of a mission that has basically done its job. So we'll be very happy for that one to close down," Britain's U.N. ambassador, Matthew Rycroft, said at a news conference at the world body's headquarters in New York.

The U.N. Security Council is expected to decide on a reconfiguration of the $346 million-a-year U.N. mission in mid-April after reviewing Ladsous' recommendations.

Still, sending troops packing does not mean the end of the United Nations Stabilization Mission in Haiti.

Operations such as UNICEF and the World Food Program also would remain. And analysts say officials are considering keeping the civilian staff in place along with a U.N. police component to continue building up and training the Haitian National Police.

"This would be unprecedented in U.N. peacekeeping history. Normally, police only serve in peacekeeping missions with military support and backup. But it's a creative option to reduce the mission's size and cost as MINUSTAH gradually works toward a full exit," said Aditi Gorur, who researches peacekeeping issues as a director of the Washington-based Stimson Center think tank.

The U.N.'s first-ever "stabilization" mission came to Haiti in 2004 following a rebellion that ousted President Jean-Bertrand Aristide and had the chronically troubled country on the brink of collapse. There were daily deadly clashes among gangs loyal to Aristide's faction, rebels and ex-soldiers, and rogue police. A wave of killings and kidnappings followed, aimed at destabilizing a U.S.-backed interim government.

For years, uniformed U.N. troops provided the only real security.

But these days, Haiti's police do most of the heavy lifting and the mood has changed. It took U.N. peacekeepers three years to gain control over the sprawling district of Cite Soleil, but it's now placid even though its residents still live in desperate poverty.

"The job was well done!" Brazilian Capt. Leandro Vieira Barboza told the Haitian officers during a pep talk following the joint patrol. "I'm sure after the mission ends your good work will continue."

Amid relative stability, Haitian lawmakers argue it is time for Haiti to finally manage all of its own security affairs.

"The government needs to negotiate MINUSTAH's departure as soon as possible," said Sen. Patrice Dumont, who represents the West department, which contains about 40 percent of Haiti's electorate.

But President Jovenel Moise and legislative leaders say the vastly improved police force is not enough. They want a real military to replace the army that was abolished in 1995 after a long history of coups and human rights abuses. They say a reconstituted army would create jobs, protect borders and assist during natural disasters.

But with coffers so depleted that many public workers aren't getting paid, creating a new military would require sustained international support, said Jake Johnston, a researcher for the Center for Economic and Policy Research in Washington.

But Kenneth Merten, the U.S. State Department's special coordinator for Haiti, said that "it would be difficult to imagine U.S. financial support for recreating the Haitian military."

On a recent day in Cite Soleil, home to over 400,000 people, a group of men sat in the shade and gazed at Brazilian soldiers stopping motorists at a checkpoint. They broke into laughter when asked about their political leaders' military ambitions. Weeks before leaving office in February 2016, then-President Michel Martelly passed a decree to reinstate the army, but a real one doesn't exist.

"Where are they going to get money to pay them? How do you think hungry Haitian soldiers are going to act?" said Jonas Nicolas, a baker who is old enough to remember military-sponsored deaths squads. "No, I like the U.N. guys with our police."

Other Haitians, however, see U.N. peacekeepers as an occupying force. "I don't like seeing foreigners with guns driving around my country," said Jean Acao, who sells snacks from a roadside perch.

The peacekeepers' tenure has been rocky. They have earned praise for boosting security, paving the way to elections and providing crucial support after disasters, particularly the devastating 2010 earthquake. But some troops have also been accused of excessive force, rape and abandoning babies they fathered.

They will undoubtedly be remembered most for inadvertently introducing recent history's deadliest cholera outbreak because of inadequate sanitation at a base used by Nepalese peacekeepers.

Some Haitians are bitter the lengthy peacekeeping experience hasn't met their expectations regardless of the fact that building up institutions and stabilizing fragile countries like Haiti can take a long time.

"Shouldn't Haiti be better after all these years of MINUSTAH and international support?" caterer Stevenson Belizaire asked as he walked past a trash-clogged canal.