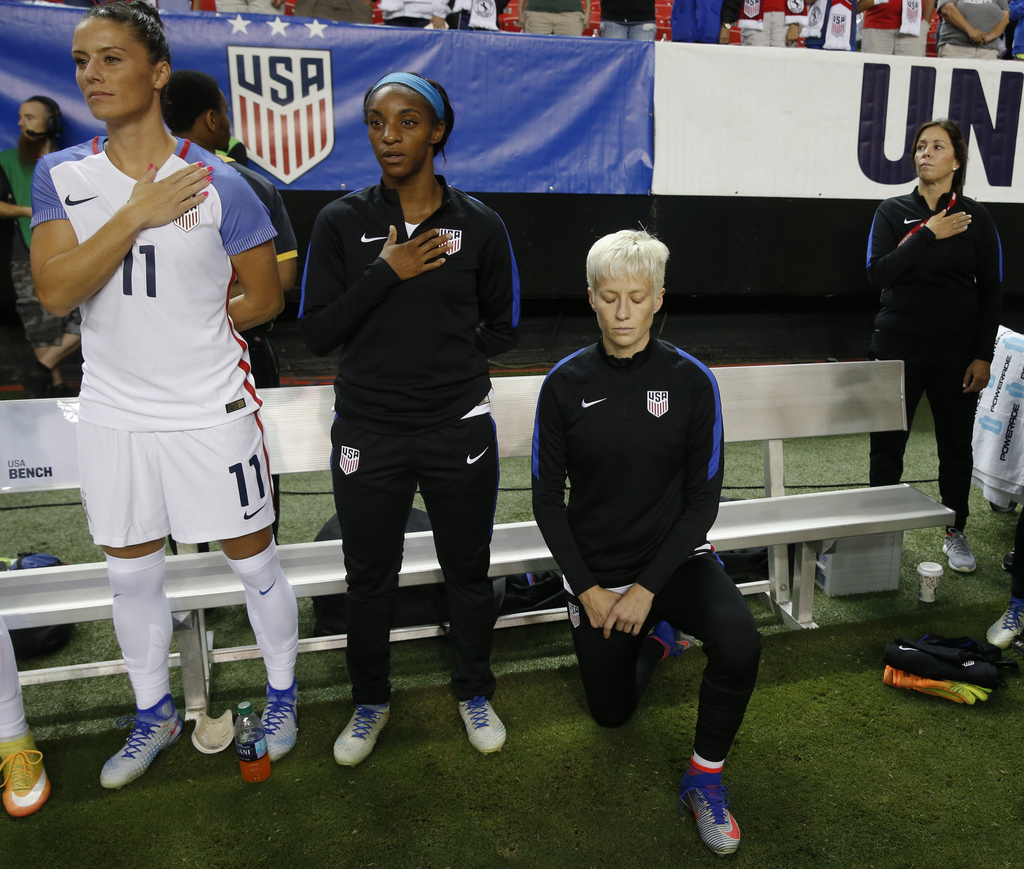 Colin Kaepernick is looking for work, after a season more memorable for what he did before the games than anything he did while in them.

What he's not looking to do, according to multiple reports, is to continue his national anthem protest wherever he ends up.

The more cynical might suggest those two things are related. And they just might be, though Kaepernick has yet to publicly explain why he's dropping a protest that got so much attention last season that some blamed him for a drop in NFL television ratings.

And just like that, the great national anthem protest movement appears dead.

It didn't live long, a few months at best. Several players followed Kaepernick's lead, but for the most part, they were a lot more preoccupied with keeping their day jobs than crusading for social reform.

For Rapinoe, the decision not to protest anymore was a fairly easy one. She was left off the U.S. women's national team for a major tournament this month and while it was ostensibly because she is still getting into form after tearing an ACL, her protests certainly didn't help her cause.

It is, after all, the U.S. national team. If you're making a living playing for your country, the case can be made that you'd better stand up for the national anthem.

"It is an honor to represent the USA and all that we stand for — to be able to pull on the red, white and blue to play a game that I love," Rapinoe said in a statement. "I will respect the new bylaw the leadership at USSF has put forward. That said, I believe we should always value the use of our voice and platform to fight for equality of every kind."

For Kaepernick, it might also come down to employment. He opted out of his contract with the 49ers and is now a free agent, though there are indications he could return to the team under a different deal.

Kaepernick accomplished at least part of his goal by taking a knee to protest racial and social injustice. It was probably the only way he was going to cut through the clutter and get a mainstream audience to notice what he was doing.

But it was always going to be short lived. The shock value wore off, and it lost its effectiveness. Other players who joined in for a week or two moved on to other things, like trying to remain employed.

To Kaepernick's credit, the protest was a small part of what he does. He took some of the money the 49ers paid him and donated $1 million to help local charities through the Colin Kaepernick Foundation, and he has hosted "Know Your Rights" camps for underprivileged children in the Bay Area.

He's also been a longtime supporter of Camp Taylor, a camp for kids with heart disease. The year he was in the Super Bowl, his father told me Kaepernick got on stage and sang for the kids during a day he spent at the camp.

"It was 'This Little Light of Mine,' a song he knew from Sunday School," Rick Kaepernick said. "He talked about looking out at those kids and knowing they were something special."

That Kaepernick has a right to protest is guaranteed in this country. That others have a right to vehemently disagree with his platform is also their right.

This was never Tommie Smith and John Carlos on an Olympic medal stand in Mexico City in 1968, a stance that reverberated throughout the nation. It won't be remembered a half century later as a landmark in the nation's history.

Indeed, one of Kaepernick's biggest mistakes was that he wasted the opportunity to fully articulate what he was seeking.

It became a vague thing, undefinable even for those looking for an answer. There was never going to be a clear-cut winner or loser, though it was clear that most NFL fans didn't like the idea of an anthem protest one bit.

So now it's back to work for Kaepernick and Rapinoe, assuming they will still be able to find jobs.

Any other work they believe needs to be done will have to wait for another day.