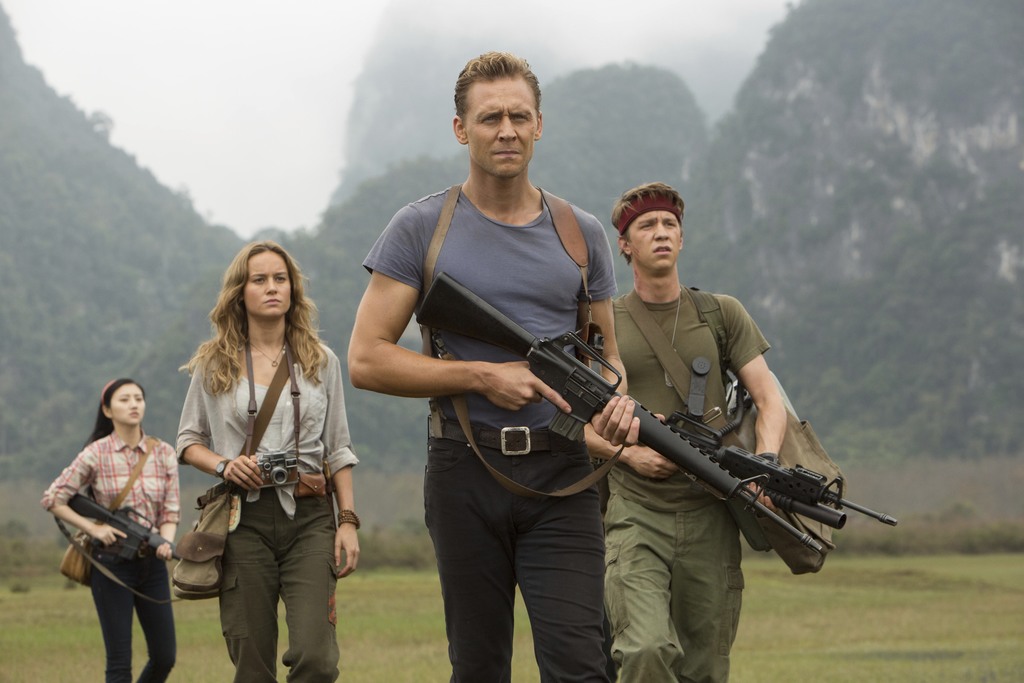 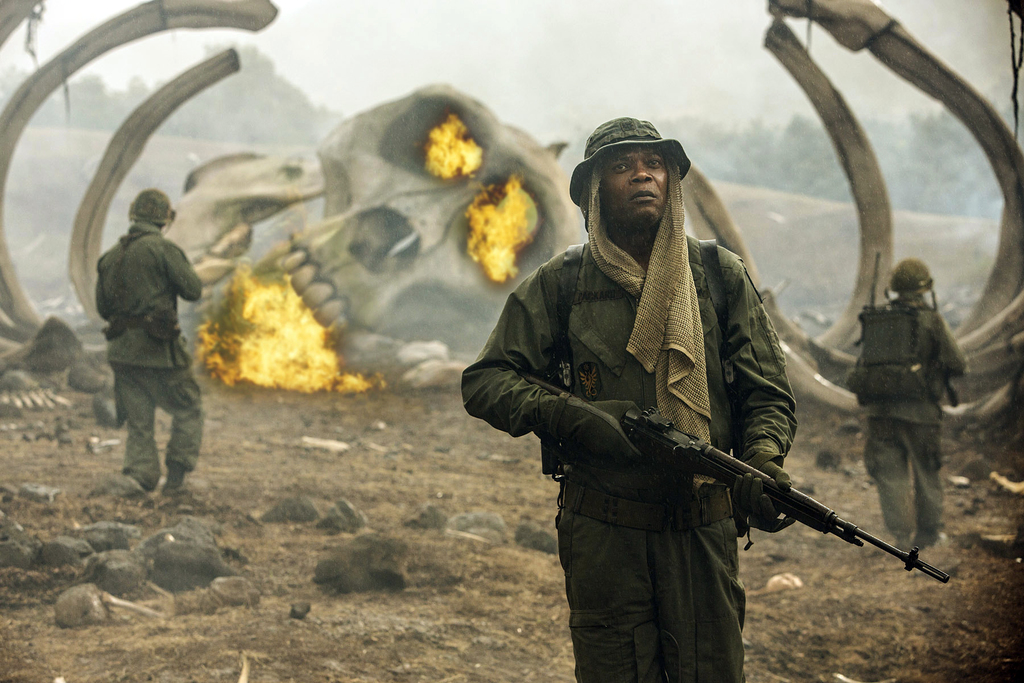 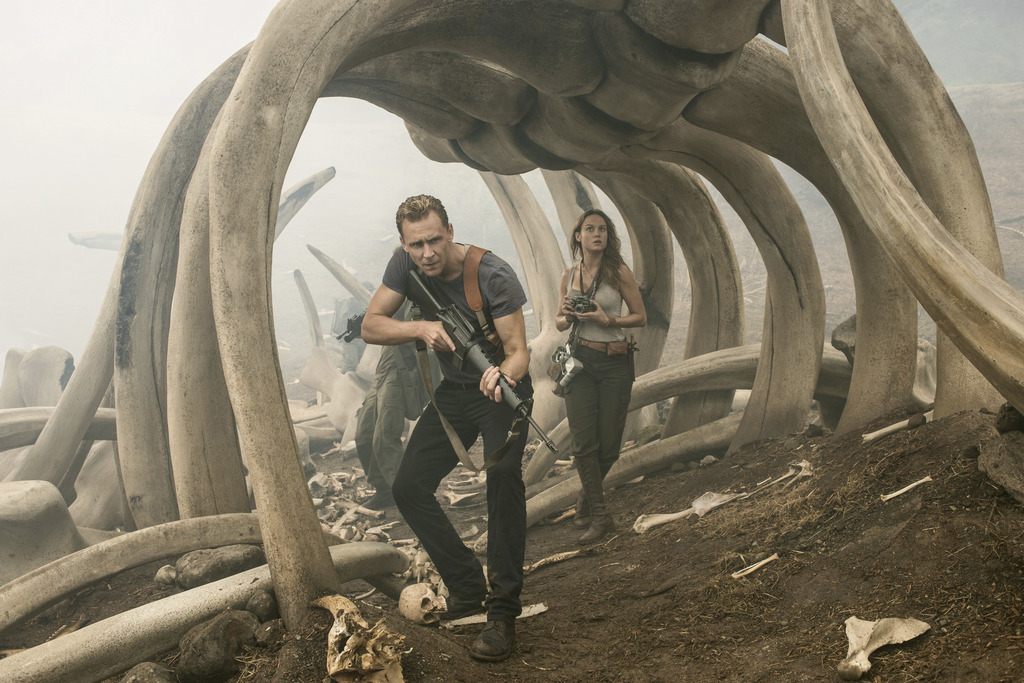 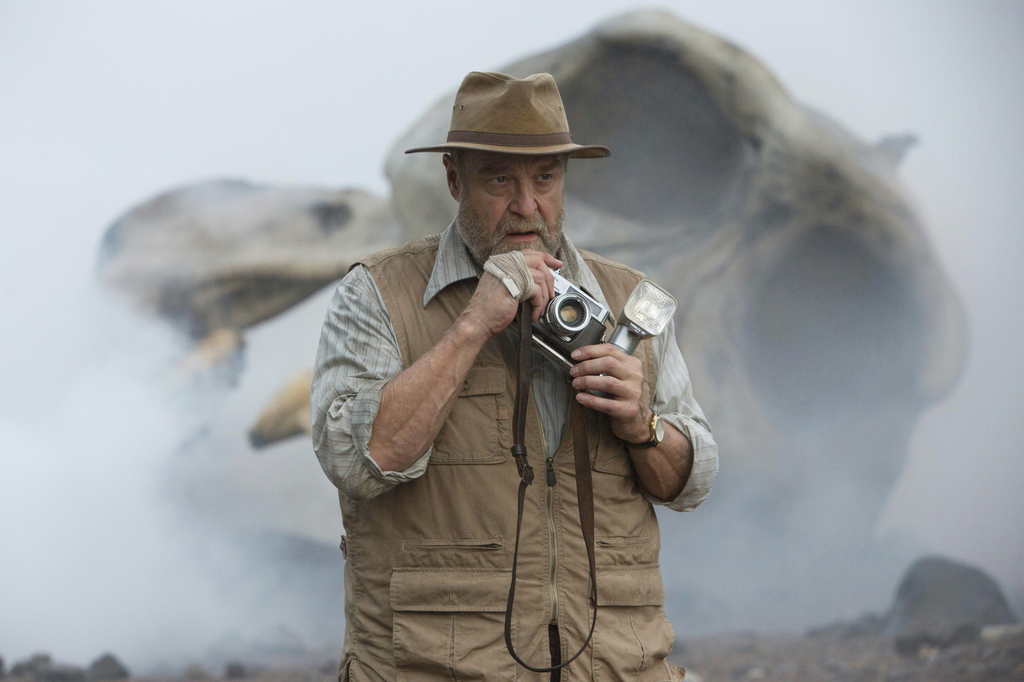 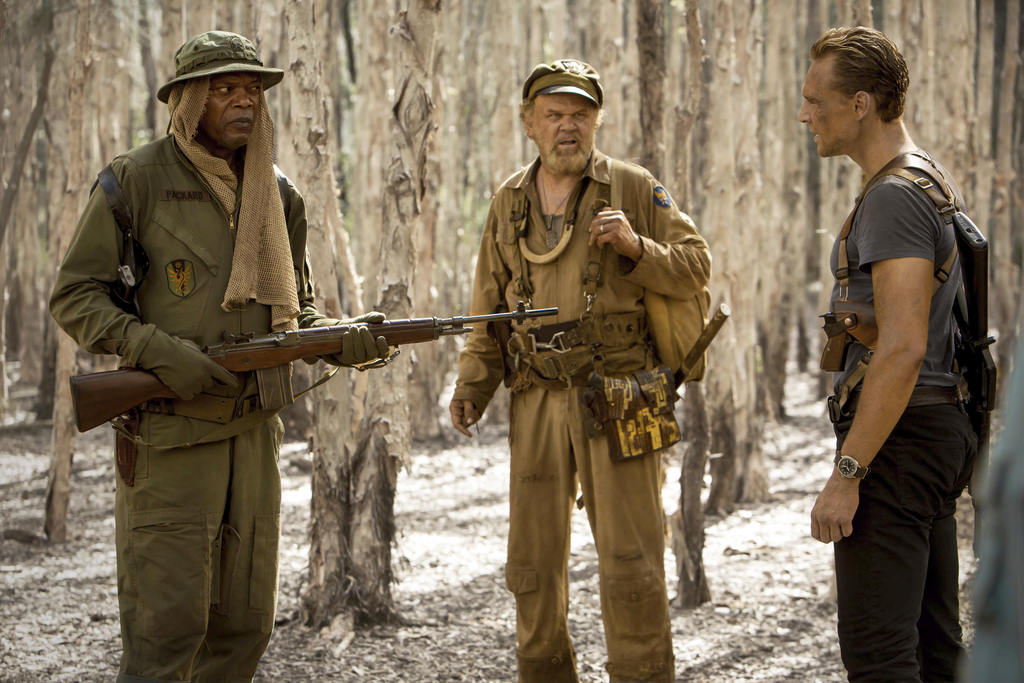 Not since Marlon Brando's Colonel Kurtz in "Apocalypse Now" murmured of "the horror" has such a brooding beast lurked deep within a war-ravaged jungle as the King Kong of "Kong: Skull Island."

Yes, the big ape is back, this time with a rollicking Vietnam War backdrop and the Creedence Clearwater-thumping soundtrack to match. The year is 1973, Nixon is pulling troops out of Vietnam and American explorer Bill Randa (John Goodman) has convinced a senator (Richard Jenkins) to bankroll a quick expedition on the way out to an uncharted South Pacific island where "myth and science meet."

Unlike Kurtz, we don't have to wait very long for our errand boys — a cobbled-together team lead by Lieutenant Colonel Packard (Samuel L. Jackson) — to encounter Kong on the exotic island. No sooner has their swarm of helicopters penetrated the island's permanently stormy perimeter is Kong swatting them away like flies, and the soldiers —fresh off the failed war — yet again find themselves in a gruesome quagmire.

What's a gorilla got to do with Vietnam? Well, that's the 800-pound metaphor in the room.

"Kong: Skull Island" is the latest in a long line of reboots going back to the 1933 original. The disappointment of Peter Jackson's lavish but bloated 2005 attempt pushed producers to explore some other kind of evolution for the chest-pounding primate. Director Jordan Vogt-Roberts (whose only previous feature was the indie comedy "The Kings of Summer") has uprooted the tale from its imperialist origins (beware of what you plunder abroad) and brought Kong in as a stand-in for the folly of Vietnam.

The shift, which follows a brief World War II preamble, gives "Kong: Skull Island" a strange and surreal energy. An "Apocalypse Now" with monsters is about as bizarre a fit as you'd expect. It is, at least, not the cookie-cutter monster movie it might have been, and Vogt-Roberts — who fills his movie with napalm gas, a chattering Nixon bobble head and fireballs in dense jungles — gleefully plunges into his cartoonish, digitally rendered heart of darkness.

The result is at turns grim and goofy. "Kong: Skull Island," penned by Dan Gilroy, Max Borenstein and Derek Connolly, is never quite sure which it wants to be, but Vogt-Roberts is having too much fun to care.

The team includes a British ex-spy (Tom Hiddleston, who tries to do little beyond handsomely smolder through the film), a self-described "antiwar" photojournalist (Brie Larson, mostly just running with the pack and, later, catching Kong's eye) and a handful of Vietnam vets under Packard's command.

The island, shot in Hawaii, is a verdant, mountainous paradise filled with not just Kong but other gargantuan creatures — a giant octopus, a long-legged spider — and, it turns out, John C. Reilly. He pops up as Hank Marlow, a WWII pilot downed on Skull Island decades earlier, whose long years there have left him a little nutty.

There's something here about the tragic sacrifices and wasted heroism of soldiers, used as pawns against the wrong foes. Jackson's Packard — a bloodthirsty cowboy who wants to stay in the rodeo — takes the mission as a happy reprieve from the peace time he fears, but his infantry men wish they could just go home.

Whereas Reilly's instinct is to lean into the movie's absurdities, Jackson (in fine, full-throated form) solemnly readies for a mano-a-mano showdown with Kong. By then, it has turned out that Kong isn't the real enemy, but Packard is undeterred. When others want to call in the cavalry, he glowers: "I am the cavalry!"

Ultimately, the film's Vietnam setting is less about warfare and history than finding an intoxicating canvas for a pretty old story. "Kong: Skull Island" is more about the monster clashes and, as the post-credit clip (a true commercial) proves, setting up future installments. A wider kaiju-verse is planned.

King Kong, like many before him, has merely been drafted into a war not his choosing.

"Kong: Skull Island," a Warner Bros. release, is rated PG-13 by the Motion Picture Association of America for "intense sequences of sci-fi violence and action, and for brief strong language." Running time: 118 minutes. Two stars out of four.