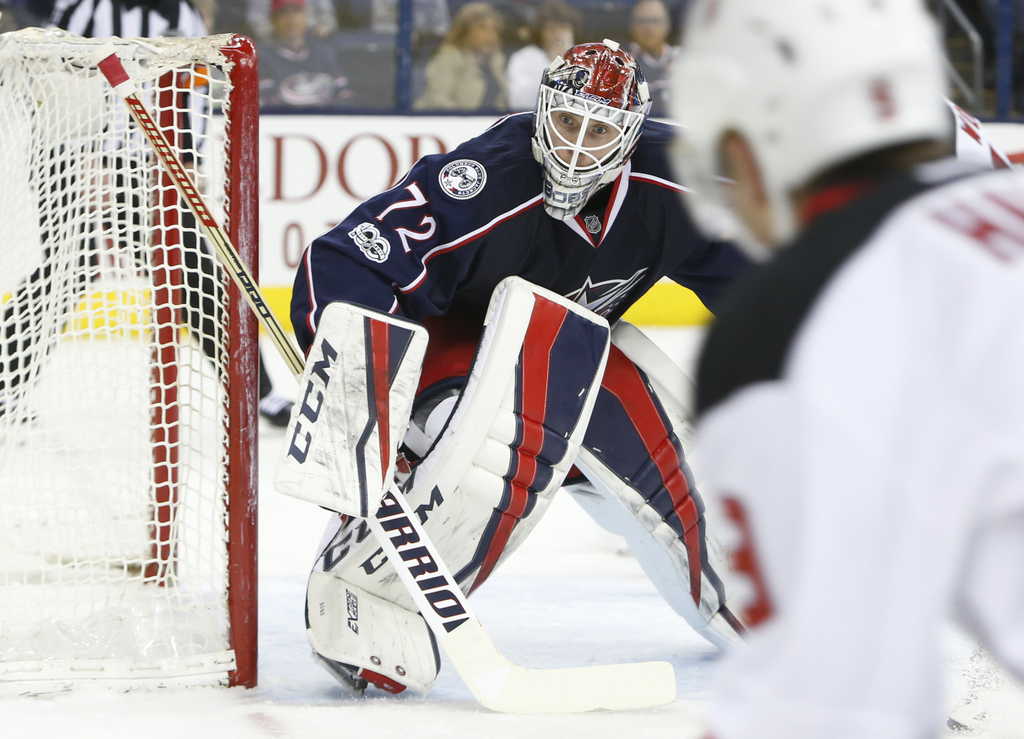 Bobrovsky shut out the Devils for the second time in three days as he made 20 saves in a 3-0 win on Sunday.

Tuesday's shutout was his career-high sixth this season. Bobrovsky has not allowed a goal since the Canadiens' Alex Galchenyuk scored in overtime on Feb. 28.

Oliver Bjorkstrand and Cam Atkinson scored third-period goals for Columbus, which leads Pittsburgh by two points for second place in the Metropolitan Division.

BUFFALO, New York (AP) — Radko Gudas had a goal and two assists, and the Flyers continued their late-season playoff push with a win over the Sabres.

Jordan Weal and Travis Konecny had a goal and assist each, and Claude Giroux scored to snap a 12-game goal drought and cap a three-goal second-period outburst. Matt Read also scored while Steve Mason stopped 31 shots.

The Flyers improved to 3-0-1 in their past four and vaulted ahead of idle Tampa Bay into 11th place in the Eastern Conference standings.

Jack Eichel had two goals and assist for Buffalo to extend the NHL's longest active point streak to 11 games.

Evander Kane had a goal and assist for the Sabres, who continued losing ground in the standings by dropping to 1-5-2 in their past eight. Robin Lehner stopped 24 shots and has allowed 24 goals in his past six games.

SUNRISE, Florida (AP) — Henrik Lundqvist made 43 saves to earn his 30th win of the season and lead the Rangers over the Panthers.

Nick Holden, Kevin Hayes, and Chris Kreider scored goals for the Rangers. Tanner Glass had a goal and an assist. Pavel Buchnevich added an empty-net goal.

Aaron Ekblad and Thomas Vanek scored for the Panthers and James Reimer allowed four goals on 19 shots before being replaced by Reto Berra with 6:46 left in the second. Berra, seeing his first NHL action since Dec. 9. 2015, stopped eight shots.

New York won its fifth straight road game and is 24-8-0 on the road while Florida has won just once in its past six home games.

TORONTO (AP) — James van Riemsdyk broke out of a scoring slump, and the Maple Leafs snapped a five-game losing streak with a victory against the Red Wings.

Alexey Marchenko and Nazem Kadri also scored for the Maple Leafs, who were 0-2-3 in their previous five games. Rookie Mitch Marner and Tyler Bozak each had two assists.

Gustav Nyquist scored twice for the Red Wings, while Henrik Zetterberg extended his point streak to seven games with an assist on both goals.

Allen was 10.5 seconds away from a second straight shutout before Wild center Mikko Koivu threw a puck on net from near the blue line which bounced past Allen.

Perron scored his 13th goal of the season and Tarasenko added his 29th of the season to help new Blues coach Mike Yeo to his first win against his former team.

Devan Dubnyk made 18 saves for Minnesota, which has lost two of its past three games.

Barrie also added two assists and Calvin Pickard had 25 saves for Colorado, which got a rare home win. The Avalanche are 9-21-2 at Pepsi Center and had lost 12 of their past 14 overall before rallying to beat the Hurricanes.

Justin Faulk scored for the Hurricanes and Eddie Lack stopped 22 shots. Carolina is 2-5-3 in its past 10 games and is tied with New Jersey for last place in the Metropolitan Division.

EDMONTON, Alberta (AP) — Anders Lee scored a pair of goals and the Islanders earned a victory over the Oilers.

Joshua Ho-Sang, with his first career NHL goal, and Andrew Ladd also scored for the Islanders, who snapped a two-game losing skid.

Zack Kassian scored for the Oilers, who had a two-game winning streak snapped.

The Islanders kicked off the scoring with 2:37 left in the first period as Ho-Sang scored on a power-play shot from the point that beat Oilers goalie Cam Talbot up high.

ANAHEIM, California (AP) — Patrick Eaves scored the only goal of the shootout in the fifth round, and Jonathan Bernier capped a 24-save performance with a perfect shootout in the Ducks' victory over the Predators.

Rickard Rakell scored the tying goal late in the second period for the Ducks, who rallied from a pair of two-goal deficits for a key victory in their playoff surge. Ryan Getzlaf had a goal and two assists, and Nick Ritchie also scored for Anaheim.

Filip Forsberg scored a short-handed goal and Pekka Rinne made 39 saves for the Predators, who have lost three straight.

VANCOUVER, British Columbia (AP) — Paul Byron scored at 1:13 of overtime and the Canadiens extended their winning streak to six games with a victory over the Canucks.

Torrey Mitchell also scored the Atlantic Division-leading Canadiens, who are 7-2 since head coach Claude Julien was hired. Montreal won 3-0 at home against the Canucks on Nov. 2.

Goalie Carey Price made 27 saves. He has a shutout and only five goals allowed in his past five games — all wins.

Michael Chaput scored for the Canucks, who had a modest two-game win streak snapped and are seven points back of St. Louis for the second wild-card spot. Vancouver goalie Ryan Miller made 36 saves.