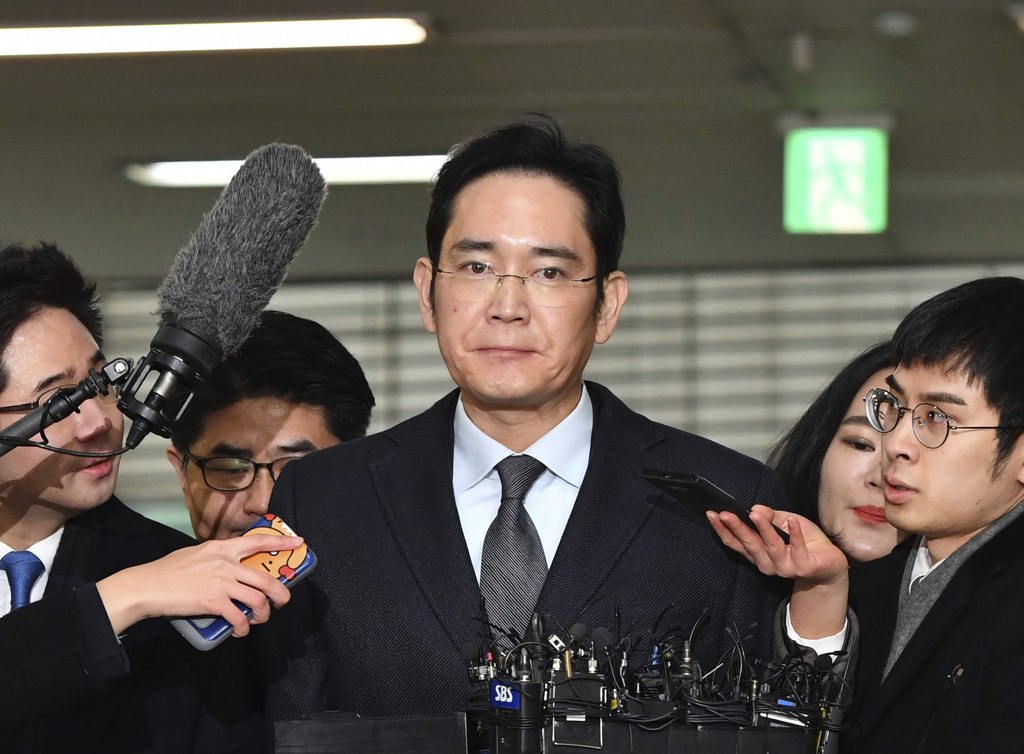 He is charged with, among other offenses, offering bribes to President Park Geun-hye and a close friend of hers to strengthen his control over Samsung, the conglomerate founded by his grandfather that is South Korea's largest and most successful business. Four other Samsung executives will also stand trial.

Documents from special prosecutors detail allegations that Lee and his aides used Samsung corporate funds to purchase expensive horses for the equestrian daughter of Park's friend Choi Soon-sil. They also say the presidential office pressured the national pension fund to facilitate a father-to-son leadership succession at Samsung in exchange for 43.3 billion won ($38 million at current exchange rates) from Lee.

Samsung says it did not seek any favors and it denies any wrongdoing. "Future court proceedings will reveal the truth," it said in response to the documents prosecutors released Monday. Below are issues that Lee and prosecutors will be contesting at court, and Samsung's responses.

IS LEE A BRIBERY SUSPECT OR VICTIM OF COERCION?

Prosecutors believe Lee and other Samsung executives gave or promised to give the $38 million to four entities controlled by Choi as a form of bribery. Samsung will likely contend it was coerced into giving the money.

About half of the $38 million went to two nonprofit foundations and a winter sports center under Choi's control that purport to support Korean cultural and sports activities. Samsung promised to give $19 million to the German-based sports agency that oversaw the equestrian training of Choi's daughter. Before the scandal unfolded, Samsung paid 6 million euros out of the promised amount, which in part covered the costs of the horses for Choi's daughter. Prosecutors believe that in transferring the 6 million euros to the German-based company Samsung forged documents and falsely reported to a bank that it was transferring the funds to pay for equestrian training for a Samsung Electronics corporate team. They allege the company concealed proceeds from criminal activities of bribery and embezzlement and hid assets overseas, a crime punishable by a minimum of 10 years in prison and a maximum life sentence.

Prosecutors believe that President Park was Choi's accomplice in alleged influence peddling. Park denies that. She is waiting for the Constitutional Court's ruling on whether to uphold her impeachment, which could be announced as soon as this week.

In a parliamentary hearing in December, Lee denied seeking any favors but did not deny transferring the money to Choi's foundations and the sports agency.

Samsung said it disagrees with the findings of the prosecutors and says it has not paid bribes or improperly requested favors.

Prosecutors allege that 29.8 billion won ($25.8 million) of the money given to Park and Choi was embezzled from Samsung Electronics and other Samsung companies. Embezzling more than 5 billion won ($4.3 million) is punishable by at least five years in prison. Prosecutors believe that funds of other, smaller Samsung companies such as Samsung Life Insurance, South Korea's largest life insurer; Samsung C&T; Cheil Worldwide and two other Samsung companies were donated to entities controlled by Choi. Samsung has not confirmed or denied if any funds were embezzled.

WHY WOULD SAMSUNG GIVE MONEY TO CHOI?

After Lee's father, Samsung Chairman Lee Kun-hee, fell ill in May 2014 and became unable to lead the company, the company stepped up business dealings, including an initial public offering and mergers of some Samsung companies, to help smooth the father-to-son leadership succession. The younger Lee's handicaps in controlling South Korea's largest business group were his less-than-1 percent stake in Samsung Electronics and his lack of a strong track record. Instead of buying more Samsung Electronics stock, Lee Jae-yong gained greater control through a merger of Samsung C&T and Cheil Industries in 2015 that was helped by support from the pension fund, a key investor.

Samsung was also dealing with regulators' efforts to rein in the power of big businesses that traditionally have dominated the economy. Such moves include banning expanding cross-shareholdings that the Lees and other founding families have used to wield outsized control of their business empires despite holding only minority stakes in those conglomerates.

Prosecutors allege Samsung was seeking help from the president, from Choi and from the national pension fund on such regulatory issues. They point to evidence in notebooks of a top presidential aide who scribbled down messages from the president. Samsung has denied that it sought or received any such favors.

PARK'S ROLE, IF ANY?

Prosecutors allege that before a July 2015 shareholder vote on the deal, Park ordered three senior presidential aides to ensure a merger of Samsung C&T and Cheil Industries would succeed. They say that pressure caused at least 138.8 billion won ($120 million) in losses for the National Pension Fund. Park's message was conveyed to Moon Hyung-pyo, then chief of the health ministry overseeing the National Pension Service, and Hong Wan-Sun, then chief investment officer at the pension fund, which was the biggest investor in Samsung C&T. Moon has been indicted for misuse of power, pressuring pension fund officials to support the merger and lying under oath. Hong was charged with breach of trust. The National Pension Service's support helped Samsung narrowly win shareholder approval.

External advisers had recommended that the pension fund oppose the merger, saying it was unfair to C&T investors. Prosecutors say pension fund officials were pressured to fabricate a report showing that gains from the merger would outweigh losses.