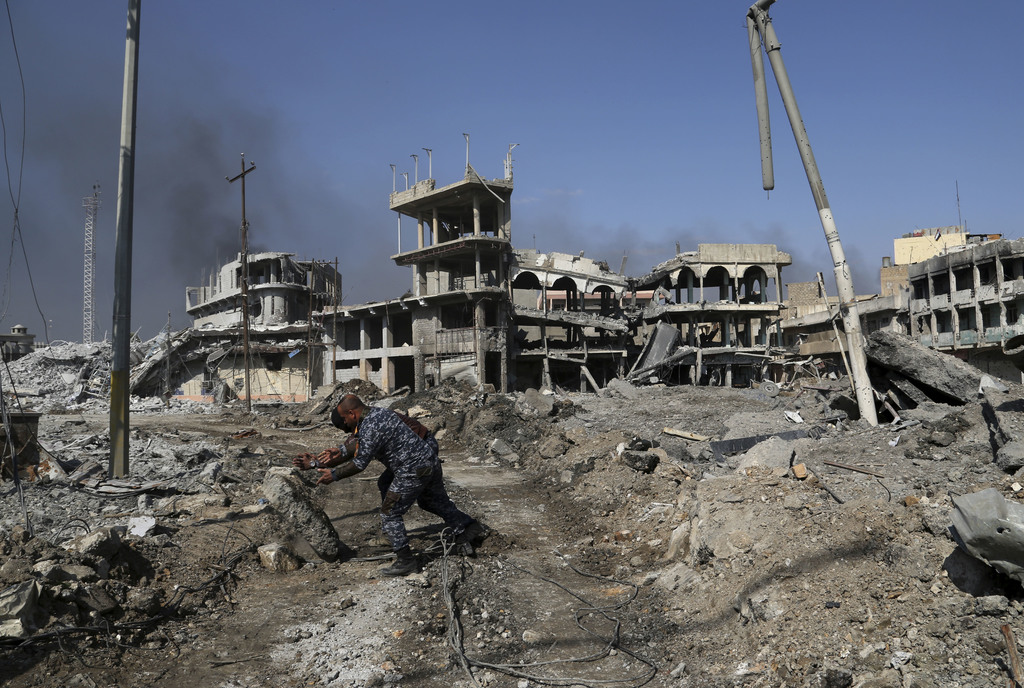 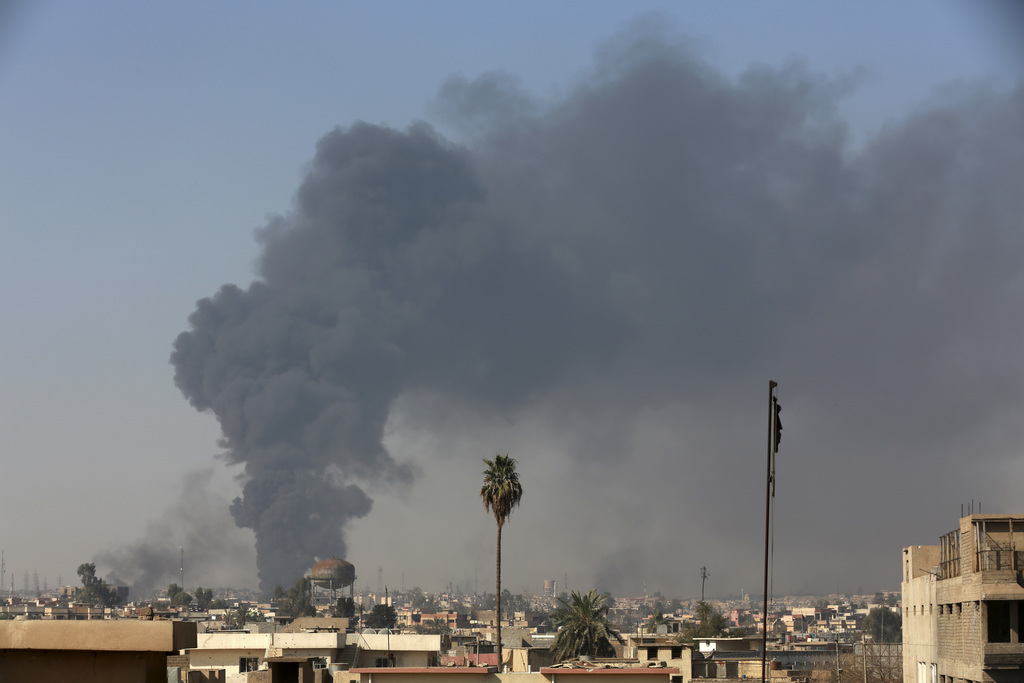 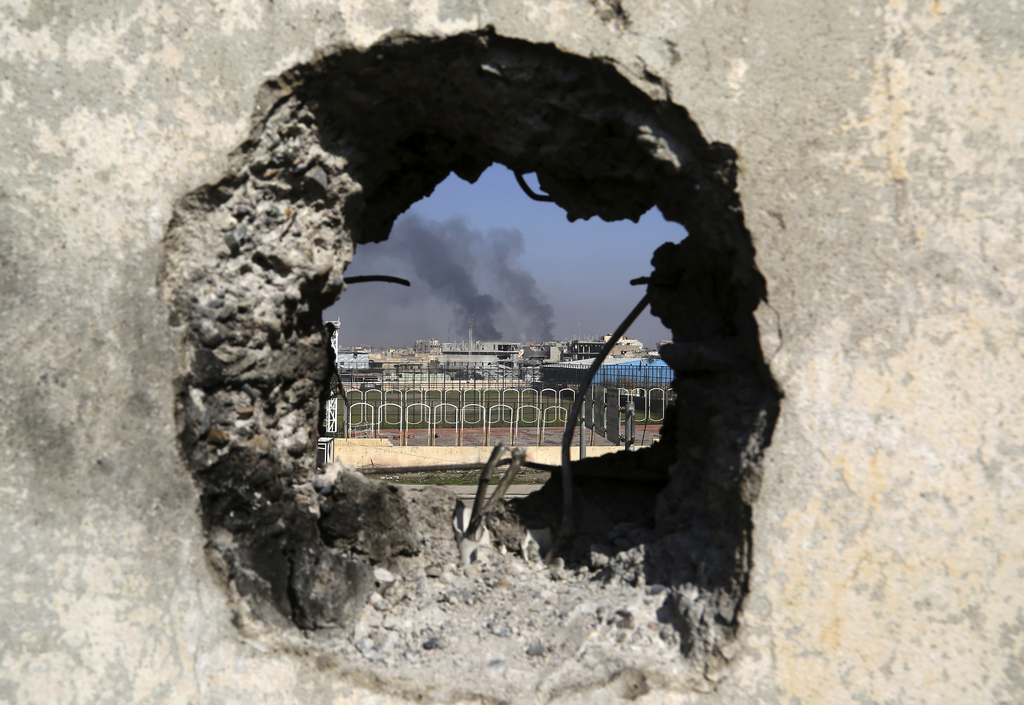 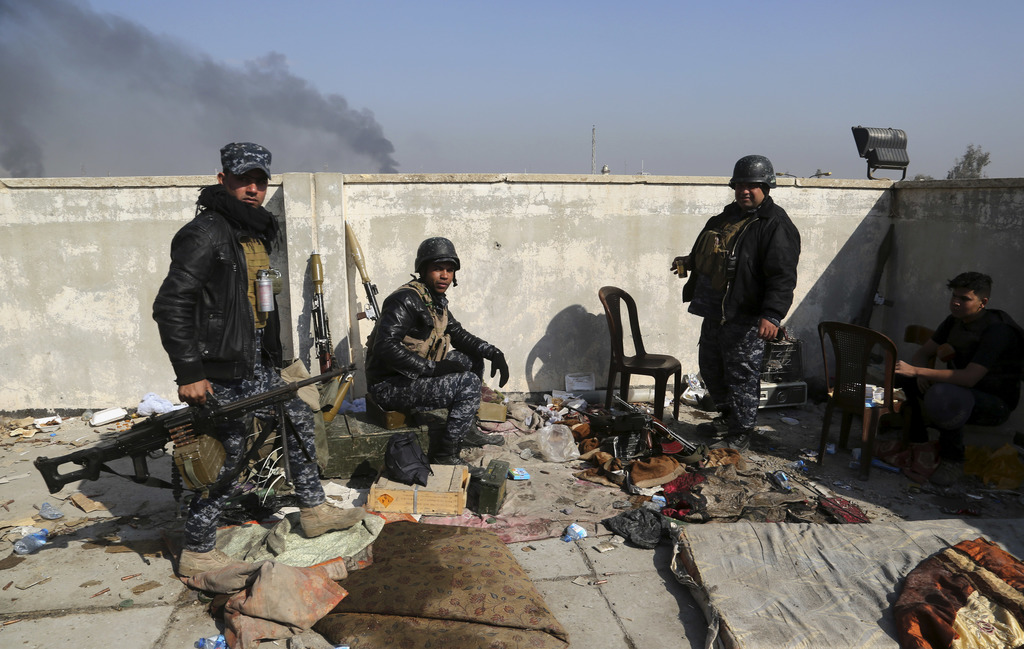 "Daesh had everything planned," said Hamza Dauoud of the Federal Police who helped rush his injured comrades out of a battered Humvee and onto stretchers in the garden of an abandoned building.

"As we first advanced there was no resistance (from the Islamic State group), but once we entered, they woke up," Daoud said, explaining he was only able to get out by ramming through a makeshift roadblock.

"We were stuck there, nothing could reach us. I barely escaped. The snipers hit my car twice but I never touched the brakes once," he said.

Iraqi forces launched a daring nighttime raid in the early hours of Tuesday morning on the sprawling complex of municipal buildings in western Mosul along the Tigris River. Beginning just after midnight, Iraq's emergency response division, an elite arm of the Federal Police, led the attack. Initially advancing some half a dozen blocks past the front line in armored vehicles, but breaching the complex itself on foot.

After facing very little resistance, regular Federal Police units followed and by 6:30 a.m. Tuesday morning an Iraqi flag had been hoisted above the tallest government building.

From the roof of an abandoned school acting as a forward base on the edge of Mosul's Tayran neighborhood, Maj. Gen. Ali Alami said the Nineveh governorate complex burning on the horizon behind him was liberated and fully cleared.

He traced his troops' advances on a tablet showing a satellite map of Mosul — boasting of their quick progress — but the markers showed that the soldiers has just pushed up the two main roads leading to the complex and hadn't cleared the dozens of tightly packed homes on either side.

Lt. Gen. Abdul-Amir Rasheed Yar Allah, who commands army operations in Nineveh province, praised the Federal Police as heroes and Brett McGurk, the special envoy for the U.S.-led anti-IS coalition hailed the advance in a statement posted to Twitter.

But by 11:00 a.m. clashes inside the compound had intensified and commanders behind the front were getting frantic radio calls for help. Three bulldozers had broken down trying to remove roadblocks, hundreds of troops were trapped and they needed reinforcements.

Sgt. Azam Ibrahim of the Federal Police was one of the first to enter the complex, but he and most of his unit fled as the first wave of counterattacks intensified. In the confusion he dropped his side arm before speeding back to his base.

"All of a sudden (IS fighters) began popping up everywhere," he said, "they emerged from nowhere."

Snipers began to fire down on Iraqi forces from the buildings above and previously concealed suicide car bombs rammed their convoys. Ibrahim said he was trapped in the complex for hours as IS fighters moved out from un-cleared neighborhoods and cut the routes his forces used to enter.

Commanders said the hasty advances were intended to give them the element of surprise, but the blunder shows how Iraqi forces continue to struggle with conducting methodical urban operations under political and military pressure for a speedy wrap up to the Mosul war.

The fight for Mosul's west is expected to be the most difficult yet for Iraq's military. The operation to retake the city was launched in October and in January the eastern side was declared fully liberated.

Initial advances in Mosul's western neighborhoods have been slow as Iraqi forces attempt to conduct simultaneous operations that force IS to spread out their defenses.

As IS counterattacks on the municipality ballooned, Iraqi forces responded with artillery Tuesday. A pair of helicopters fired down onto the complex and airstrikes could be heard throughout the day. The sky above the municipality filled with thick black smoke.

Civilians trickled out of the area carrying their possessions in overstuffed suitcases.

"The situation is not good honestly, there is so much destruction," Iman Issam said as she fled with her teenage daughter.

By afternoon, Federal Police units were being sent from the Tayran base to try and free the hundreds of troops in and around the municipality buildings and the front line clinic was receiving casualties in waves.

As one Humvee arrived, two men were pulled from the backseats, their uniforms soaked through with blood. Both were suffering from gunshot wounds. One man had been shot in the leg, the other shot twice in his side causing major bleeding.

The man shot in the side had been hit while trying to drag an injured friend to safety. Medics bandaged his wounds and hooked him up to an intravenous drip, but within minutes he died. Four doctors lifted him into a dark blue body bag and moved him to the ground. A fellow solider piled the man's uniform and boots beside his body.

Speaking from just outside the municipality complex, Federal Police Brig. Gen. Fakher Al Bahadri said he ordered his forces to quickly push deep into Mosul and take the municipality buildings in order to "surprise" the enemy and overcome obstacles posed by western Mosul's terrain. The city's west is much more densely populated than the east and streets are narrow, preventing Iraqi forces from largely fighting from inside their armored vehicles.

"The plan was stupid," Dauoud, the Federal Police solider who brought two casualties to the clinic Tuesday afternoon, said. "I don't know why we did that."