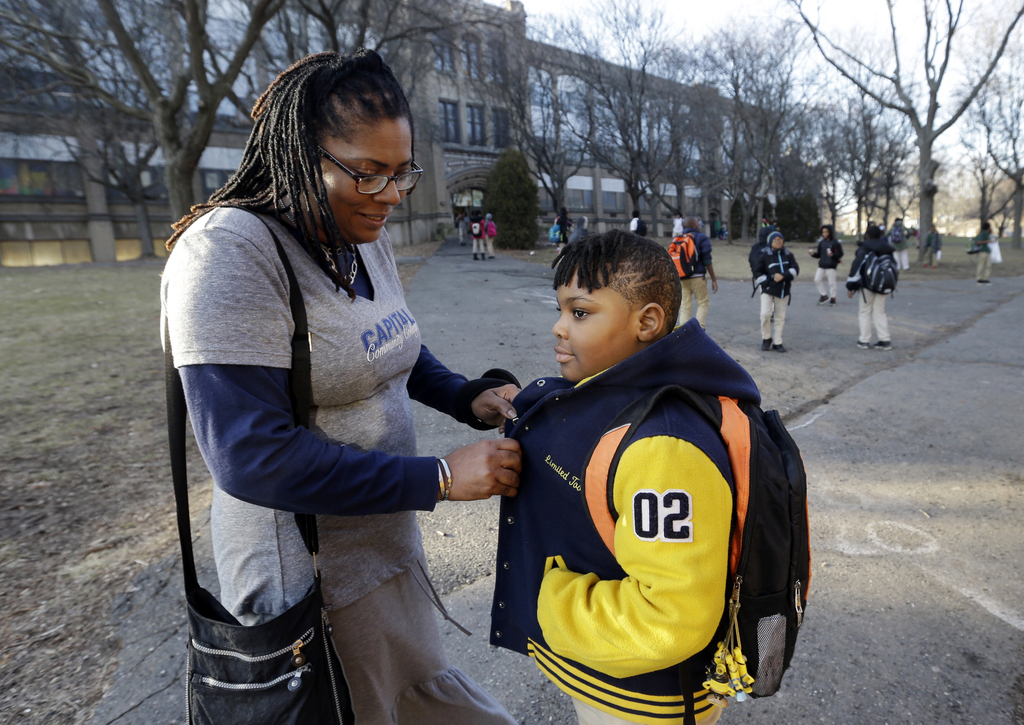 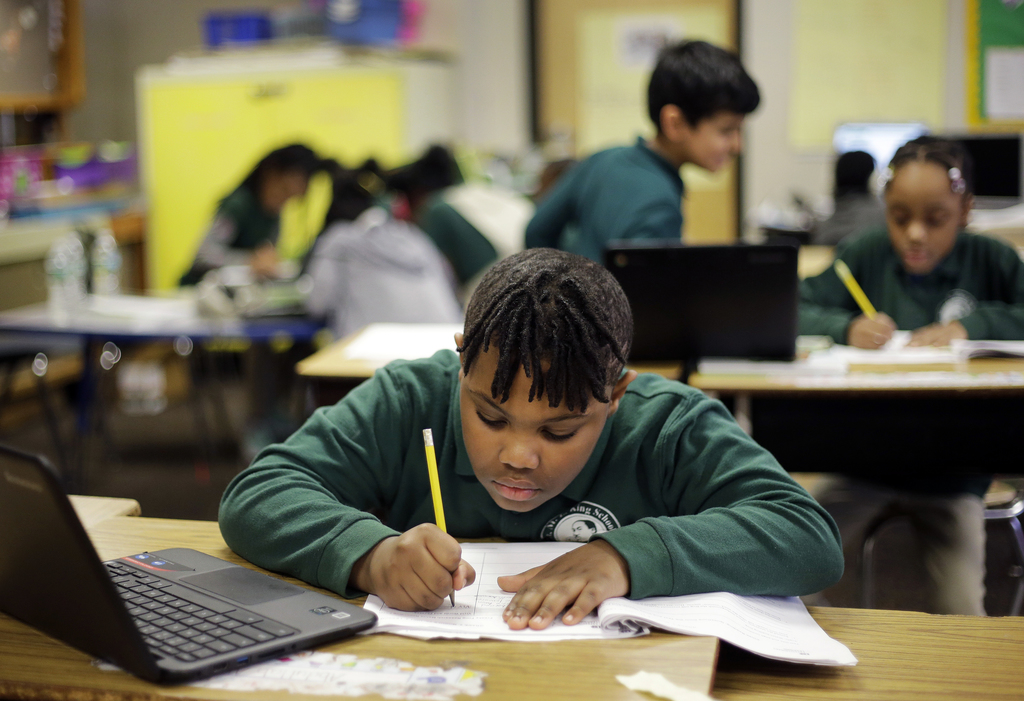 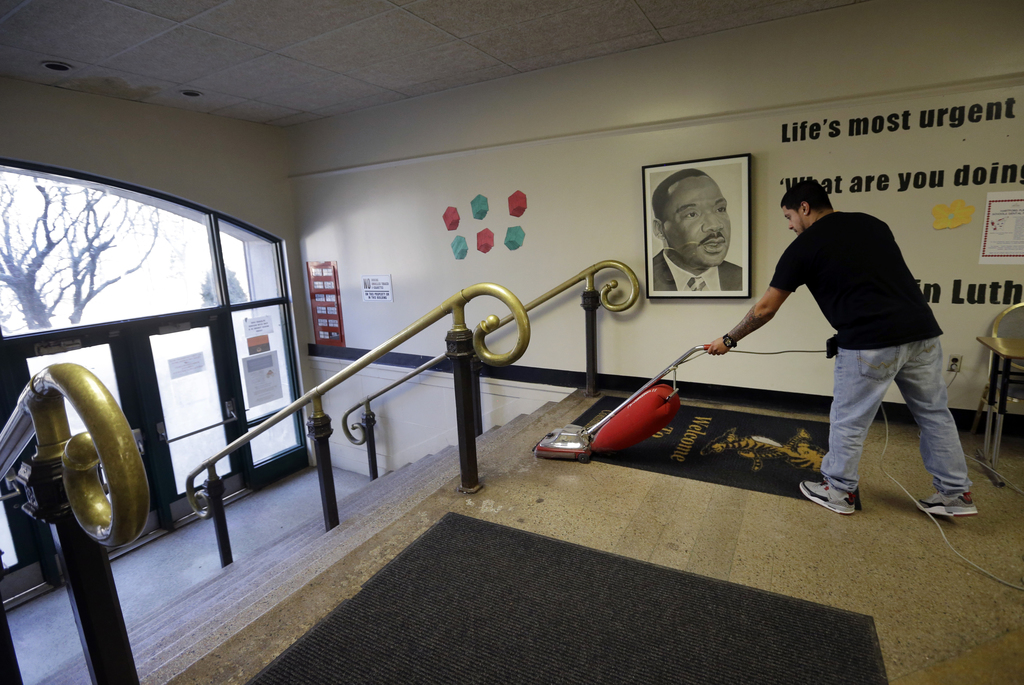 HARTFORD, Conn. (AP) — Hailed nationally as a success story on school choice, Hartford in the two decades since a desegregation order has seen growing racial integration and new levels of academic achievement. That is, at least for students who win seats at magnet schools through a lottery.

Traditional public schools still educate about half the city's children, but they are not moving in the same direction. The schools serve disproportionately more students from disadvantaged backgrounds, have lower graduation rates and their racial isolation remains as severe as ever.

With U.S. Education Secretary Betsy DeVos stressing alternatives to traditional public schools, Hartford illustrates a key challenge: how to manage the loss of students, and the funding that goes with them, for the schools and communities left behind.

The disparities pain parents like Natalie Langlaise, whose 8-year-old son Justin attends the dilapidated Martin Luther King Jr. Elementary School. A proposal to shutter the hollowed-out, 1920s-era Gothic hilltop school building has only heightened a sense of neglect among many in the poor, largely African-American neighborhood.

"School days are supposed to be happy days," Langlaise said. "It's like, 'Come on man, our kids deserve it, too.'"

A poor city in a wealthy state, Connecticut's capital city responded to the 1996 Sheff v. O'Neill desegregation ruling with market-oriented solutions. The legislature created a network of magnet schools and school choice options to attract a mix of city children and suburban whites. The lottery system was needed because of strong demand for the new options, but critics complain it reinforces a two-tiered system, with one for traditional public school kids and another for those at their school of choice.

In the aggregate, officials say, students today are better off. The graduation rate for the 21,000-student Hartford Public Schools system has risen from 29 percent to 71 percent. While the improvements have not been evenly shared, Hartford School Board Chairman Richard Wareing likens the moral dilemmas of school choice to those posed by the board game Lifeboat.

"I know I'm helping somebody, but if somebody else is being left behind, how do I decide?" he said. "Is it the greatest good for the most people? For the most promising? For the most marginalized?"

The lottery and investment in magnet and charter schools have been sore subjects in some corners for years, but the tension became more visible in protests over the push to close the MLK school, which fell into disrepair. The district agreed to leave it open at least another year, but last fall consultants also suggested closing it, along with other north end schools, based on factors including academic performance and shrinking enrollment.

The Rev. Maurice Porter, of the nearby Shiloh Baptist Church, has begun addressing in his preaching and Bible studies the injustices he sees in local schools. While families of students who win a seat through the lottery at Capital Preparatory Magnet School feel as though they got into Harvard, he sees others stressed by a shortage of options.

"The system is tainted," he said.

Langlaise, a single mother and college student, enjoys the sense of community at the MLK school. But for her it's not just the state of the building that shows neglect. At a school that relies on donations from churches and community groups for things like tissues, winter clothing for disadvantaged kids and after-school care, she sees it in the absence of art clubs, dance classes or other offerings beyond the basics.

"I love the idea of magnets and charters," she said. "But I want a win-win."

Nationally, the Hartford experience echoes that of many other American cities including Los Angeles, Philadelphia and Detroit, where enrollment in traditional public schools has been dropping due partly to students leaving under school choice. Although enrollment at the MLK school, for one, is only about half of what it was a decade ago, it doesn't cost any less to maintain the campus.

The needs of the students, many living in extreme poverty, also weigh heavily on the neighborhood schools. A self-selecting group applies through the lottery, and special needs students and English language learners do not pursue seats at the magnet schools in the same numbers as others.

And while the award-winning magnets have succeeded in creating alternatives to low-performing, segregated schools, the high percentages of blacks and Hispanics concentrated in neighborhood schools have barely budged. From 2002 to 2013, the average size of a Hartford magnet school grew from 357 to 483 pupils, with average white enrollment rising from 35 to 123. At traditional schools, over the same period, average enrollment dropped from 625 to 411 pupils, with the average number of whites falling from 28 to 20.

There are also persistent allegations that magnet schools weed out and send back students who are behaviorally or academically unfit. Wareing said he understands the practice was once more common, but he does not know of any study on the claims.

"The system we are in now perpetuates junk drawers," said Aldwin Allen, a north Hartford parent who sent his own children to magnet schools and directs school-based services for the Village for Children and Families. "The things we throw into this drawer are children."

So how can Hartford even out the disparities?

Wareing, the school board chairman, said the first step would be to have magnet schools take in a higher, proportionate share of high-needs students. One possibility is to have families opt out of the lottery, rather than opting in, although he noted the school board does not control the lottery and any changes would have to consider the regional desegregation effort.