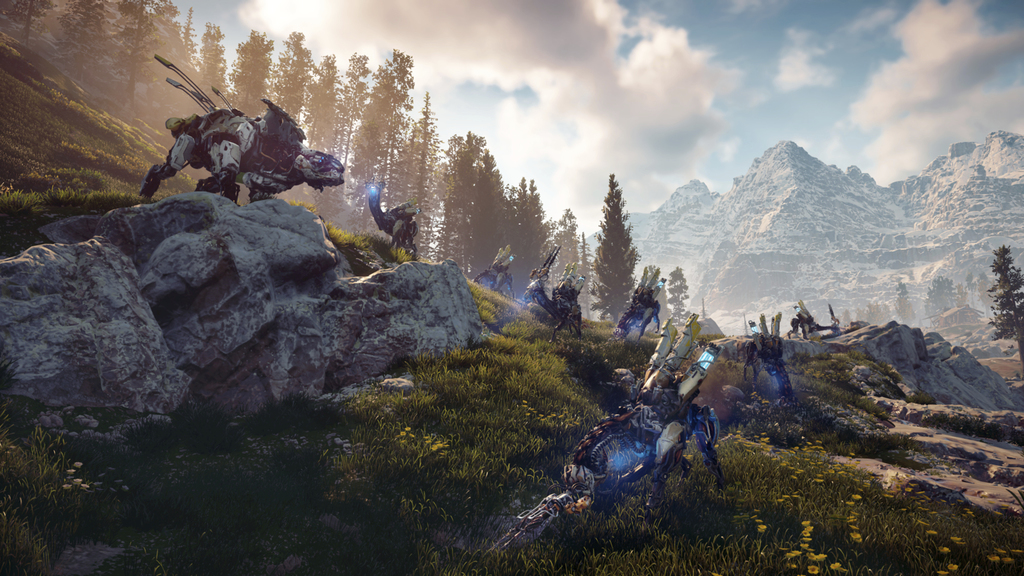 As a longtime video-game player, I've spent many hours roaming around post-apocalyptic wastelands. I thought I'd seen it all, from vicious gangs to bloodthirsty aliens to horrifying mutants.

Then "Horizon Zero Dawn" (Sony, for the PlayStation 4, $59.99) introduced me to the snapjaw, a bionic alligator that froze me with torrents of ice pellets before turning me into lunch.

The snapjaw is just one of the dozens of cybernetically enhanced beasts roaming the "Horizon" wilderness, from the pesky, raptorlike watchers to the overgrown giraffes known as tallnecks. The mystery: Who made these monsters and set them loose on Earth?

Your character is Aloy, a headstrong young woman who's been raised to fight by a wise old hunter named Rost. When Aloy was born, she and Rost were outcast by their village's matriarchal rulers. And there's your second enigma: Why?

"Horizon" keeps building mystery upon mystery: Who was Aloy's mother? Why are the matriarchs so secretive? And what's with the underground "cauldrons" everyone's so afraid of?

Aloy gains one advantage in an early trip to a cauldron: a "focus" that provides an augmented-reality overlay on the environment, letting her scan the monsters and find their weak points. The high-tech focus' other functions are less immediately apparent, but try not to be surprised when strange voices start talking to you.

Aloy has some other tools at her disposal, such as a sword and a bow to help take down those ornery critters. She can also domesticate a few of them; the equine striders are particularly useful for getting from one settlement to the next. And she can craft bombs and traps from the body parts of her downed quarry.

Of course, Aloy has to deal with plenty of stubborn humans, too, from bandit gangs to slave traders to wary civilians who are just trying to rebuild a culture. I was largely impressed with the variety of side missions in "Horizon," which usually take unexpected detours from their original goals.

Even when you're on an urgent mission, though, you should take the time to appreciate the gorgeous world rendered by developer Guerrilla Games. This isn't the drab, gray environment of the post-nuclear "Fallout" games, instead offering breathtaking vistas bursting with color.

"Horizon" borrows much from recent hit games. Its open-world exploration and crafting reminded me of the "Far Cry" series, especially last year's prehistoric "Far Cry Primal." The mechanism by which Aloy can track her foes reminded me of 2015's "The Witcher 3." And "Horizon" came out the same week as the new chapter in "The Legend of Zelda," giving us all the horseback-riding, bow-hunting action we'll need for the year.

And yet, "Horizon" feels fresh throughout. The Amsterdam-based Guerrilla has been known until now as the creators of "Killzone," a series of beautiful-looking yet uninspired war games. "Horizon" is the work of an experienced studio that's finally been allowed to take the chains off, and it's exhilarating. Four stars out of four.