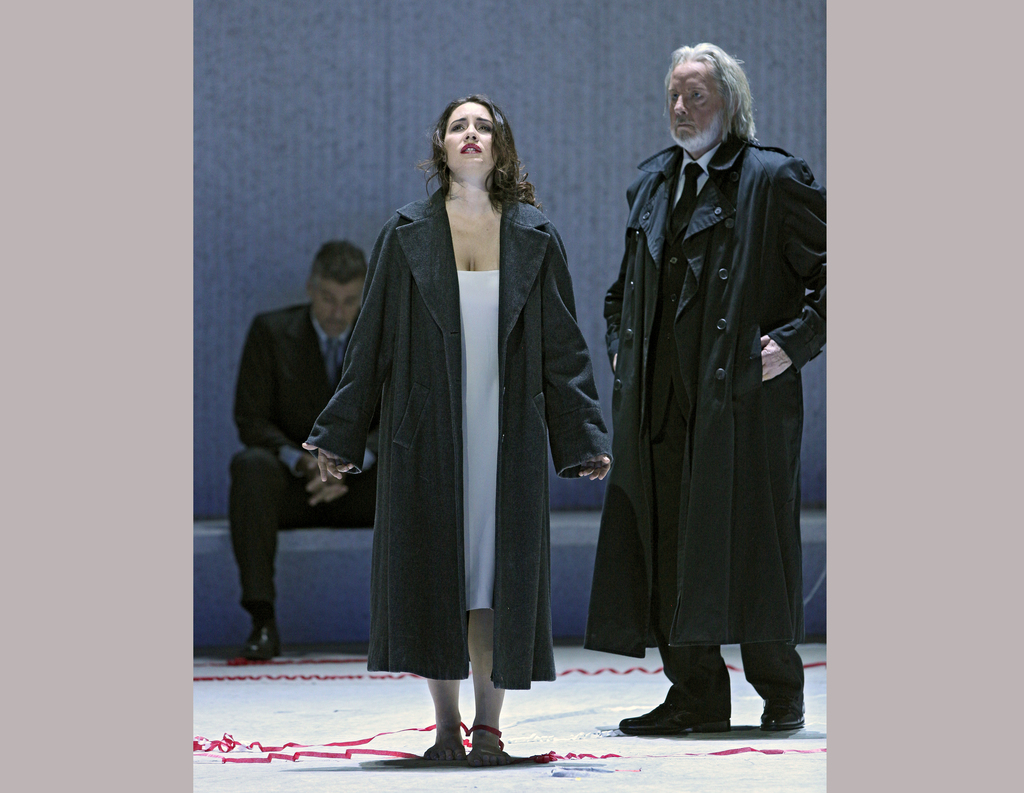 NEW YORK (AP) — Before the first plaintive strains of music are heard in Verdi's "La Traviata," a gentleman with long white hair and beard to match takes his seat next to a giant clock at the side of the Metropolitan Opera stage.

He will remain in view through much of the opera, a mostly silent presence looming over Violetta as she enacts her tragic story.

"You could call him fate, you could call him the inevitable, basically sort of a timekeeper, constantly showing up," said James Courtney, the veteran bass-baritone who plays the character Doctor Grenvil.

In the original libretto the doctor is a minor character, but he has been given a vastly expanded role by director Willy Decker, whose starkly modern production created a sensation at its premiere in Salzburg, Austria, in 2005.

That production is getting its last revival at the Met and will be broadcast live in HD to movie theaters worldwide on Saturday.

Courtney said the doctor's somewhat enigmatic character makes it "interesting, because it isn't so clear-cut, and that's fun. ... Since you're not singing anything, you have to do it through your presentation of yourself onstage.

"A lot of people ended up asking me, 'What are you doing out there?' So it sort of became a running joke backstage that I'm Doctor Death."

Courtney does sing the few lines assigned to Doctor Grenvil in the final scene, when he examines the dying Violetta. Earlier, his role in the ensembles is sung by a character known simply as A Guest.

Courtney is a "comprimario," a singer who specializes in supporting roles, often with just a few solo lines.

Since his 1979 debut as a monk in Ponchielli's "La Gioconda," he had racked up 1,909 performances heading into the current run of "Traviata" — enough to put him at No. 5 on the Met's list of most performances by a singer.

Unlike the stars, who must rest their voices the way baseball pitchers rest their arms, a comprimario can go on virtually every night. Early in his career, Courtney recalled, he sang 91 performances in a single season.

"There was a time when you'd rehearse all day in one opera, take a three-hour nap, then go back onstage for the evening performance," Courtney said. "The joke was you'd go into the dressing room, see what costume was there, and you'd put it on and sing whatever language went with that costume."

Despite his impressive record, Courtney said he will never come close to eclipsing tenor Charles Anthony, who holds the top spot with a staggering 2,928 appearances.

WHERE TO SEE IT

The HD broadcast of "La Traviata," starring soprano Sonya Yoncheva as Violetta, tenor Michael Fabiano as Alfredo and baritone Thomas Hampson as his father, with Nicola Luisotti conducting, will be shown starting at 12:55 p.m. EST on Saturday. A list of theaters can be found at the Met's website: metopera.org/hd.