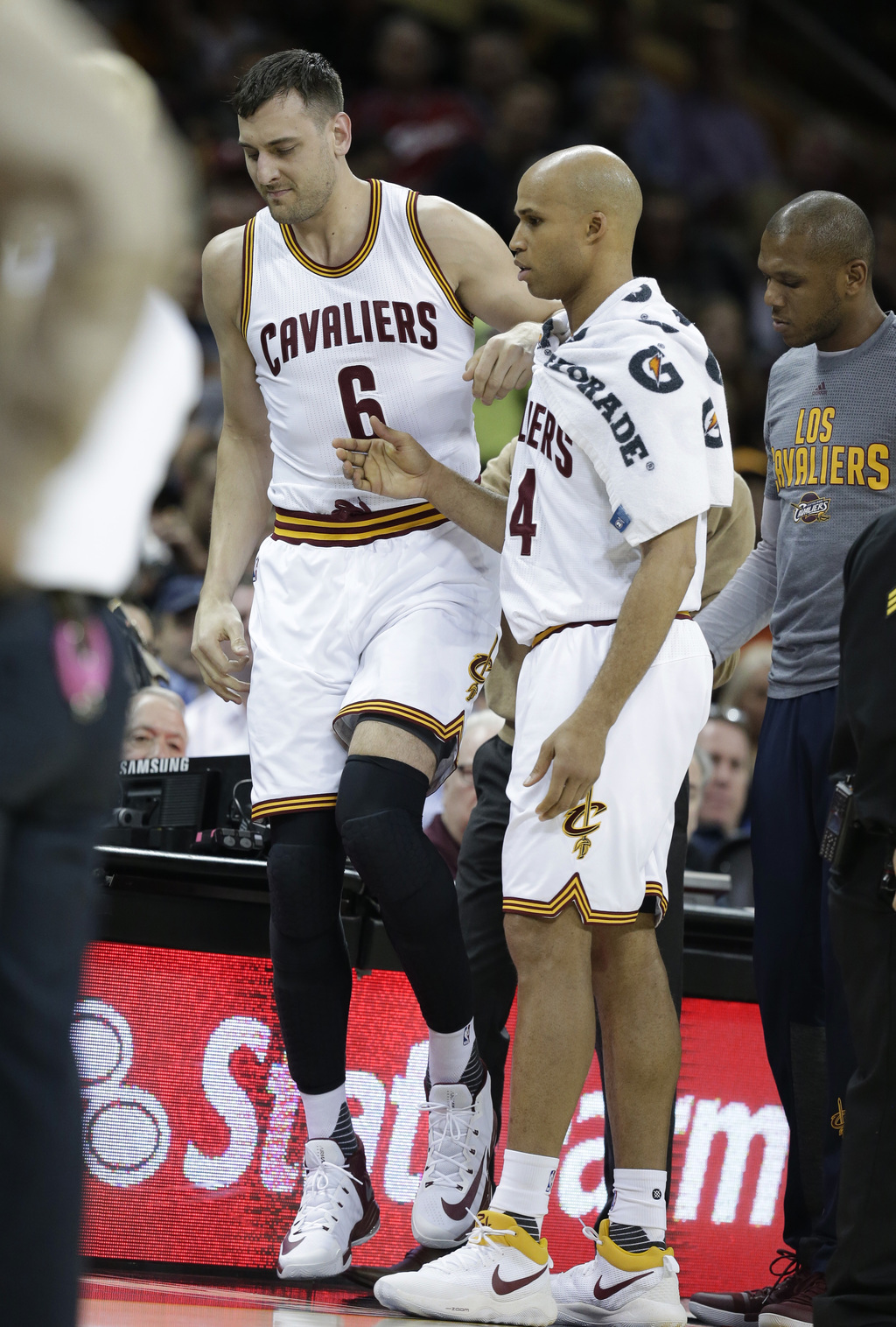 CLEVELAND (AP) — Andrew Bogut went from being perhaps the final puzzle piece to another missing one for the Cavaliers.

Just an hour or so after saying how excited he was to be joining one of the league's deepest teams, Bogut broke his left leg after playing just 58 seconds in his Cleveland debut on Monday night, an injury that could force the Cavs to resume their search for a big man.

Bogut had just been welcomed with a roaring ovation by Cleveland's crowd when his shin banged into the knee of Miami's Okaro White in the first minute of the second quarter. Bogut immediately knew his leg was broken, and LeBron James said he heard Bogut's bone crack on the collision.

As Bogut was helped from the floor, Cavs general manager David Griffin could barely watch as his latest acquisition hobbled into the locker room.

"It happened so quick," said All-Star point guard Kyrie Irving, who knows about the suddenness of injuries after breaking his kneecap in the NBA Finals two years ago. "Adversity, it can come in waves. It can come just at the moment and that's what happened with Bogut."

Bogut's injury came at the end of a day when the Cavs appeared closer to whole than they've been in months.

At the team's morning shootaround, All-Star forward Kevin Love did agility and shooting drills and appeared to be closer to a return than the projected six-week timeframe the Cavs announced when he underwent knee surgery on Valentine's Day. And then there was J.R. Smith playing in a vigorous 3-on-3 game before the Cavs' 106-98 loss to the Heat. Smith, who has been out since Dec. 20 after badly breaking his thumb and undergoing surgery, may be just a few days from making his return.

Bogut's signing, which came just days after the team locked up free agent and three-time All-Star guard Deron Willliams for the remainder of the season, was supposed to be the last move the Cavs needed to make before the playoffs.

Cleveland has needed a rim-protecting big man all season, and the massive Bogut was projected to give the Cavs more than that. The 32-year-old is a gifted passer with postseason savvy and was motivated to get back to the Finals for a possible shot at the Golden State Warriors, the team he won a ring with in 2015 but discarded him last summer to make room for Kevin Durant.

It's premature to say how long Bogut will be out, and the initial diagnosis of a fractured tibia doesn't provide any timeframe because it's not known if he shattered the bone or chipped it. In any event, Bogut will be sidelined indefinitely, which could send Griffin shopping for the postseason.

The Cavs need a backup for Tristan Thompson and big body to contend with some of the centers they could face in May and June.

Bogut, who missed the last two games of the 2016 Finals with a knee injury, said he chose Cleveland over Boston, the Cavs' nearest competitor in the Eastern Conference, because "it's the best opportunity to try to win a championship playing with one of the best if not the best players to play the game."

The allure of playing with James is also what brought Williams to the Cavs. After getting a buyout from Dallas, he told Cleveland he was coming to chase a championship.

With one eye on a third meeting with the Warriors in June, Griffin has expertly re-inforced his roster, adding Bogut, Deron Williams, Derrick Williams and Kyle Korver since Jan. 1. There aren't many quality big men on the market, but the club has interviewed and worked out Larry Sanders and there's always a chance the Cavs would consider re-signing Anderson Varejao.

Despite the second loss to Miami in three days and Bogut's unfortunate injury, Irving is assured the Cavs have enough to win it all again.

"David Griffin has done an unbelievable job and the pieces that we do have, I mean, this is probably the best group that I've played on since I've been here," Irving said. "And that's hands down. And talent all around. So I'm definitely still confident about it and I always will be."