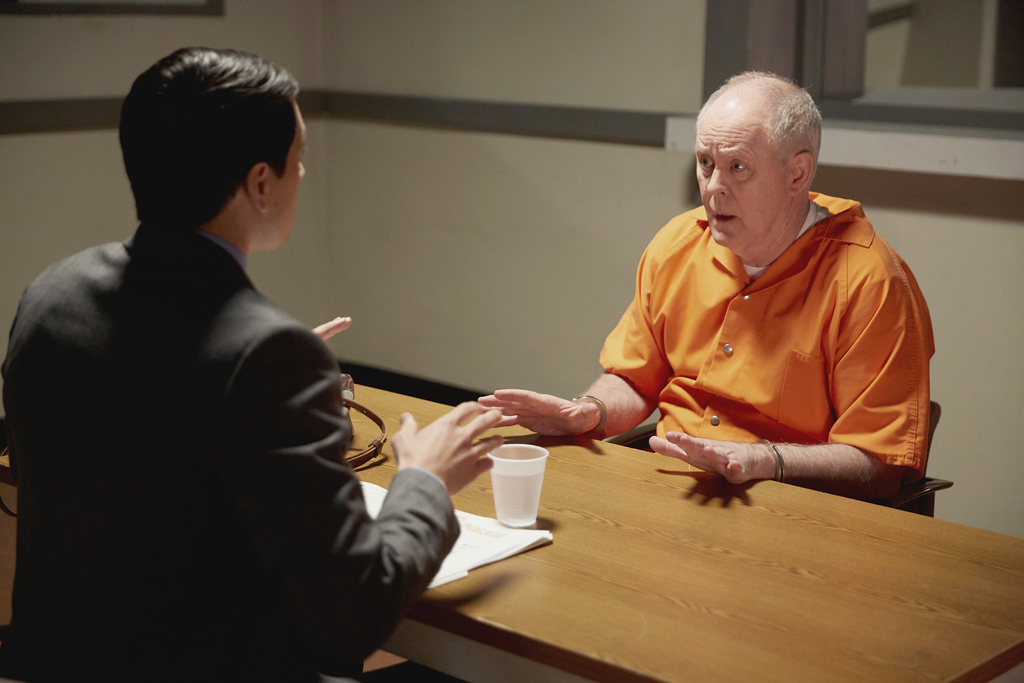 He does it. John Lithgow, who stars in NBC's daffy new comedy "Trial & Error" as a poetry prof who may or may not have murdered his wife, is clearly guilty of making viewers laugh.

He's also guilty, in a career spanning nearly a half-century, of freaking out viewers (item: his chilling psycho-killer in the Showtime series "Dexter"), or warming the heart with his character's humanity (such as his breakout performance as Roberta Muldoon, the transgender former pro football player in "The World According to Garp").

His birth certificate identifies him as John Arthur Lithgow, but as an actor, his middle name is "Versatile."

To wit: Right now he can be seen in the acclaimed Netflix series "The Crown" as British Prime Minister Winston Churchill.

Like the dead-serious docuseries (such as "Making a Murderer" and "The Staircase") it spoofs, "Trial & Error" tracks its wacky murder case across the season's 13 episodes, with Larry's innocence or guilt, and the verdict, kept under wraps until the finale.

Meanwhile, it surrounds Larry with fellow oddballs played by co-stars Steven Boyer, Sherri Shepherd, Krysta Rodriguez, Jayma Mays and Nicholas D'Agosto as an eager young New York lawyer who lands in this quirky Southern town to represent Larry, who can't help undermining his own claim of innocence: "I did NOT kill my wife," he moans before adding with a chuckle, "Back in the day, I was known as a lady killer."

"I'm someone who's known for being really funny, very scary and occasionally very touching," says Lithgow over coffee on a visit to Manhattan last week, "and the role requires all those three parts."

As Lithgow sizes him up, Larry is a chap "with mood swings, mental blind spots and no sense of proportion: The cable guy failing to arrive and his wife lying dead on the floor are matters of equal urgency and importance to him."

He says he drew inspiration from the legendary French filmmaker-actor Jacques Tati, whose onscreen persona "was always a bit oblivious, just a little bit startled by everything, and acted in a completely rational but inappropriate way to whatever happened.

"But as loony as Larry is, the audience has to be able to buy it either way — that he either has or hasn't murdered her — and really want to follow the clues and red herrings and find out the truth."

Lithgow comes to "Trial & Error" as an established, multi-Emmy-winning sitcom star: For six seasons, he played the leader of a quartet of extraterrestrials who posed as a human family on a fact-finding mission to Earth on the 1990s hit "3rd Rock from the Sun."

He has also appeared on the Broadway stage in some two dozen productions, including the musical "Sweet Smell of Success" and "M. Butterfly," the celebrated drama where he played a French diplomat who falls for a beautiful Chinese opera diva who is actually a man masquerading as a woman.

There's something endlessly adaptable, a faithful unexpectedness about Lithgow, however readily familiar he is to audiences with that lanky, 6-foot-4 frame and the face a producer once defined for him as "in neutral: The audience never knows which way it's gonna go."

"Such a curious backhanded compliment — You have such a bland face — and it's always stayed with me," says Lithgow, his face at that moment ignited in a grin. "I love to be surprising."

He traces his urge to keep changing and surprising to his own background. Born in Rochester, New York, Lithgow, 71, grew up in a theater family, with his father producing Shakespeare festivals. From childhood, he was immersed in the Bard's full canon and, from the age of 6, was tapped for a range of onstage roles.

He attended Harvard University and was awarded a Fulbright scholarship to the London Academy of Music and Dramatic Art, then returned to New York to pursue a stage career (and swiftly won the first of his two Tony Awards).

Then he moved to Los Angeles, though not to be a movie star, but out of love — he wed UCLA economics professor Mary Yeager. And within a two-year period he scored "Garp," ''Twilight Zone: The Movie," ''Terms of Endearment," ''Footloose" and "The Adventures of Buckaroo Banzai Across the 8th Dimension."

"I felt like that announced: 'He'll do anything!' — and, boy, I've done everything," he says, summing up. "I really enjoy playing people who end up not being what you thought they were. Everybody has some degree of good and bad in them, and I love exploring all that duality. I love crossing the line back and forth, playing the contradictions.

"That's what all of us do all the time."