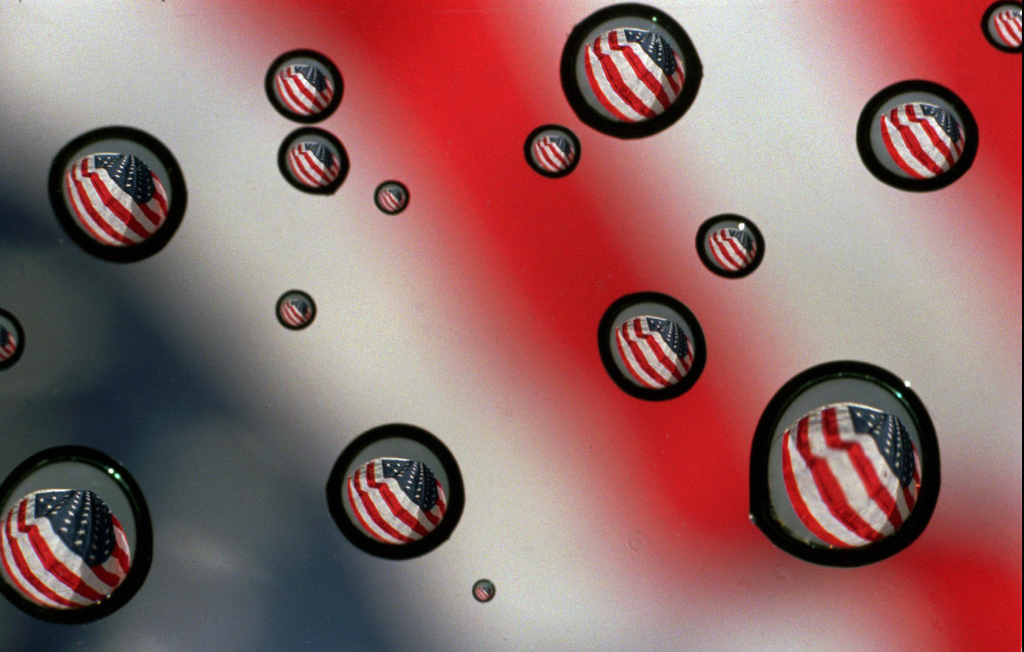 NEW YORK (AP) — Add one more to the list of things dividing left and right in this country: We can't even agree what it means to be an American.

A new survey from The Associated Press-NORC Center for Public Affairs Research finds Republicans are far more likely to cite a culture grounded in Christian beliefs and the traditions of early European immigrants as essential to U.S. identity.

Democrats are more apt to point to the country's history of mixing of people from around the globe and a tradition of offering refuge to the persecuted.

While there's disagreement on what makes up the American identity, 7 in 10 people — regardless of party — say the country is losing that identity.

"It's such stark divisions," said Lynele Jones, a 65-year-old accountant in Boulder, Colorado. Like many Democrats, Jones pointed to diversity and openness to refugees and other immigrants as central components of being American.

"There's so much turmoil in the American political situation right now. People's ideas of what is America's place in the world are so different from one end of the spectrum to the other," Jones said.

There are some points of resounding agreement among Democrats, Republicans and independents about what makes up the country's identity. Among them: a fair judicial system and rule of law, the freedoms enshrined in the Constitution, and the ability to get good jobs and achieve the American dream.

Big gulfs emerged between the left and right on other characteristics seen as inherent to America.

Reggie Lawrence, a 44-year-old Republican in Midland, Texas, who runs a business servicing oil fields, said the country and the Constitution were shaped by Christian values. As those slip away, he said, so does the structure of families and, ultimately, the country's identity.

"If you lose your identity," Lawrence said, "What are we? We're not a country anymore."

Patrick Miller, a political science professor at the University of Kansas who studies partisanship and polling, said the results reflect long-standing differences in the U.S. between one camp's desire for openness and diversity and another's vision of the country grounded in the white, English-speaking, Protestant traditions of its early settlers.

Those factions have seen their competing visions of American identity brought to a boil at points throughout history, such as when lawmakers barred Chinese immigration beginning in the 1880s or when bias against Catholic immigrants and their descendants bubbled up through a long stretch of the 20th century.

The starkness of the divide and the continuing questions over what it means to be American are a natural byproduct, Miller said, not just of U.S. history, but the current political climate and the rancor of today's debates over immigration and the welcoming of refugees.

"Our sense of identity is almost inseparable from the subject of immigration because it's how we were built," he said. "Given what we are and how we've come about, it's a very natural debate."

The poll found Democrats were nearly three times as likely as Republicans to say that the U.S. should be a country made up of many cultures and values that change as new people arrive, with far more Republicans saying there should be an essential American culture that immigrants adopt.

Republicans overwhelmingly viewed immigrants who arrived in the past decade as having retained their own cultures and values rather than adopting American ones.

Among the areas seen as the greatest threats to the American way of life, Democrats coalesce around a fear of the country's political leaders, political polarization and economic inequality. Most Republicans point instead to illegal immigration as a top concern.

Perhaps surprisingly, fear of influence from foreign governments was roughly the same on the left and right at a time when calls for an investigation into President Donald Trump's possible ties to Russia have largely come from Democrats. About 4 in 10 Democrats and Republicans alike viewed the issue as extremely or very threatening.

Two questions, also posed during the presidential campaign, offered insight into how Trump's election may have changed partisans' views. The poll found about 52 percent of Republicans now regard the U.S. as the single greatest country in the world, up significantly from 35 percent when the question was asked last June.

Some 22 percent of Democrats expressed that view, essentially unchanged from the earlier poll.

Democrats appear to be reinforcing their belief that the country's range of races, religions and backgrounds make the country stronger. About 80 percent made that assessment in the new poll, compared with 68 percent eight months earlier.

About 51 percent of Republicans held that view, similar to the percentage who said so in the previous poll.

The AP-NORC poll of 1,004 adults was conducted Feb. 16-20, using a sample drawn from NORC's probability-based AmeriSpeak panel, which is designed to be representative of the U.S. population. The margin of sampling error for all respondents is plus or minus 3.9 percentage points.