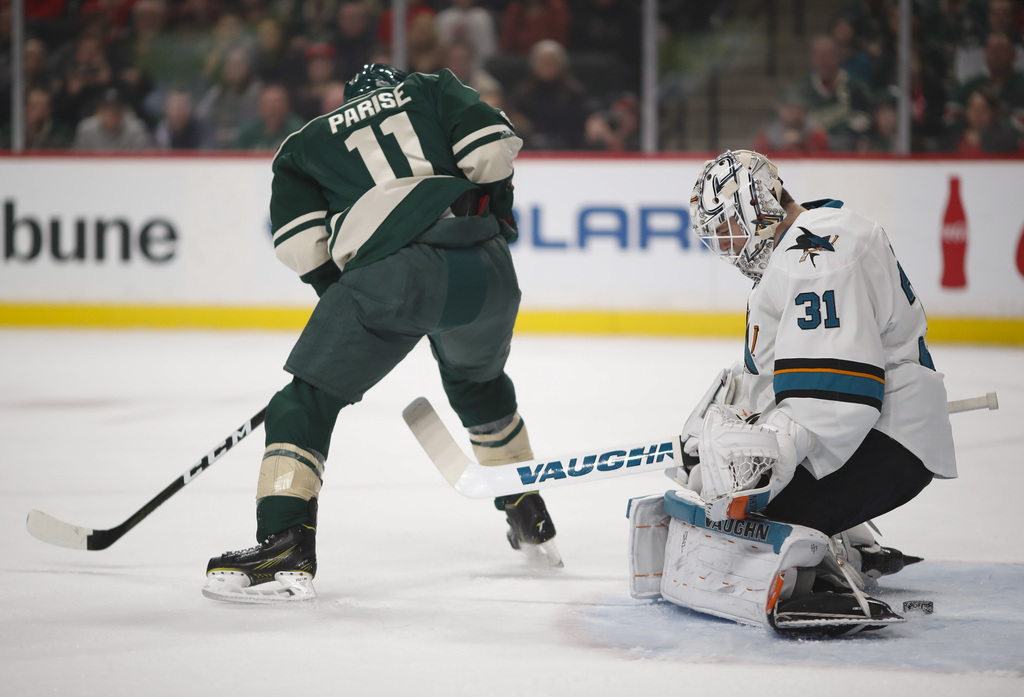 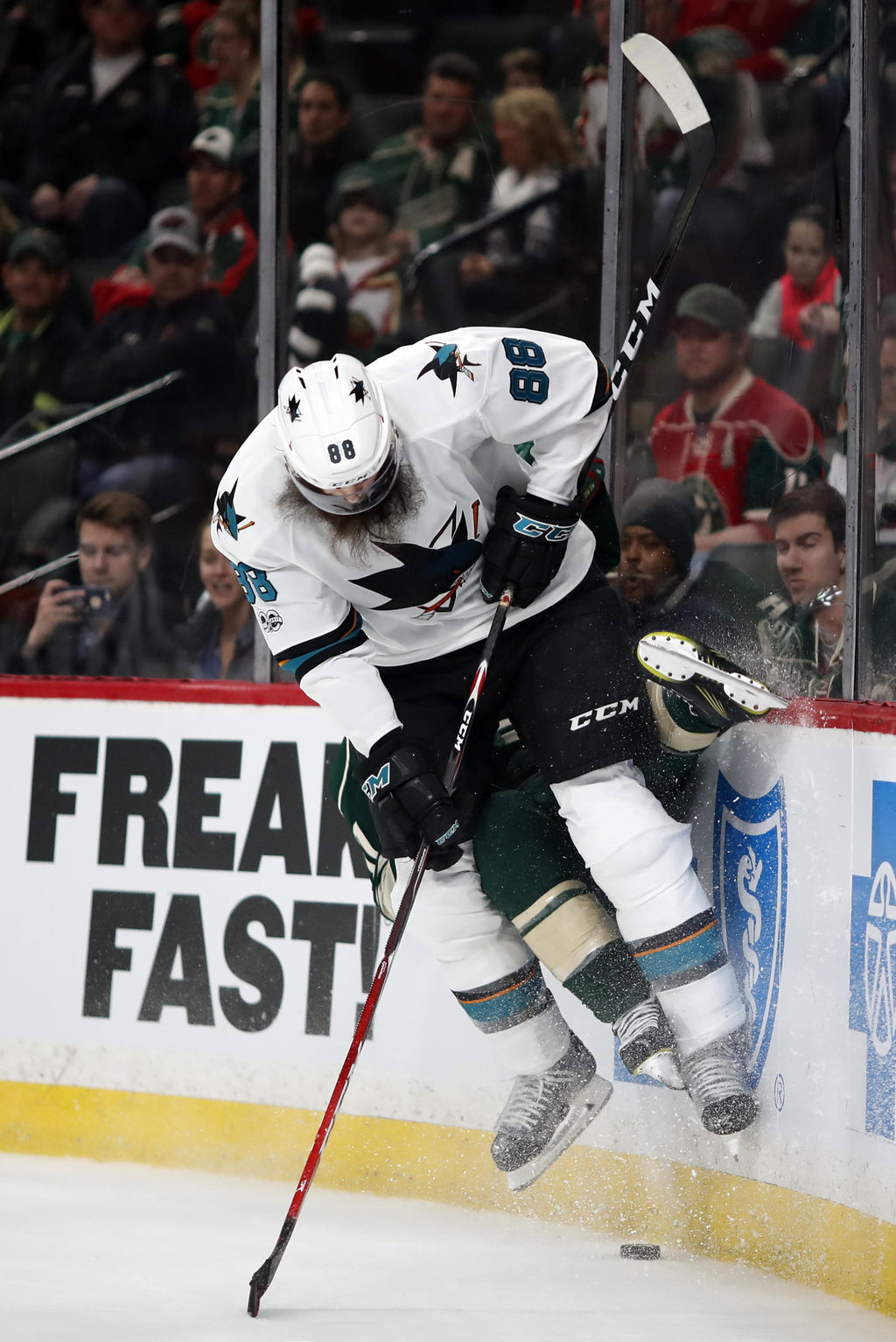 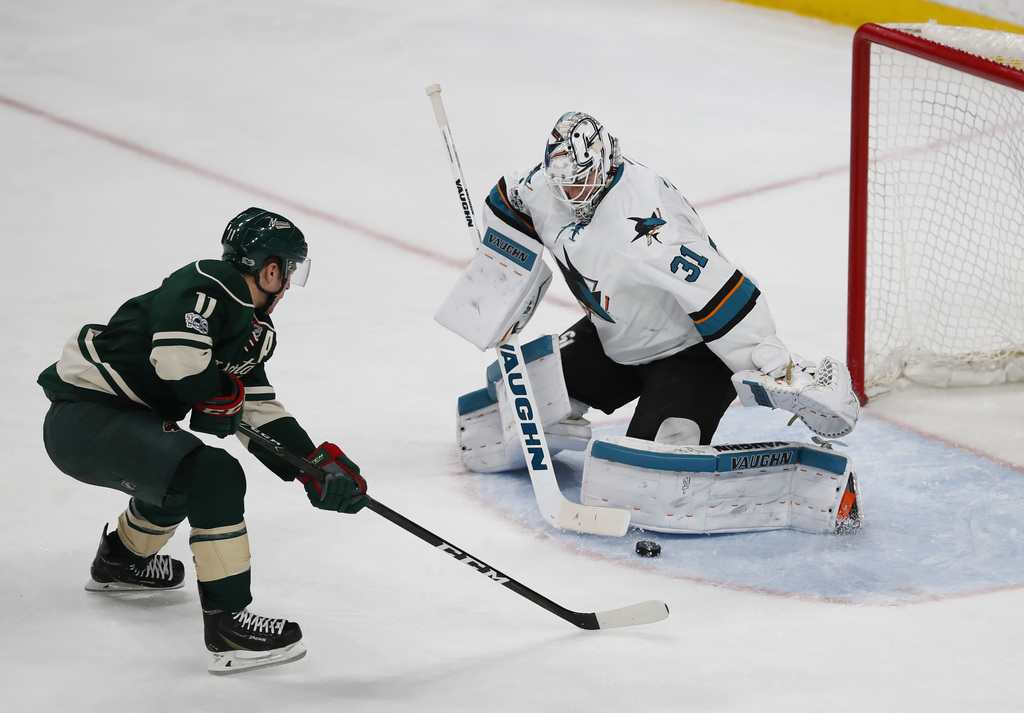 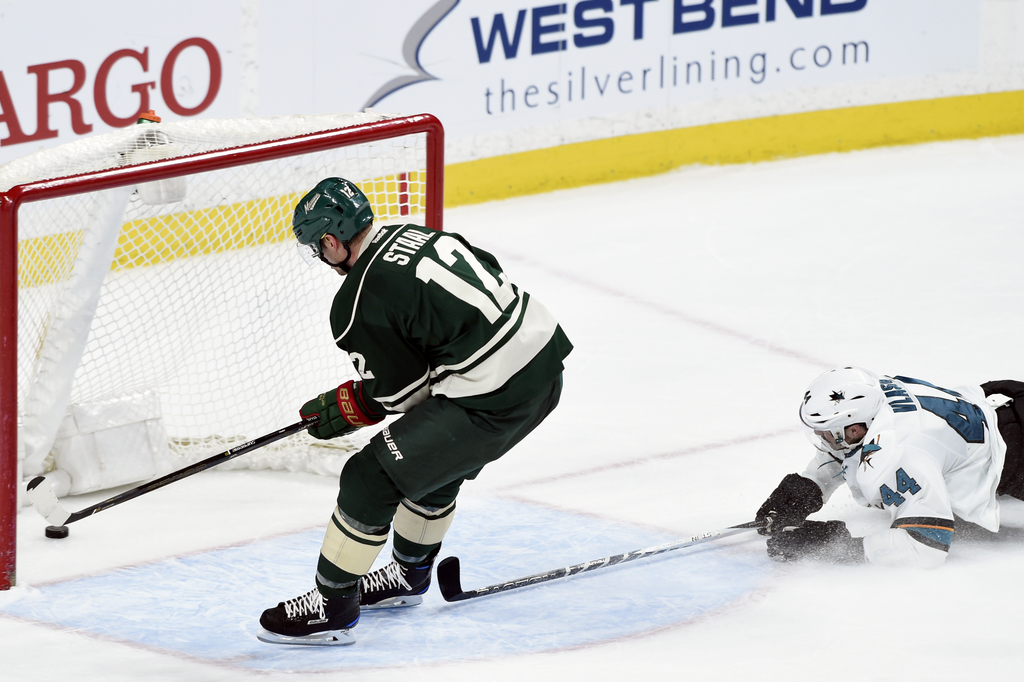 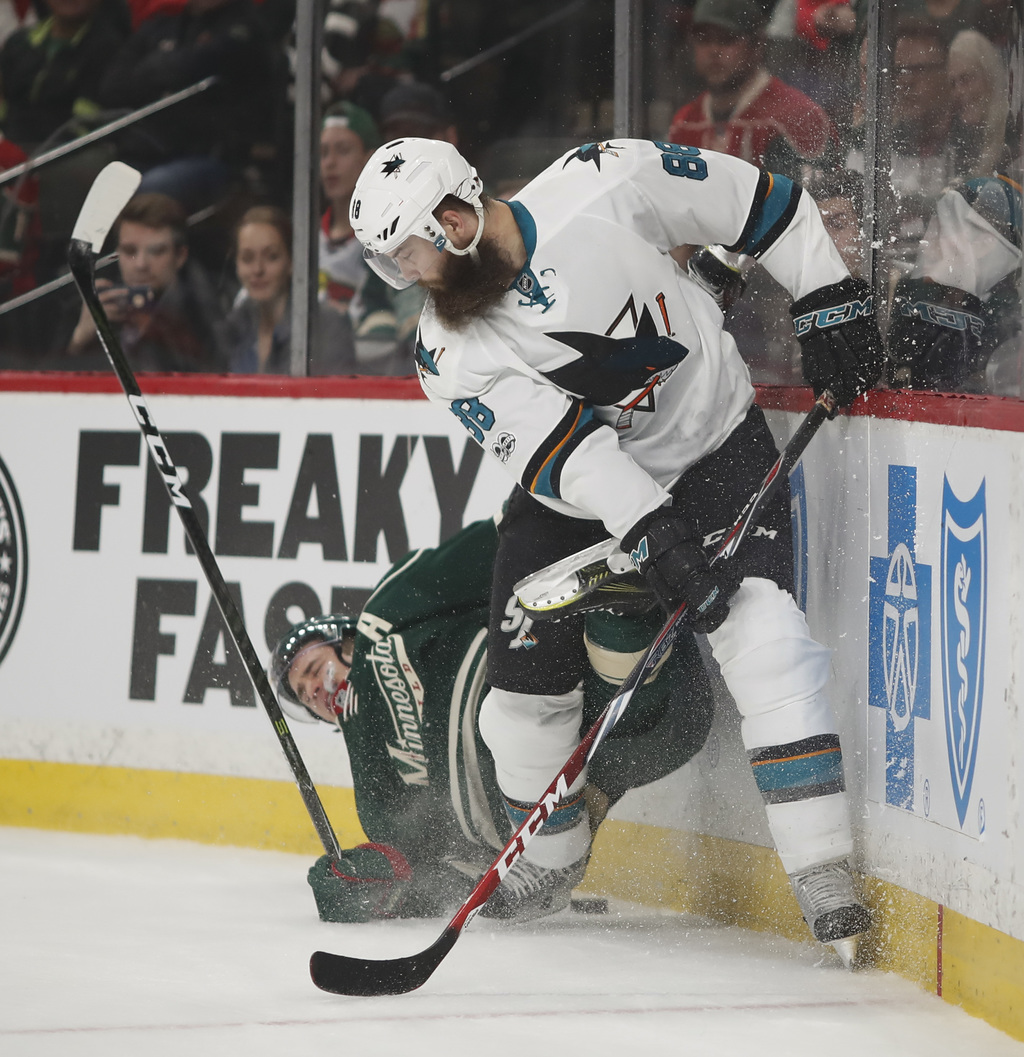 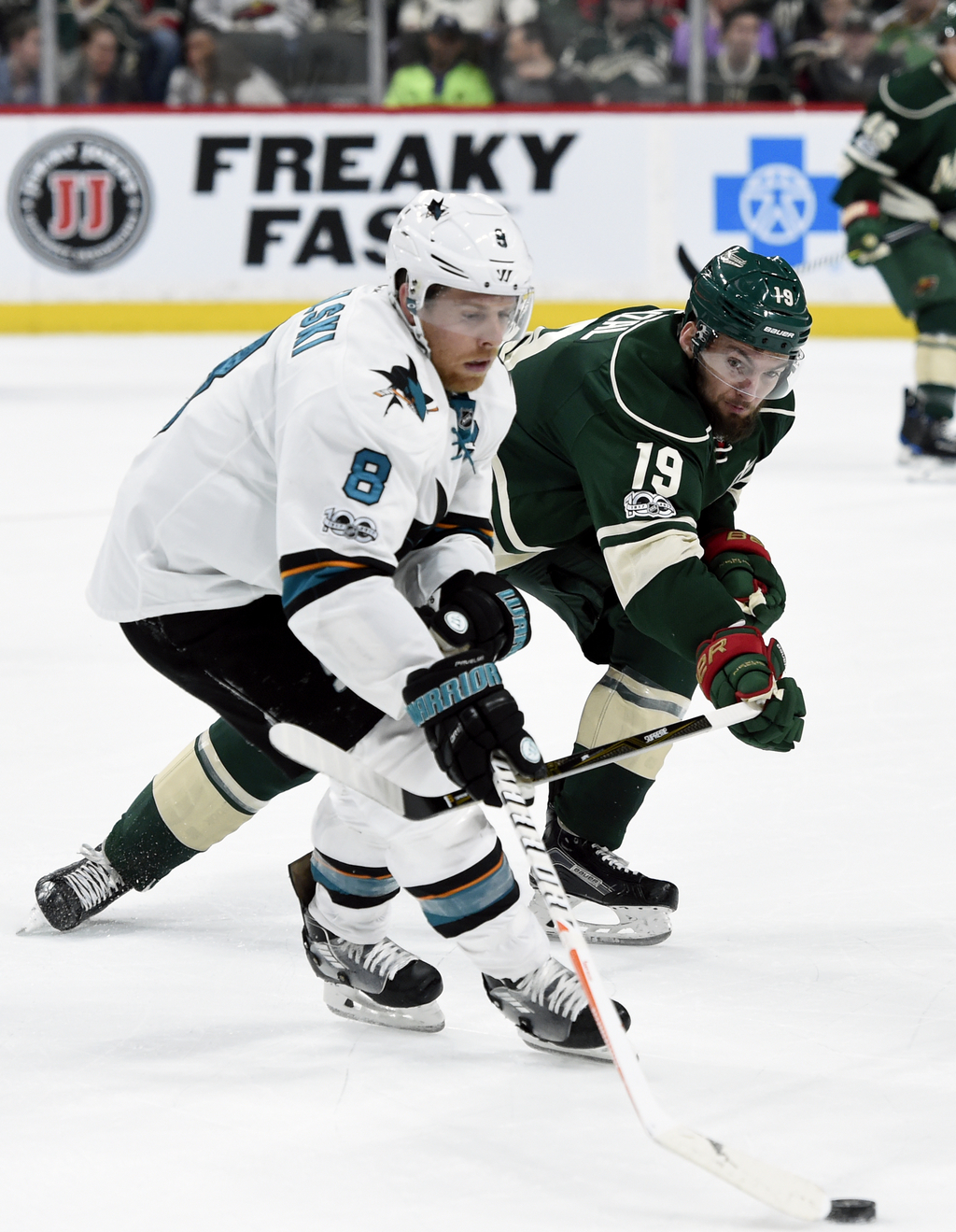 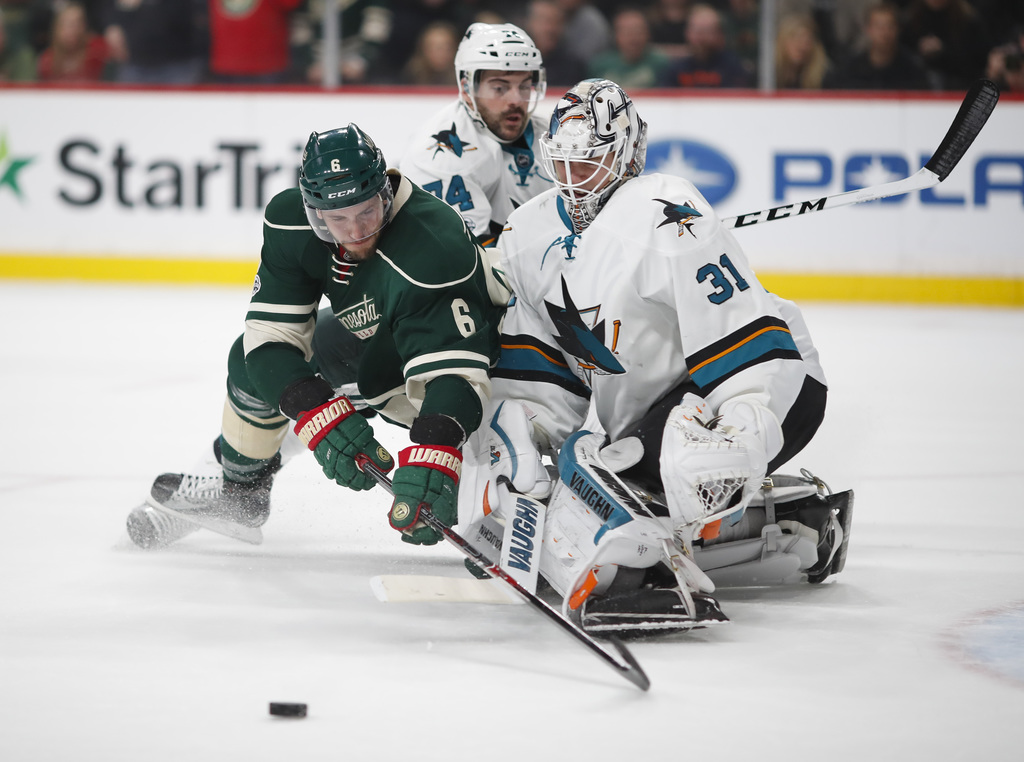 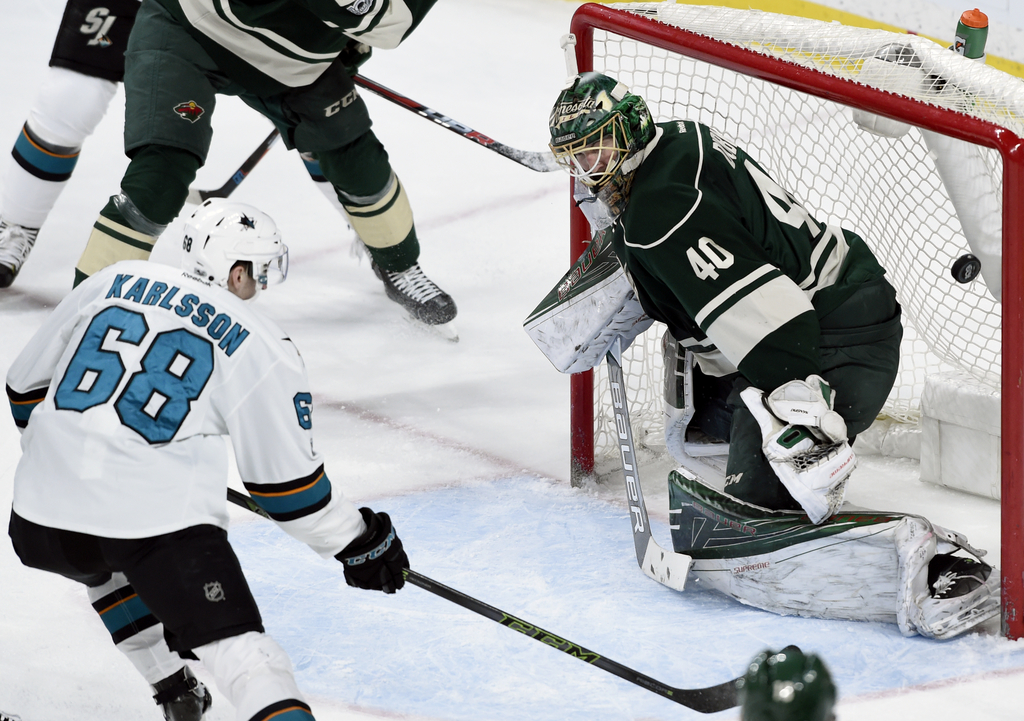 ST. PAUL, Minnesota (AP) — Zach Parise and Jason Pominville returned from the mumps, Eric Staal found his scoring touch and the Minnesota Wild were finally able to put their new-look lineup together.

Staal scored twice and Devan Dubnyk made 20 saves as Minnesota held on for a 3-1 win over the San Jose Sharks on Sunday.

Pominville assisted on Parise's 15th goal to open the scoring as the Wild won for the third time in four games. Parise and Pominville each returned after missing three games, and Minnesota had its full lineup on the ice for the first time since trading for Martin Hanzal and Ryan White.

"Big, strong guys, tough to play against," Staal said of the retooled lineup. "When we have that going over the boards every shift, four lines that can play solid defensively, it's going to make us difficult to beat. Good win for us to stay with it tonight. We've just got to keep improving, getting better, grabbing roles and being excited about winning like this."

The Wild (90 points) moved back ahead of idle Chicago (89 points) for first place in the Central Division and Western Conference.

Melker Karlsson scored for San Jose, which had won three in a row and had an eight-game point streak snapped. Martin Jones stopped 25 of 27 shots.

"There wasn't a lot of space and I thought it was a hard-fought game," Sharks coach Peter DeBoer said. "It's the kind of night where you need a power-play goal or something. You've got to win the special teams battles to win that game and we didn't."

Pacific Division-leading San Jose was 0 for 3 on the power play and is 4 of 32 with the man advantage (12.5 percent) over its past 12 games.

Leading the conference standings at the time, Minnesota made a move to fortify its lines by acquiring Hanzal and White from Arizona on Feb. 26. The next day, prior to a game against the Los Angeles Kings, the team announced Parise and Pominville had been diagnosed with the mumps.

Parise scored 11 minutes in when he deftly deflected a pass from Pominville between his legs and the legs of Jones.

"From mumps to mumps, yeah," Pominville said. "Everyone was laughing in the room after. I didn't think about it 'til we got in the room."

Staal had gone 18 games with just one goal, an empty-net tally against Nashville five games ago. He gave the Wild a two-goal lead after Matt Dumba collected a loose puck in the corner and made a spinning pass right to Staal's stick in the right circle.

Staal added another empty-netter for his fourth two-goal game of the season.

"Sometimes it's got to go and then go slowly and then the next thing you know ...," Minnesota coach Bruce Boudreau said. "The good ones keep at it and it breaks through. The ones that are not as mentally tough get frustrated and it ends up going down to the bottom again."

The Wild thought they scored another goal, but Chris Stewart's shot from the left side ended up in Jones' jersey as the goaltender fell backward into the net. A video review showed the puck got caught in the jersey and stuck by his neck but never crossed the line.

"I felt it hit me, but yeah, I wasn't sure what happened," Jones said.