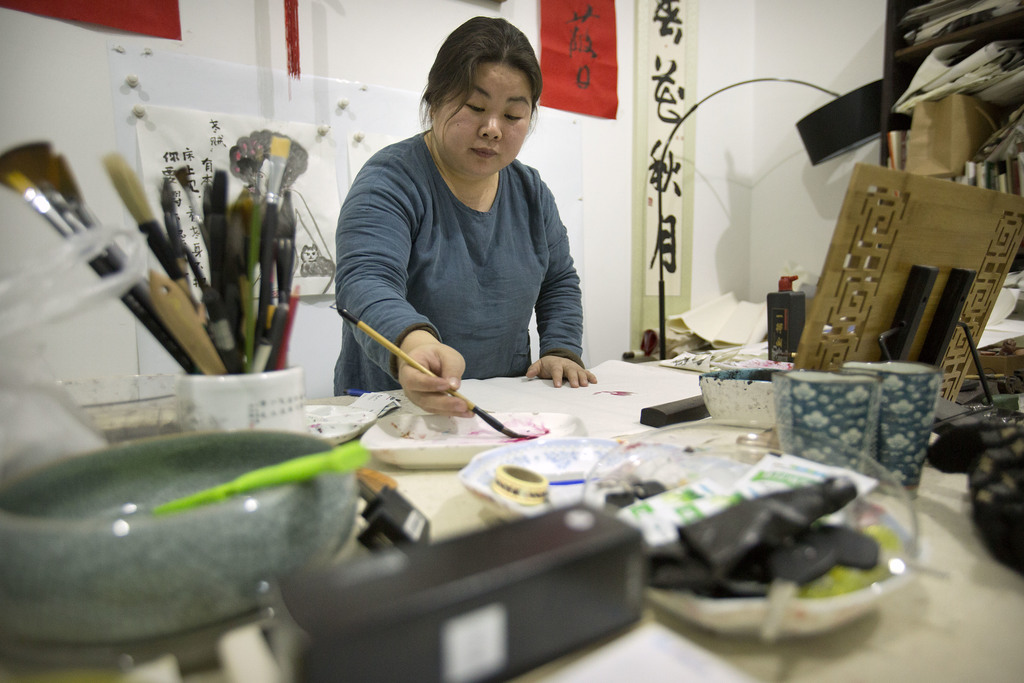 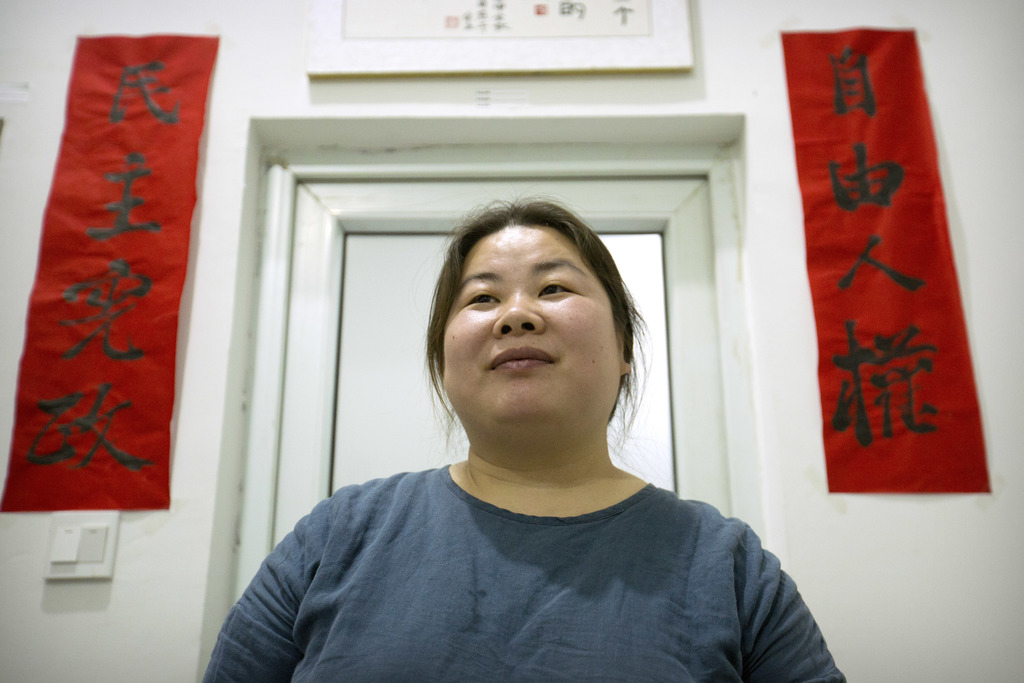 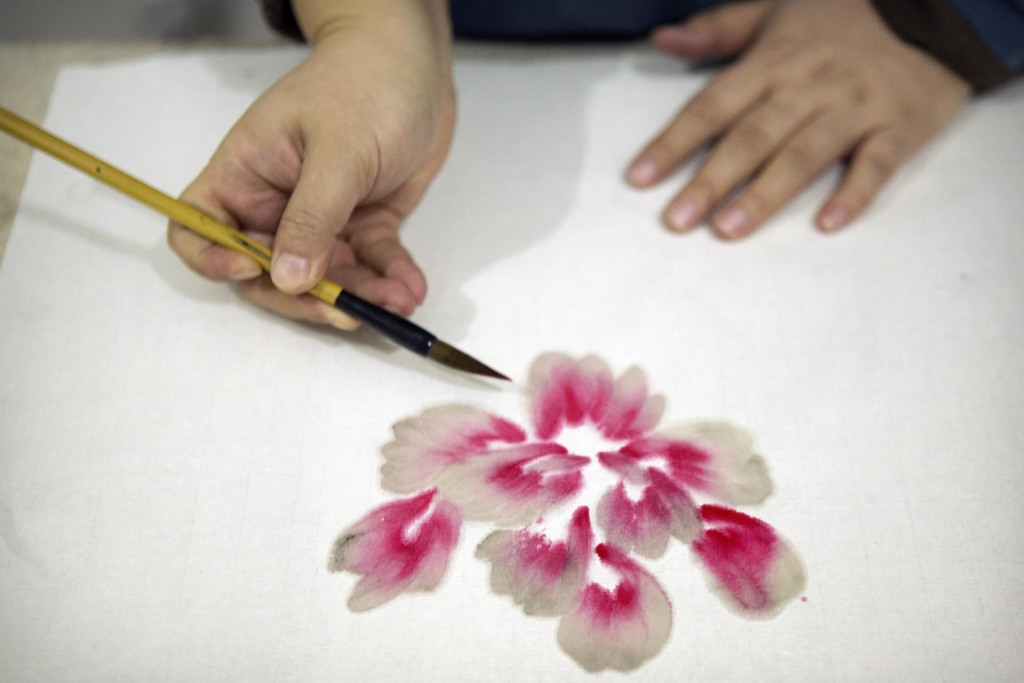 BEIJING (AP) — Chinese authorities have shut down activist Ye Haiyan's blogs and forced her to move from one city to another. Left with few options, she now produces socially conscious paintings to make a living and advocate for the rights of sex workers and people with HIV or AIDS.

Using calligraphy brushes, Ye creates images of naked women and sex workers alongside symbols such as the Chinese characters for equality, or paints roosters, a Chinese homonym for prostitute.

"I've started to understand that painting is also a form of expression and the natural reflection of my thoughts," said Ye. She was recently evicted from her last home in an artists' enclave on Beijing's outskirts ahead of the annual meeting of China's ceremonial parliament that opened Sunday.

Far from the pomp of the 10-day gathering at Beijing's Great Hall of the People, Ye is among those caught up in an annual roundup of people the ruling Communist Party consider threats to the state, all to ensure the session passes without incident. Known critics are placed under tightened restrictions and ordinary people coming to Beijing with grievances are prevented from traveling or snatched off the streets of the capital.

This year's meetings also come amid China's broadest and most intense assault on civil society since nongovernmental groups were grudgingly allowed more freedom to operate more than a decade ago.

Since coming to power almost five years ago, President Xi Jinping has shown little tolerance for dissent, and a sustained crackdown launched in July 2015 has seen hundreds of activists and independent legal professionals detained. More than a year and a half later, eight are still in detention or prison.

"It has been worsening every year since Xi Jinping came to power and this past year has been no different," said Frances Eve, researcher at the Network of Chinese Human Rights Defenders.

Activists estimate that police arrested more than 100 people last year for exercising their right to freedom of expression, including Huang Qi and Liu Feiyue, who ran websites reporting on human rights abuses and critiquing government policies. A series of trials saw some activists convicted under vague laws against subversion and leaking state secrets, with prosecutors blaming unidentified troublemakers abroad for inciting anti-government activity.

"Promoting and protecting human rights is now considered a crime," said Eve. Many of those convicted confess under duress, including torture by police, she said. While China's high court forbids such practices, they are believed to remain common within a police force with broad powers to arrest, question and detain.

Speaking at a news conference last month, foreign ministry spokesman Geng Shuang said China maintains a dialogue on improving human rights around the world, but added, "The Chinese people have the right to say what the real situation of China's human rights is."

The authorities rarely comment on activists such as Ye, who used to have thousands of followers online and her own nongovernmental organization advocating for legalized prostitution and offering advice on sexual health.

Her efforts, including protests against light sentences given to the abusers of schoolgirls, got her noticed by the public and, more ominously, the police, who she says pressured her to close her NGO and move several times. Worried about the impact on her 17-year-old daughter, she sent her to the U.S. last month to study with help from a U.S.-based filmmaker.

Ye says she's gotten a boost from internationally famous artist and activist Ai Weiwei, who bought one of her paintings "depicting a fat woman, a sex worker wishing to earn a lot of money and go home to build a house." Ai previously bought up her belongings when she was evicted from an apartment in 2014 and exhibited the household items — an old refrigerator, a washing machine, cardboard boxes — at one of his shows at the Brooklyn Museum.

Ye reluctantly left her studio on the orders of police last week. An officer reached at the Songzhuang Public Security Bureau on Monday declined to comment on the case. Ye said she went to stay with friends in the countryside and within days again ran into pressure to leave.

"The Communist Party secretary of the village told local residents not to rent to me because I've long been on the blacklist," Ye said.

"They think that a person like me should be the target for 'social stabilization,'" she added, using the government's term for suppressing dissent.