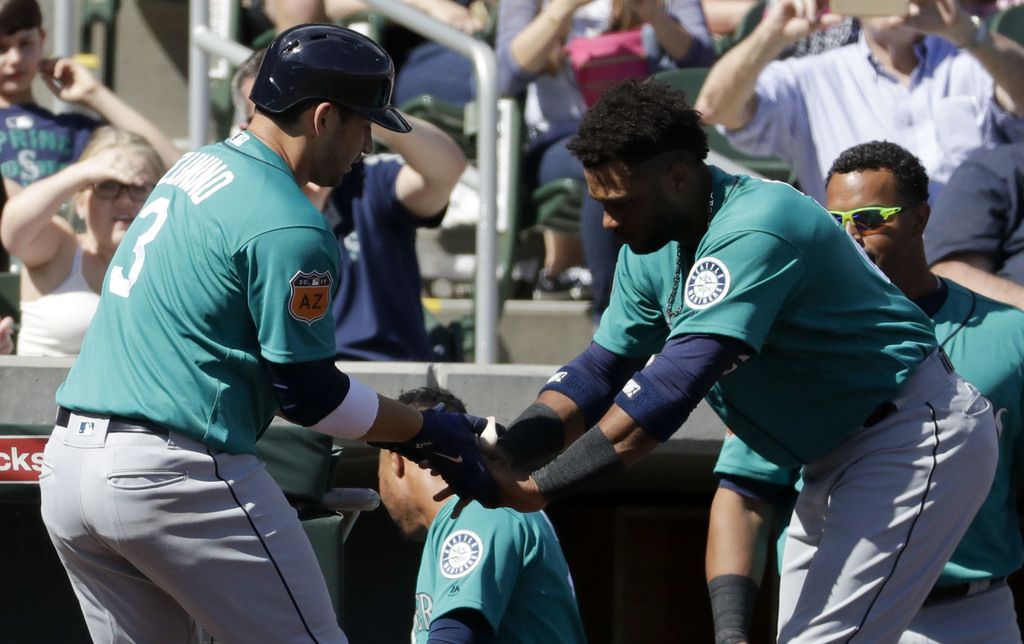 PEORIA, Ariz. (AP) — Robinson Cano, Nelson Cruz and Jean Segura were in a bit of a hurry after playing part of a spring training game.

The three Seattle Mariners had a plane to catch Saturday to Florida, where their teammates from the Dominican Republic World Baseball Classic team are convening in preparation to defend their 2013 title.

Segura is in the WBC for the first time.

"It's going to be really fun for us being around those guys," Segura said of his countrymen. "It's something we're going to give our all to, for sure."

Saturday and Sunday saw an exodus of Mariners to WBC camps in Florida, or a few miles away in Arizona. Come Monday, it'll be baseball as usual for the Mariners at spring training. Only without some big names.

With the conclusion of Sunday's games, the Mariners sent 12 players, both major leaguers and minor leaguers, to the WBC. That group, which became a dozen when shortstop Segura was added to the Dominican Republic roster last week in place of Hanley Ramirez, is the largest contingent in the Cactus League.

The departures mean the Mariners won't have their starting middle infield (Cano and Segura), designated hitter (Cruz) and ace (Venezuela's Felix Hernandez) for anywhere from eight to 18 days. Additionally, two more starting pitchers are in the WBC, though Drew Smyly won't go unless Team USA makes the second round, and closer Edwin Diaz will join Team Puerto Rico at its camp in nearby Scottsdale.

"The one thing I can say to the guys going to the WBC is have fun, enjoy yourself, don't get hurt," Mariners manager Scott Servais said. "We have a big year ahead of us, they know that. They're in good shape, they're ready to go play. Opportunities for other guys to step up."

If there is any positive to losing so many players, it's that there will be more innings for the youngsters in spring training games in the days to come.

Hernandez made his final start Sunday before heading to nearby Surprise to work out with Team Venezuela. After his three innings and 50 pitches to Oakland — in which he allowed two runs on four hits and struck out five — Hernandez is set to start the WBC opener for his country against Puerto Rico on Friday in Jalisco, Mexico.

"It's going to be a fun tournament," Hernandez said. "It's really important to give Venezuela a victory after everything that is happening and the situation there being so bad. A win for Venezuela would be meaningful."

Saturday's starting pitcher, Yovani Gallardo, took the short walk to the other side of the Peoria Sports Complex to join Team Mexico.

Gallardo was tagged for four earned runs in one inning of work in his first spring start, but struck out three in three scoreless innings against Colorado. He's in line to start Mexico's WBC opener against Italy in Jalisco on Thursday.

Gallardo has never pitched in Mexico, and said he's a little nervous but looks forward to the competition.

"You get together with other guys that are from that same country, get everybody in one room and it's exciting," said Gallardo, who pitched in the 2013 WBC. "Very, very competitive from the first pitch on to the last pitch."

Part of what the Mariners will be missing when Cano and Cruz are gone is the leadership they provide. When catcher Mike Zunino homered in the top of the second inning Saturday, Cano and Cruz were the first two players out of the dugout to slap hands with him.

Zunino, in turn, took a moment to wish his teammates luck at the WBC before exiting the clubhouse.

NOTES: Hernandez said of his Sunday start, the second of spring training: "It was good, first inning was a little rough, but after that, it was fine. Last inning was really good." Hernandez said he threw mainly fastballs and struggled with his change-up and fastball location in the first inning, but that it improved. He allowed a run on three hits in two innings in his first spring start.