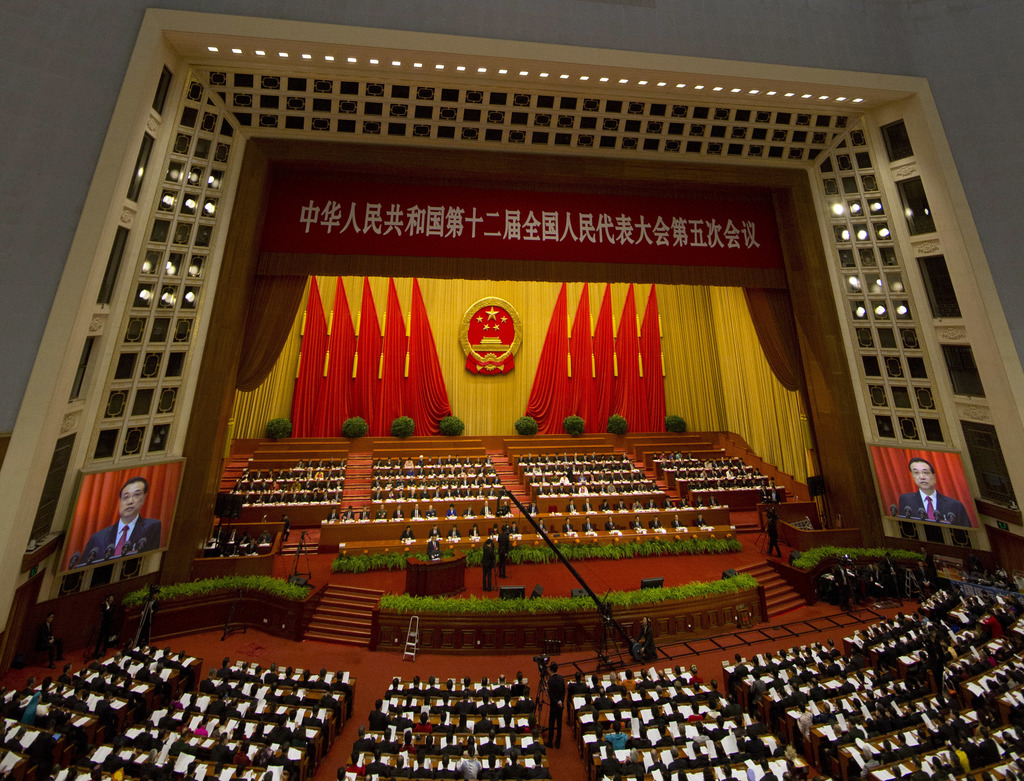 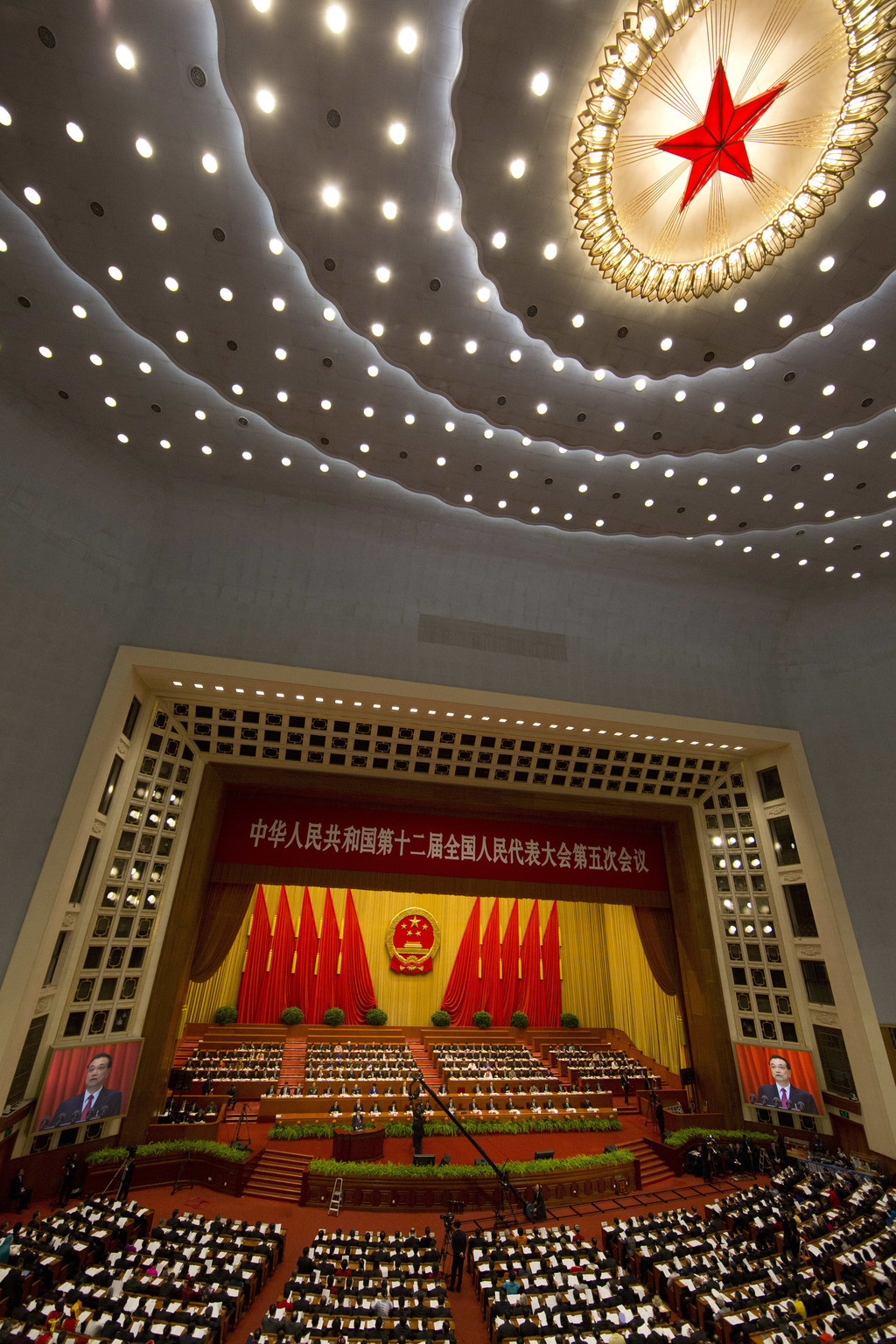 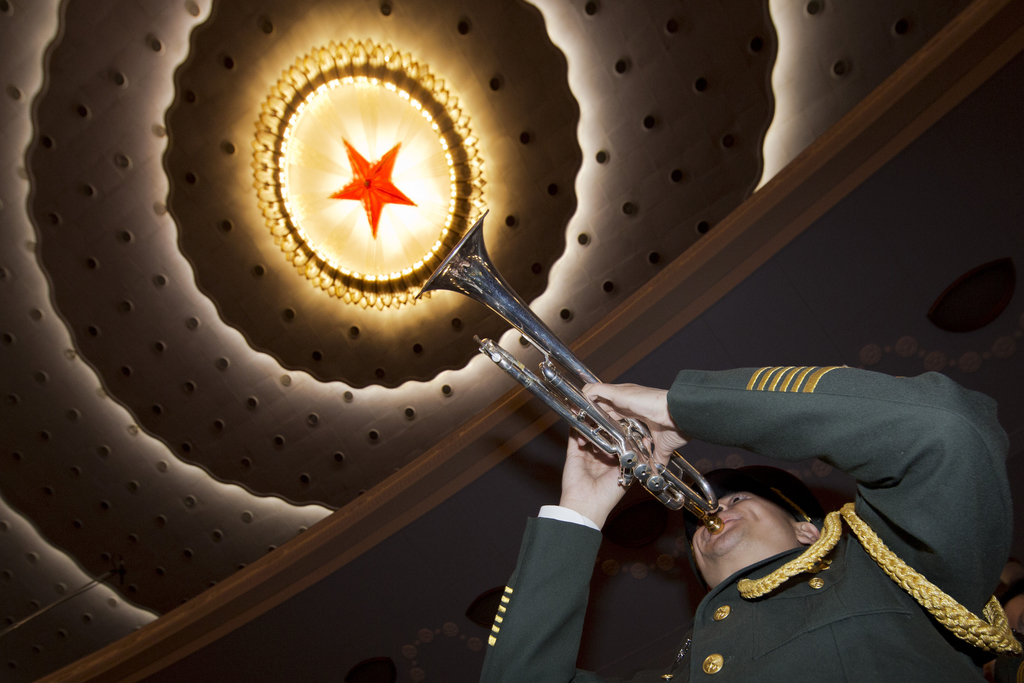 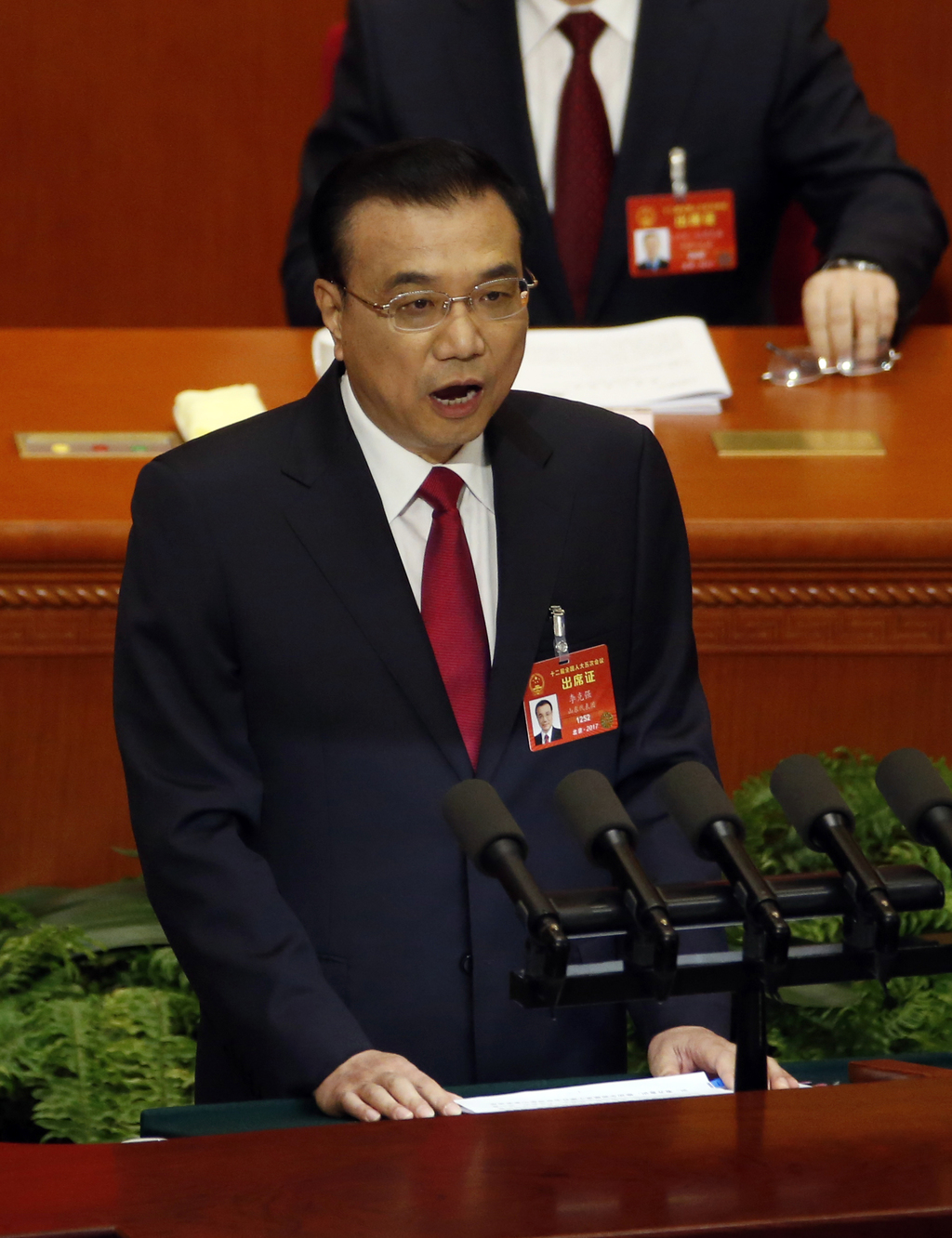 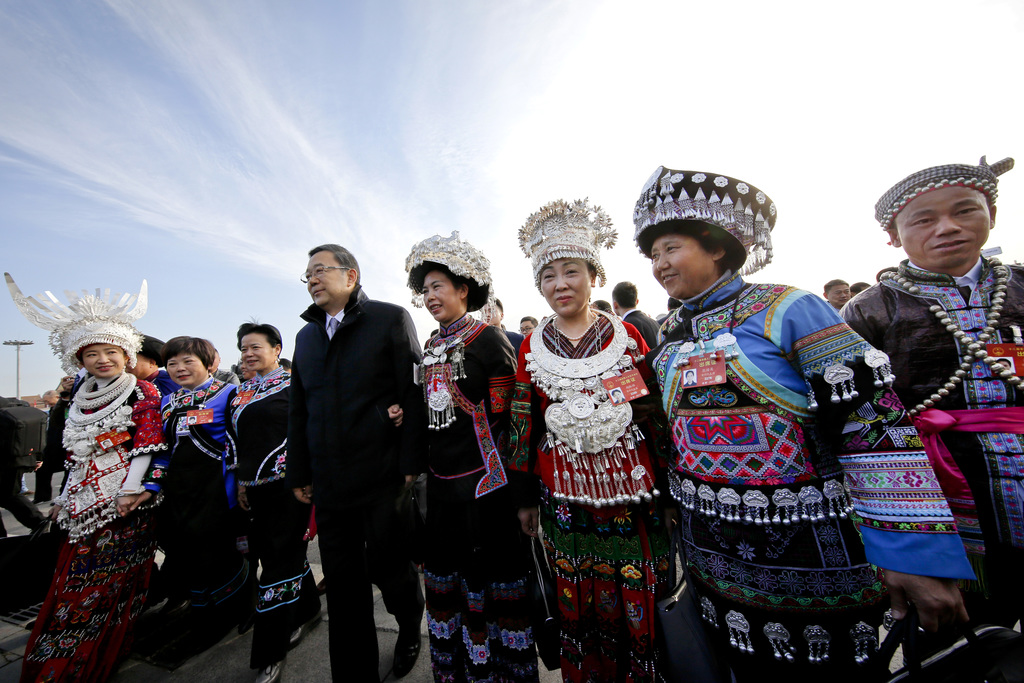 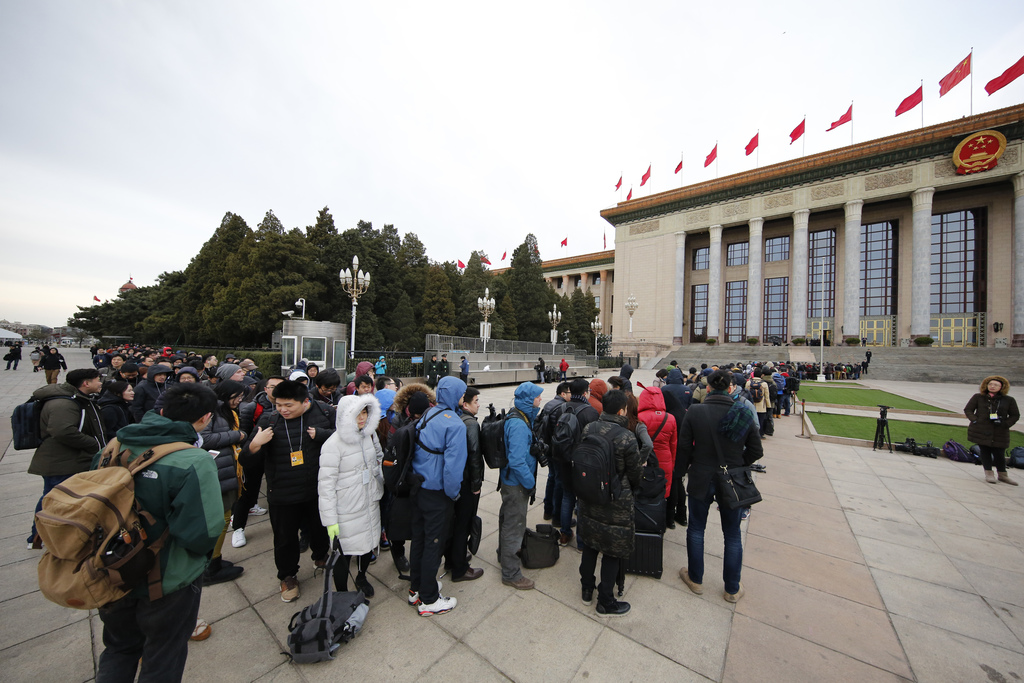 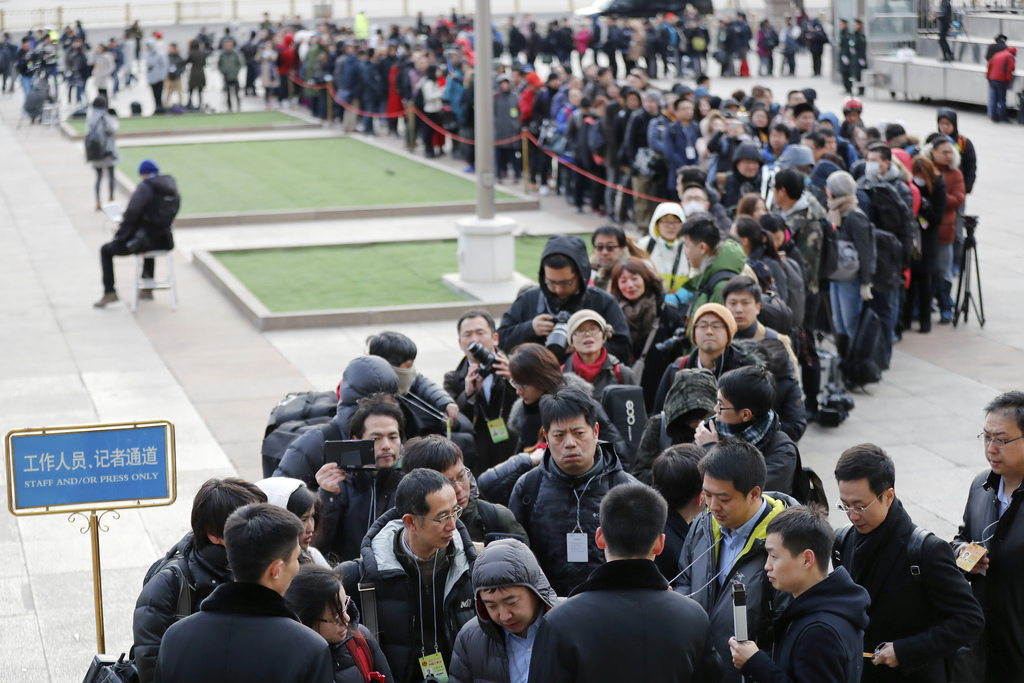 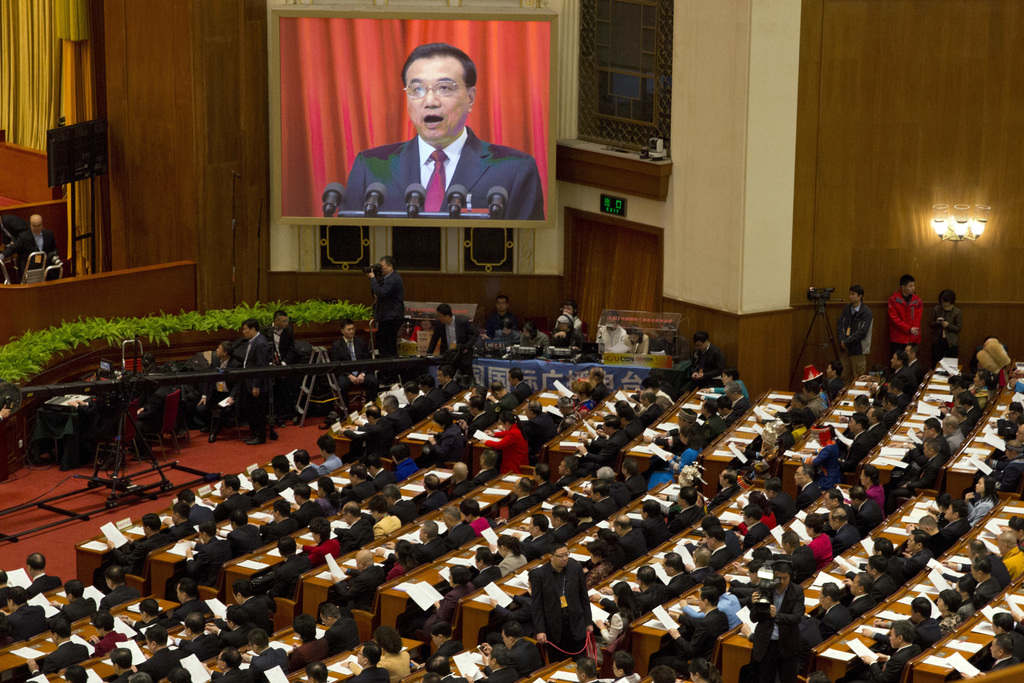 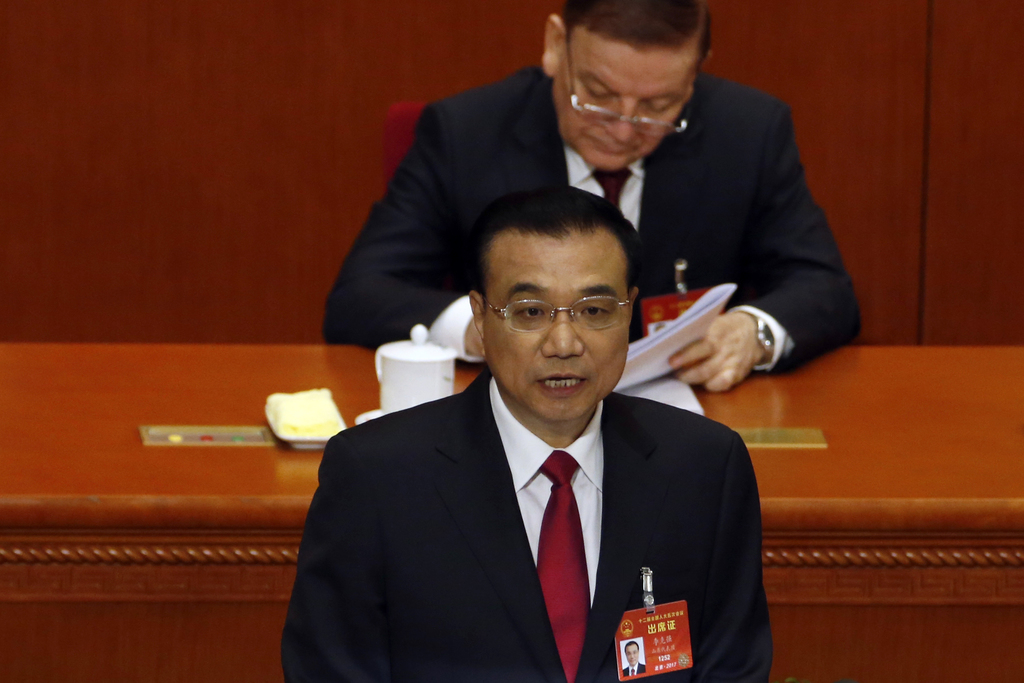 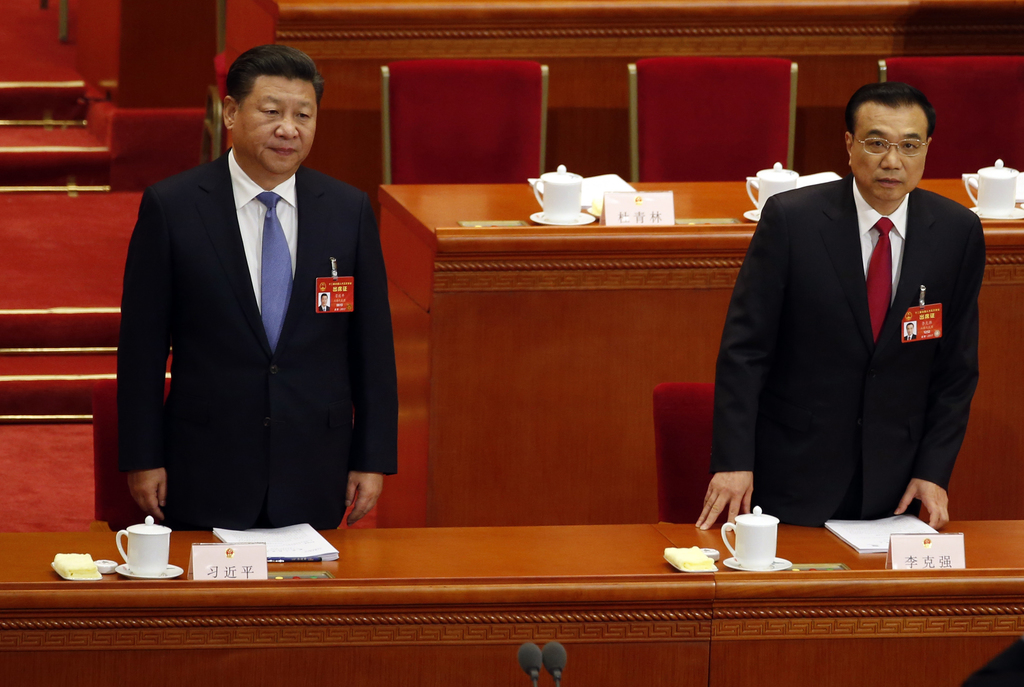 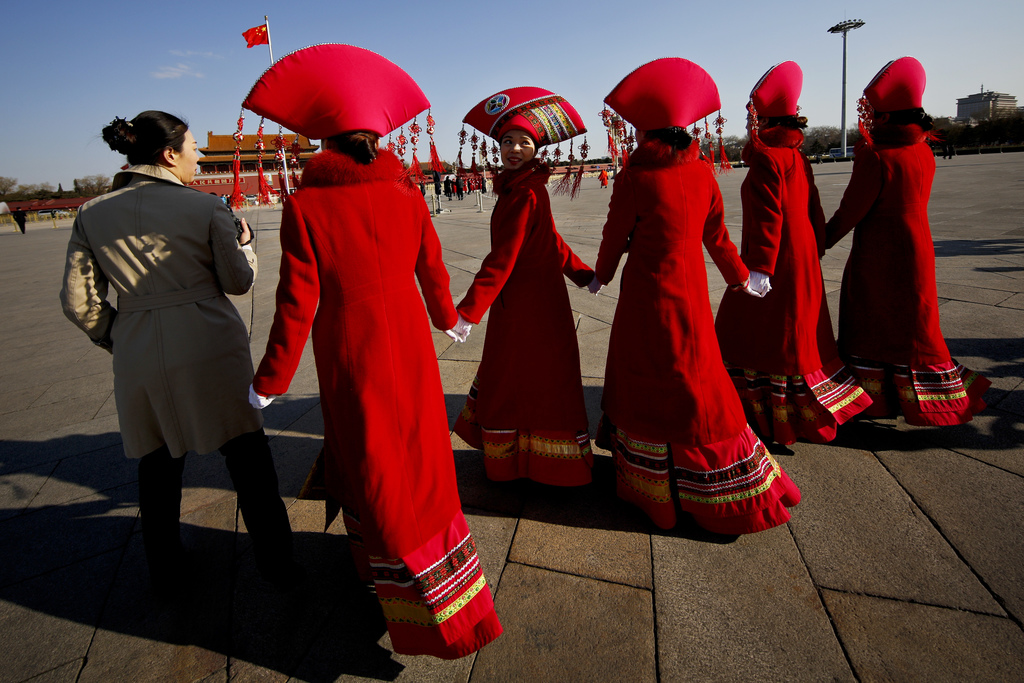 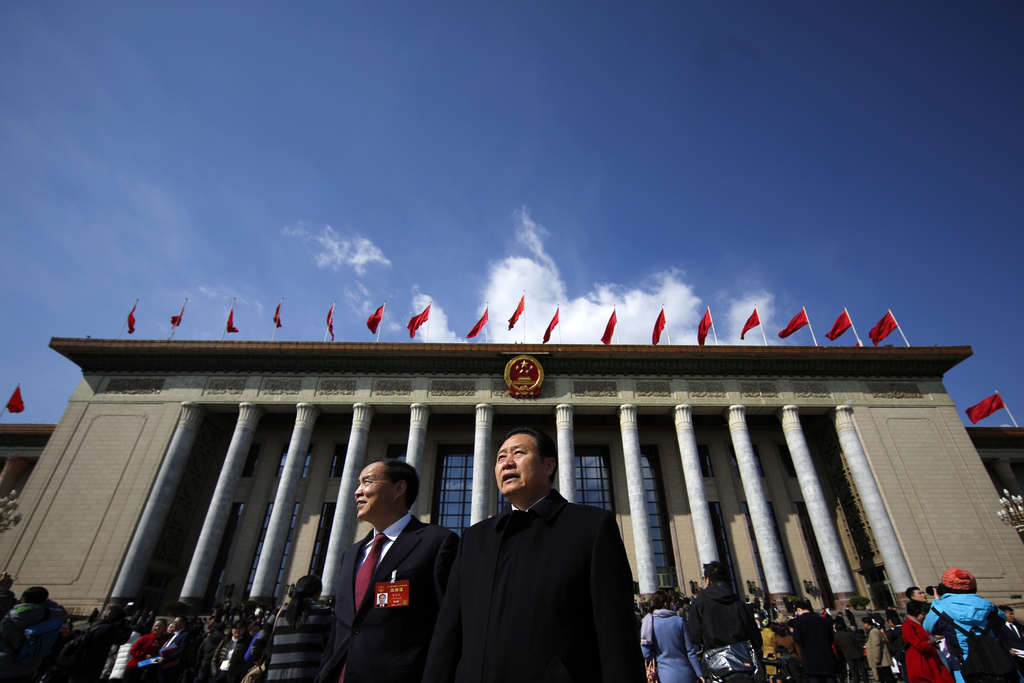 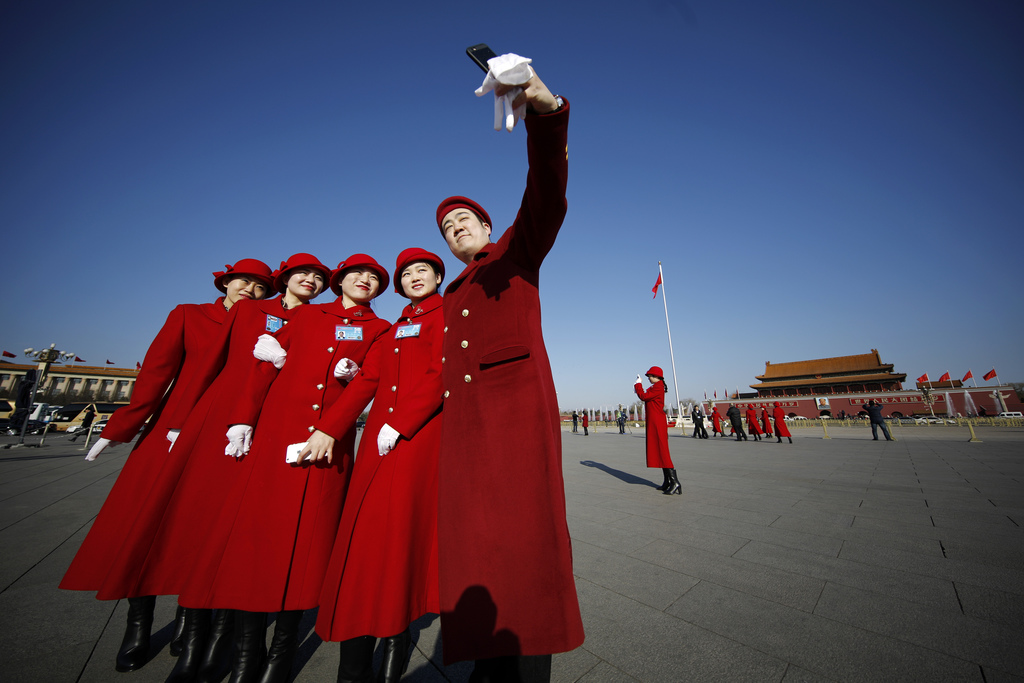 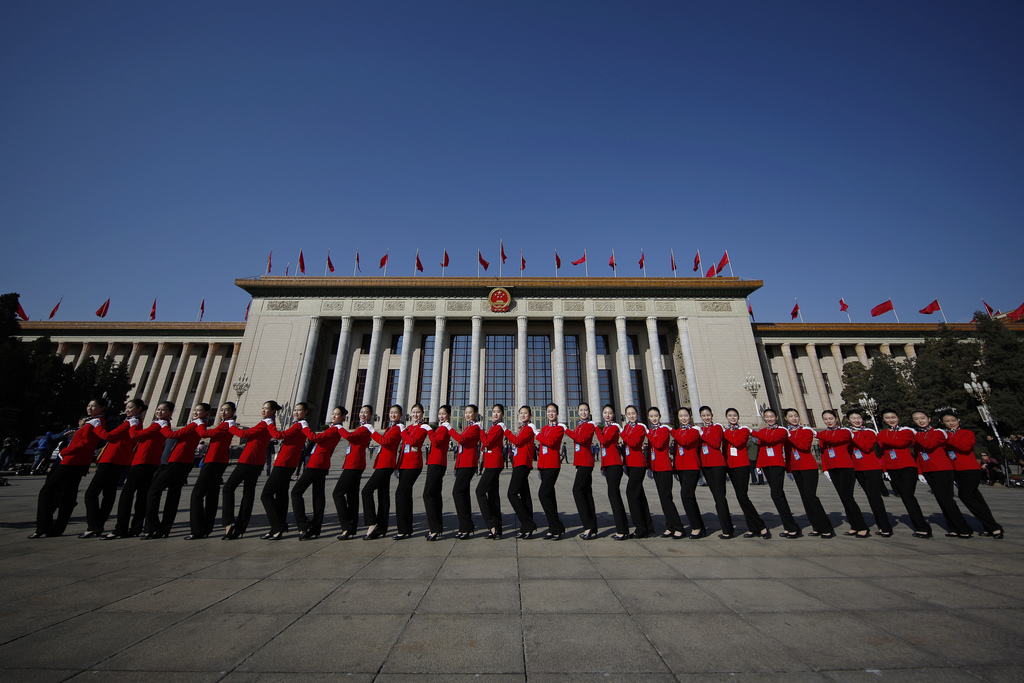 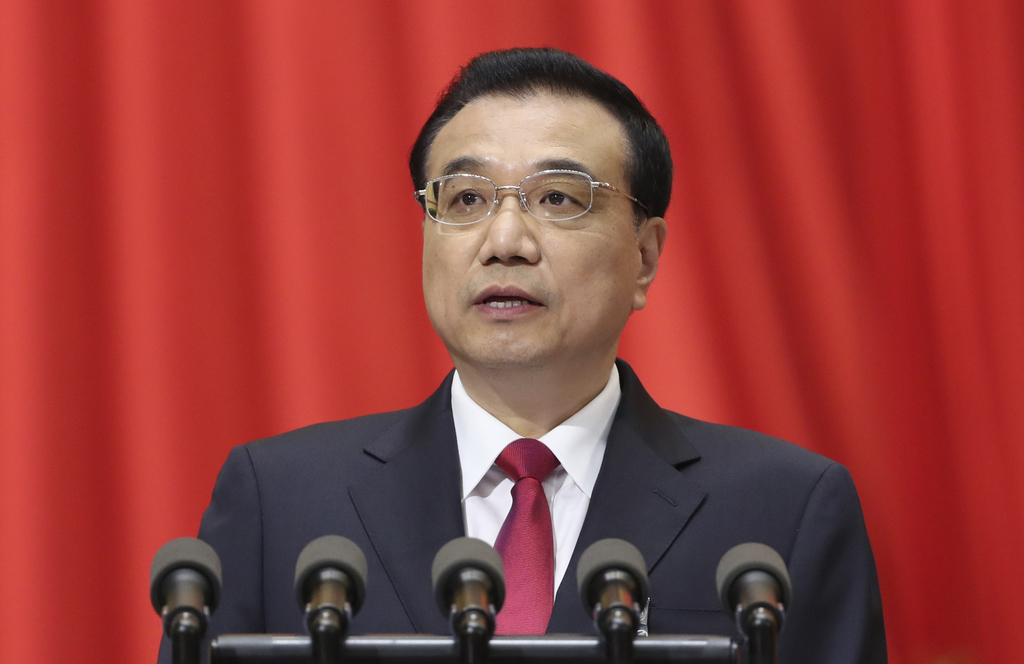 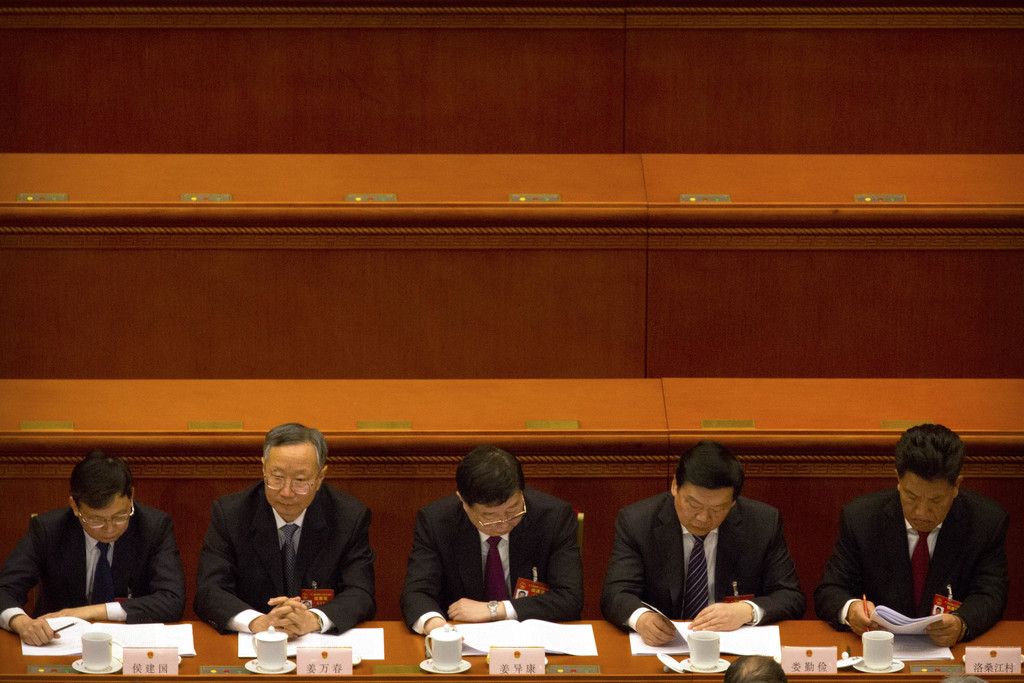 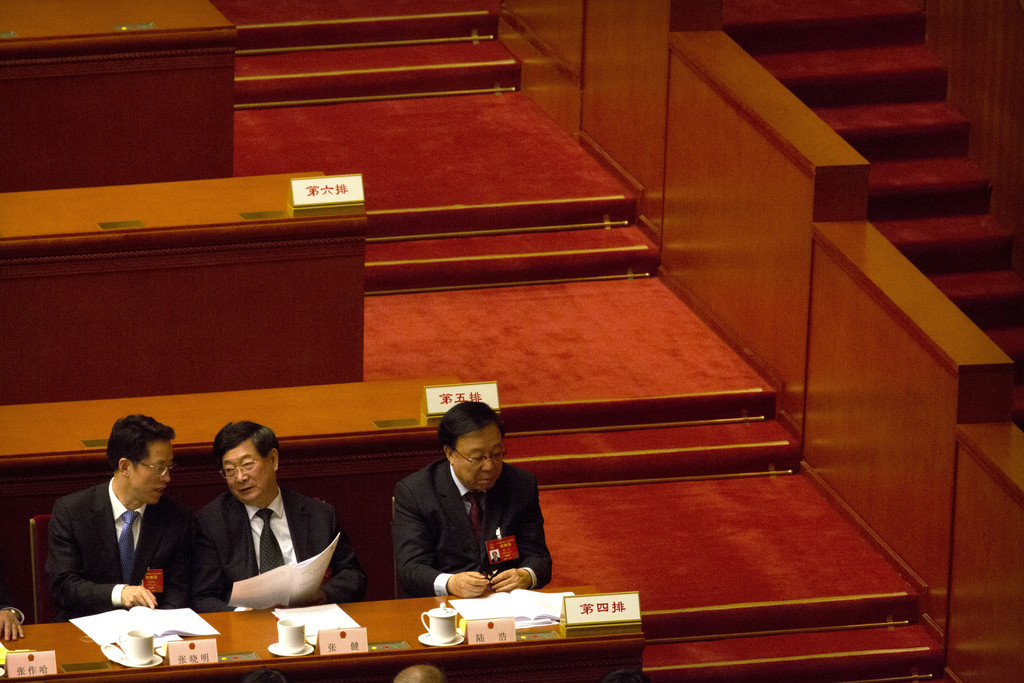 BEIJING (AP) — China's top economic official trimmed its growth target and warned Sunday of dangers from global pressure for trade controls as Beijing tries to build a consumer-driven economy and reduce reliance on exports and investment.

In a speech to the national legislature, Premier Li Keqiang promised more steps to cut surplus steel production that is straining trade relations with Washington and Europe. He pledged equal treatment for foreign companies, apparently responding to complaints Beijing is trying to squeeze them out of technology and other promising markets.

Li's report set the growth target for the world's second-largest economy at "around 6.5 percent or higher, if possible." That is down from last year's 6.7 percent expansion but, if achieved, would be among the world's strongest, reflecting confidence efforts to create new industries are gaining traction.

The premier called for attention to the risks of China's surging debt levels, which economists see as a rising threat to growth.

Li announced no major initiatives, but that was widely expected as the ruling Communist Party tries to avoid shocks ahead of a congress late this year at which President Xi Jinping is due to be given a second five-year term as leader. Analysts expect Chinese leaders to use the legislative meeting to emphasize reducing financial risks and keeping growth stable.

At a time of demands in the United States and Europe for trade controls, Li warned China faces "more complicated and graver situations" at home and abroad.

"Both the de-globalization trend and protectionism are growing," Li said. "There are many uncertainties about the direction of the major economies' policies and their spillover effects, and the factors that could cause instability and uncertainty are visibly increasing."

China "may be adversely affected" if Trump goes ahead with "tough policies," but the impact should be limited, said economist Song Lifang at Renmin University in Beijing.

"With China's domestic economy still in the phase of transformation, the tasks for China's economic growth are arduous but with great potential," said Song.

Growth has cooled steadily since 2010 as communist leaders try to develop a consumer-driven economy and reduce reliance on trade, heavy industry and investment.

The latest growth target is in line with those reforms and efforts to create a "moderately prosperous society," Li said.

Chinese leaders have tried to downplay the significance of the growth target and shift focus to improvements in incomes, consumer spending and other factors. But the target is closely watched as a forecast of economic performance, which has repercussions throughout Asia, where China is the biggest trading partner for all its neighbors.

Li acknowledged concerns about the rising dangers of debt, though he said the financial system is stable.

"We must be fully alert to the buildup of risks related to non-performing assets, bond defaults, shadow banking and Internet finance," said Li.

Banking and securities regulators already have said their priority this year is reducing risk and watching financial industries more closely following a 2015 stock price collapse and warnings investors are engaged in a dangerous new bout of speculative trading.

Beijing's reliance on repeated infusions of credit to prop up growth since the 2008 global crisis has driven up debt, prompting concern it could trigger a banking crisis or drag on the economy.

Total debt owed by local Chinese governments, companies and households has soared from the equivalent of 150 percent of annual economic output before 2008 to about 260 percent. Regulators have begun trying to hammer out deals to reduce debt loads at state companies but private sector economists say they need to move faster.

Economists have warned setting a growth target too high could force Beijing to resort to stimulus spending, setting back efforts to reduce reliance on investment and debt.

Li promised to eliminate 50 million metric tons of steel production capacity. That would help to reduce the flood of Chinese exports that is depressing global prices and prompting complaints by Washington and Europe that thousands of jobs are in danger.

Li promised "equal opportunities" and "fair rules" to private companies in the state-dominated economy. He promised changes including cutting taxes for the smallest businesses and simplifying the process of registering up a private company.

Party leaders have pledged repeatedly to give entrepreneurs, who create most of China's new jobs and wealth, a bigger economic role. But reform advocates complain state companies still control industries from banking to telecoms to energy and benefit from monopolies, low-cost bank loans and other favors.

That follows complaints by U.S. and European business groups that Beijing appears to be trying to squeeze foreign companies out of promising markets including software and other technology.

"We will resolutely oppose and contain separatist activities for Taiwan independence," he said.

A spokeswoman for the legislature told reporters Saturday that spending on China's military, the world's second-highest after the United States, would rise 7 percent this year. However, unlike in previous years, no budget figure was released.

Beijing's military spending has grown by double digits almost every for most of the past two decades.