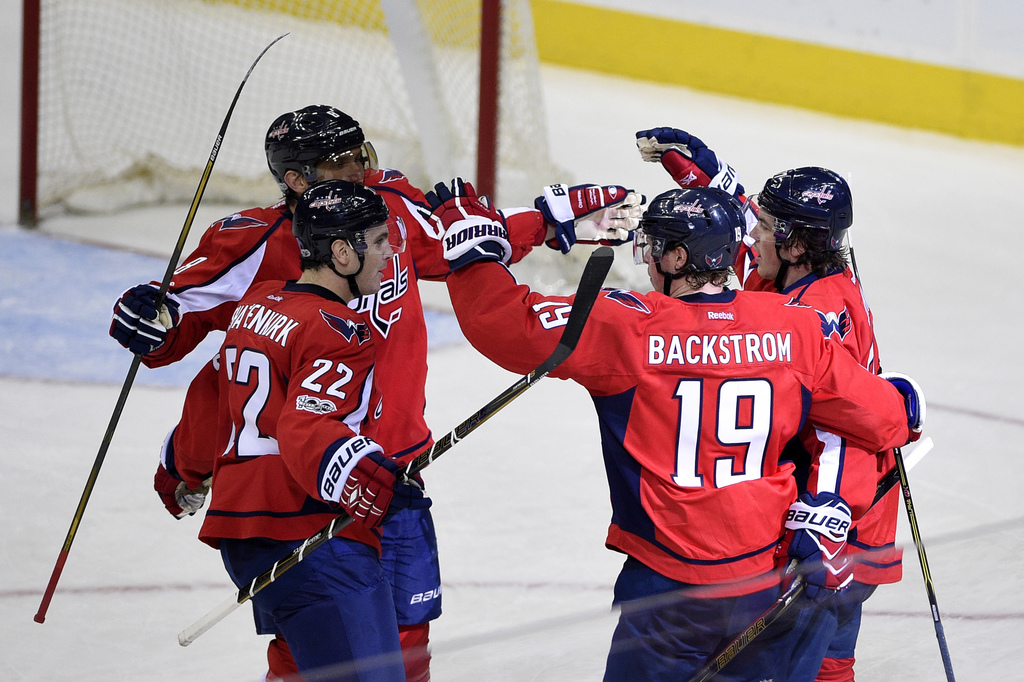 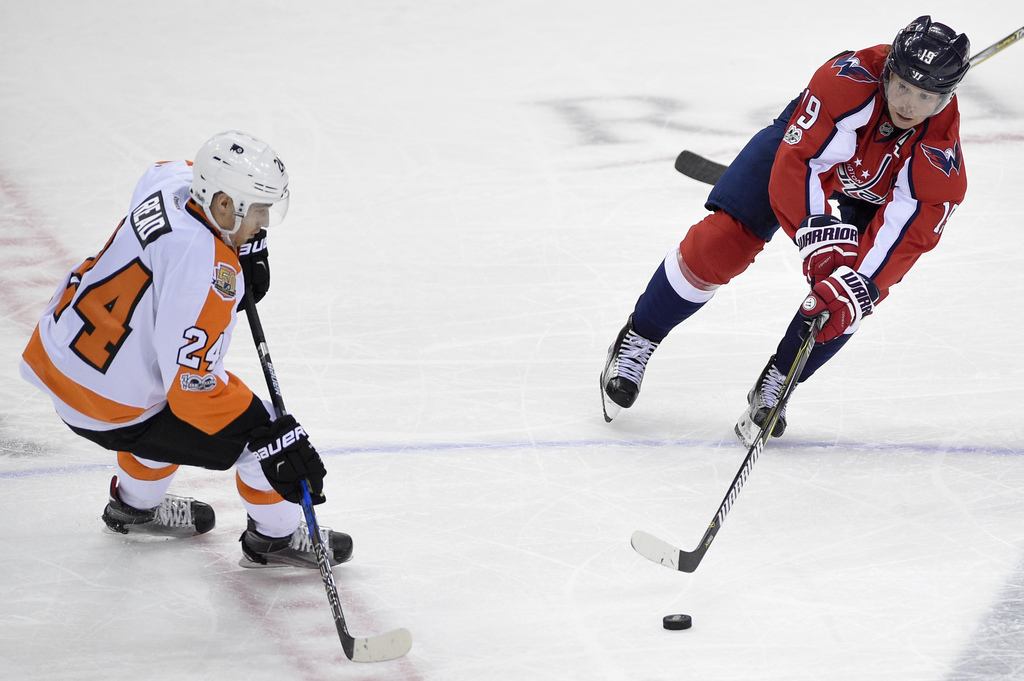 WASHINGTON (AP) — Nicklas Backstrom scored a power-play goal in overtime to lift the Washington Capitals over the Philadelphia Flyers 2-1 on Saturday night and extend their franchise-record home winning streak to 15.

Backstrom ended the Capitals' power-play frustrations by beating Steve Mason 3:25 into overtime for his 20th goal of the season. It came with Flyers defenseman Michael Del Zotto in the penalty box for holding, the 12th minor penalty of the game.

Dmitry Orlov also scored for NHL-leading Washington, which got 30 saves from Braden Holtby. Mason stopped 22 of 24 shots, while Sean Couturier snapped out of his offensive slump to score Philadelphia's goal.

The Flyers went 0 for 6 on the power play and are 0 for 15 this season against the Capitals.

NASHVILLE, Tennessee (AP) — Brian Campbell scored with 1:05 remaining to lead the Chicago Blackhawks over the Nashville Predators for their seventh straight win.

Viktor Arvidsson scored twice and Calle Jarnkrok also had a goal for Nashville, which has lost two straight.

NEW YORK (AP) — Carey Price made 26 saves and the Montreal Canadiens extended their winning streak to five games with a victory over the New York Rangers.

Shea Weber, Artturi Lehkonen, Andrew Shaw and Jordie Benn scored for the Canadiens, who are in first place in the Atlantic Division.

Max Pacioretty and Alex Galchenyuk each had two assists for Montreal, which has won six of seven. That streak started with a shootout win over the Rangers on Feb. 21 at Madison Square Garden.

Chris Kreider scored and Henrik Lundqvist made 31 saves for the Rangers, who have lost three of their past four.

BOSTON (AP) — Ryan Spooner scored midway through the third period to lift the Boston Bruins over the New Jersey Devils for their eighth victory in 10 games under interim coach Bruce Cassidy.

Kyle Palmieri and Devante Smith-Pelly had goals for the Devils, who dropped their sixth straight (0-4-2) as their playoff hopes continue to fade. Cory Schneider made 37 saves.

Tyler Johnson scored in regulation for the Lightning and Andrei Vasilevskiy made 31 saves as Tampa Bay bounced back on the second night of a back-to-back after losing 5-2 in Pittsburgh on Friday.

Ryan O'Reilly had a goal and Robin Lehner made 31 saves for Buffalo, which has lost four of five — and all three meetings with Tampa Bay this season. The Sabres were without leading scorer Kyle Okposo, who has injured ribs and will be out at least a week.

Klingberg shot from the right circle and the puck went high into the net over the shoulder of James Reimer. The Stars won for the fourth time in six games.

Jamie Benn also scored a goal and had an assist for Dallas. Kari Lehtonen made 41 saves. Tyler Seguin had two assists.

Jonathan Huberdeau scored the Panthers' goal. Reimer made 32 saves for Florida, which has lost five of its past six.

Viktor Stalberg got his first goal since joining the Senators ahead of Wednesday's trade deadline. Erik Karlsson scored his 11th of the season and Craig Anderson made 25 saves.

Brandon Saad and Sam Gagner scored for the Blue Jackets. Joonas Korpisalo played just his eighth game this season and made 24 saves. This was the first regulation loss for Columbus in five games (3-1-1).

WINNIPEG, Manitoba (AP) — Blake Wheeler and Nikolaj Ehlers each had a goal and two assists, leading the Winnipeg Jets past the Colorado Avalanche.

Making his 10th straight start in goal, Connor Hellebuyck almost had his second straight shutout for the Jets until Gabriel Landeskog scored with 15.4 seconds left in the game. He made 22 saves a day after he had a 29-save shutout against the St. Louis Blues.

Ben Chiarot added his first goal of the season in his 53rd game, and Jacob Trouba had his sixth.

EDMONTON, Alberta (AP) — Connor McDavid had a goal and an assist and the Edmonton Oilers started an eight-game homestand with a victory over the Detroit Red Wings.

McDavid blazed past a pair of defenders and beat goalie Petr Mrazek on the backhand for his 22nd goal of the season just two minutes into the game.

LOS ANGELES (AP) — Sven Baertschi scored twice, Ryan Miller made 41 saves and the Vancouver Canucks ended a four-game losing streak by holding on for a win over the Los Angeles Kings.

Henrik Sedin had a goal, Nikolay Goldobin scored in his Canucks debut and Bo Horvat had three assists as Vancouver won in regulation for just the second time in its last nine games.

Trevor Lewis and Anze Kopitar each scored a power-play goal, Alec Martinez scored a short-handed goal and Ben Bishop made 17 saves in his home debut for Los Angeles, which missed out on a chance to move three points ahead of St. Louis for the second wild card in the Western Conference.