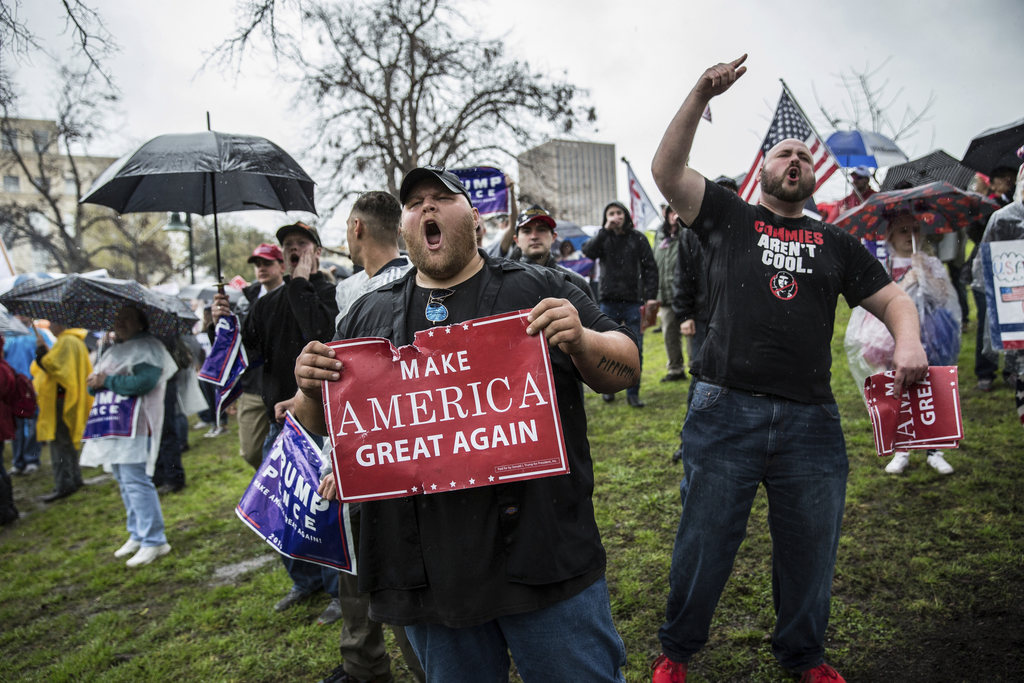 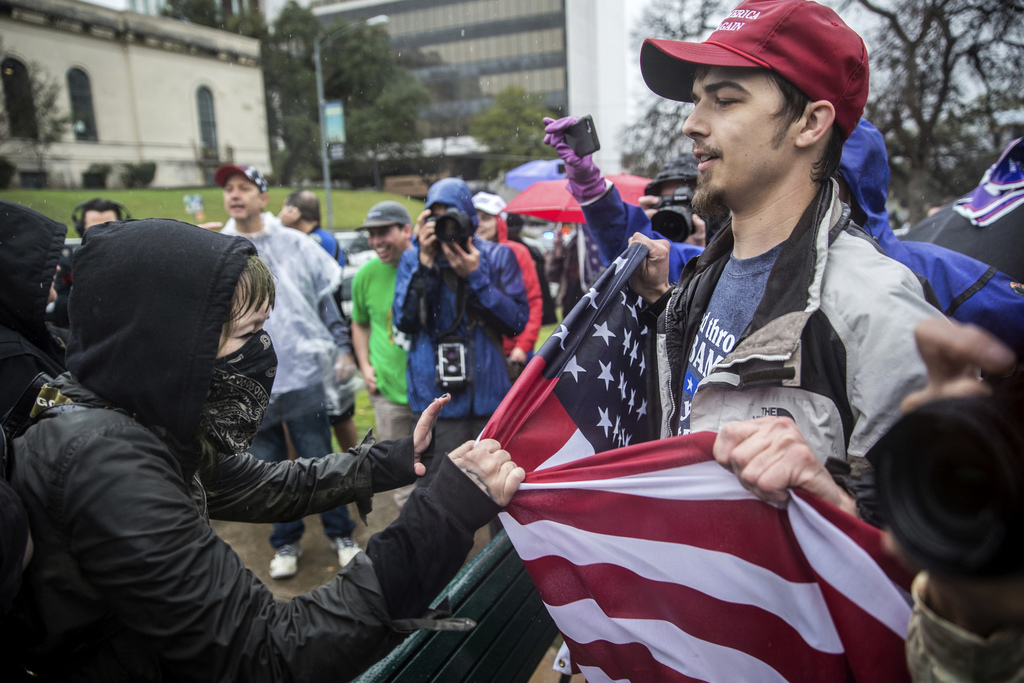 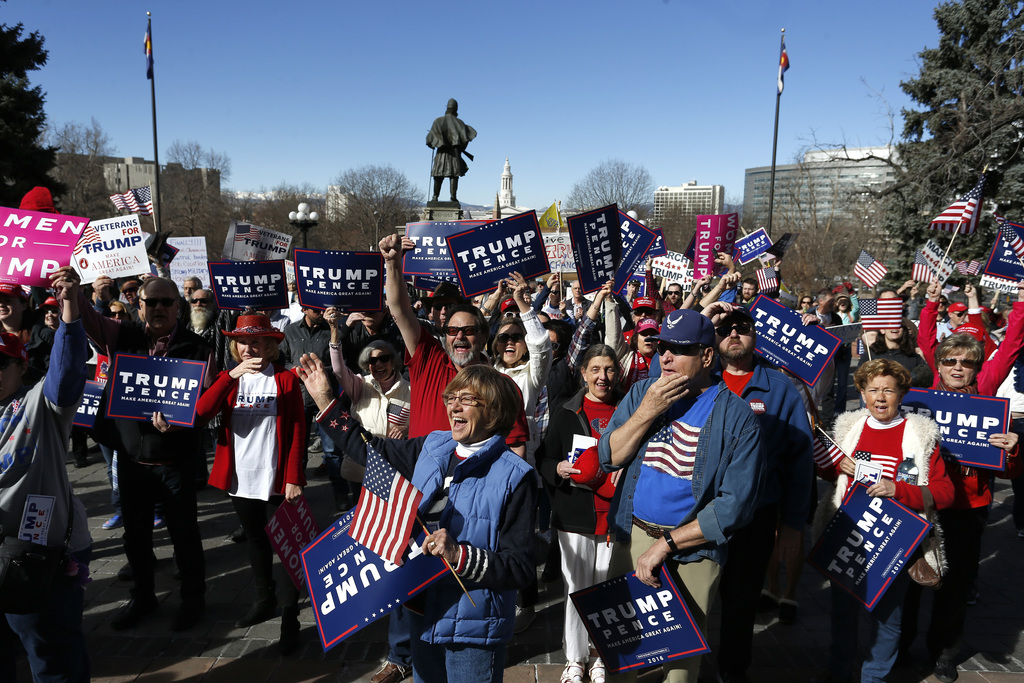 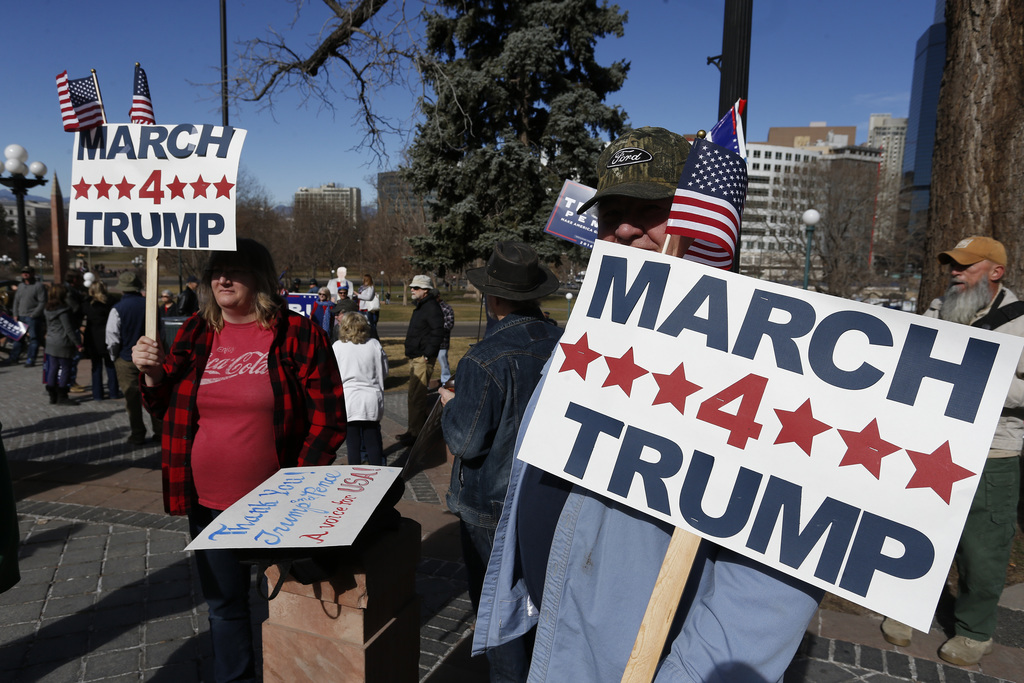 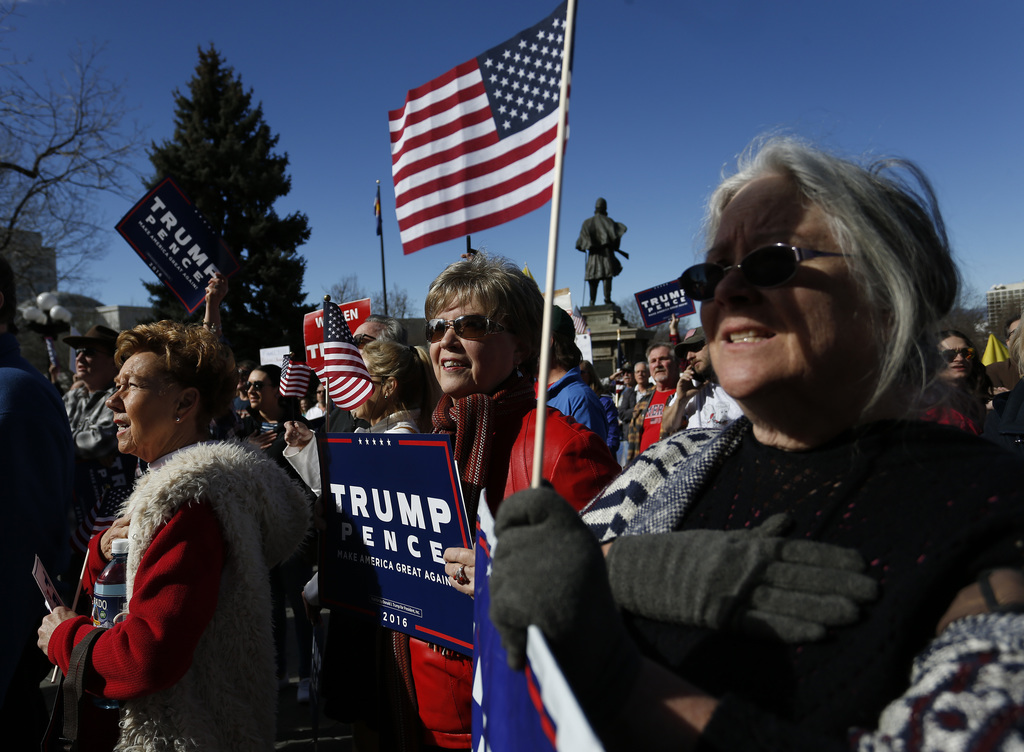 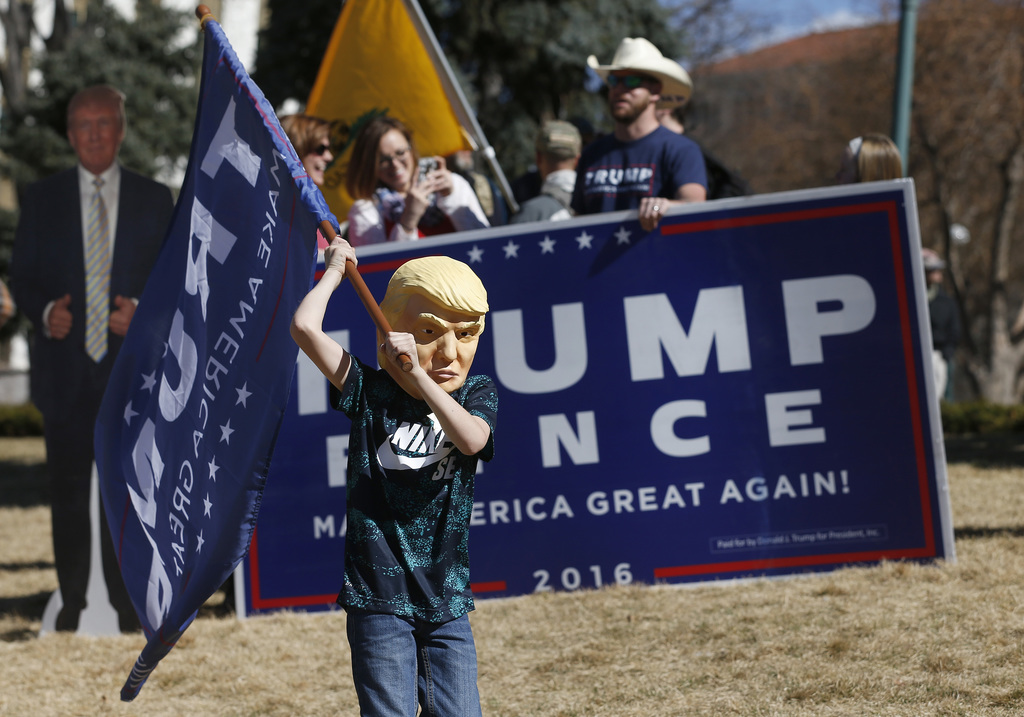 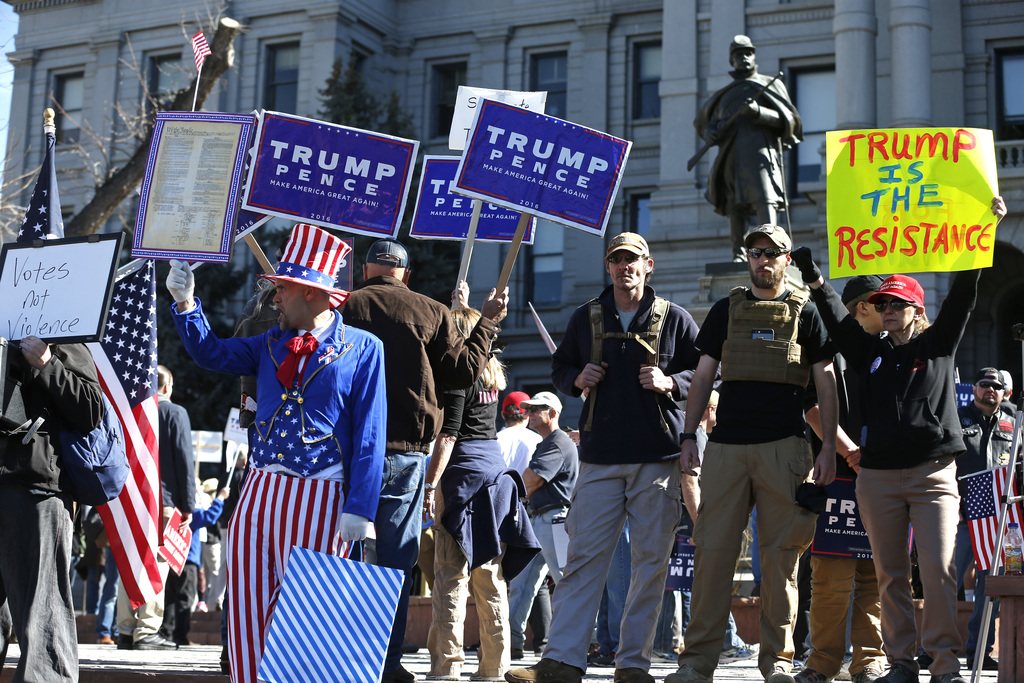 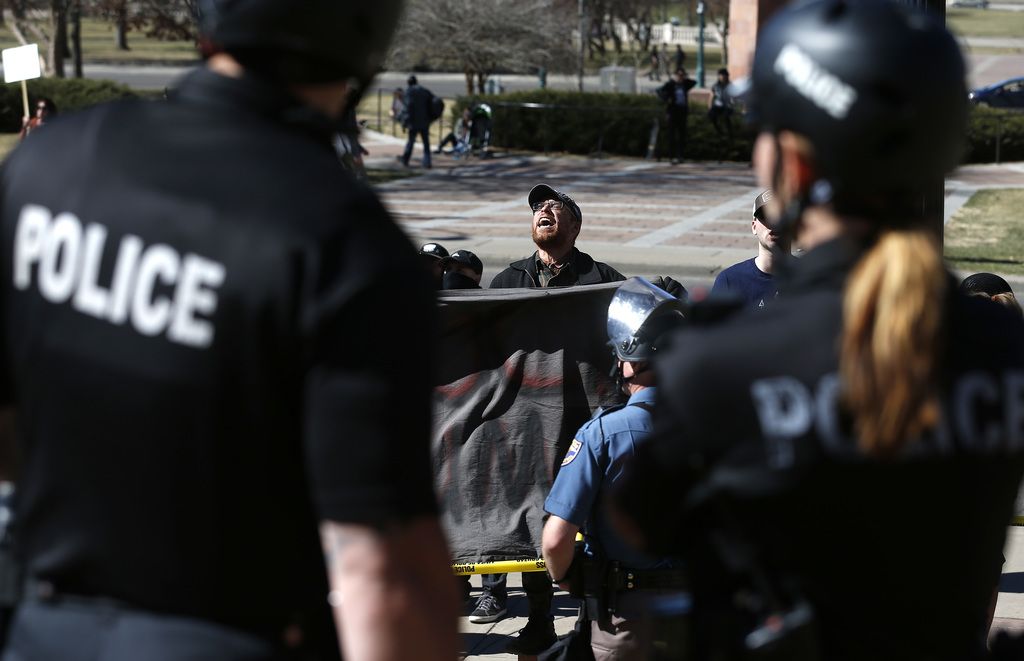 NEW YORK (AP) — The Latest on rallies held across the country in support of President Donald Trump (all times local):

Two people were arrested as protesters clashed with supporters of President Donald Trump during a rally at the Tennessee Capitol in Nashville.

WPLN reports (http://bit.ly/2mRr8SG) that at Saturday's pro-Trump rally, the groups at times cursed at each other and made physical contact, which state troopers broke up.

Dozens of officers were on site and a law enforcement helicopter hovered overhead. Tennessee Highway Patrol spokesman Lt. Bill Miller said someone was arrested for stealing two Trump shirts, and an anti-Trump protester was arrested for trying to incite a riot and calling for violence.

Several Republican lawmakers and other figures spoke at the event.

One Trump opponent took another approach. He brought camping chairs, held a sign that said "Talk to a Democrat" and sat with Trump supporters to discuss their differences.

From Colorado's state Capitol to Trump Tower in New York and the Washington Monument, groups of hundreds of people rallied for President Trump Saturday, waving "Deplorables for Trump," signs and even carrying a life-size cutout of the president.

The March 4 Trump demonstrations were planned around the country, and supporters clashed with generally smaller groups of counter protesters. Six people protesting the rally in St. Paul, Minnesota, were arrested on felony riot charges after they lit fireworks inside the Minnesota State Capitol and fled, police said. About 400 people attended the St. Paul event, and about 50 showed up to protest it. Some other minor scuffles between the dueling demonstrators were quickly defused.

Near Mar-a-Lago, the Palm Beach Post reported that people on both sides exchanged profanity. Trump's motorcade briefly stopped so he could wave at supporters.

Supporters of President Donald Trump are convening near Trump Tower, the Washington Monument and several other places around the country in marches to show their pride in his presidency.

Saturday's "March 4 Trump" demonstrations are also intended to show unity in the face of what organizers call "a seditious fringe" aiming to sabotage his vision for the country.

A couple hundred supporters gathered in New York near Trump Tower, chanting "U-S-A." One held a sign reading: "I am not a Democrat anymore." Another read: "Yes he is our president."

A rally at the Ohio Statehouse in Columbus turned into a clash of words when Trump protesters shouted "No Trump, No KKK, No Fascist USA" over the supporters' "U-S-A" chants.

Supporters of President Donald Trump plan to convene at Trump Tower, the Washington Monument and scores of other places around the country in marches to show their pride in his presidency.

Saturday's "March 4 Trump" demonstrations are also intended to show unity in the face of what organizers call "a seditious fringe" aiming to sabotage his vision for the country.

Trump supporters have held rallies in recent weeks to counter demonstrations against him, including women's marches the day after his inauguration and protests over his since-blocked executive order halting acceptance of refugees and temporarily barring citizens of seven Muslim-majority countries from traveling to the U.S.

There were pro-Trump demonstrations in Monday in cities ranging from Denver to Atlanta. Trump himself also held a campaign rally in Florida Feb. 18.