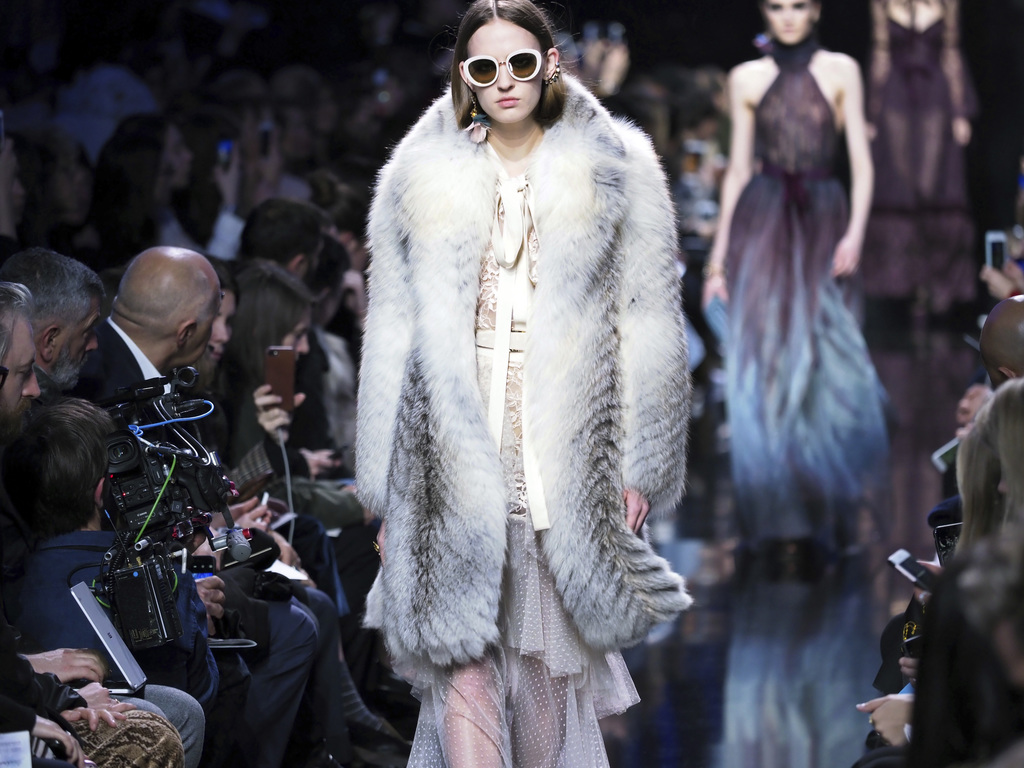 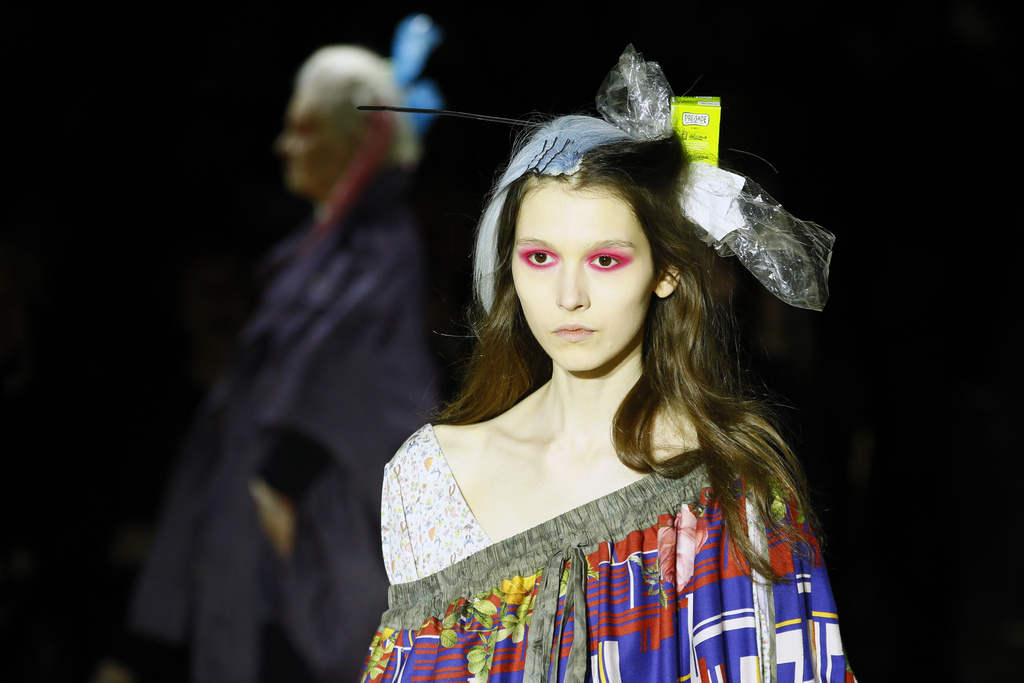 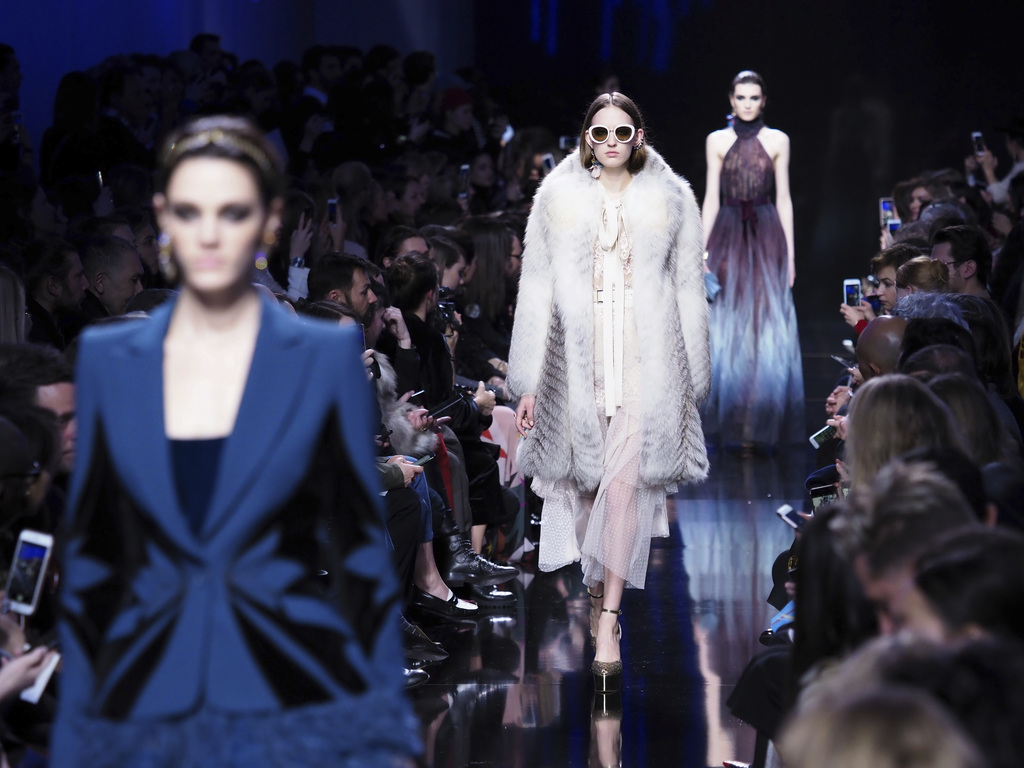 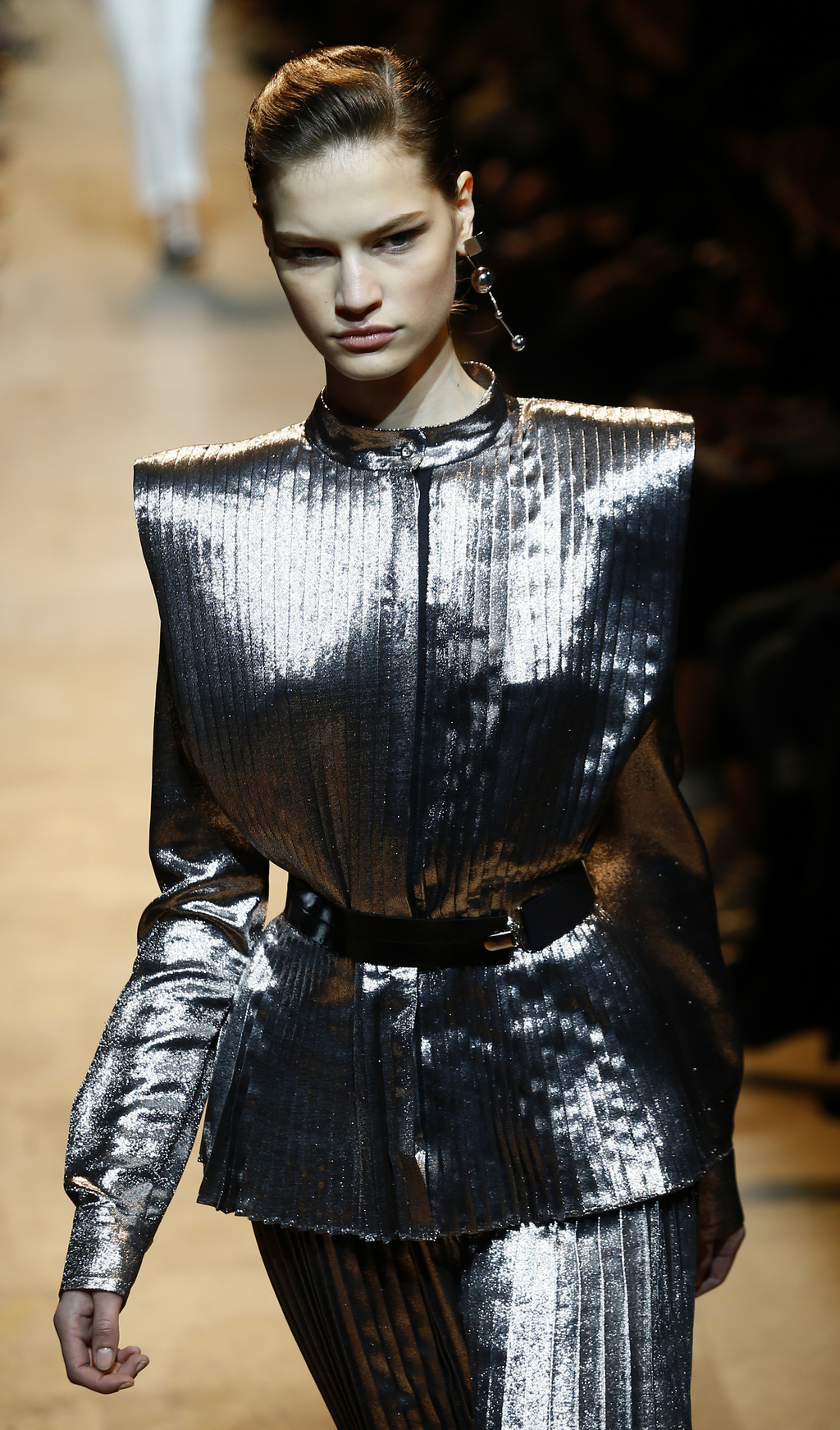 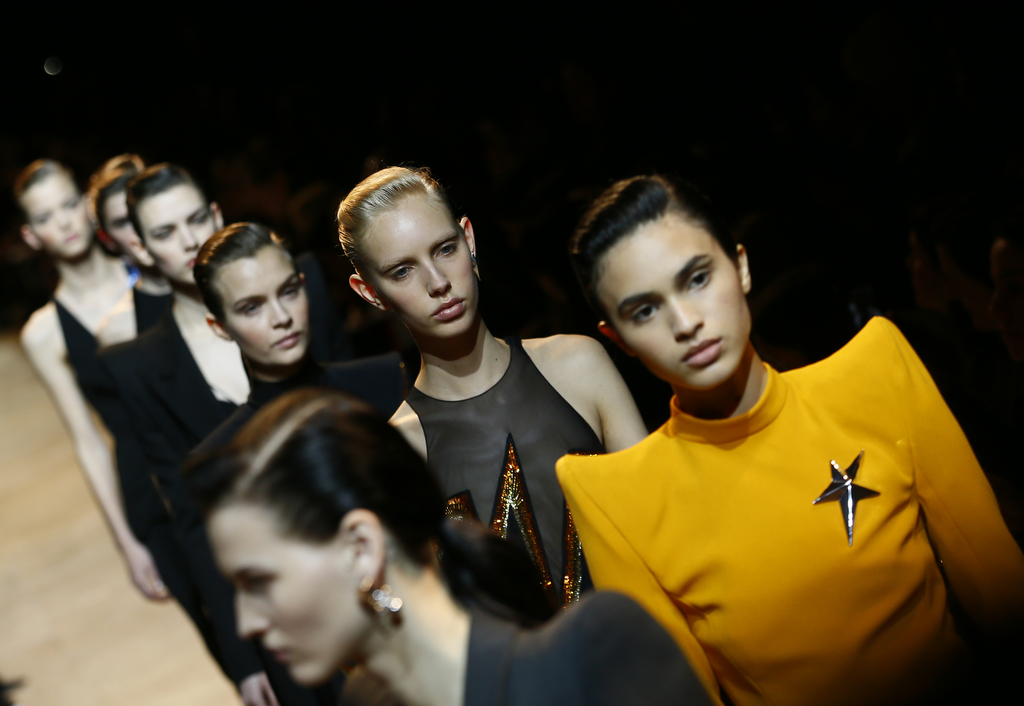 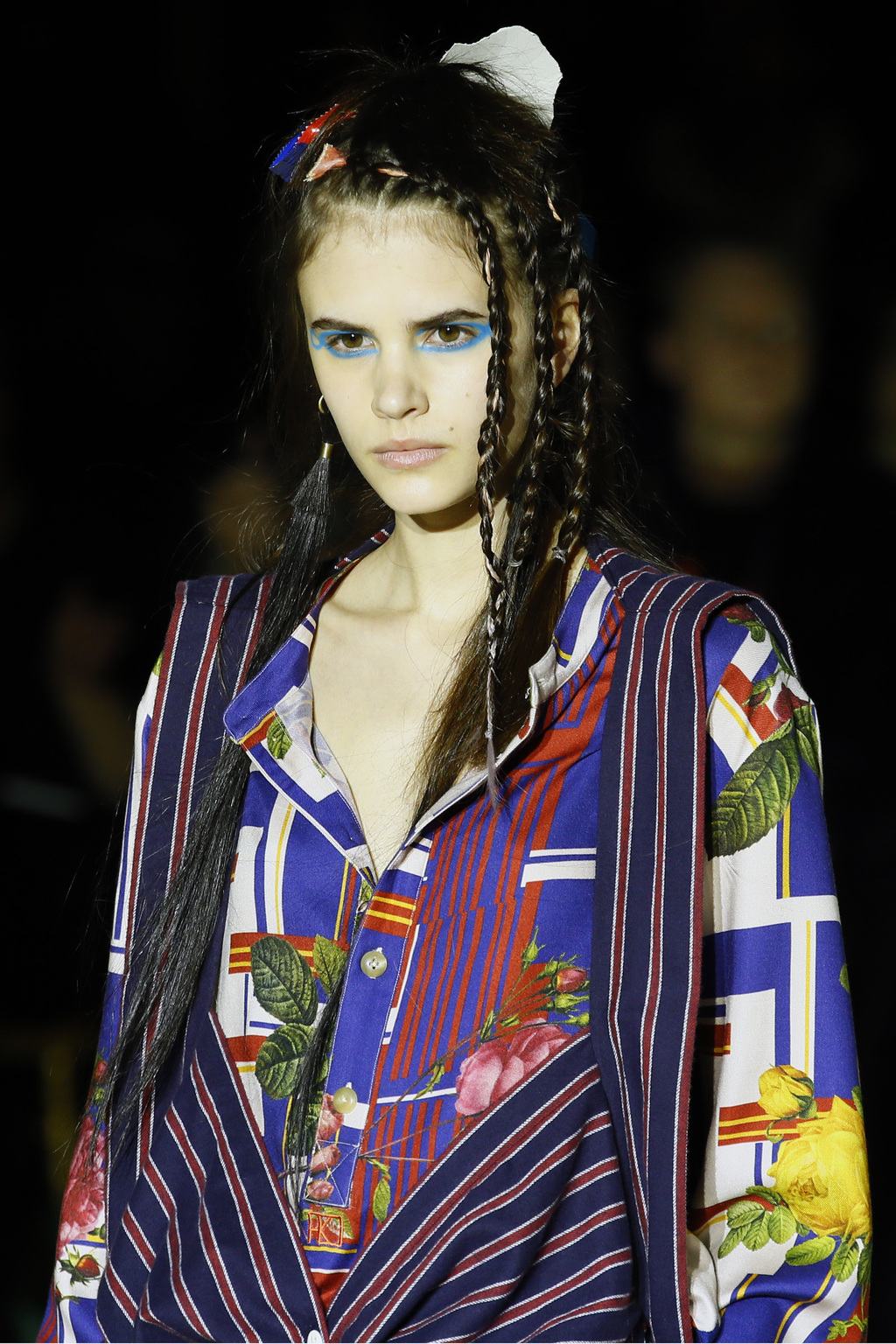 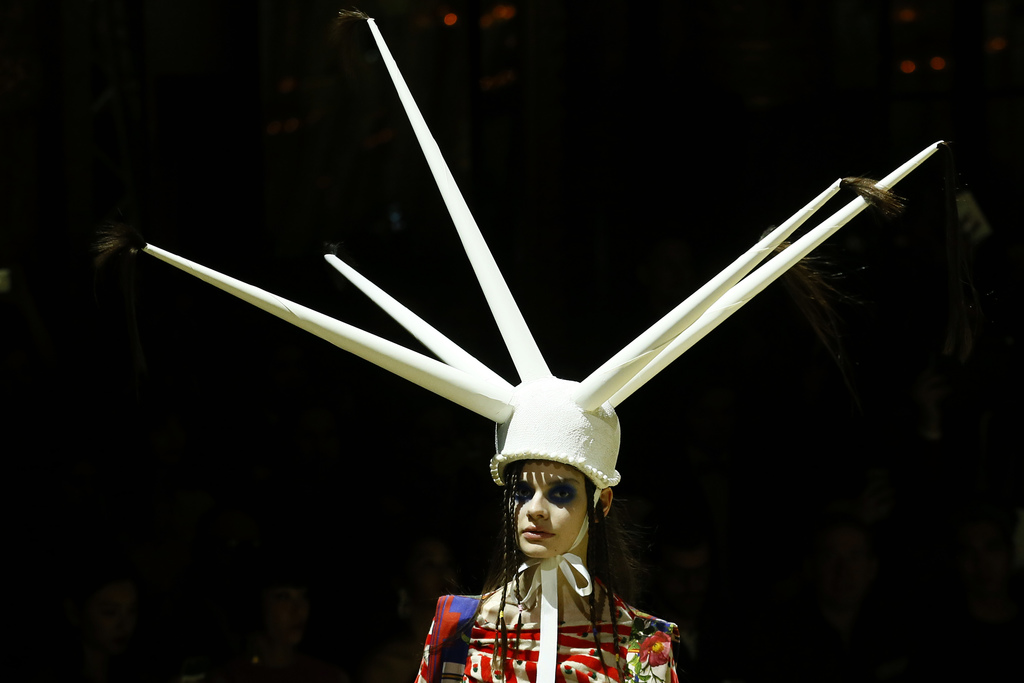 PARIS (AP) — It was designer Elie Saab's first collection since his coup of dressing Meryl Streep for the Oscars following the actress' high-profile spat with Chanel.

Dark romanticism wafted in the air with decorative gowns made from velvet, feathers, ribbon and lace — against the set of dark shards of blue light.

The heavy materials at the ready-to-wear show added a textural, almost supernatural quality that evoked the mood of the strange 19th-century ballet in which supernatural women who dance men to death summon Giselle from her grave.

There were some lighter touches too. Tulle organza and silk chiffon fluttered by on diaphanous gowns with high necks that borrowed from Victorian or Edwardian styles.

But the collection tried to do too much.

Overly divergent styles — such as thigh-high leather boots, an electric blue fur coat and black biker jacket — took away from the collection's coherence.

The celebrity sibling models Bella, 20, and Gigi, 21, continue to dominate coverage at Paris Fashion Week for both professional and personal reasons — their every move is snapped by photographers.

Gigi Hadid was branded a rock of solidarity by the fashion press simply for holding the hand of her sister, Bella, at H&M's runway show as they strutted out for the finale awkwardly past Bella's ex-boyfriend, The Weeknd, who was performing.

Then, there was a media alert sent out because Gigi went outside Friday night with partner Zayn Malik in a revealing Adam Selman Gingham shirt and hoopla earrings.

Friday night also saw Bella crowned the face of Dior's new Diorshow Pump & Volume mascara. She posed for cameras at the posh launch party in Paris' 16th arondissement in a sheeny, satin bustier gown, with a folder petal-like detail at the bust.

It's a mania that's not going away soon.

David Bowie may be gone but his influence in fashion is still alive and strutting.

Designer David Koma's '80s-themed womenswear show for Mugler had more than a hint of the music icon's famously androgynous styles.

It made for quite a fashion spectacle.

This exaggerated silhouette was complemented with tight '80s uber-minis, shimmering asymmetrical pleating on skirts and tightly ribbed structured tops. Hair was pulled back, in a chic twist on the styles of the Glam Rock era, in a small quaff with side parting.

But the London-based Georgian designer's references lacked subtlety at times.

The bright yellow looks (with Star Trek-style star buttons at the breast) the otherwise-creative collection could simply have done without.

Front row talk at Saturday's collections touched on the remarkable "invitation" sent out by Stella McCartney.

The house provoked much curiosity among fashionistas after sending out mysterious emails noting that this season's invite was so large in couldn't fit in a post box, and needed to be personally hand delivered.

Upon delivery, the invite-cum-package proved worthy of such curiosity.

It was a huge pink cylinder that opened to reveal a bouquet of 35 vivid orange water balloons on sticks all connected to a central nozzle.

Inside was the message "Let's have a water fight."

Instructions were included on how to prepare for the aquatic battle: Connect the nozzle to your tap and rest the balloons on a level surface, until 8 centimeters (3.15 inches) in diameter. The balloons fasten automatically.

Let's hope the fights will have ended come Monday's Stella McCartney show, lest the precious silks of the collection get wet.

Thomas Adamson can be followed at www.twitter.com/ThomasAdamson_K