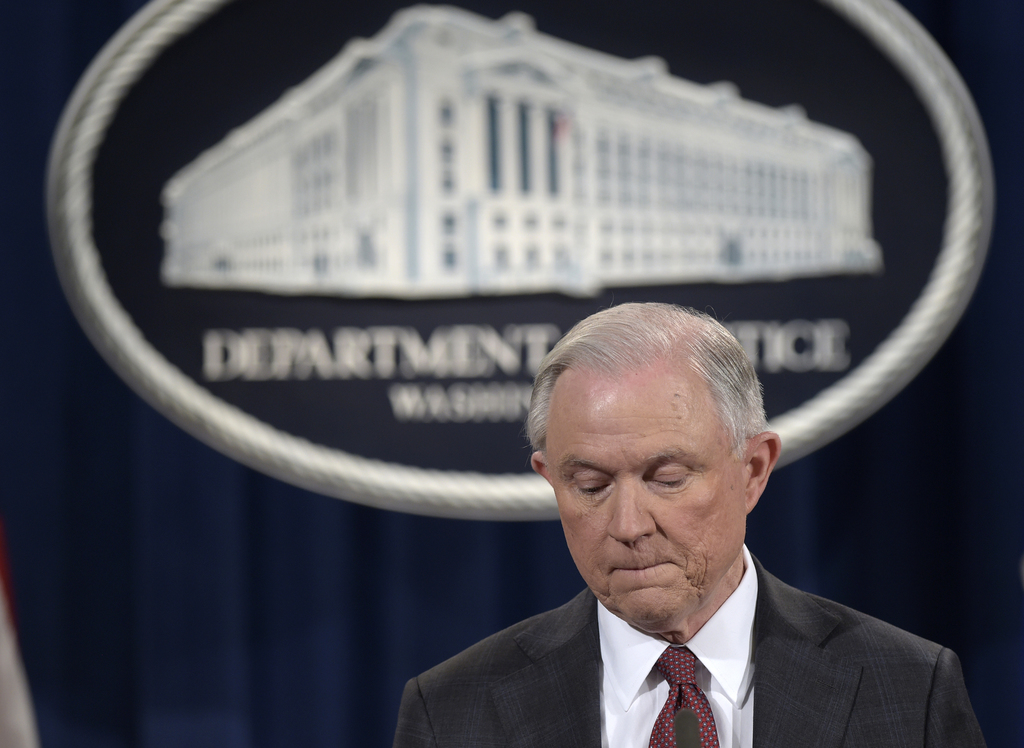 WASHINGTON (AP) — The political cloud over Attorney General Jeff Sessions' decision to step back from any investigation touching the Trump campaign may have a silver lining for a law enforcement officer who appears preoccupied by violent crime, drugs and immigration.

Now that Sessions will no longer oversee any investigation into the 2016 election, his path to continue a refashioning of the Justice Department may be even clearer.

Those efforts began almost immediately after he was sworn in last month. While Thursday's announcement may have taken attention from trying to chip away at Obama administration priorities, Sessions seems poised to resume the mission he carried into the job.

Sessions' early words and actions are consistent with the tough-on-crime reputation the former federal prosecutor cultivated as an Alabama senator, and they foreshadow an unmistakable pivot in critical areas of civil rights, criminal justice and drug policy.

New attorneys general routinely arrive with their own agendas. But the speed with which Sessions has moved to undo some of the legacy items of his Democratic-appointed predecessors has dismayed critics and caused observers to take notice.

"There have been transitions before where the department headed off in new directions, but there is traditionally a period of new people coming in and studying and learning about issues before taking bold and dramatic new policy directions," said William Yeomans, who spent nearly 30 years at the department. "This is probably unprecedented in the speed and dramatic change in course that's happened."

In a matter of weeks, the Sessions Justice Department lifted anti-discrimination guidelines meant to ensure transgender students could use school restrooms of their choice. He repealed a memo that directed the department to phase out the use of private prisons, signaling he sees them as necessary for the future. The department also changed its position in a critical voting rights case in Texas, abandoning its yearslong opposition to a critical aspect of the state's voter ID law.

Sessions has hinted at a reversal of the department's more hands-off position on marijuana enforcement, saying there's more violence surrounding the drug than "one would think." And though the Justice Department's push to overhaul troubled police agencies was a staple effort of the last administration, Sessions announced his desire to "pull back" on federal scrutiny of local law enforcement, winning praise from some quarters.

"Support for the police particularly in these trying times is extremely welcome and good news to our members," said Jim Pasco, executive director of the National Fraternal Order of Police. "It's refreshing and welcome and no less than we would expect from Jeff Sessions."

But others are concerned the early points of focus distract attention from law enforcement challenges that have consumed the Justice Department and which it is most uniquely positioned to address.

For instance, Sessions has yet to publicly talk about how best to disrupt the pressing cyberthreats from overseas that are capable of siphoning American corporate secrets or hacking into U.S. political operations. He hasn't talked about preventing Americans from being inspired to violence by Islamic State propaganda.

The Justice Department can't "tackle all criminal justice challenges" and must use its resources in a smart and targeted way, said Timothy Heaphy, a former U.S. attorney for the Western District of Virginia who was nominated by President Barack Obama.

"My fear," Heaphy said, "is that the new department is not as mindful of those resource constraints and seems to want to pursue a more ideological agenda, and I think that could be both ineffective and costly."

Even as Sessions outlined his vision for the department at his confirmation hearing, he was tailed by questions about whether he would withdraw from any investigation involving the Trump campaign and Russian meddling in the election. At his first news conference, following revelations about two undisclosed conversations with the Russian ambassador, he announced he would step away from any such investigation.

It won't be the first time an attorney general has shifted the department's priorities.

Obama's first attorney general, Eric Holder, set aside a criminal justice memo from his Republican predecessor, John Ashcroft, to charge people with the most serious, provable offenses and replaced it with his own policy of discouraging harsh mandatory minimum sentences for nonviolent crime.

Sessions' actions are not surprising given his role as an architect of President Donald Trump's policies, and they appear consistent with views expressed over 20 years in the Senate.

Sessions warned in Congress about crime and drugs. He already has followed that as attorney general, announcing a task force to study the problem and pledging to dismantle international cartels. He expressed concern last year about legislation he feared could lead to the early release of felons, and moved quickly at the Justice Department to ensure privately operated prisons would be available for continued use.

But the pivot on civil rights matters is striking especially given that they had been Obama administration priorities.

Top officials with the NAACP said their worries remain even after a private meeting to which Sessions invited them.

"He said we would agree on some things and disagree on others, and he was committed to enforcing civil rights law as he sees it," said NAACP President Cornell William Brooks.

The Justice Department opened about two dozen investigations of police departments under Holder and successor Loretta Lynch. But Sessions, who says he's concerned those investigations can harm officer morale, will almost certainly scale back those efforts.

The changed legal positions already advanced by Sessions means minority voters looking to prove that the state's strict voter ID law is intentionally discriminatory will probably have to do without the federal government's backing, as will transgender students who argue that the law allows them to use the bathroom that matches their gender identity.

Yeomans said that though changes in litigating positions do occur and are sometimes dictated by court deadlines, the department must always be concerned not to undermine its own legitimacy by too drastic a reversal.

"When it has been taking one position in court, and suddenly comes back in and takes the opposite position — and the only thing that's changed is an election — it looks like the department is being driven by politics," Yeomans said.