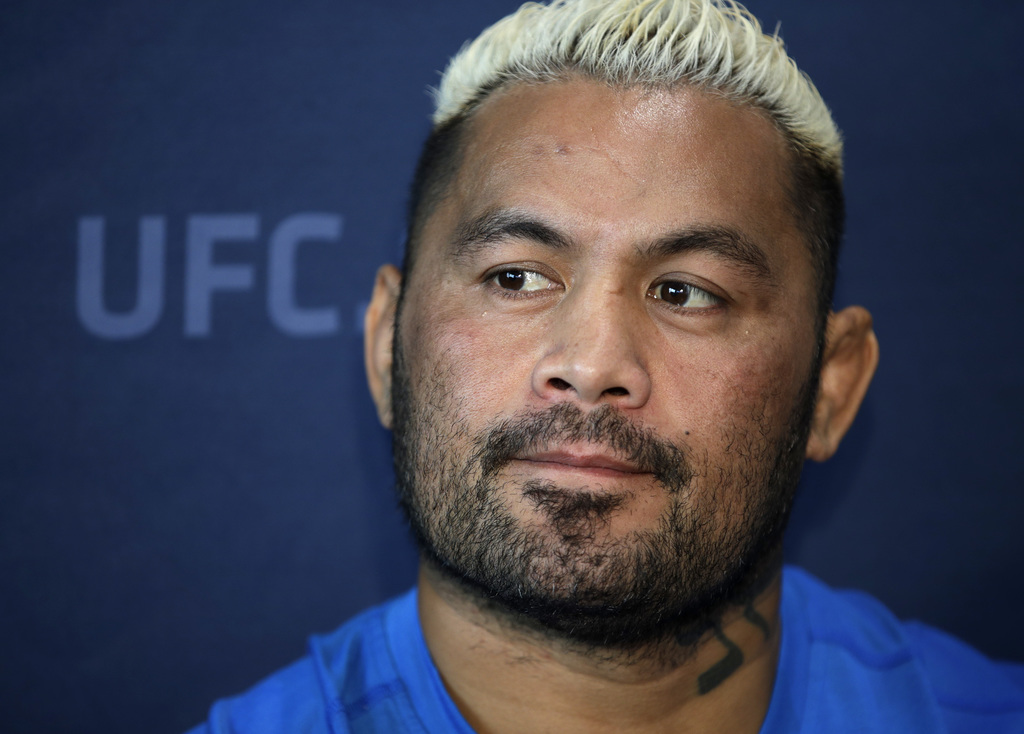 LAS VEGAS (AP) — Mark Hunt stepped on the scales and raised his arms above his generous belly Friday, weighing in at 265 pounds for his heavyweight bout at UFC 209.

He then climbed down and shook hands with UFC President Dana White, who he is currently suing for millions in U.S. District Court.

Hunt has a slightly awkward work environment this weekend when he takes on Alistair Overeem at UFC 209. He still doesn't regret his attempt to force the UFC to take more responsibility after three of his recent opponents failed drug tests.

"I didn't want to be in this position," Hunt told reporters this week in Las Vegas. "(But) what am I supposed to do, keep coming to work and fighting steroid cheaters? This is supposed to be the best fighters in the world. Not the best cheaters in the world, or the best guys that can hide it with doctors."

The 42-year-old New Zealand knockout artist has accused the UFC of fraud, racketeering and negligence in a wide-ranging suit filed earlier this year. The document personally names White and Brock Lesnar, his opponent at UFC 200 in July.

Lesnar failed drug tests before and after he beat Hunt in a brutal unanimous decision. The erstwhile pro wrestler was allowed to compete without the mandatory four-month drug testing period before his bout, and Hunt alleges the UFC knowingly allowed Lesnar to fight while on banned substances.

Hunt claims he is under contract for five more bouts with the UFC, and he must continue fighting for the promotion during their legal scuffle. He also acknowledges that the mixed martial arts promotion is still the best place for him to earn a living.

"I was forced to be here," Hunt said Thursday. "(The UFC) said, 'If you don't take this fight, it's against your contract.' Like I said, why should my family suffer and miss out on my hard work? They should deserve to have the better things in life, because I've gotten beaten up to get here. So why should they miss out? I haven't done nothing wrong here, so why should I be feeling like the outsider here? That other guy is the guy that cheated."

Frank Mir and Antonio "Bigfoot" Silva also failed post-fight drug tests after taking on Hunt recently. Although the "Super Samoan" is among the toughest veterans in the division, Hunt acknowledges concerns about the damage he might be doing to himself by fighting steroid-aided heavyweights.

"All I asked was an even playing field," Hunt said. "Put in a clause that if he gets caught doping, once he's been processed by USADA or whatever, his money should go all over to the guy that's worked hard to get there, that didn't cheat. Like I said before, it pays to cheat right now. It shouldn't be like that. ... It still pays to cheat at the moment."

The UFC filed a motion to dismiss Hunt's lawsuit earlier this week. Hunt's lawyers have said the fighter would be open to a monetary settlement before seeking millions of dollars in damages in court.

But until the legal wrangling progresses, Hunt intends to keep fighting — even against Overeem, who tested positive for elevated levels of testosterone in 2012. Hunt has been standoffish with Overeem during the promotion, saying that it "really irritates me in my skin that I have to share the octagon with guys that have cheated to get here."

Overeem has attempted to remain diplomatic in the face of Hunt's cheating rhetoric against him.

"I don't take it personal," Overeem told reporters. "He has his lawsuit and his thing against (the UFC), and I cannot blame him. I can understand his frustration. I would have gone about it a bit different. I'm more of a positive and a private person, but again, that's his decision, his choice, and he's going to have to live with it."

Hunt lost to Overeem by submission in Japan in 2008 before resurrecting his MMA career.

"I've never lost a rematch," Hunt said. "I'm looking forward to hurting him. It just angers me that I still have to compete with these guys that are known for using steroids."