Taipei (Taiwan News)—Following the aftermath of model Novia Lin's (林若亞) win in which a judge ruled the NT$128,000 salary cap was unconstitutional, Taiwan's finance ministry is drafting a new tax bill to raise deductions for salaries that will benefit 5.39 million workers.

Taiwan's Finance Minister Sheu Yu-Jer (許虞哲) announced the government is evaluating a proposal to raise to raise deductions for salaries or wages from NT$128,000 (US$4,156.92), and is considering whether to add capital gains from stocks in the draft income reform bill to be submitted to the Cabinet in May.

If the bill is passed, an estimated 5.39 million taxpayers, including investors and company employees, will see their taxes reduced by May 2018.

Sheu said the actual income tax deduction will depend on the country's financial situation, if the new bill substantially increases the country's overall tax revenue, the greater the income tax cut will be.

The amount deducted from taxpayers' income tax will be calculated in units of NT$1,000 (US$32.51). Every NT$1,000 reduced for personal income will cost the government NT$270 million in tax revenues, estimated Sheu.

The current tax rate deduction for individual income tax is 18 percent, so if a person's income is NT$100 they would only receive a NT$18 tax deduction.

Last December, the ministry proposed plans to raise the nation's enterprise income tax rates from 17 percent to at least 20 percent, while lowering personal income tax by 5 percent to 40 percent in the new tax bill. A court ruling in favor of Novia Lin's (林若亞) in a tax case in which she claimed the NT$128,000 salary cap was unconstitutional on Feb. 9, 2017, helped drive some of the recent tax changes.

In her appeal, Novia Lin objected to the National Taxation Bureau (NTB) listing the NT$300,000 she spent to purchase attire for work in 2005 as individual income tax, instead of enterprise income tax. She argued the money spent was expenditure and not income in her appeal.

Taiwanese model Lin Chi-ling (林志玲) was the first to file a similar administrative litigation case in 2016, but lost the appeal.

“All citizens of the Republic of China, irrespective of sex, religion, race, class, or party affiliation, shall be equal before the law.”

The new interpretation by the judge that NT$128,000 salary cap was unconstitutional and professional practices expenditures that exceeded the limit should be allowed to deduct spending from taxes in the same was as businesses.

Lawmakers in Taiwan will also discuss spending that can be listed as necessary professional practices expenditures to be deducted from income tax in May. 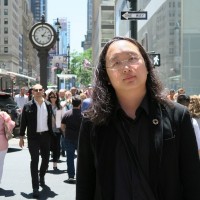