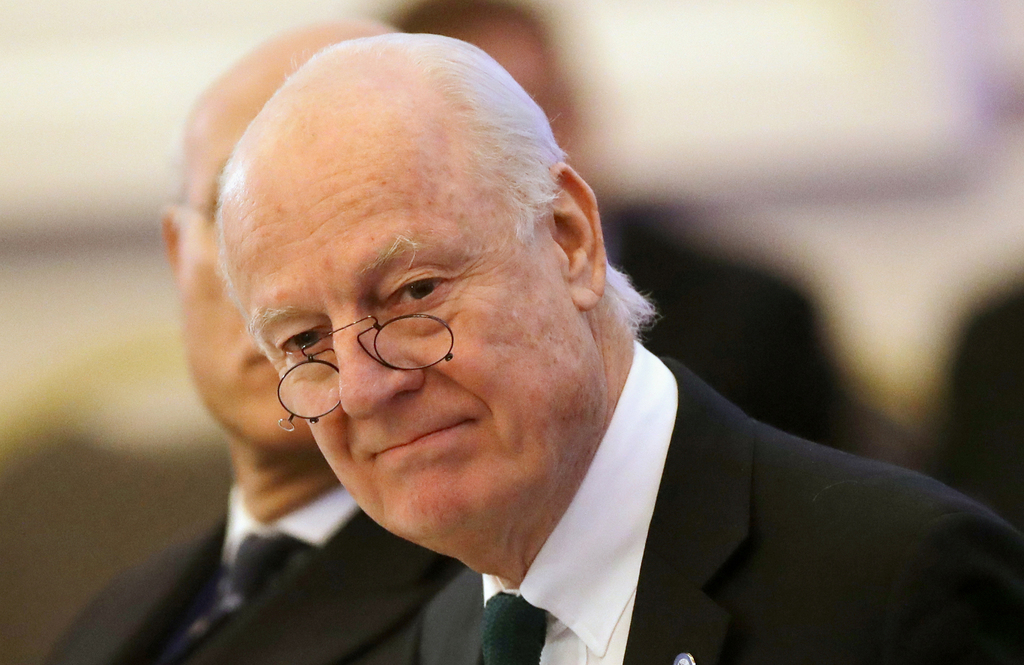 GENEVA (AP) — A fresh round of Syrian peace talks is set to begin in Geneva on Thursday. And while the U.N-sponsored talks may represent the best opportunity in years to make progress toward an end to the conflict, the burning question for many Syria observers is whether justice will be sacrificed in the name of peace.

To the dismay of those active in the fields of human rights law, accountability is not even a prominent topic on the agenda.

Syrian dissident and lawyer Anwar al-Bunni calls the diplomatic effort in Geneva "a waste of time" at the expense of the blood of the Syrian people. He is among those pushing for the creation of a Syrian court to prevent war criminals from escaping with impunity.

"Until now we have been unable to send the right message, whether to the victims or the perpetrators," al-Bunni, who lives in Berlin, told The Associated Press. "Solving the Syrian conflict requires the efforts of the entire international community, whether we are talking about holding criminals accountable, reconstruction, or the return of refugees."

But when it comes to justice in Syria, activists like al-Bunni can find themselves up against the political pragmatism and at times outright indifference of the international community. Expectations for this latest round of talks are relatively low.

The litany of horrors in Syria has caused destruction on such a scale that the United Nations has stopped counting the dead. Rights groups estimate nearly half a million people have died in a conflict punctuated by dozens of massacres, protracted siege and starvation campaigns, barrel bombs and chemical weapon attacks.

Thousands of prisoners have been tortured or starved to death in state-run detention facilities, according to multiple investigations. In a report this month, Amnesty International said the Syrian authorities hanged as many as 13,000 prisoners in one Damascus prison alone. The Syrian government rejects the findings.

In this fourth round of talks in Geneva between the Syrian government and the opposition, new political and military dynamics are at play but many of the same challenges remain.

Militarily, the Syrian government of President Bashar Assad — backed by Russia and Iran — now has the upper hand since retaking the strategic city of Aleppo in December. Turkey and Russia have set aside longstanding differences in a bid to keep a fragile cease-fire. Absent from the equation is the United States, which is still crafting a Syria policy under the new Trump administration.

The Syrian conflict has severely challenged the system of international justice that was painstakingly built after World War II. This is partly because Russia has blocked efforts to refer Syria to the International Criminal Court.

"It represents a real problem for our global system of justice when other situations that are much less serious than Syria go to court and Syria, with more than 450,000 dead does not go to an international court," said Stephen Rapp, the former U.S. ambassador-at-large for war crimes issues.

Rapp warns against the perils of seeking a peace without justice in Geneva, saying it could set the stage for score-settling and revenge killings in the future. It also reduces the prospects of Syrian refugees going back.

"The idea that people would go home to areas they left with no prospect of justice is unthinkable," Rapp, a non-resident fellow at The Hague Institute for Global Justice, told the AP.

International organizations and rights group blame Assad's government and its allies for the majority of deaths in the six years of Syrian conflict. The U.N. General Assembly in December voted to create an investigative body to gather evidence to prepare cases on war crimes and human rights violations.

But as long as Assad remains in power — an increasingly likely scenario — the prospects of government officials facing trial at the ICC or a specialized tribunal remain slim. Despite that bleak outlook, a constellation of legal experts and investigators are amassing evidence and building cases that could be viable in European courtrooms — sometimes with the assistance of informants inside Syria.

A judge in Spain's National Court is deciding over the next few days whether to accept the criminal complaint filed by a group of international lawyers against nine officials of the Syrian government for the 2013 arbitrary detention, disappearance, torture and execution of a truck driver.

The driver's name is being withheld at the request of the legal team due to concerns for the safety of remaining family members inside Syria. The driver's sister, Amal, learned of her brother's death by looking at the macabre trove of photographs smuggled out of Damascus by a sympathetic forensic photographer, codenamed Caesar.

Maite Parejo, one of the lawyers spearheading the case, says that criminal complaint narrowed down responsibility for the man's death to nine officials.

"We need to send signals that there is a fight for justice," Parejo said. "We hope that this case will help individuals in other countries who are in a similar situation to seek out help and start proceedings."

In Germany, which hosts the largest community of Syrian refugees in Europe, prosecutors are investigating several cases of alleged war crimes in Syria.

In theory, indictments could be issued in such cases regardless of the nationality of the victim or where the crime took place under the principle of universal jurisdiction that applies to serious offenses such as war crimes, crimes against humanity and genocide.

But in practice, German courts have typically only taken on cases where the defendants are in the country. A German court in 2015 convicted two Rwandan men over their involvement in genocide and war crimes committed in the conflict of eastern Congo, for example.

German prosecutors indicted five people over war crimes in 2016, most of them linked to opposition and extremist groups in Syria. None had ties to the Syrian government.

Advocacy groups including Amnesty International and Human Rights Watch, as well as the U.N. Human Rights Council's Commission of Inquiry on Syria, have extensively documented torture and killings in state-run detention facilities. The Commission for International Justice and Accountability has a legal brief that pins responsibility for this specific form of violence on Assad himself.

"The body of evidence is big enough that no prosecutor would deny that torture and even systematic torture happened in a number of prisons in Syria," says Wolfgang Kaleck, general secretary for the European Center for Constitutional and Human Rights. "It is a disaster for Syria that the states who are capable of really investigating these crimes are not doing enough."

Criminal prosecutions in Europe, many agree, are the only avenue for immediate accountability and a sense of justice for the Syrian community. Most of the war crimes cases that got to court focused on perpetrators in the armed opposition and individuals linked with extremist groups like the Islamic State group, reflecting partly the political climate of the host nations in a continent that has suffered stinging attacks.

But that could change.

CIJA Deputy Director Nerma Jelajic says her organization has received a growing number of requests for help from prosecutors at war crimes units across Europe investigating alleged war criminals that arrived amid the stream of Syrian refugees. "Last year we received about 400 different requests for assistance," she said. "We provide support to 12 countries in Western Europe and North America."

Syrian investigators have smuggled out about 800,000 documents from the war zone since 2011. Six legal briefs complied by CIJA target 60 major figures in the Syrian government for eventual prosecution.

Associated Press writers Aritz Parra in Madrid, Jamey Keaten in Geneva, and Frank Jordans and David Rising in Berlin contributed to this report.