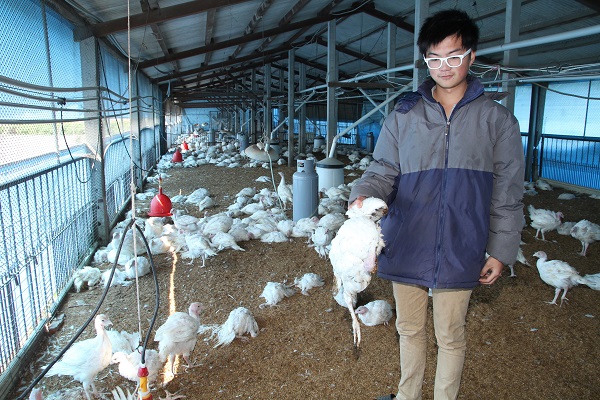 Taipei (Taiwan News)—The avian flu has spread down south to Tainan City in Taiwan, following confirmation of the latest casualties at a local turkey farm.

This is the second domestically confirmed case of the highly pathogenic avian influenza virus H5N6, and the first turkey farm in western Taiwan to be affected by the avian flu.

For six consecutive days, turkeys were dying in flocks at a farm in Liujia District, amounting to a total loss of 3,000 birds from the deadly H5N2 and H5N6 strain viruses.

At first the farmer was unaware that the birds were infected with the avian flu, thinking contamination of bird feed might have been the main cause of the deaths, and did not report to authorities immediately.

The turkey farmer faces a potential fine of NT$1 million ($32,000) for delaying reports to local Animal Health Inspection and Protection Office authorities. Moreover, authorities found the farm's registered bird type was different from the turkeys it was raising.

The H5N6 virus strain that killed turkeys less than six week old at the farm can be transmitted to humans, added Chen.

The health condition of the 16 employees at the turkey farm are being closely monitored by the Department of Health.

Taiwanese authorities are stepping up preventive measures, following reported cases of birds dying from the deadly virus in two counties.

Other preventive measures implemented by city authorities include taking samples from birds within 1 kilometer (km) of the infected turkey farm, as well as from duck farms within 3-5 km of the area over a three month period.

Farms within this area may only sell poultry in markets after their livestock pass avian flu virus tests.

The Executive Yuan has established an emergency avian flu response center on Sunday to curb the spread of the disease.

Hualien County located in eastern Taiwan was the first to notify authorities about cases of livestock infected with the latest H5N6 strain aviation flu, where more than 3,000 ducks were found infected with the H5N6 and H5N2 virus strains.

The COA banned Hualien County from shipping aquatic birds to other regions in Taiwan, while county authorities have expanded the area for monitoring avian flu from 3 km to 5 km.

Experts at an emergency meeting hosted by the COA Sunday believe migratory birds are spreading the avian flu in Taiwan, and recommended the council accelerate virus inspections.

Universities with veterinary departments, such as National Taiwan University, National Chung Hsing University, and National Chiayi University will be participating in virus tests, and report directly to the council about confirmed cases.

Birds that test positive with the avian flu virus will be immediately destroyed by the council.