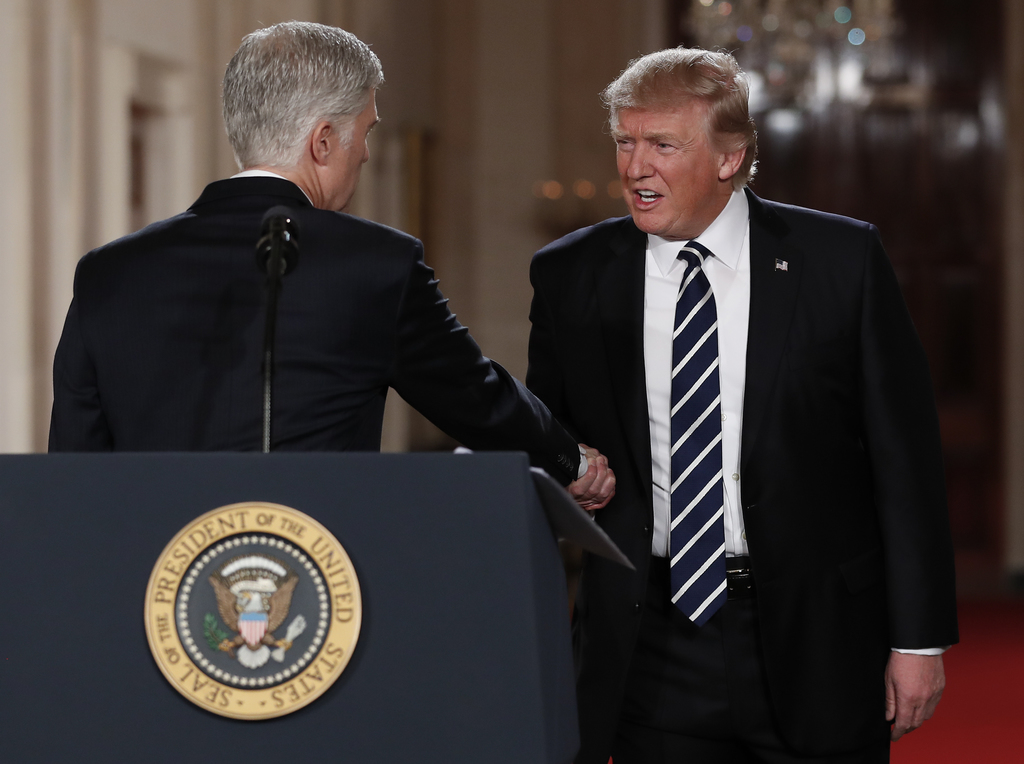 WASHINGTON (AP) — Senate Republicans stood united behind President Donald Trump's nomination of Judge Neil Gorsuch to the Supreme Court, bracing for a bitter, months-long fight with Democrats over a conservative judge similar in philosophy to the late Justice Antonin Scalia.

Majority Leader Mitch McConnell, R-Ky., immediately praised Gorsuch, a Denver-based judge on the 10th Circuit Court of Appeals, saying he "has an impressive background and a long record of faithfully applying the law and the Constitution." One after the other, Senate Republicans echoed the leader, describing Gorsuch as a well-qualified jurist.

If confirmed, the 49-year-old Gorsuch would be the youngest justice on the court and could be shaping decisions for decades.

Democrats signaled they will challenge the choice, insisting that Gorsuch, the Ivy League-educated son of a former Reagan Cabinet official, prove to them he is a mainstream nominee. Democrats are still furious with the way Republicans treated former President Barack Obama's nominee for the open seat last year, refusing to even grant a hearing or a vote to Judge Merrick Garland in Obama's final year in office.

Instead, the seat remained empty for 10 months and the court operated with eight justices as McConnell maintained that the next president should make the nomination.

"This is a stolen seat being filled by an illegitimate and extreme nominee, and I will do everything in my power to stand up against this assault on the court," said Sen. Jeff Merkley, D-Ore.

Merkley suggested Monday, before the nominee was announced, that he will hold up the nomination and force Republicans to find 60 votes for confirmation. Republicans hold a 52-48 majority.

Senate Democratic Leader Charles Schumer hasn't officially said whether he would attempt a filibuster, the procedural maneuver that would require 60 votes. But he said after the nomination was announced that the Senate "must insist" on 60 votes, meaning McConnell will need bipartisan support. And any senator can move to filibuster.

Democrats are under intense pressure from liberal groups and the party base to challenge every Trump nominee. As the nomination was announced, hundreds were protesting at Schumer's Brooklyn home, pressuring him to vote against Cabinet picks and block the Supreme Court nominee.

At least three Democrats came out in immediate opposition to Gorsuch. Massachusetts Sen. Elizabeth Warren, who said Gorsuch has sided with large companies over workers, and Ohio Sen. Sherrod Brown, who said Gorsuch's rulings haven't favored American workers or women's rights. Brown and Warren are up for re-election in 2018.

Schumer is in a tough position as he decides how to move forward. As liberal groups and Democratic voters angry about Trump's election victory press him to lead the loyal opposition, he must also be mindful of 23 Democrats and two independents who are up for re-election in 2018, including 10 in states won by Trump.

Some of those senators could face blowback from voters who see Democrats as obstructing Trump's pick. And some might decide to vote for Gorsuch.

Montana Sen. Jon Tester, a Democrat up for re-election next year in the Republican-leaning state, said he looks forward to "sitting down with Judge Gorsuch, looking him in the eye, asking him tough questions, and finding out if he shares our Montana values."

West Virginia Sen. Joe Manchin, also running in 2018, said he will examine Gorsuch's record and make "a determination of whether to provide my consent."

McConnell said he hoped all senators — Democrats included — show Gorsuch fair consideration and respect the outcome of the presidential election "with an up-or-down vote on his nomination, just like the Senate treated the four first-term nominees of Presidents Clinton and Obama."

The Republican leader made no mention of his treatment of Garland, whom Obama nominated in March after the sudden death of Scalia in February. The reference to an "up-or-down vote" was an acknowledgment of the challenge McConnell faces.

If McConnell fails to secure Democratic support to move the nomination, he'll come under intense pressure to blow up Senate rules and remove the filibuster, a move that would lower the threshold for approving Supreme Court nominees. Even Trump has suggested that McConnell scrap the rules.

Outside groups almost immediately imposed a litmus test for Democrats considering their vote on the nominee.

"We have a message for members of the Senate on Judge Gorsuch: opposing Roe v Wade is a disqualifier," said Cecile Richards, president of Planned Parenthood of America. "Nominees to the highest court in the land must make clear that they will protect our fundamental rights, including the right of a woman to control her body."

The Judicial Crisis Network has said it will spend $10 million to ensure Trump's pick is confirmed.