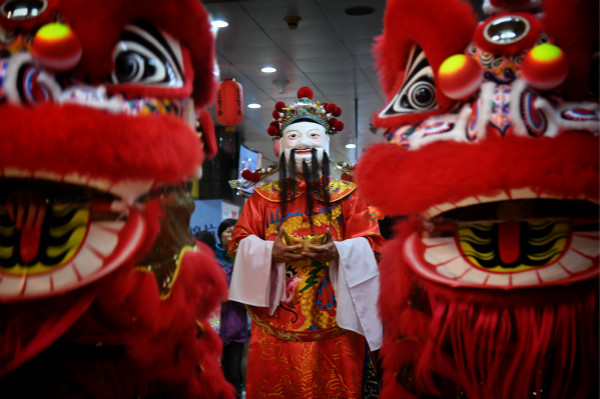 There are a mind bending amount of taboos during the Lunar New Year in Taiwan. The following are 10 rules to follow specifically on Lunar New Year's Day, to maximize your chances of good health, happiness and success.

1.Put up spring festival couplets on and around your door

Legend has it that there is the ferocious beast called "Nian" (年獸), which comes down from the mountains at this time of year and wreaks havoc. Fortunately, its kryptonite is the color red, so placing red-colored couplets around the door as well as the door gods will keep Nian away.

On the door itself, place the word for "blessing" (福) upside down (倒) to act as a homonym for the word to "arrive" (到), this symbolizes that fortune will arrive at your home.

In addition to red, the monster Nian also greatly fears fire and loud noise. This is why many people set off fireworks and generally make a lot of racket on Lunar New Year's Eve to scare the evil spirits away.

The color red symbolizes joy and happiness. It is considered extra good luck if you wear red underwear. Wearing new clothes symbolizes a fresh new start to the coming year.

4. Be sure to have plenty of leftovers

Cook enough food to last two days on New Year's Eve, so you have a generous surplus of food for everyone to eat on New Year's Day. This signifies that there will be an ample surplus of all things in life throughout the year.

5. Stay up until midnight on New Year's Eve

People usually stay up past midnight to usher in the New Year. Originally the practice was meant to watch out for the crafty "Sui" (祟) creature, or "guard against Sui" (守祟), but now this has become "preserving time" (守歲), to ensure good fortune throughout the year.

6. Feast with family and friends

Lunar New Year is a time for family reunion. The entire family enjoys a big dinner with all the traditional food for good fortune and luck. Lucky foods include fish, dumplings, sweet rice balls and rice cakes or niangao(年糕).

Put away all cleaning implements and trash bins to avoid sweeping away good fortune for the year.

8. Don't use words with negative meanings

Stay away from terms with negative meaning relating to death, sickness, pain, ghosts, poverty, and especially the number four. Instead, use euphemisms.

Breaking things on the New Year's day may result in losses or family rifts in the future. But if you do, the remedy is to say 歲歲平安 (Suìsuìpíng'ān). The first character sounds like the sound to "break" (碎), but in this case it is replaced with a homonym that means "age" (歲), and said twice means to live a long life and adds the words "peace" and "safety" (平安) at the end.

Avoid using knives, scissors, and needles. It is said that the use of sharp, bladed objects during this festival will cut one's good fortune and wealth.