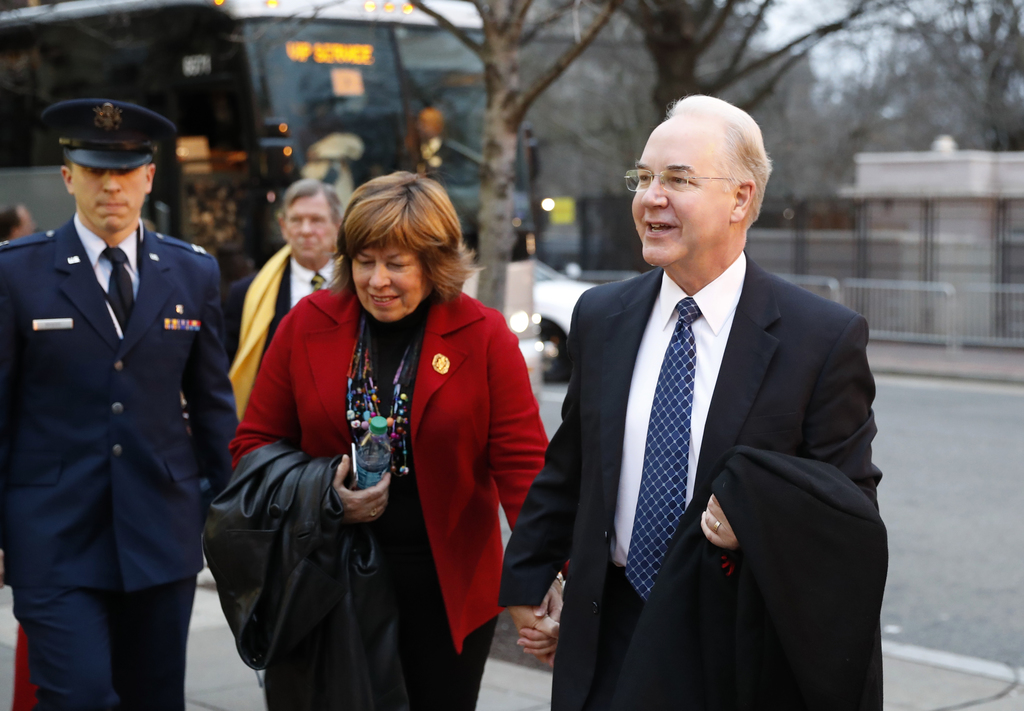 WASHINGTON (AP) — A second Senate committee is ready to interrogate President Donald Trump's pick for health secretary, a nominee who's backed by Republicans but under fire from Democrats for his support for tearing down President Barack Obama's health care overhaul and his past stock trades.

Trump's selection, Rep. Tom Price, R-Ga., 62, is a veteran conservative congressman and orthopedic surgeon from Atlanta's suburbs who has long favored voiding Obama's 2010 law and wrote his own proposed substitute for it. Chairman of the House Budget Committee until recently, he's also favored revamping Medicare and Medicaid, which Democrats vehemently resist and Trump as a presidential candidate said he opposed changing.

Tuesday's Senate Finance Committee hearing comes as GOP lawmakers intent on repealing Obama's law continue trying to figure out how they would replace it. That remains a top priority for Trump and congressional Republicans, and GOP lawmakers plan a retreat in Philadelphia later this week to discuss what to do.

Trump has been pressuring Republicans to move quickly on legislation scuttling Obama's law and replacing it.

The hearing also follows an executive order Trump issued Friday, his first day in office, that vaguely empowers federal officials to curb fiscal burdens Obama's overhaul imposes and give states more flexibility to interpret it. That could let agencies take steps like stopping fines of people who don't buy coverage or easing the law's requirement that insurers cover birth control, but there could be procedural and political pitfalls to exercising those powers.

In prepared remarks, committee Chairman Orrin Hatch, R-Utah, praised Price for having "the experience and qualifications" needed for the post. He accused Democrats of a "level of partisan rancor" he said he'd not seen before in trying to derail Price and other Trump nominees.

Top panel Democrat Ron Wyden of Oregon called Price "the architect of repeal and ruin" in prepared remarks. He said Price's plan would "tell vulnerable Americans that their health care will go only as far as their bank accounts will take them."

As head of the huge Health and Human Services Department, Price would have enormous power to decide how Obama's law is interpreted and enforced. For example, he could weaken the statute's requirements that people buy insurance and larger employers provide it to workers by granting broader exemptions, or reduce the extent of coverage insurers must provide for 10 types of mandated health services.

Trump has offered few details on how he'd reshape the law.

He's said he wants to provide "insurance for everybody" and force pharmaceutical companies to negotiate prices with the federal government, proposals that appeal to many Democrats. He also wants to rely more on health savings accounts for people's medical expenses and let states decide how to spend federal Medicaid dollars for low-income people, GOP ideas that Democrats oppose.

Obama's law has provided coverage to 20 million people by creating online marketplaces for those without employer-provided coverage and subsidizing many of them, and expanding Medicaid to more lower-income people.

The nonpartisan Congressional Budget Office estimated last week that repeal without a replacement would cost 18 million people their insurance in the first year and spike premiums for individual coverage — not provided by companies — by up to 25 percent.

The Wall Street Journal reported last month that over the past four years, Price traded more than $300,000 worth of shares in around 40 health-related companies, even as he pushed legislation that could affect the firms' values.

Price has signed a government ethics agreement to sell his stock, but Democrats have suggested he's gotten special deals and inside information for some purchases. Price has said he's done nothing wrong.

A bipartisan Finance panel staff memo obtained by The Associated Press said that in disclosure forms he's filed, Price undervalued around 400,000 shares of stock he purchased last August in an Australian drug company.

The memo said Price reported the shares were worth $50,000 to $100,000, based on the purchase price then. Those shares were worth up to $250,000 when he filed his forms to the Finance committee, the report said. Price said his figures were a "good faith valuation" but agreed to recalculate the value, the memo said.

The shares are in Innate Immunotherapeutics Ltd., which Democrats have accused Price of purchasing based on insider information. Price has denied that.

The Senate Health committee held an initial hearing on Price last Tuesday, but only the Finance Committee has the jurisdiction to vote on his nomination. The full Senate would then vote on confirmation.