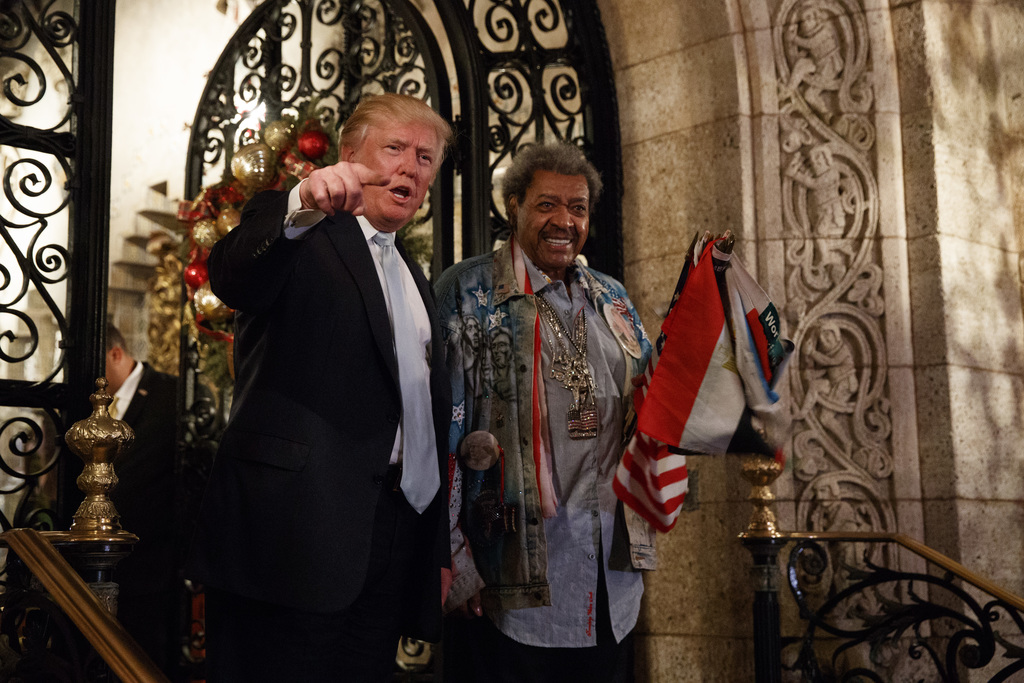 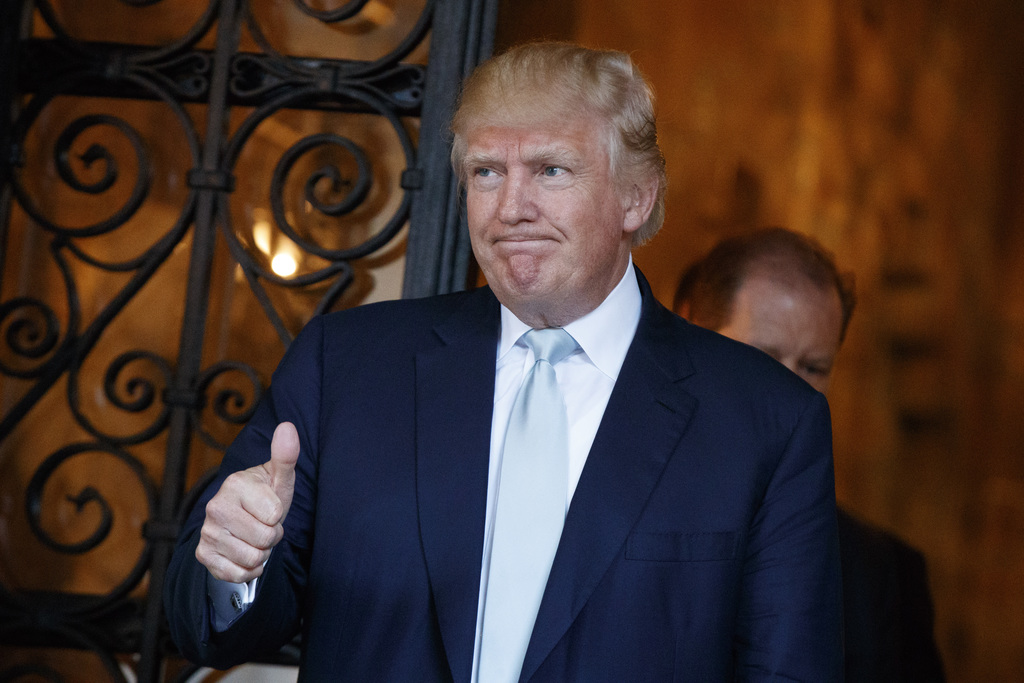 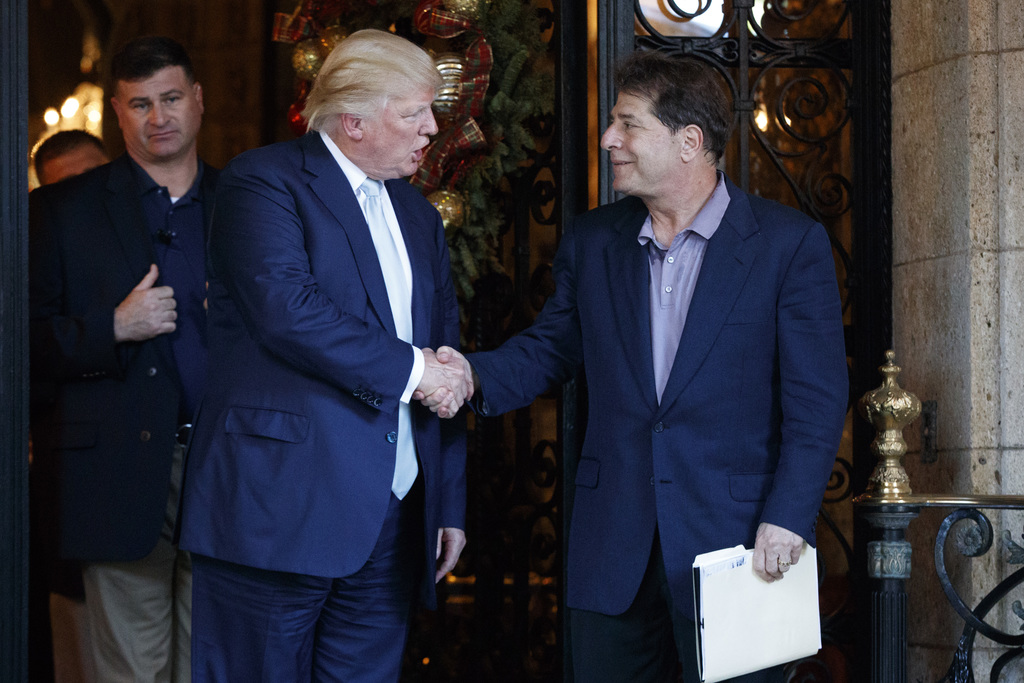 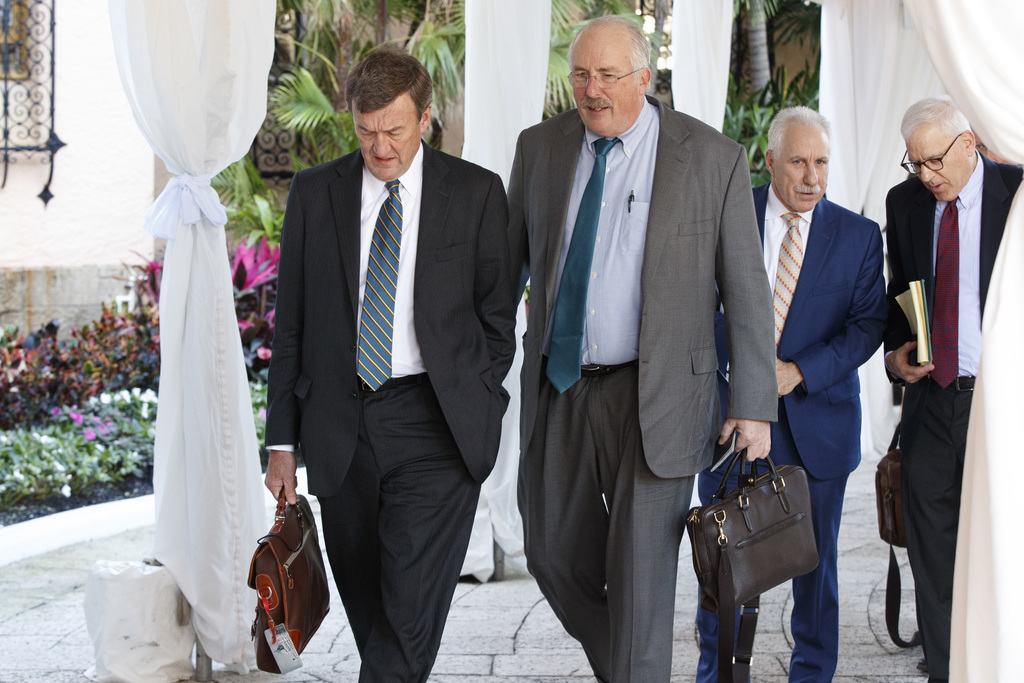 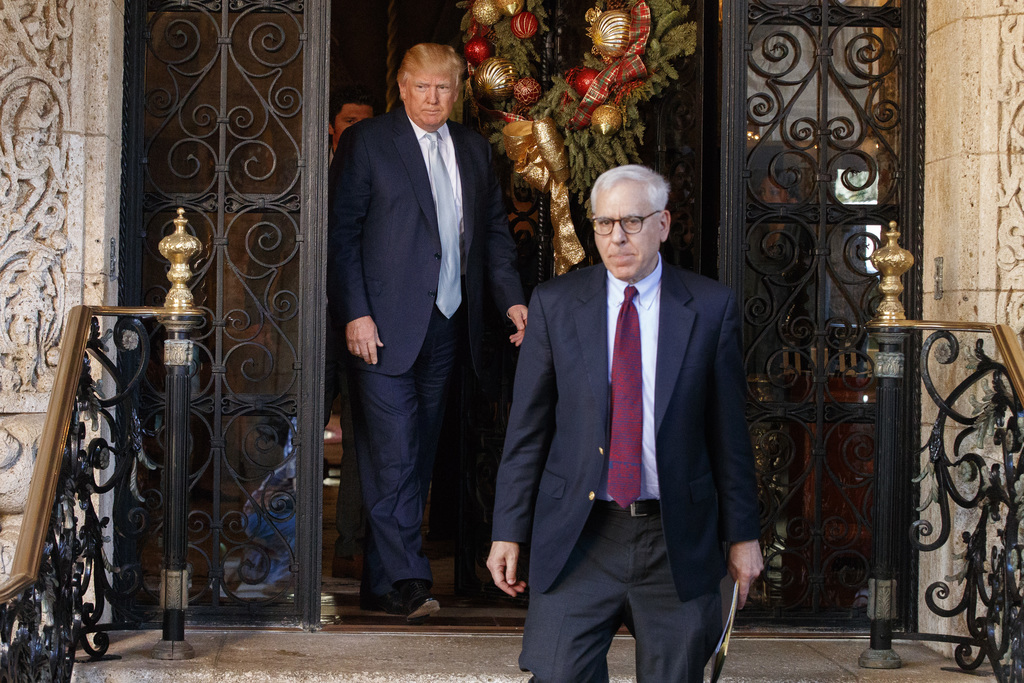 Donald Trump is answering calls for the U.S. to respond to Russian hacking by saying computers have "complicated lives very greatly."

Trump is referring to calls by some on Capitol Hill to sanction Russia over accusations it tampered with the U.S. election.

Speaking to journalists at his Palm Beach, Florida, estate, Trump is not addressing the issue of sanctions, but says, "We don't have the kind of security we need."

He adds, "Nobody knows what's going on."

Trump says he has not spoken with senators calling for sanctions but believes "we have to get on with our lives."

Donald Trump has held his longest question-and-answer session with reporters since Election Day — and he did it with legendary boxing entrepreneur Don King.

King is regaling reporters with his own catchphrase, "Only in America," and Trump's campaign slogan, "Make America Great again."

Trump and King spoke to reporters Wednesday night at the entrance to Trump's Mar-a-Lago resort.

He is calling for "peace in the Middle East" and says he wants "everyone to come together as one unit and make things happen."

King is also wearing a large pin featuring a picture of Trump.

President-elect Donald Trump is telling visitors to his Florida club that he plans to write his inaugural address himself and is drawing inspiration from Presidents Ronald Reagan and John F. Kennedy.

That's according to a person who has spoken with Trump at Mar-a-Lago, the South Florida club where he is spending the holidays.

Trump has told visitors that Reagan had "incredible style." He has also noted the upcoming 100th anniversary of Kennedy's birth.

The president-elect is also spending some his time in Florida focusing on veterans' health issues and has told visitors he plans to make that a priority in his administration.

The person who spoke with Trump insisted on anonymity in order to disclose private conversations.

President Barack Obama is committing to continuing talks with President-elect Donald Trump, even as Trump accuses him of throwing up "roadblocks" to a smooth transition of power.

Obama called Trump on Wednesday morning from Hawaii, where Obama is on vacation with his family. The White House says the call was "positive" and focused on "continuing a smooth and effective transition."

White House spokesman Eric Schultz says Obama's other calls with Trump since the election have also been positive. He says Obama and Trump agreed that their teams will keep working together until Inauguration Day on Jan. 20.

Earlier Wednesday, Trump said on Twitter that the transition was not going smoothly and blamed Obama.

But he later told reporters that he and Obama "had a very nice conversation."

Donald Trump is touting plans by a Japanese mogul to bring 8,000 jobs to the United States.

Tech billionaire Masayoshi Son promised to create 50,000 jobs after meeting with the president-elect in December.

Son is the founder and chief executive of SoftBank, one of Japan's largest technology outfits. He owns the U.S. mobile carrier Sprint, which Trump said Wednesday would be moving 5,000 jobs "back" to the United States. Son also controls OneWeb, which Trump said would hire 3,000 workers.

It was unclear whether the president-elect was referencing Son's earlier commitment to invest $50 billion in the United States and create 50,000 jobs.

Trump attributed the addition of 8,000 jobs to "what's happening and the spirit and the hope."

__ This item has been corrected to identify the second company as OneWeb, not OneWest.

Donald Trump now says the White House transition is going "smoothly" after complaining earlier about some of President Barack Obama's "statements and roadblocks."

Earlier Wednesday, Trump wrote on Twitter: "Doing my best to disregard the many inflammatory President O statements and roadblocks. Thought it was going to be a smooth transition — NOT!"

In brief remarks to journalists at his Mar-a-Lago resort in Florida Wednesday, Trump was asked about the tweet and how he thought the transition was going.

He said: "I think very, very smoothly. It's very good. You don't think so?"

The president and president-elect have exchanged some criticism in recent days after Obama hypothetically said he would've beaten Trump if they had been opponents in the general election. To that, Trump responded, "No way!"

An inauguration event that drew scrutiny for appearing to put access to President-elect Donald Trump and two of his children up for bid has officially been scrapped.

The "Opening Day" event, which had originally been scheduled for Jan. 21 to raise money for conservation charities, will now be held in the spring. That's according to the event's co-chairs.

Trump's sons Eric and Donald Jr. had been named as directors of a nonprofit that had initially advertised offering $1 million donors the chance to rub elbows with the new president at a "Camouflage & Cufflinks" ball the day after his swearing-in. Also up for bid: a multi-day hunting or fishing trip with his sons.

Trump spokeswoman Hope Hicks later said the family had not been involved.

President-elect Donald Trump is resuming his busy schedule of meetings following a brief lull for the holidays.

Trump first met with David Rubenstein, head of investment firm Carlyle Group, and also is scheduled to meet Wednesday with a number of medical professionals.

Trump also is meeting with Marvel Entertainment chairman Ike Perlmutter at his Mar-a-Lago resort in Florida.

The president-elect wrote on Twitter on Wednesday that Israel "used to have a great friend in the U.S., but ... not anymore."

Trump said the Iran nuclear deal under the Obama administration was "the beginning of the end" and then came the vote in the United Nations condemning the building of Israeli settlements in the West Bank and east Jerusalem.

He told Israel to "stay strong" because he will be in office soon.

Trump's comments come amid growing tensions between the U.S. and Israel following the UN vote.

Secretary of State John Kerry is scheduled to address the issue in a speech later Wednesday.

President Barack Obama seems to be getting under his successor's skin.

President-elect Donald Trump says on Twitter that he's doing his "best" to "disregard the many inflammatory President O statements and roadblocks."

He says he "Thought it was going to be a smooth transition - NOT!"

Obama told his former White House adviser David Axelrod in a podcast released Monday that he believes he could have won had he run for a third term. Trump said he disagreed.

Trump has his transition team have until now been largely complimentary of the way President Obama and his White House team have handled the transition of power from one administration to the next.