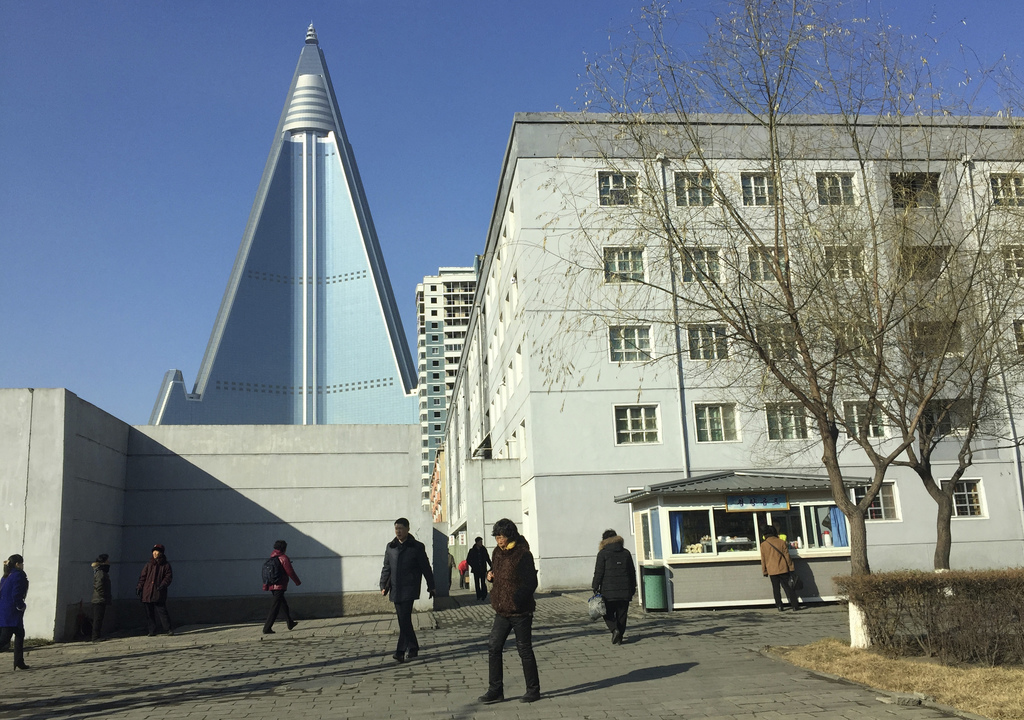 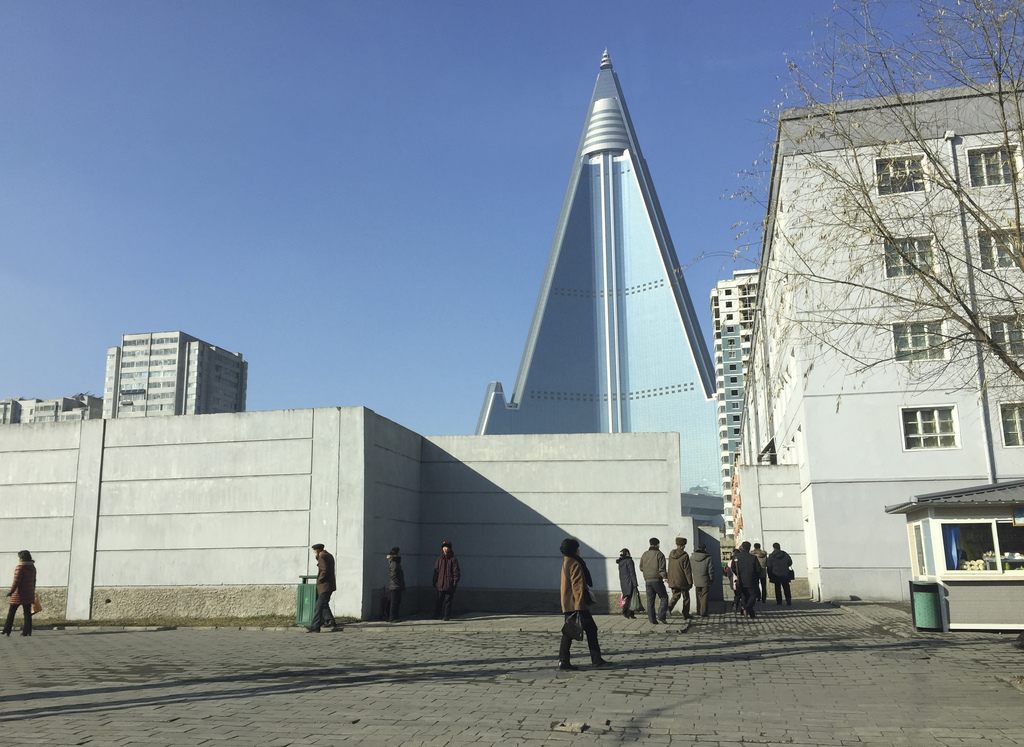 PYONGYANG, North Korea (AP) — Pyongyang's pyramid-shaped Ryugyong Hotel, which poetically enough was built with some help from Egyptians, is one of the world's strangest landmarks and most conspicuous construction-project fails. Intended to be the world's tallest hotel, it has yet to host a guest, even though it's nearly as old as North Korean leader Kim Jong Un.

The perennial mystery: Will it ever?

Nearly 30 years after ground was broken, the tower looms eerily dark in the Pyongyang night, a single light at the top blinking a silent warning to aircraft. By day, residents walk quickly to and from the nearby subway station with nary a glance upward at its 105-story presence.

Earlier this month, however, a video showing lights toward the top of the tower, combined with a visit to Pyongyang by the hotel's Egyptian investors, sparked speculation among foreign Pyongyang watchers that construction was resuming and the hotel might even open in 2017. Not to be outdone, some British tabloids were soon reporting that the hotel had already opened its doors for guests.

Fact check: It hasn't. And those lights on the upper floors have gone dark again.

But the idea that Kim might be interested in finally finishing the biggest project started in the name of his grandfather, "eternal president" Kim Il Sung, isn't particularly outlandish. Since assuming power five years ago, Kim has ordered the construction of a number of skyscrapers that have significantly changed the Pyongyang skyline.

And while the possibility something is afoot at the Ryugyong can't be ruled out, for the time being Kim appears to be putting his money elsewhere. An apartment building is now nearing completion in the newest project, on Ryomyong Street. It's about 70 stories and the North's tallest building outside of the Ryugyong. Earlier this year, a cluster of new, futuristic-looking high-rises was completed on Scientists' Street, including one at 50 stories.

Construction of the Ryugyong tower began in 1987 and was supposed to take about two years.

For various reasons, it drew on until 1992, which was a very bad year — and the beginning of a very bad decade — for North Korea. The Soviet Union collapsed in late 1991, taking with it most of the North's communist bloc benefactors and setting the stage for a major economic crisis heightened by a series of droughts and a famine that brought North Korea to the verge of collapse.

The country survived what it now euphemistically calls the "arduous march," but construction of the Ryugyong didn't start up again until 2008.

With a $30 million injection of funds from Egypt's Orascom Telecommunications Holdings — which was in the country to pursue a joint venture to establish a North Korean cellphone network — the building's exterior was completed in 2011.

In a prospectus from June 2012, Orascom said it expected the partial completion of the Ryugyong's 360,000 square meters of floor space, which would include apartments and offices along with hotel facilities, by the end of the year. It added that Orascom was planning to kick in another $15 million loan "to be repaid when the tower becomes operational."

Simon Cockerell, general manager of Koryo Tours, which operates in North Korea, is one of the few foreigners to have seen the hotel from the inside.

"When I visited the site first, we had a meeting with the project director. He showed us this video of what it was supposed to look like. Wouldn't give us a copy though, or let us film it," he said of his visit in 2012. "It showed the hotel as they imagine it in the future, but he did say some things from the original plans had changed — no more external elevators, no five revolving restaurants, now just three — and he said they didn't have the funding to complete it. Simply a money issue."

Cockerell said he has not heard of any significant activity at the Ryugyong since then.

"I have only heard snippets — various claims in the media, really, and some guesswork from some of the Koreans I know," he said. "There is clearly not a lot of vehicles going onto the site, meaning that major work cannot have been going on. Perhaps some smaller work, but nothing on the scale that would have been needed to get this done properly."

Others who deal regularly with North Korean tourism officials were also cautious.

"As far as we are aware, the situation officially remains, 'They are working on it,'" said Troy Collings, managing director of another North Korea tourism agency, Young Pioneer Tours. "We've not heard any mention of it from our partners and I dare say if the hotel was preparing to open they'd be very excited to inform us and get us trying to attract guests."

In the meantime, the hotel continues to be the world's largest unoccupied building.