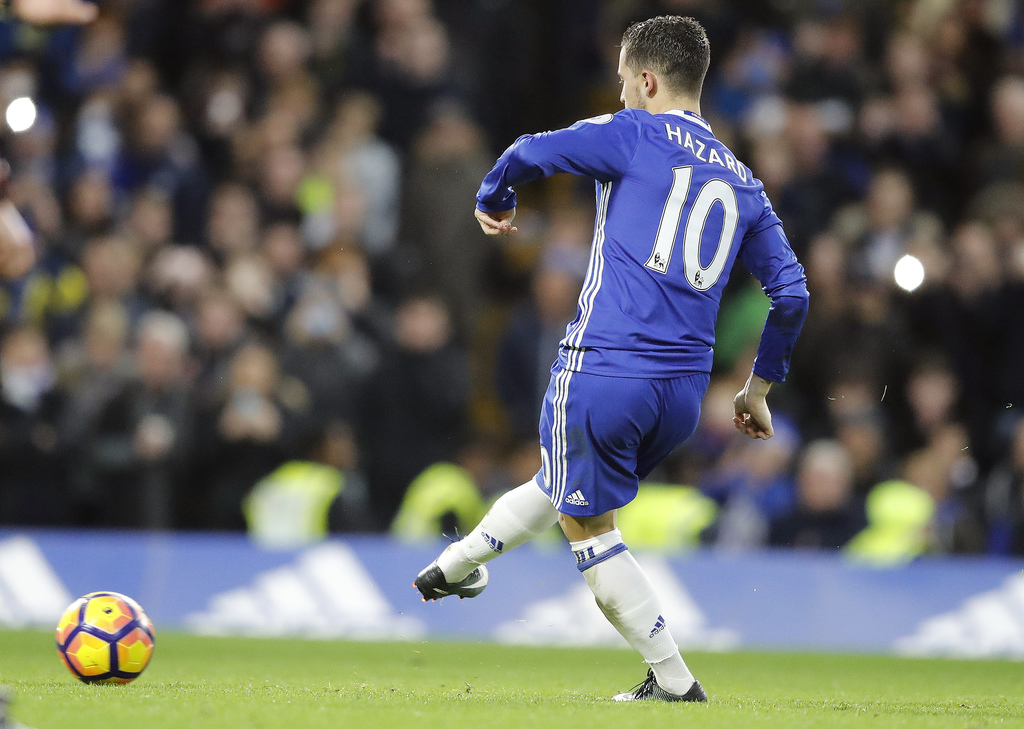 BRUSSELS (AP) — Belgium's soccer stars are household names like Eden Hazard, Kevin De Bruyne, Dries Mertens — and the list could go on. Among the half-dozen top teams in the country's league are Zulte Waregem, KV Ostend and KV Mechelen.

The contrast in fame and fortune could hardly be bigger between players and league, and the first half of this season did little to change that.

The Jupiler League is providing entertainment to few outside the Belgian borders. Club Brugge is leading the league heading into the new year with 43 points from 21 games, two points more than Anderlecht while Zulte Waregem is another point further back.

Brugge is the defending champion but, for one yardstick on the value of the league, use this one: Despite dominating in Belgium during 2016, Brugge lost every game in its Champions League group.

With such a dearth of talent, Belgium has found one way to make the league interesting through next spring — the playoffs. Normal league play is effectively over in March — and the top six teams then play their own little league. To make matters more interesting, all points from the regular season are cut in half.

The debate is endless whether this setup crowns the best team of a season. But one thing is for sure, there is usually tension guaranteed until the last day. So up to March, teams are specifically centered on getting into the top six to be assured of five more lucrative home games. If usually one "oddball" makes it in, this season could be different with KV Ostend and KV Mechelen in positions 4 and 5 at the moment.

At the same time, traditional powerhouses AA Ghent, Standard Liege and Racing Genk are out of the top six, and could be looking at a miserable springtime.

If there is one standout who has thrilled the league, it must be new arrival Lukasz Teodorczyk, a Pole already known by smitten Anderlecht fans as "Teo." Too bad he is still on loan from Dynamo Kiev. Teodorczyk is a simple goal-getter — few thrills but lethal in the penalty area. And with 24 goals overall since his arrival in August, including 16 in the league, he has made Anderlecht a title challenger despite often lackluster play under new coach Rene Weiler. Teodorczyk leads the Golden Bull topscoring list by four.

Over the next month though, he might miss the services of playmaker Sofiane Hanni, who has been called up by Algeria on African Cup duty.

Defending champion FC Brugge has been counting ever more on Ruud Vormer, the 28-year-old Dutch midfielder who is at his best in his third season at the club. Also in midfield, Timmy Simons could win yet another title at age 40. Only last month, he already became the oldest player to compete in a national team shirt.

In a nation where players like Eden Hazard, Kevin De Bruyne and Thibaut Courtois were already established stars as teenagers, the 2016 crop looks meager.

In a sense, it's curious that Youri Tielemans can still be seen as a young talent, since the 19-year-old has been playing with Anderlecht for three years already. Tried, tested and approved in midfield, Tielemans is looking toward making an impact on the Belgian national team in the new year.

Even though KV Mechelen has won the league title four times in its history and even clinched the European Cup Winners Cup in 1988, it had fallen on hard times in recent years. And few would have predicted an improvement when it lost top player Sofiane Hanni to Anderlecht during the summer transfer window. Making matters worse was the departure of coach Aleksandar Jankovic to Standard Liege in September.

But Mechelen has surged under new coach Yannick Ferrera after a lackluster start and is now fifth with a good shot at making the playoffs.

If one team has much left to prove this season, it is AA Ghent, the main challenger to the traditional top three of Anderlecht, FC Brugge and Standard Liege over the last few years. It won its first title two years ago and backed it up last year with a good run through the group stage into the second round of the Champions League.

This season, things are going from bad to worse. It lost playmaker Sven Kums in the offseason, but even that should not explain its dismal run which has left it seventh and on the wrong side of the playoff threshold.