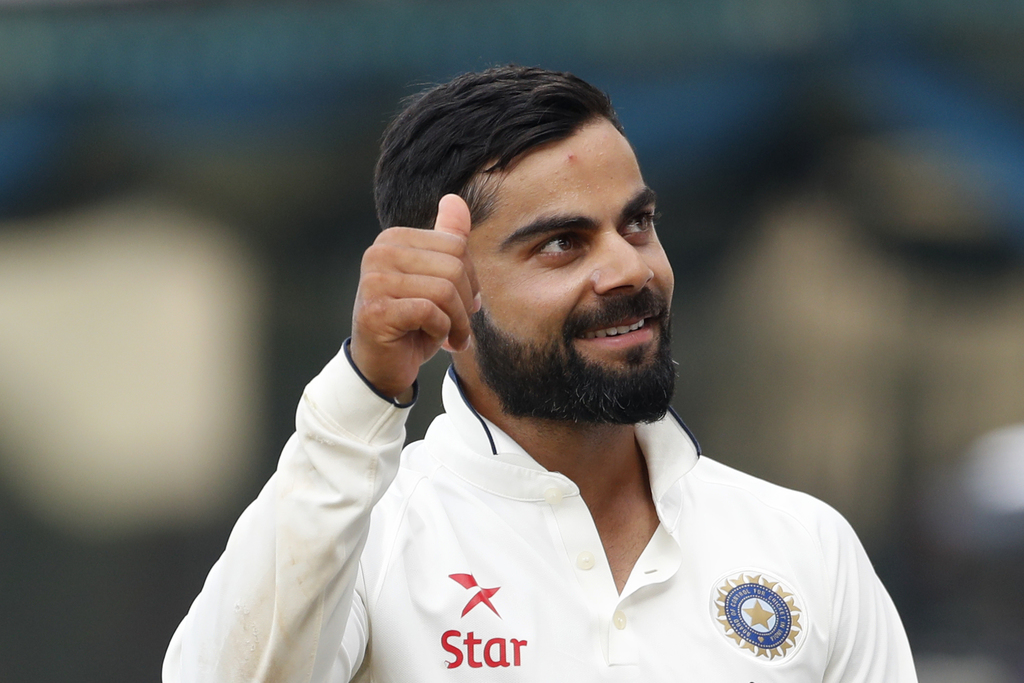 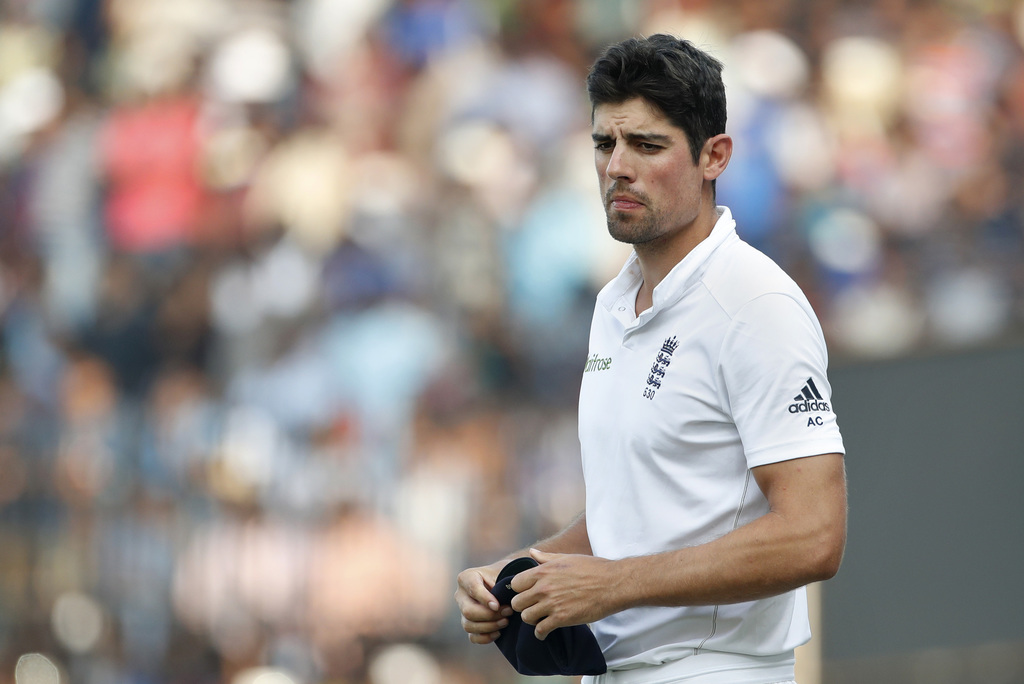 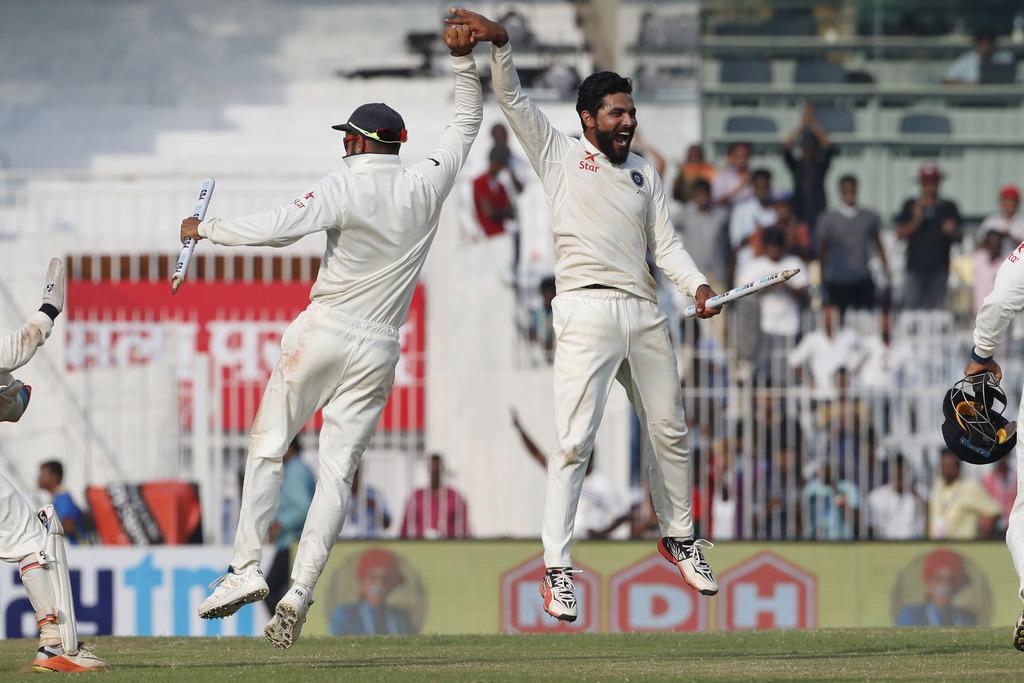 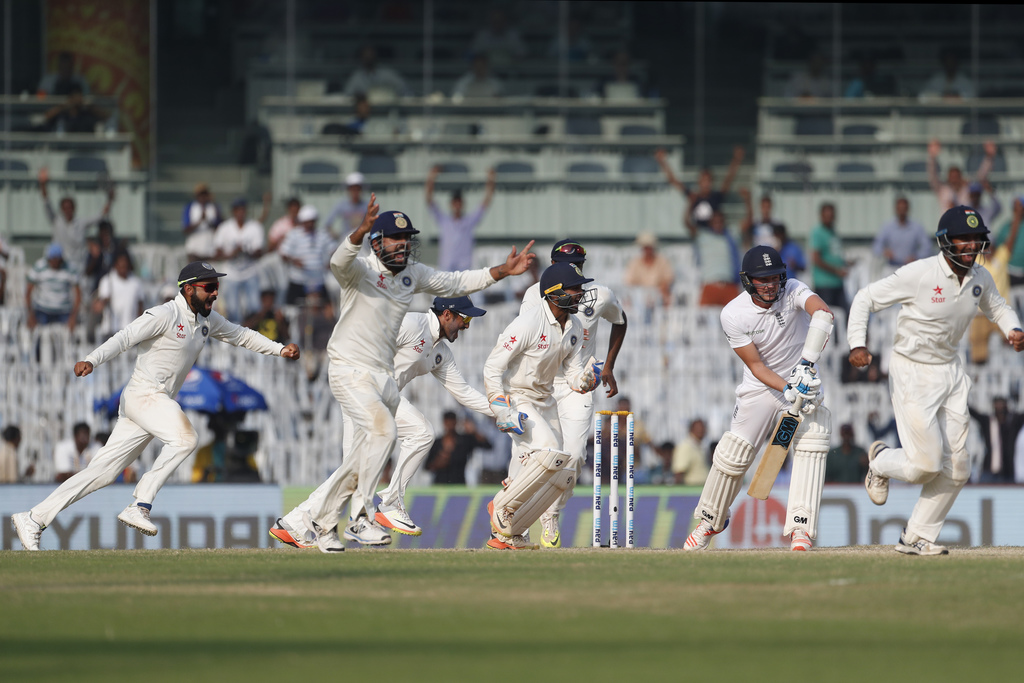 CHENNAI, India (AP) — England's losing tour of India ended in further failure on Tuesday when the tourists collapsed to an innings and 75-run loss in the fifth test in Chennai.

Well placed at 167-4 going into the final session and playing for an honorable draw, England lost six wickets for 40 runs to lose the the five-match series 4-0.

India dominated throughout the series, with effective spin bowling while its batsmen exerted complete domination over England's spinners.

On Tuesday, Ravindra Jadeja took 7-48, his sixth five-wicket haul and his career-best in test cricket, as the visitors collapsed.

The first test in Rajkot ended in a draw and India won the second test in Visakhapatnam by 246 runs, as well as the third test in Mohali by eight wickets.

They won the series with an innings and 36-run win in Mumbai.

Virat Kohli was declared man of the series for his 655 runs in five tests. "It's been a complete performance from the time we were put under pressure in Rajkot, to come back and put them under pressure in the next game. We lost tosses in four of the five tests and came from behind to win three of those matches. The lower-order contributions stand out for us and it has been a very satisfying series," he said.

Karun Nair was given the man of the match for his maiden triple hundred. "I think it will take a couple of days to sink in. It's an amazing feeling when you contribute to winning a match, so hats off to the team," he said.

Starting from overnight 12-0, England openers Alastair Cook (49) and Keaton Jennings (54) put on a century stand for the first wicket.

Cook was caught at leg slip off Jadeja soon after lunch while Jennings completed his maiden test half-century off 117 balls. He too fell shortly afterwards, lobbing a simple return catch to Jadeja in the 44th over.

Jadeja then trapped Joe Root (6) lbw in the 50th over via DRS review.

The all-rounder was all over the visitors, as he played a part in dismissing Jonny Bairstow (1) as well. Jadeja ran back from midwicket to complete the catch, as the batsman miscued a chip in the air off Ishant Sharma (1-17).

Jadeja had taken 3-38 before tea, and he continued his fine form thereafter, picking 4 wickets for 10 runs. His previous best was 6-138 against South Africa in Durban in 2013.

This was Jadeja's first ten-wicket haul in test cricket, as he picked 3-106 in the first innings, returning a total 10-154.

"With his accurate bowling, Jadeja brings balance to the side. He can bowl in any conditions. He doesn't have too many variations, but he made the batsmen think with his accuracy about how long they can defend," said Kohli, about Jadeja's incisive spell.

Moeen Ali (44) played an unnecessary heave to throw his good work, and was caught at mid-on by a leaping Ravichandran Ashwin.

Ali had been given a life in the 70th over, when he was dropped at short leg off Jadeja, but didn't make it count.

Then, Ben Stokes (23) was caught at midwicket off Jadeja again, the left-arm spinner picking his first five-wicket haul since 5-73 against New Zealand in Kanpur this past September.

Stokes and Ali had added 63 runs for the fifth wicket, and thereafter it all fell apart.

Amit Mishra (1-30) bowled Liam Dawson (0) with a googly, and then Umesh Yadav (1-36) had Adil Rashid (2) caught at point by Jadeja, as he was omnipresent today in England's misery.

Jos Buttler (6 not out) and Stuart Broad (1) resisted for a bit, but Jadeja returned to pick the last two wickets.

Broad was caught at short leg, and then Jake Ball (0) was snapped up by Karun Nair to bring down the curtains on the series.

England went from 103-0 to 207 all out, losing 10 wickets for 104 runs. "It wasn't great viewing but it happens in this part of the world on the fifth day of a test. The momentum is very hard to stop when wickets fall in clusters," said Cook, after the day's play.

"It has been a tough tour and it can get lonely when you lose games of cricket. We have to give India credit. Even when we put 470 runs on the board, they made big runs under pressure. We knew we would be under pressure today if we lost a couple quick wickets, and wanted to stop that momentum. But we couldn't do that with our skills. We just haven't been good enough to put India under pressure," he added.

Cook is under pressure to hold on to his job as England test skipper, after drawing 2-2 with Pakistan at home in the summer, drawing 1-1 in Bangladesh before the Indian tour, and after suffering a 4-0 rout in the five-match series here.

"I have said earlier that I have to go away and do some thinking. This is not the right time to make decisions as big as that. I will come back in January, then plan with Andrew Strauss, and see what's right going ahead for English cricket," Cook signed off.