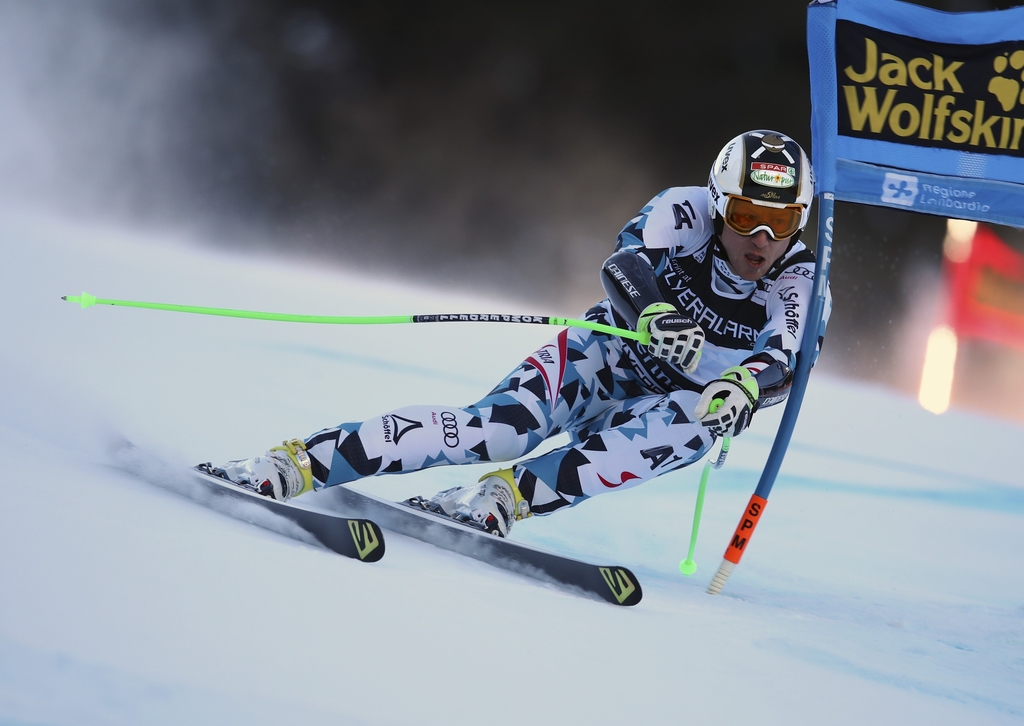 SANTA CATERINA VALFURVA, Italy (AP) — Not since Hermann Maier has a skier dominated in super-G the way Kjetil Jansrud is doing this season.

The Norwegian on Tuesday became only the second man to win the first three super-G races of the season after Austrian great Hermann Maier, who accomplished the feat twice — in 1997-98 and 1999-2000.

"Looking at his career and mine, I'm not even comparable to him," Jansrud said.

It was the 18th win of Jansrud's World Cup career, matching him with Lasse Kjus for third place among Norwegian men — behind Aksel Lund Svindal (32) and Kjetil Andre Aamodt (21).

While Svindal and Aamodt may still be in range for Jansrud, catching Maier, who is second on the all-time list with 54 wins, is unlikely.

"Just to be mentioned together with his name is quite unbelievable," Jansrud said.

Jansrud, the Olympic champion, finished 0.60 seconds ahead of Hannes Reichelt of Austria and 0.65 in front of Dominik Paris of Italy.

"Standing here with three wins is quite extraordinary," Jansrud said. "But I've got to stay humble because I know there are a lot of great skiers around. For sure I'll try to continue winning but I've got to take one day at a time."

Svindal is sitting out this week's races to rest a sore knee.

It's been an up-and-down year for the 36-year-old Reichelt, the reigning world champion in super-G.

In January, Reichelt sustained bruises and a mild concussion in a crash at the classic race in Kitzbuehel. Then shortly after getting married over the summer, he had surgery to repair a herniated disk in his back in September.

"I'm really pleased to be back on the podium so soon," Reichelt said. "My goal was to be back in top shape for January so this gives me a lot of confidence."

It was the second podium result for Paris in super-G this season.

"I love downhill but lately I've been doing better in super-G," the Italian said.

As usual in Santa Caterina, visibility was difficult with the Deborah Compagnoni course almost entirely in the shade.

The top American was Tommy Biesemeyer in a career-best eighth, which was quite an achievement with the No. 45 bib. Also, two-time Olympic super-G medalist Andrew Weibrecht finished 12th.

Biesemeyer was also quick in downhill training a day earlier. The Keene, New York, skier is starting to see the results of focusing exclusively on the speed events of downhill and super-G this season, having previously also raced giant slalom.

"This kind of hill, this kind of snow and course set plays into my favor," Biesemeyer said. "I look at this kind of course and see confidence, whereas some other courses I don't and that is a reflection of my results. It's a huge step. And I think there's more speed out there and that's very motivating."

Not a speed specialist, overall World Cup leader Marcel Hirscher finished 47th and failed to gain any points. Still, the Austrian holds a comfortable lead of 151 points over Jansrud in the overall standings.

In the super-G standings, Jansrud has a perfect 300 points and is 148 ahead of Paris.

This was the first time that a men's super-G was contested on the Compagnoni course. The race was originally scheduled for Lake Louise, Alberta, earlier this season but was moved due to a lack of snow in the Canadian resort.