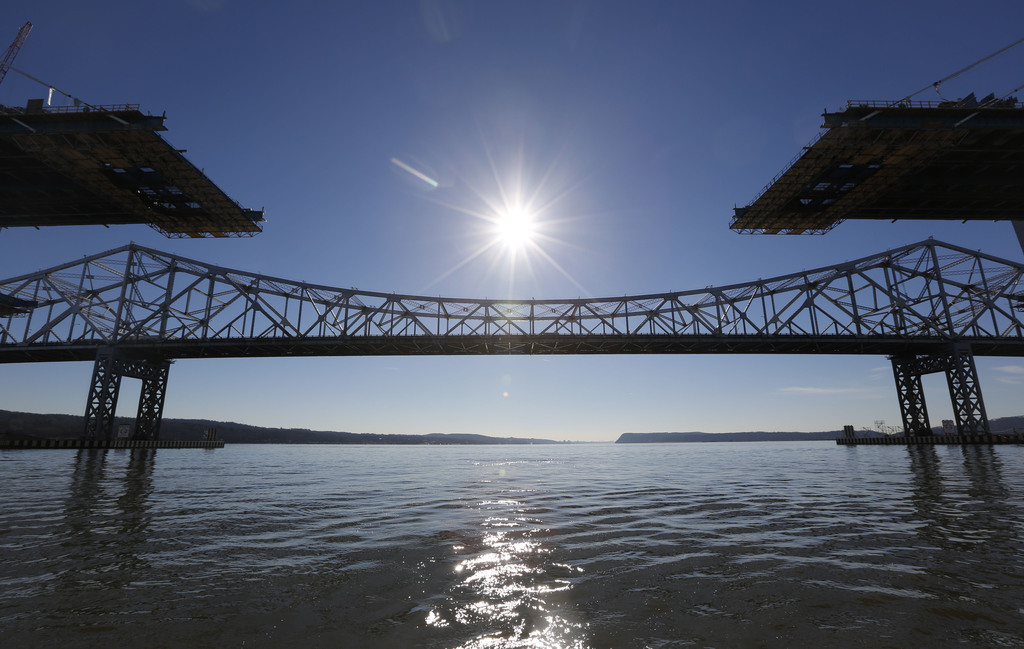 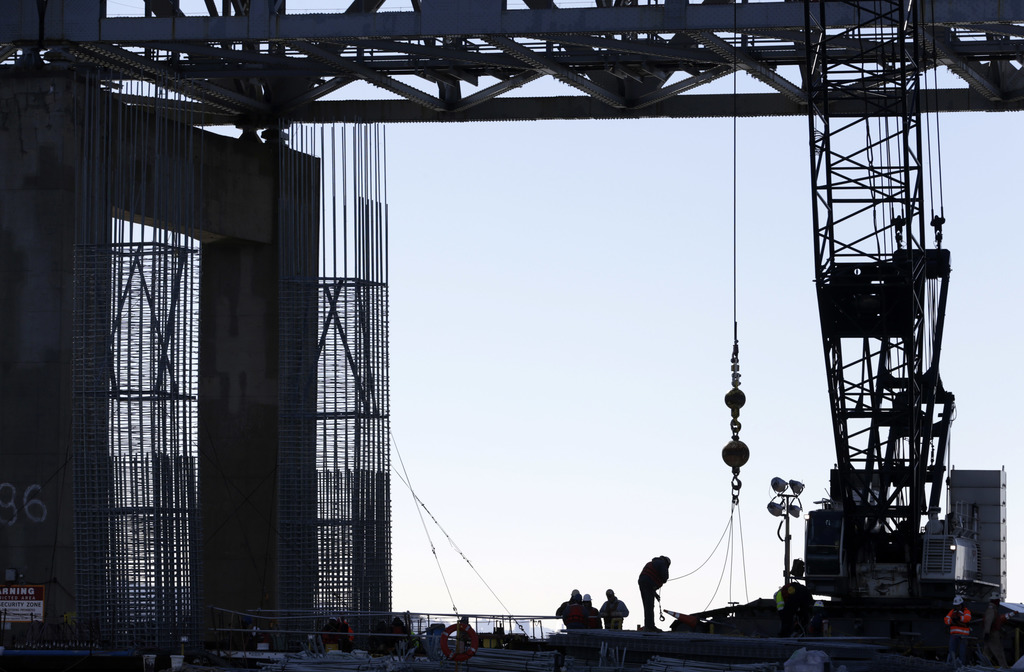 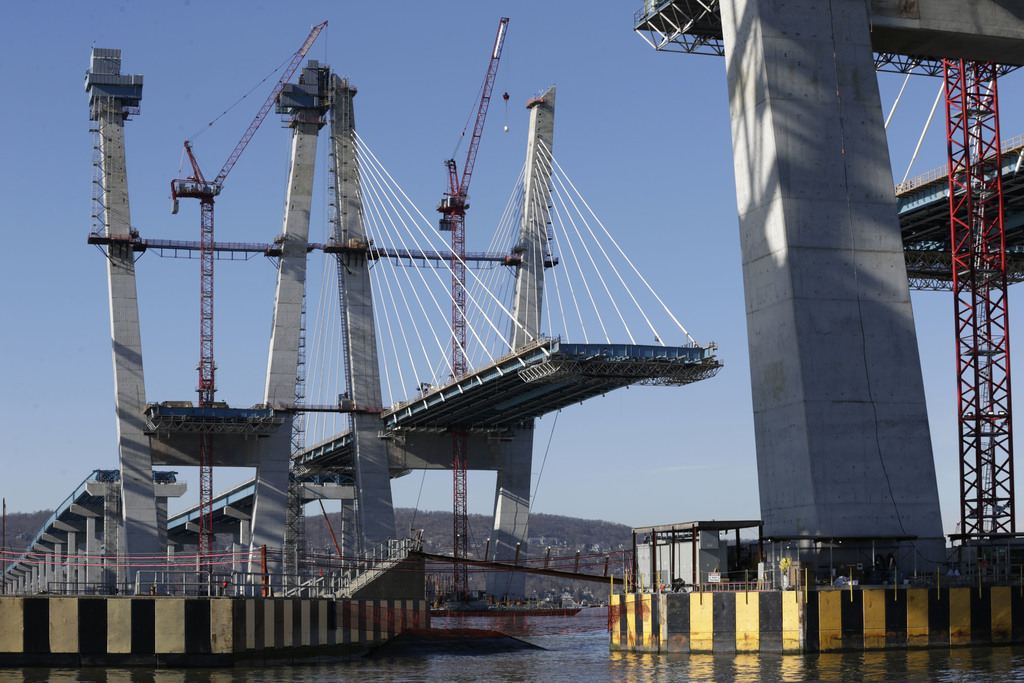 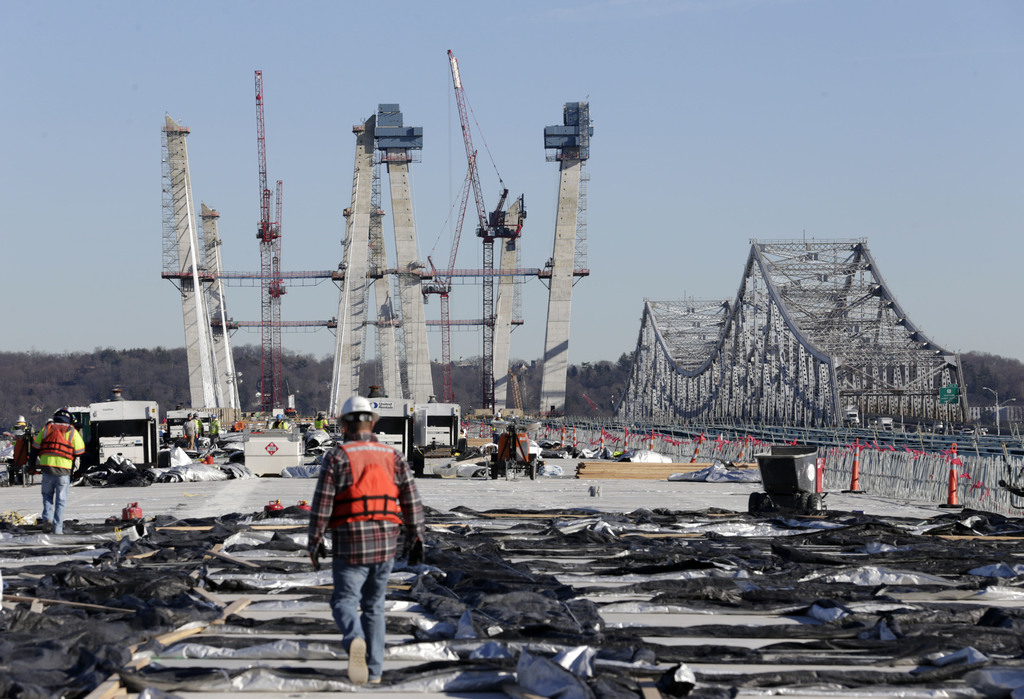 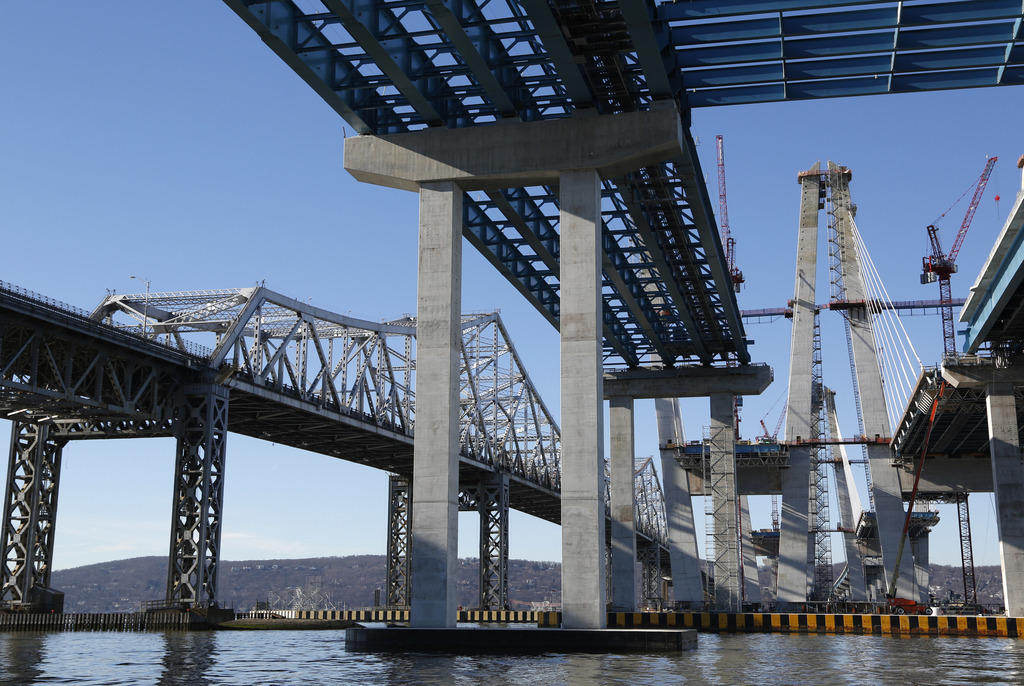 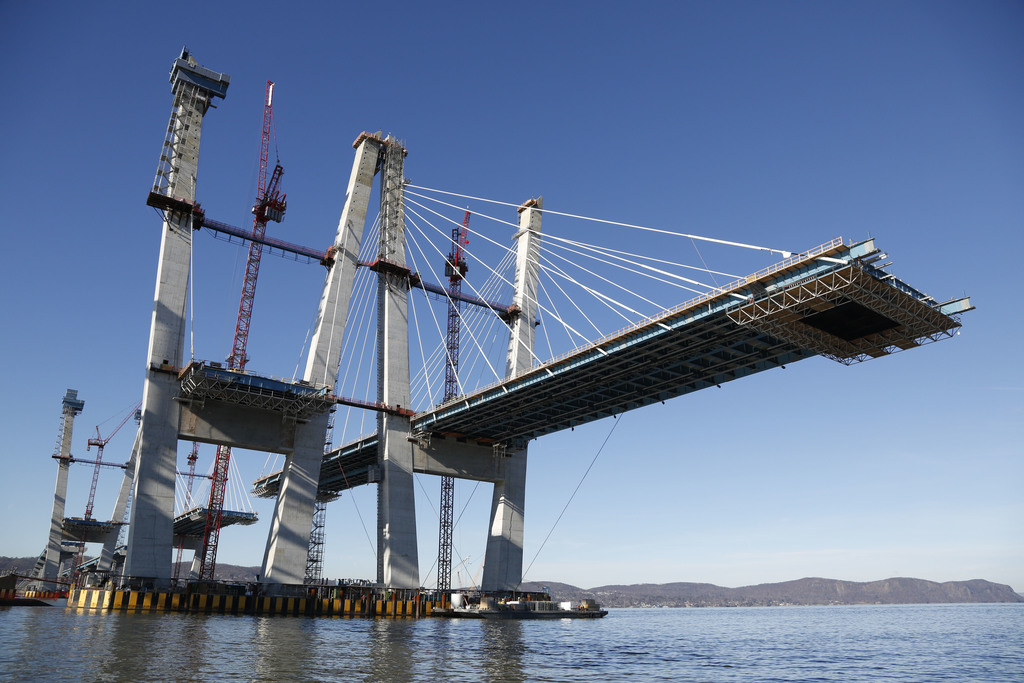 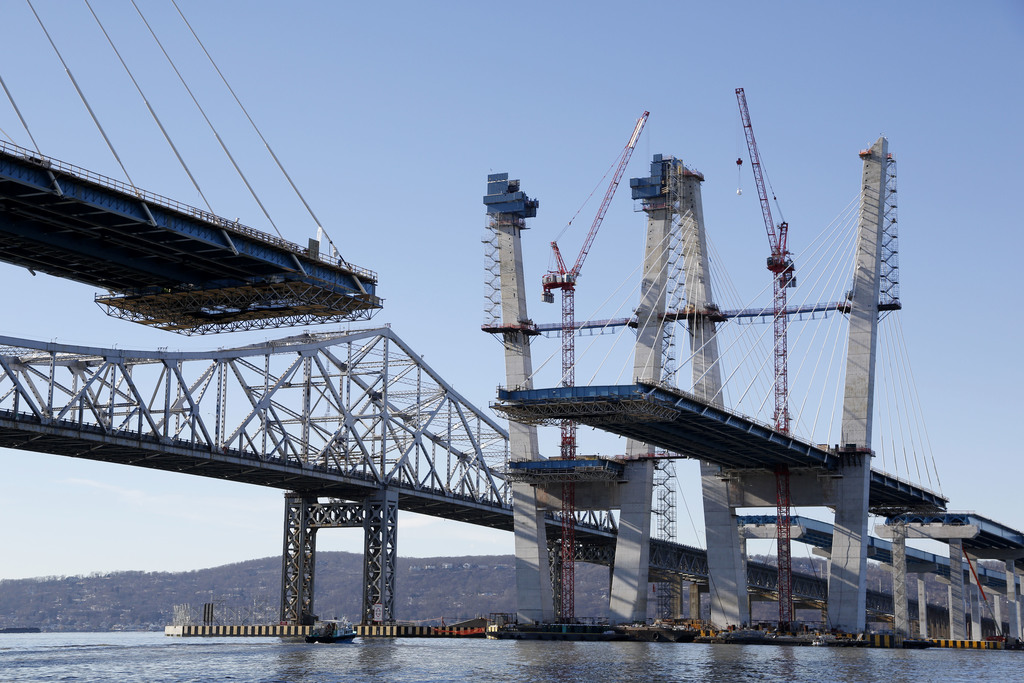 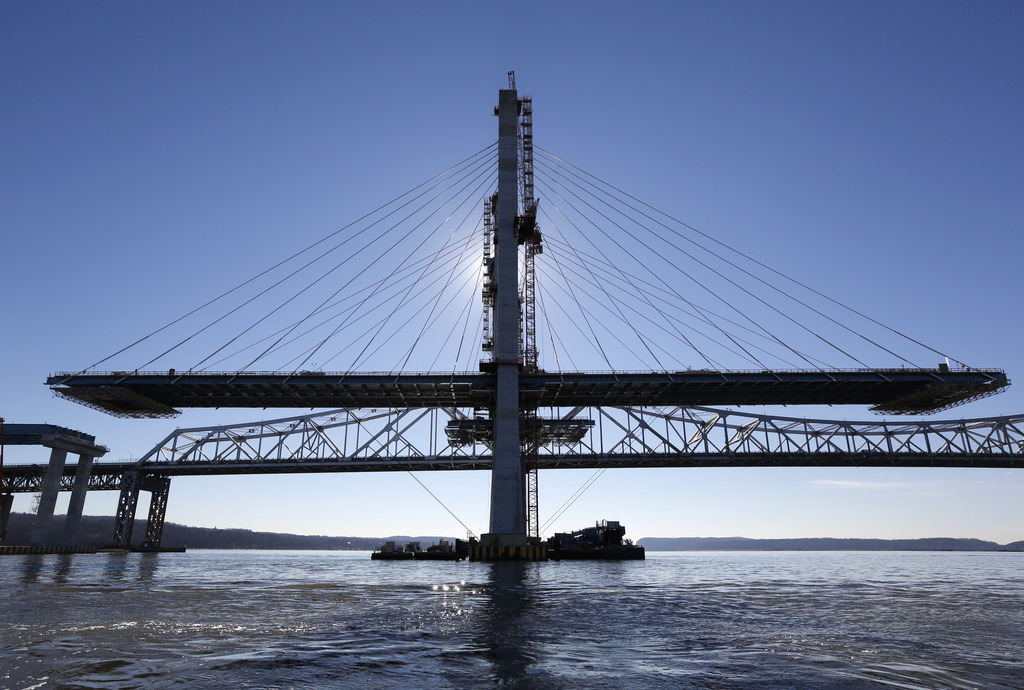 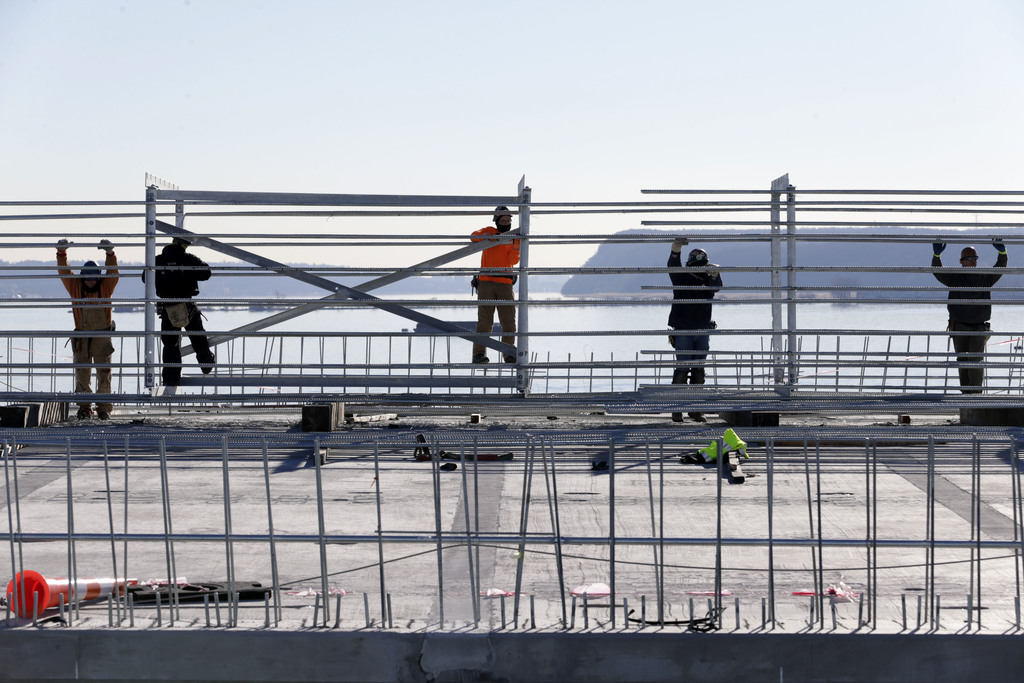 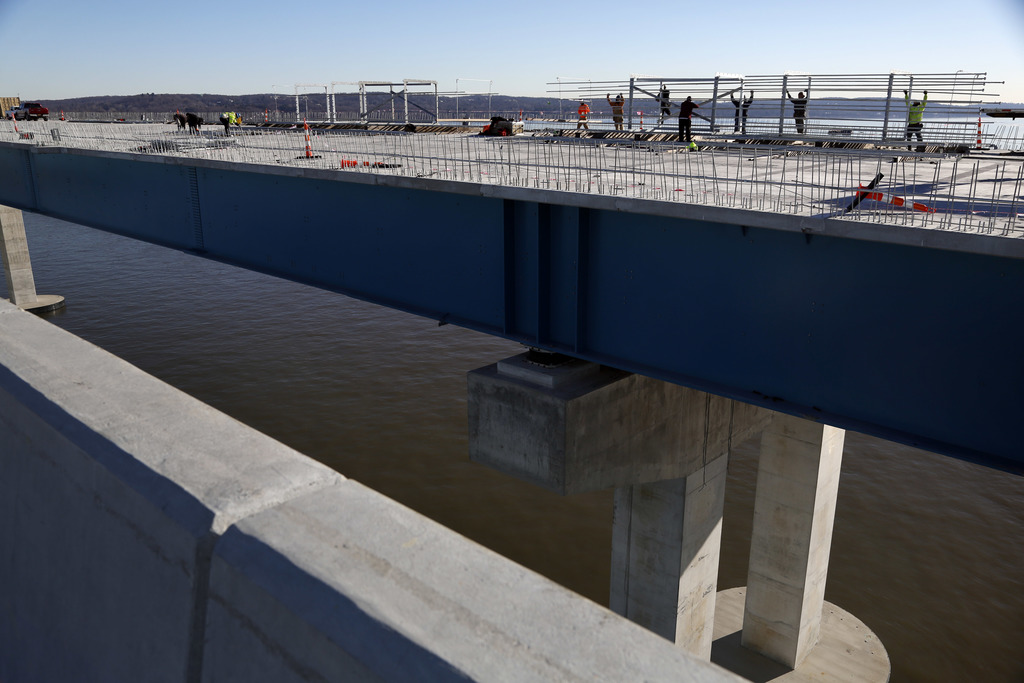 TARRYTOWN, N.Y. (AP) — The concrete needed for New York's new, $4 billion Tappan Zee Bridge, under construction over the Hudson River, would be enough to make a 1,500-mile sidewalk reaching all the way to Florida's Key West.

And the floating super-crane that hoisted 220 million pounds of steel girders for the road deck is so powerful it could lift a dozen Statues of Liberty.

The monumental infrastructure project hit another big milestone recently with the completion of the eight massive towers that will support the span as it crosses one of the river's widest points.

The bridge is one of the largest public infrastructure projects underway in the U.S. When complete, it will be both a monument to engineering and a successful restoration of a vital link in the northeast U.S. highway system.

Without the bridge, the next Hudson crossing is 20 miles north and carries a sliver of the traffic volume. The next crossing to the south is through traffic-choked Manhattan, barely visible 25 miles in the distance.

From a tugboat named Tappan Zee II, an AP reporter and photographer got a close-up view this week of the sleek 21st century structure that will replace the adjacent, 61-year-old old Tappan Zee Bridge that takes more than 50 million vehicles a year across the mighty river.

THE PROJECT SO FAR

Work on the 3-mile bridge began in 2013. The main components are in place for eight traffic lanes and four breakdown and emergency lanes, plus space for express buses and a bicycle and walking path with viewing areas.

The touring tugboat passed concrete production plants floating on barges by the bridge, squeezing out the essential material for construction.

The incomplete roadway of the new bridge is already paved with an earth-toned concrete polymer for a smooth ride. At one point, it ends, revealing the raw structural guts underneath, with a sea of black plastic protecting freshly poured concrete.

New York Gov. Andrew Cuomo said he made replacing the old Tappan Zee a priority because it was disintegrating and eating up hundreds of millions of dollars for basic repairs just to keep motorists safe. At one point, concrete fell off in chunks, leaving holes in the roadway through which the river water was visible.

After decades of political squabbling and futile planning, the New York Thruway Authority obtained a $1.6 billion federal loan to enable the work to start. The remainder of the cost is being financed with state funds and government bonds. Design and construction was led by a private consortium called Tappan Zee Constructors.

Cuomo calls the new bridge a "great monument to possibility."

"New York was founded on a confidence where we said we could do it when everybody else said they can't," Cuomo said the day the towers were topped off in mid-December. "That's what this bridge stands for."

As with many big building projects, the work on the bridge hasn't been accident free.

In July, one of the cranes working on the bridge broke apart while using a 121,000-pound hammer to drive pilings into the river bottom. The crane's huge boom toppled onto the old bridge, but by some miracle it didn't fall on any moving cars. Three workers suffered minor injuries.

Traffic could start rolling across the Tappan Zee as soon as the summer of 2017, but only onto one of the two separate spans linking Westchester County and Rockland County, according to Thruway Authority spokesman Khurram Saeed. It will be at least another year before it's fully open to traffic. Before the other four-lane span is completed, each end of the original bridge must be demolished to make room for land access.