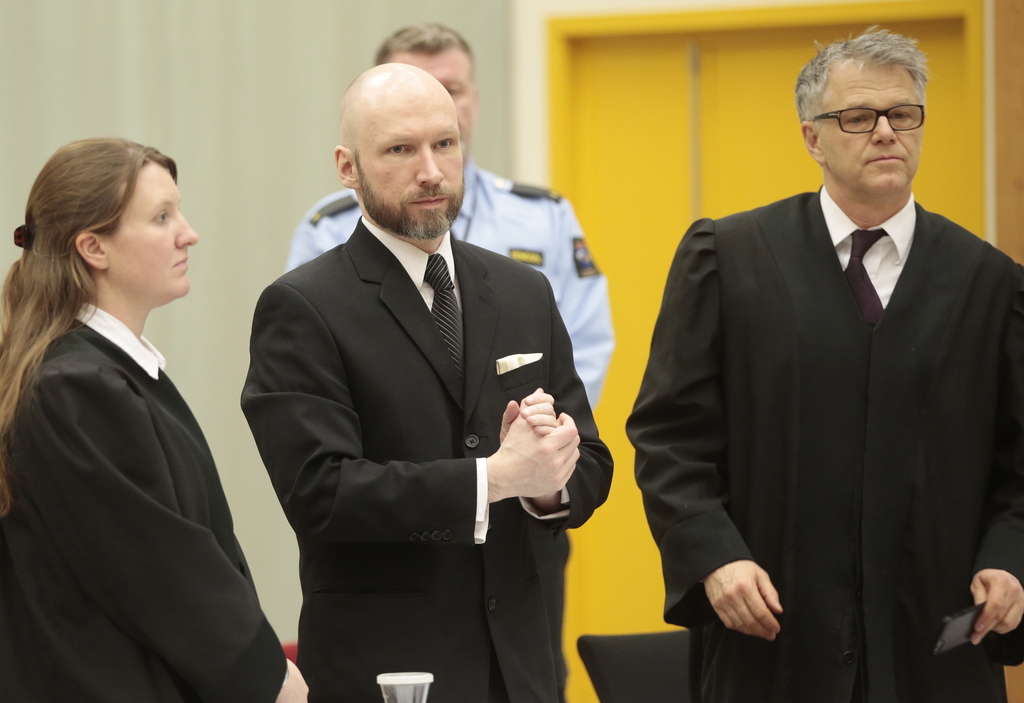 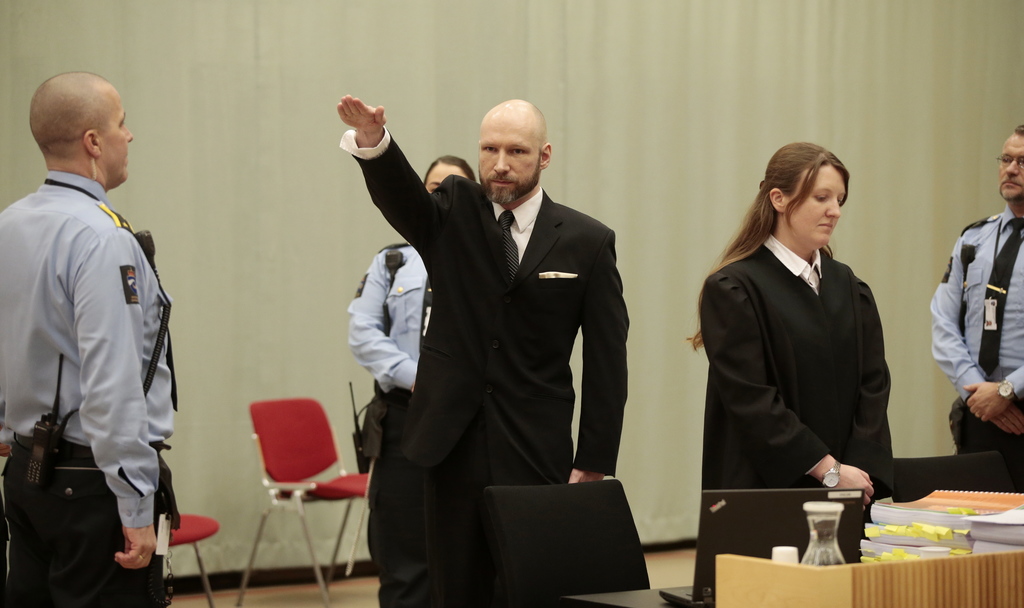 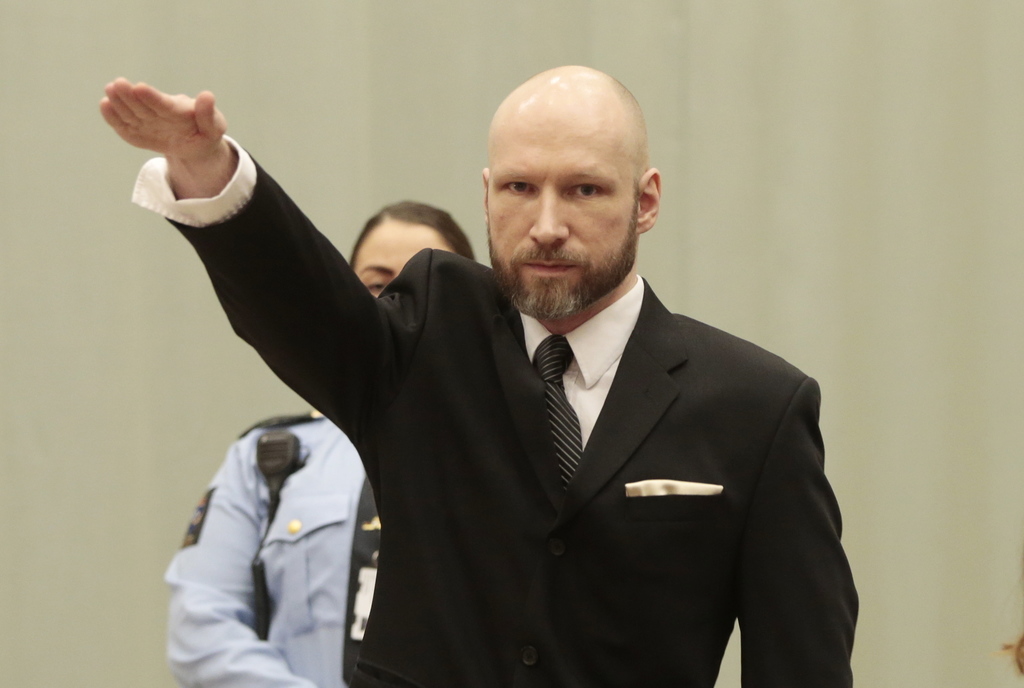 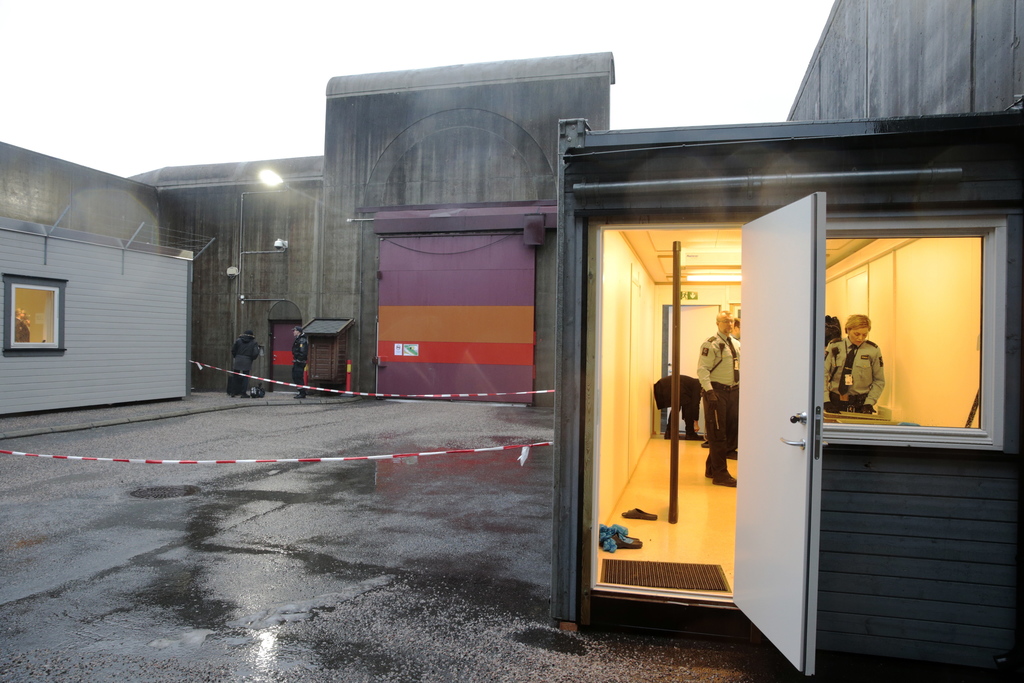 SKIEN, Norway (AP) — Norwegian mass murderer Anders Behring Breivik, who killed 77 people in a 2011 rampage, is in touch with fellow right-wing extremists from behind bars, a government attorney said Wednesday, arguing that Breivik must be held in solitary confinement.

Sejersted said the self-proclaimed neo-Nazi continues to spread extremist ideology through voluminous writings and that his correspondence should still be monitored and his letters opened.

Officials maintain the 37-year-old right-wing extremist is still dangerous and must remain isolated from inmates in the high-security prison in Skien, 135 kilometers (85 miles) southwest of the capital, Oslo, where the appeals case was being heard in a makeshift gym. Breivik is to take the floor Thursday in court.

Breivik sued the government last year, arguing that his solitary confinement, frequent strip searches and the fact that he was often handcuffed in the early part of incarceration violated his human rights.

In a surprise verdict, the Oslo District Court in April sided with Breivik, finding that his isolation was "inhuman (and) degrading" and breached the European Convention on Human Rights. It ordered the government to pay his legal costs.

But it dismissed Breivik's claim that his right to respect for private and family life was violated by restrictions on contacts with other right-wing extremists, a decision that Breivik is appealing.

Sejersted told the court that Breivik continues to try to find ways of bypassing the censorship of his correspondence, including in an ad to find a marriage partner.

"The text is structured like a personal ad, because he knows that personal ads have special protection in Strasbourg," the seat of the European Court of Human Rights.

Sejersted also said Breivik's prison conditions are better than for many other inmates. He has a three-cell complex where he can play video games, watch TV and exercise, in compensation for his solitary confinement. He is served coffee and newspapers, often plays video games on the Xbox console, watches movies and spends much time studying.

But Sejersted told The Associated Press that Breivik is still "very deeply engaged in his political right-wing, extremely neo-Nazi project" — after the July 2011 bomb attack at government headquarters where eight people died, followed by the Utoya island shooting spree where he shot and killed 69 other people.

"He is continuing the same plan that he laid down 10 to 12 years ago before the massacre at Utoya, that he would do this terrorist action and then if he was not killed during the operation and ended up in prison he would continue as a fascist, right-wing extremist ideological leader," Sejersted said. "That is what he's trying to do now."

Breivik arrived in court in a black suit with a shaved head and beard. He refrained from making a Nazi salute as he did on the first day of the hearing when he was admonished by the judge.

Breivik was convicted of mass murder and terrorism in 2012 and given a 21-year prison sentence that can be extended for as long as he's deemed dangerous to society. Legal experts say he will likely be locked up for life.

Breivik's lawyer, Oystein Storrvik, said the case against the state was important because "in reality, it will have significance for the rest of his life" and that his conditions should be as humane as possible.

"One can say with great certainty that he will never get a parole hearing," Storrvik said.

At the time of the 2011 attacks, Breivik claimed to be the commander of a secret Christian military order plotting an anti-Muslim revolution in Europe, but now describes himself as a traditional neo-Nazi who prays to the Viking god Odin.

Six days have been reserved for the hearings by the Borgarting Court of Appeals. A ruling is expected in February.