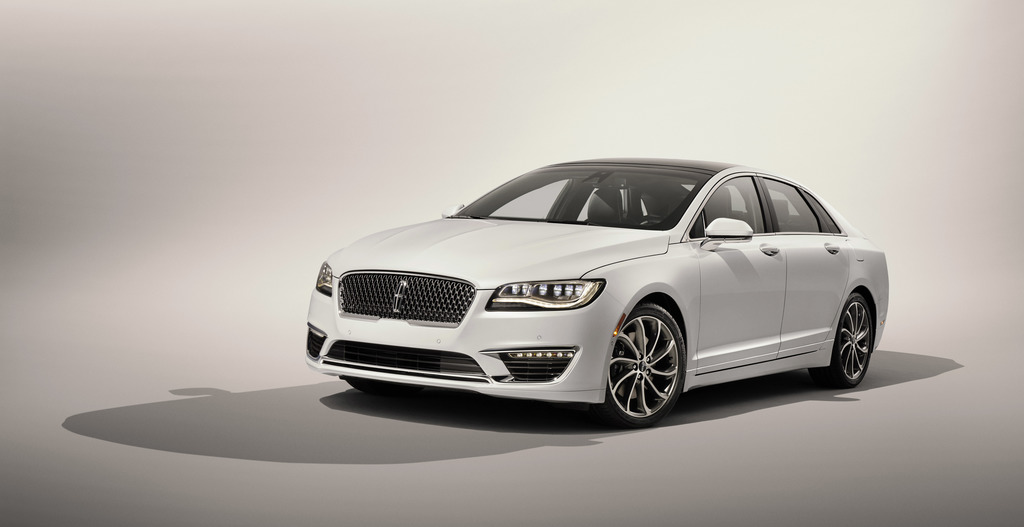 For 2017, Lincoln continues to improve its midsize MKZ Hybrid sedan by adding a Jaguar-esque grille, easier-to-use audio and ventilation controls and an upgraded interior.

The fuel-efficient, five-seat MKZ gasoline-electric hybrid continues to separate itself from competitors by being priced the same as non-hybrid MKZ models.

The starting manufacturer's suggested retail price, including destination charge, is $36,095 for a base hybrid MKZ Premiere with a 188-horsepower, non-turbo four-cylinder mated to an electric motor and lithium ion battery pack. It's rated at 41 mpg in city driving and 38 mpg on highways, putting it in the top 10 in fuel economy among 2017 gas-electric hybrid sedans sold in the U.S.

Buyers will pay the same MSRP for a non-hybrid Premiere with 245-horsepower, turbocharged four-cylinder engine that is rated at 21/31 mpg.

Other gasoline-electric hybrid sedans are typically priced $3,000 to $4,400 more than their base non-hybrid counterparts. For example, MKZ sibling Ford Fusion has a non-hybrid, base S model with a starting MSRP plus destination charge of $22,994, while the base 2017 Fusion Hybrid S starts at $26,060. Obviously, the base Fusion Hybrid doesn't include standard features found in the MKZ hybrid, such as 10-way, power-adjustable front seats and Lincoln premium audio system with 11 speakers.

The 2017 MKZ is a recommended buy of Consumer Reports magazine, which predicts reliability to be average. It also earned five out of five stars in federal government frontal and side crash testing.

The new grille, reminiscent of Jaguar, replaces a split-wing grille and takes a styling cue from Lincoln's sleek Continental. The MKZ's styling largely remains the same, leaving thick metal pillars around the windows that obscure driver visibility in front and back.

Inside, the 2017 MKZ uses the touchscreen-activated Microsoft Sync 3 system, which allows drivers to more directly control ventilation, audio and navigation than the previous Sync version did. There also are new physical buttons and knobs on the MKZ Hybrid dashboard, so drivers can skip Sync 3 to tune the radio, for example.

The gimmicky gear changer, however, is still in the MKZ Hybrid: a vertical array of buttons on the dashboard from which to select park, reverse, drive, etc. There is no usual gearshift lever in the center console, and in the test car, the tactile feedback from the shift buttons was lacking.

The MKZ Hybrid rode smoothly and kept road bumps from passengers, but power was sometimes anemic in Eco driving mode.

The interior wasn't as quiet as expected, particularly when the car was accelerating, and the constant drone from the Continuously Variable Transmission (CVT) intruded into the passenger compartment.

The steering felt light. But the car's 2-liter, Atkinson-cycle four cylinder supplemented by an 88-kilowatt electric motor and lithium ion battery pack gave startups a solid, spunky feel, even for the nearly 3,800-pound vehicle— about the same weight as a small SUV.

The test vehicle didn't get anywhere near the government fuel economy ratings, but the average 34 mpg in mostly city travel still impressed because no fill-up was needed for more than 470 miles. The car does get higher fuel mileage in city driving than highways because the fuel-saving electric motor and battery pack are most active in city driving conditions.

The MKZ Hybrid's back seat is best for two riders, not three, because of a large hump in the center of the floor. Trunk space is at a premium — only 12 cubic feet — due to the battery pack behind the back seats.