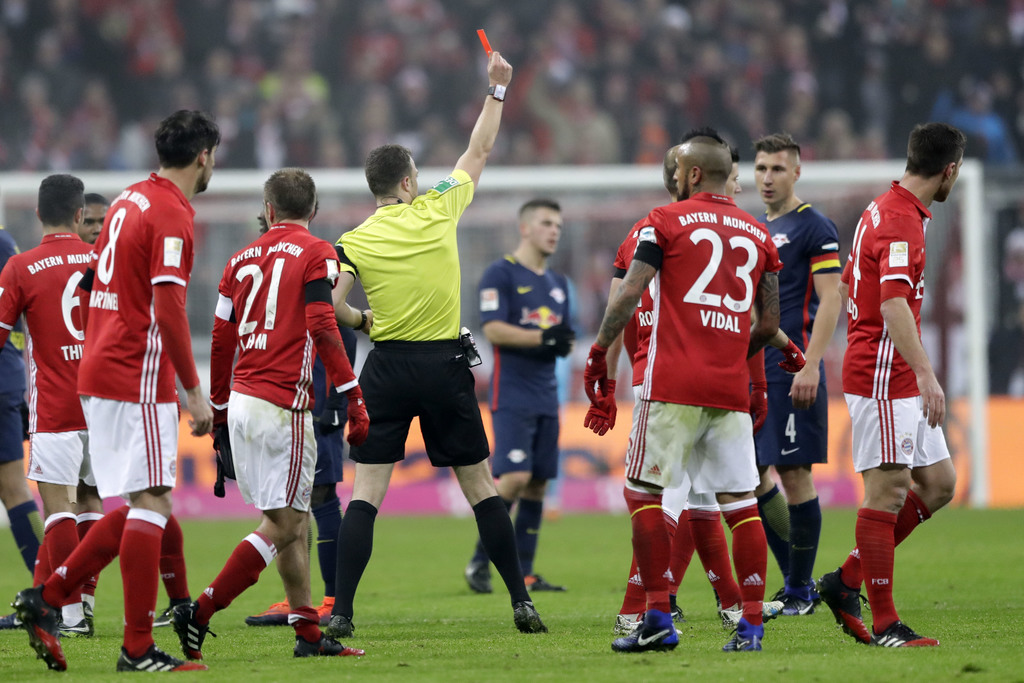 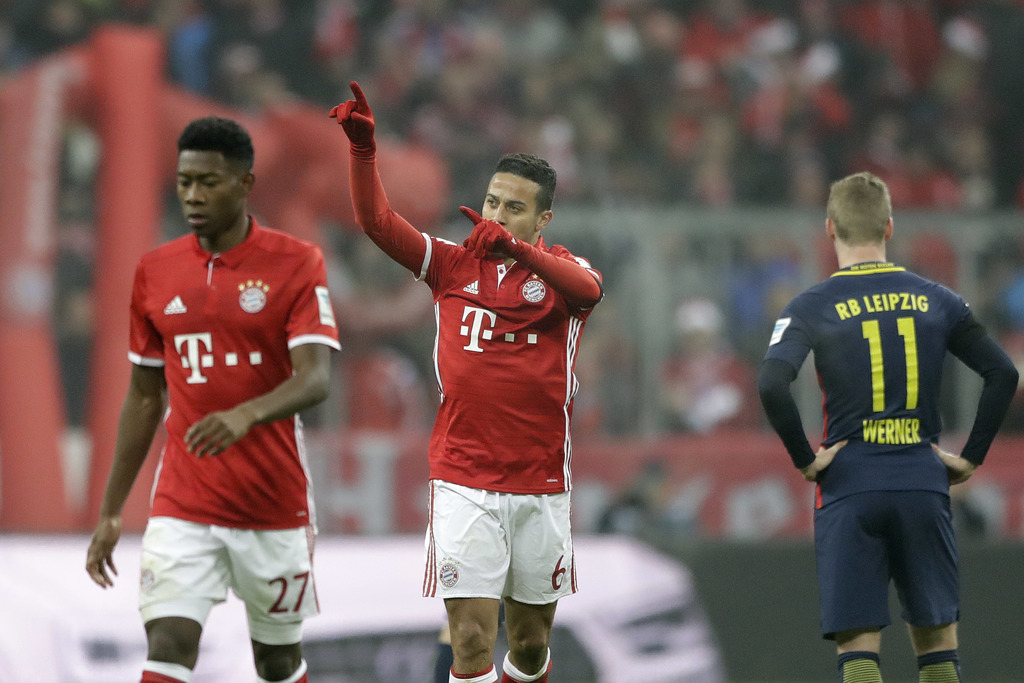 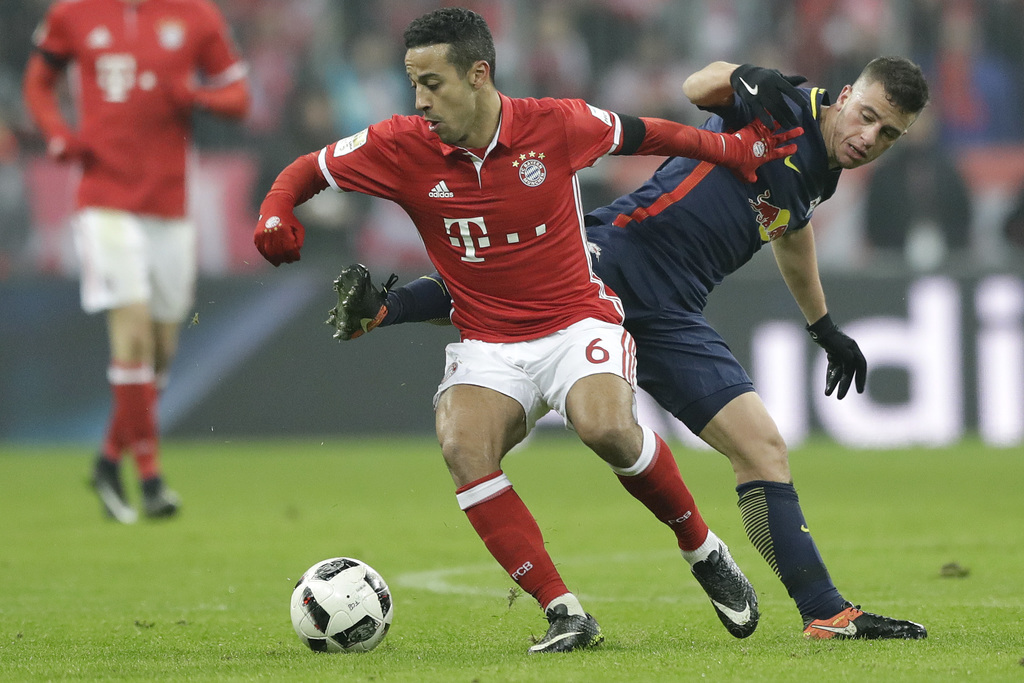 BERLIN (AP) — Few imagined at the start of the season that a fifth-tier club upon its foundation in 2009 would prove Bayern Munich's biggest obstacle to an unprecedented fifth straight Bundesliga title.

But Leipzig has got the rest of the league sitting up and taking notice, even if it failed its biggest test Wednesday by losing 3-0 in Munich.

"A lesson," Leipzig coach Ralph Hasenhuettl called it, as a sense of normality returned to the top of the league.

Elsewhere, however, the big clubs are struggling, with Leipzig trailed by a host of unlikely candidates as sheer graft and untiring teamwork prove their worth over underperforming stars.

Modest Freiburg, which won the second division ahead of Leipzig last season, is enjoying its best season since 2012-13 despite a net investment of just 5 million euros ($5.2 million) on transfers following promotion.

Coaches have been paying the price for their sides' ineptitude.

Borussia Moenchengladbach's Andre Schubert became the seventh Bundesliga coach to lose his position this season on Wednesday, and it's unlikely he'll be the last with counterparts at Wolfsburg and Bayer Leverkusen facing uneasy Christmases.

One man who'll enjoy the festivities is Bayern president Uli Hoeness, back in charge after serving half of his 42-month prison term for tax evasion.

More than 97 percent of 7,152 club members voted for the 64-year-old Hoeness to take his old position in November and the club bounced back from two straight defeats the next day. Bayern has won each of its six games since his return.

It seems only Leipzig can stop Bayern from claiming yet another title with the likes of Borussia Dortmund, Bayer Leverkusen, Moenchengladbach, Wolfsburg and Schalke all faltering.

Carlo Ancelotti made the best start by any Bayern coach, winning seven competitive games straight before Atletico Madrid ended his run in the Champions League.

That's where his tenure will be judged after predecessor Pep Guardiola failed to capture Europe's biggest prize in three seasons at the Bavarian club.

Ancelotti has had to listen to some criticism as Bayern no longer looked as dominant as in previous seasons, but the Italian is experienced enough to have heard it all before.

Leipzig's original aim for the season was stability in the top flight, but now Europa League or even Champions League football is a real possibility. The title is probably just one dream too many for Hasenhuettl's side.

Leipzig's push at the top of the table would not be possible without the contribution of Naby Keita.

The combative Guinea international, who arrived from sister club RB Salzburg in the summer, has been producing standout performances from the outset, pulling the strings in Leipzig's midfield, acting as a pivot between defense and attack, and chipping in four goals as well as setting up two more.

Keita was laboring with a strain before the Bayern game and uncharacteristically caught in possession for one of the goals. Clearly not fully fit, he was taken off at half time as Leipzig slumped to only its second defeat in his absence.

Serge Gnabry is showing that he made the right decision to switch from Arsenal to Werder Bremen in the summer.

The 21-year-old striker has bagged seven goals and set up two more for Bremen, almost all of them important for a side battling relegation. Gnabry scored again for the second successive game on Wednesday, his late strike against Hoffenheim securing another draw.

Gnabry also announced his presence on the international scene with a hat trick on his Germany debut against San Marino.

Not even Austrian billionaire Dietrich Mateschitz could have imagined when he bought fifth-tier side SSV Markranstaedt and rebranded it in his company's livery to create Leipzig, that the club would be top of the standings 11 games into its Bundesliga debut seven years later.

Mateschitz, who made his fortune through energy drinks manufacturer Red Bull, financed Leipzig's progress through the lower leagues, but this season's immediate success in the top flight is unexpected for everyone involved.

"It's also surprising for us," Hasenhuettl told The Associated Press.

Not everyone is happy with the side's investment-enabled progress. Leipzig's team bus has been pelted with stones, had paint thrown at it by masked assailants, its players have been taunted, and a severed bull's head was thrown during a cup match against Saxony rival Dynamo Dresden early in the season.

But Leipzig's performances have earned respect, too, and it looks as if the young club is here to stay.

After raising expectations again in his first season at Dortmund, coach Thomas Tuchel is coming under pressure to meet them in his second, despite working with a young, unsettled team after a summer of intense transfer activity.

Dortmund fans whistled Tuchel's side off the pitch after Tuesday's draw at home to Augsburg. It was the team's third consecutive league draw and it highlighted its inconsistency after brilliant displays earlier in the season.

That potential, clearly displayed on various occasions, is what's causing frustrations with Dortmund's inability to grind out wins even when it dominates games.

Dortmund is already 12 points behind Bayern at the halfway stage.