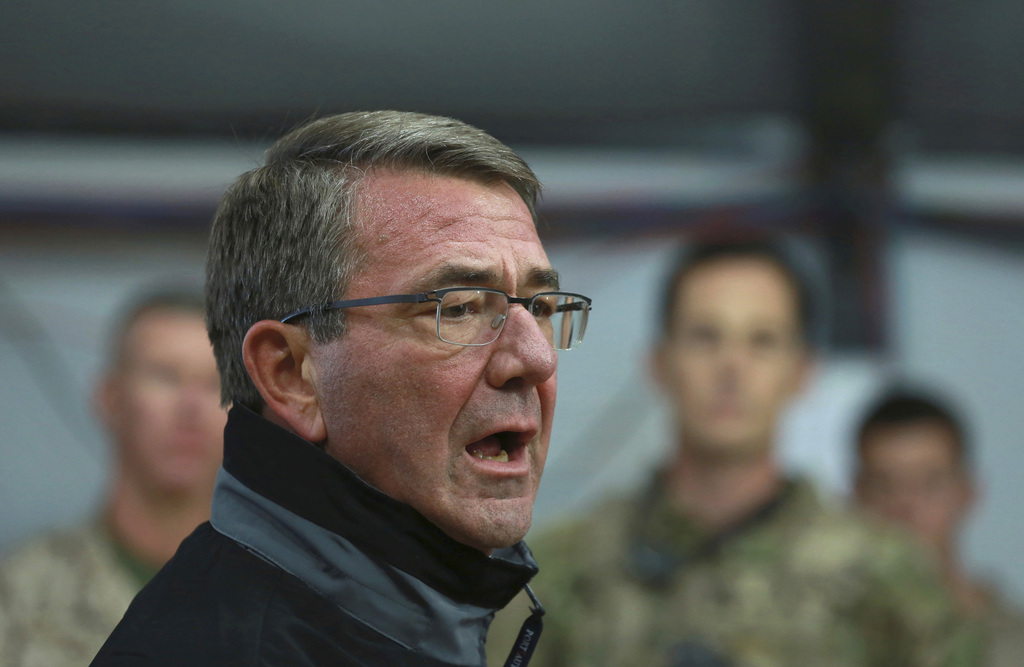 NEVATIM AIR FORCE BASE, Israel (AP) — The vanguard of Israel's new fleet of F-35 fighter jets roared onto the Nevatim air base Monday, ushering in a new era for Israeli air power and sharpening its military edge in a volatile Mideast.

An elaborate ceremony at Nevatim in southern Israel was delayed several hours because poor weather kept the F-35s from taking off from Italy for the flight to Israel.

"We value this commitment to the alliance with Israel," he said.

Netanyahu issued a warning to Israel's enemies. "I want to also say clearly, anyone who thinks to attack us will be attacked, anyone who thinks to destroy us is positioning themselves to an existential threat. That is a vital condition to ensure our future. History teaches us a simple thing: weak states don't survive," Netanyahu said in Hebrew.

Carter said the U.S. "is more committed to Israeli security than ever before," and the F-35s are evidence of that.

"From its stealth technology to its fighter capabilities, the F-35 will allow pilots to evade detection and fly at supersonic speeds while conducting air defense; intelligence, surveillance, and reconnaissance; or ground attack missions," Carter said.

The F-35 is considered to be the world's most sophisticated new warplane, equipped with stealth capabilities that allow it to evade or delay detection by the top radar systems. Israeli officials believe the plane will give them an advantage over their neighbors for years to come. They are committed to buying 50 of them.

Earlier, the deputy commander of the Nevatim Air Force base in southern Israel said the new fighters will give Israel an upper hand over its neighbors for years to come.

"We are going to be very strong for a long time, having these airplanes. And Israel has to be strong in this region for its existence," said Col. Asaf, who could be identified only by his first name in line with military regulations. "It's a message for everybody that Israel will keep on holding the high-end technology in this area."

The purchase of the F-35 elevates the entire Israeli air force to a higher level, the colonel said, adding that four Israeli pilots have been trained to fly the planes and that more will be shown how to use them.

"This specific airplane is going to be a very good one for the next decades," he said.

In recent years, Israel has reportedly carried out long-range airstrikes as far away as Sudan, and is believed to have struck Hezbollah-bound weapons shipments in neighboring Syria.

Israel has also hinted in the past at making plans to strike Iran, some 1,000 kilometers (625 miles) away, if the Islamic Republic presses forward with its nuclear program. The threat of Israeli action in Iran has dropped since last year's nuclear accord.

The Pentagon's F-35 program has been criticized by members of the U.S. Congress over testing problems, delays and cost overruns. International buyers include Britain, South Korea, Israel, Italy, Australia, Canada, Turkey and Japan.

While the planes were stuck in Italy, U.S. President-elect Donald Trump lashed out against the program. "The F-35 program and cost is out of control," he tweeted. "Billions of dollars can and will be saved on military (and other) purchases after January 20th."

Jeff Babione, the executive vice president and general manager of the F-35 program at Lockheed Martin, defended the cost, saying that as production ramps up the price of an individual jet will fall to $85 million, "in the 2019 or the 2020 timeframe."

"When we get to $85 million dollars, the F-35 will be less expensive than any fourth-generation fighter in the world, and you'll have the premier fifth-generation fighter, so that's an incredible value for anyone operating the airplane," he told reporters at the base.

Associated Press writers Nebi Qena at Nevatim Air Force Base, Israel, and Ian Deitch in Jerusalem contributed to this report.