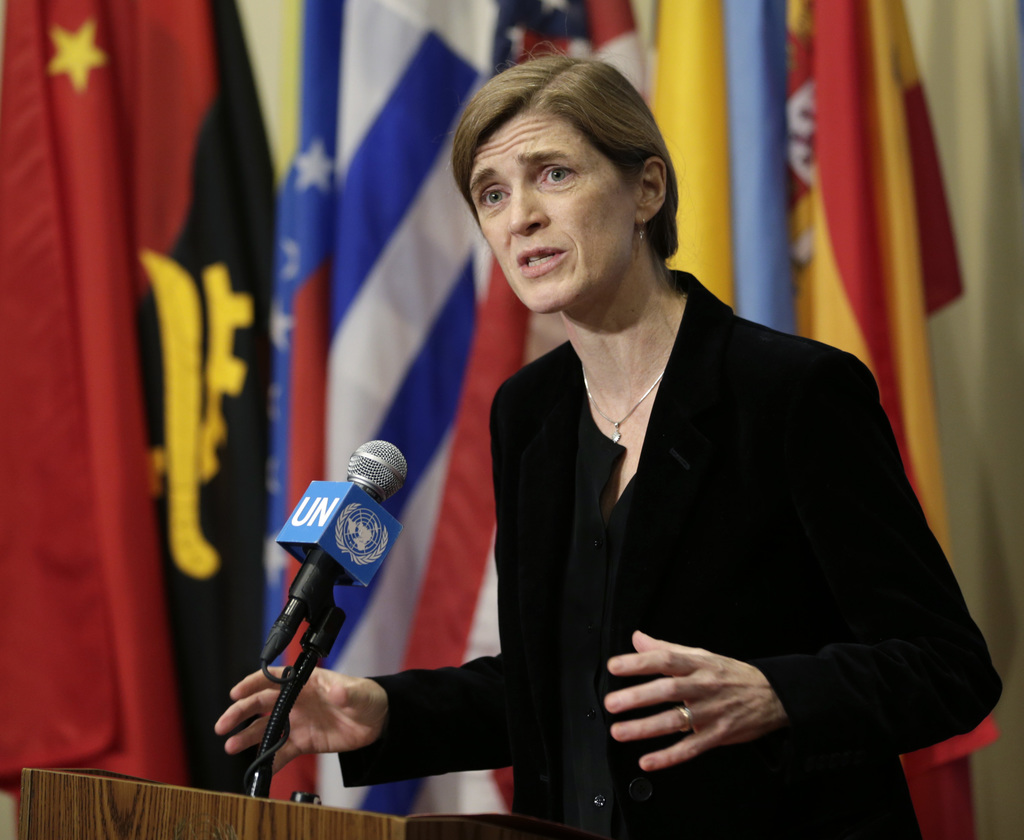 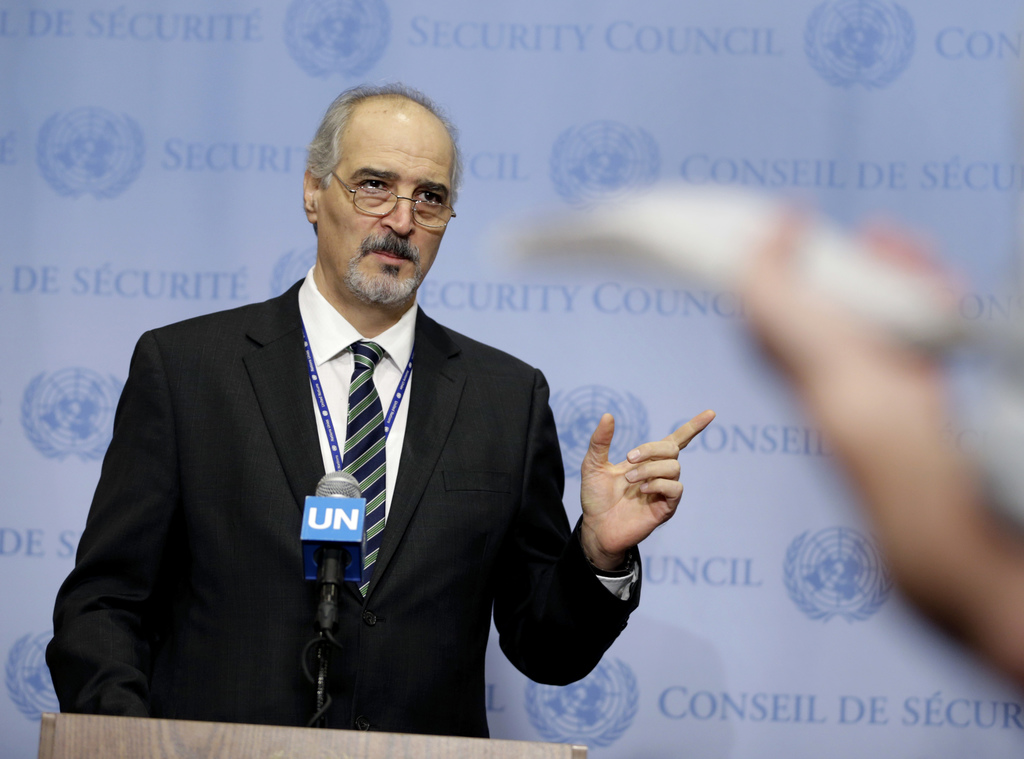 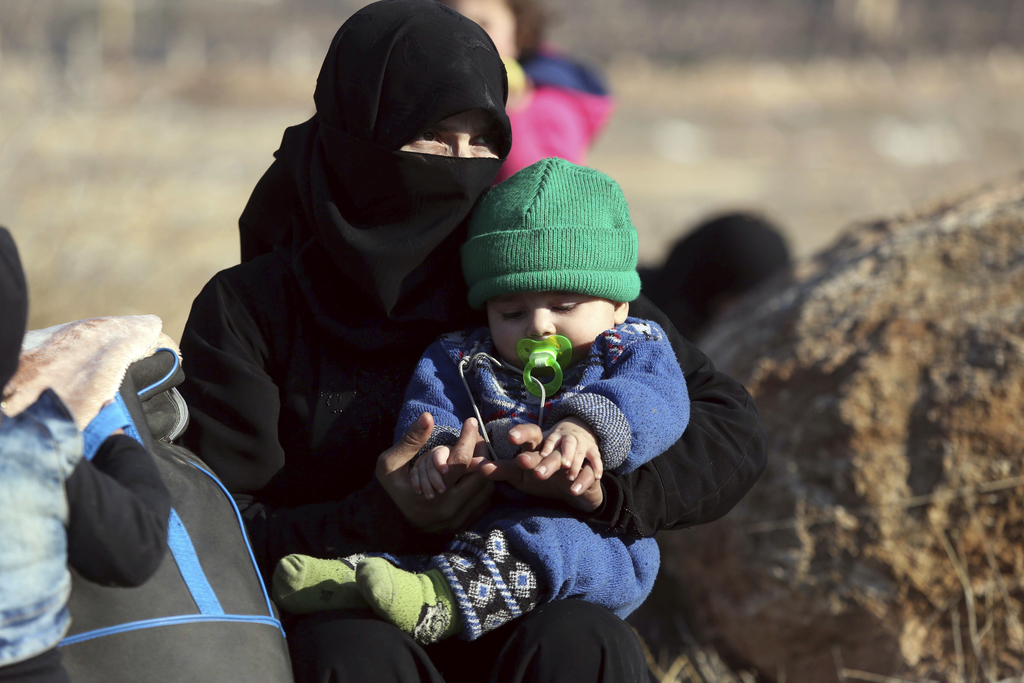 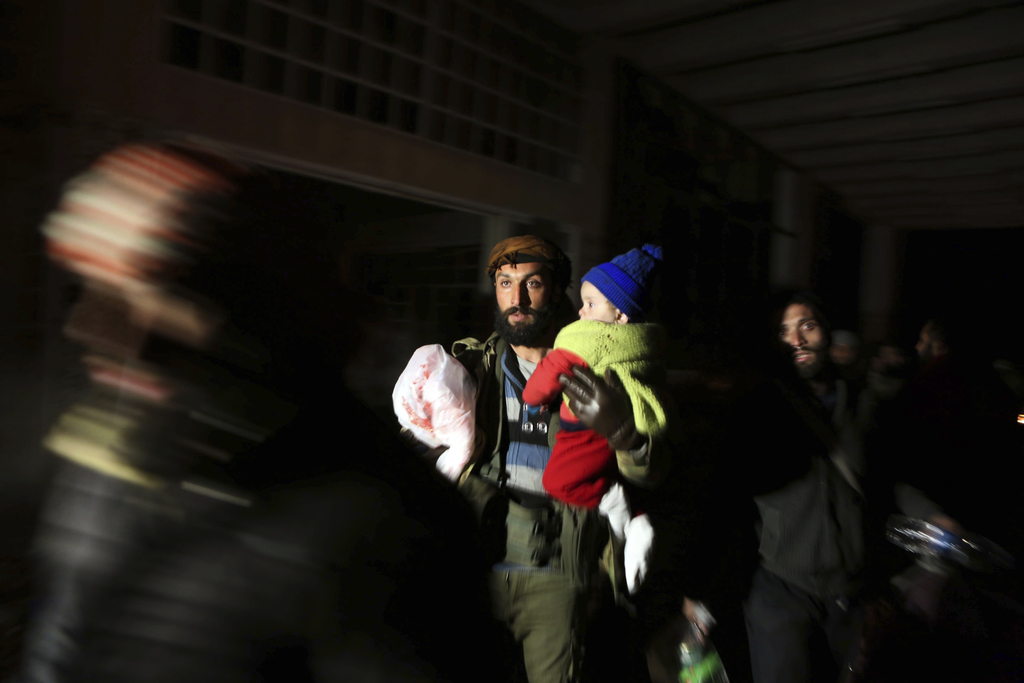 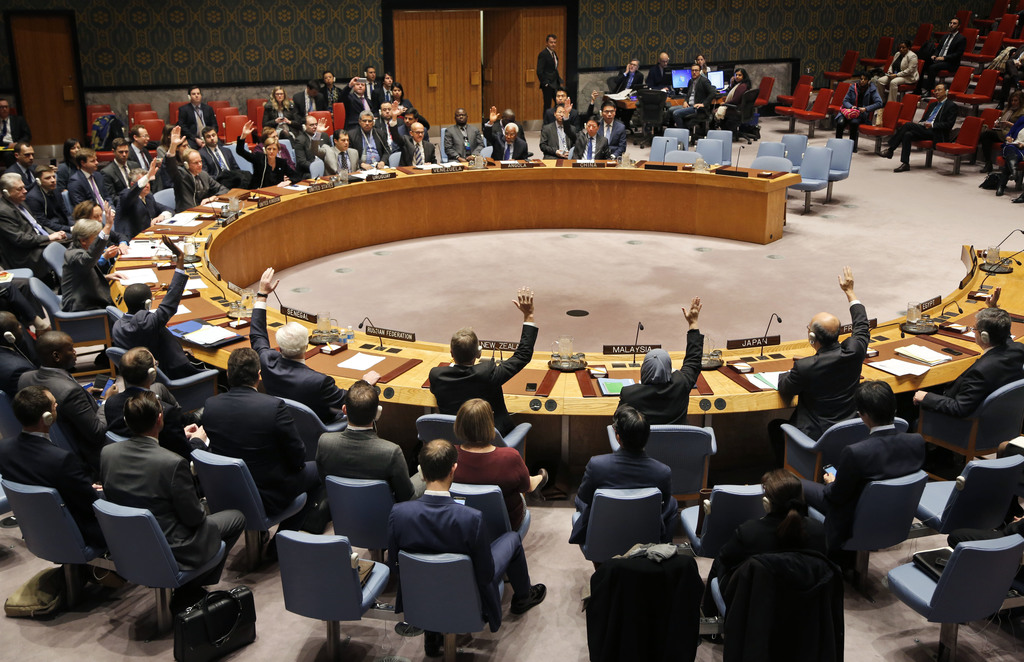 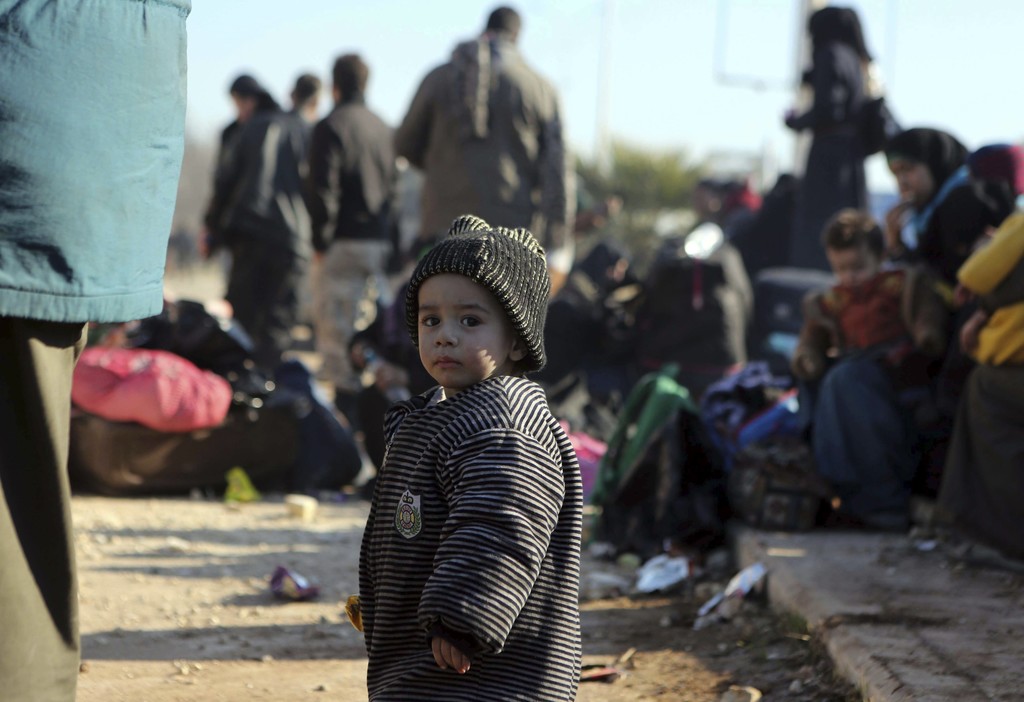 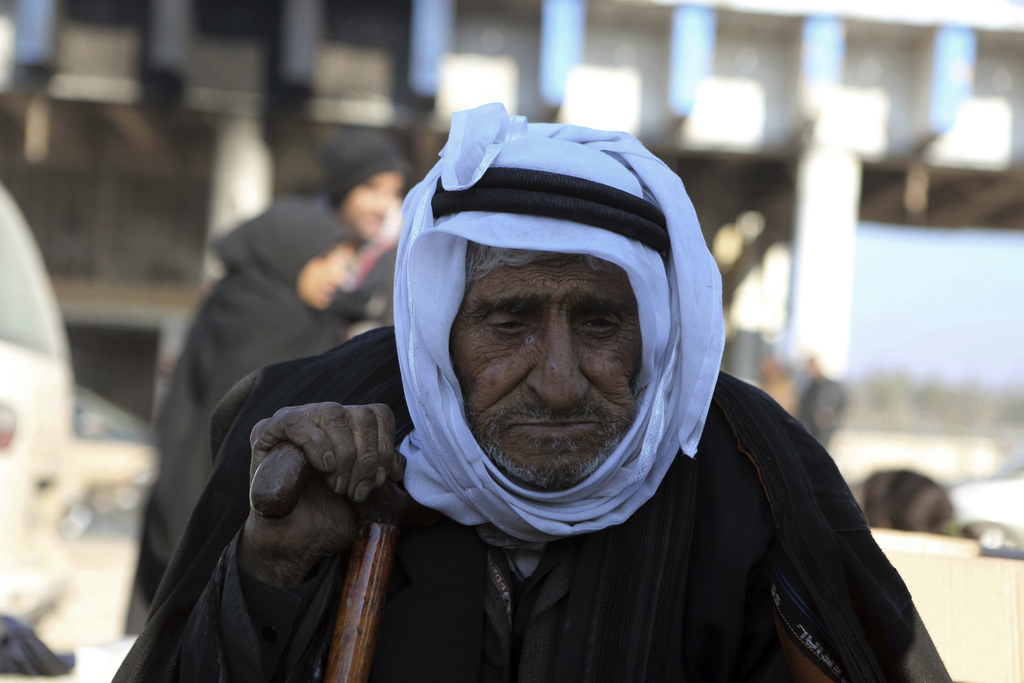 BEIRUT (AP) — The latest on the conflict in Syria (all times local):

Ambassador Samantha Power told reporters after the U.N. Security Council unanimously approved a resolution Monday urging quick deployment of monitors that there are also reports of people being evacuated on buses having their valuables stolen and men of fighting age being detained.

She says it is very clear in the resolution that U.N. monitors are not only to do "neutral monitoring" but to maintain a U.N. presence in the eastern districts of Aleppo.

Power says that "the measure of this resolution" will be how serious Russia, the Syrian government's closest ally, is about seeing it implemented.

She also responded to Syrian Ambassador Bashar Ja'afari's statement that the only U.N. personnel to do monitoring will be those already in Aleppo. Power says the resolution makes clear that U.N. personnel in the area should be used urgently but it also calls on Secretary-General Ban Ki-moon to increase U.N. staff on the ground as appropriate.

Francois Delattre said the goal of the French-Russian compromise resolution adopted Monday is to avoid a repetition of the 1995 Srebrenica massacre of nearly 8,000 Bosnian Muslims — "to avoid new mass atrocities by the forces on the ground and the militias in particular."

With this "fragile" starting point, he said, "we must work hard to create the conditions for a negotiated settlement" to the Syrian crisis.

With the Russians questioning reports of "mass atrocities every day," he said, U.N. observers are needed to be "the eyes and ears of the international community on the ground."

He urged all council members, especially Russia, "to use their influence to make sure this resolution gets implemented."

The United Nations says more than 100 U.N. humanitarian staff on the ground could start monitoring evacuations from former rebel-held eastern Aleppo in accordance with a new U.N. resolution.

U.N. spokesman Stephane Dujarric told The Associated Press on Monday that most of the U.N. staffers in the area are Syrian nationals.

He says the United Nations is also looking at options to bring in staff from other parts of Syria, including Damascus. Dujarric says "they are prepared to move on short notice but the problem has always been an issue of access."

He says there will also be observers from the International Committee of the Red Cross and the Syrian Arab Red Crescent.

Syria's U.N. Ambassador Bashar Ja'afari says the observers will be people from those two organizations and the United Nations. He says "nobody else will come from outside."

The Kremlin says Russian President Vladimir Putin has discussed the situation in Aleppo and the prospects for Syria peace talks with his Iranian counterpart.

The Kremlin said Putin and Iranian President Hassan Rouhani spoke Monday about the situation in Aleppo, adding that they "underlined the need for joint efforts to launch a real political process aimed at a quick settlement in Syria."

It added that the two leaders noted that a quick launch of talks between the Syrian government and the opposition in Kazakhstan's capital, Astana, would be an important step toward that goal.

The conversation comes a day before a scheduled meeting of foreign and defense ministers of Russia, Turkey and Iran in Moscow. Russia and Iran have backed Syrian President Bashar Assad, while Turkey has supported the opposition.

Bashar Ja'afari named 12 alleged officers still trying to get out of eastern Aleppo — six from Saudi Arabia and one each from Turkey, the United States, Israel, Qatar, Jordan and Morocco. He said: "We are going to catch them ... and show them to you."

The U.N. Security Council approved a resolution on Monday urging the immediate deployment of U.N. monitors following a French-Russian compromise.

Ja'afari called it "just another farce of the continued propaganda against Syria and its fight against terrorists."

He also said the resolution concerns observers who are already in Syria, saying "we are not talking about forming or establishing a new force coming from outside."

The resolution adopted Monday calls for the United Nations and other institutions to monitor evacuations from eastern Aleppo and demands that U.N. Secretary-General Ban Ki-moon urgently consult Syria and other parties on security and arrangements for the immediate deployment of the monitors.

France and Russia, who submitted rival draft resolutions, announced agreement on a text after more than three hours of closed-door consultations on Sunday.

The resolution also demands that all parties allow unconditional and immediate access for the U.N. and its partners to deliver humanitarian aid and medical care, and "respect and protect all civilians across Aleppo and throughout Syria."

Turkey has raised the number of people who have been evacuated from eastern Aleppo to 20,000.

Foreign Minister Mevlut Cavusoglu made the announcement Monday through his Twitter account, adding that evacuation efforts from the besieged city were continuing.

Earlier, Cavusoglu had said that some 12,000 people had been evacuated under a deal brokered last week by Turkey and Russia.

The U.N. children's agency says 47 children in an orphanage in the rebel-held section of Syria's eastern Aleppo have been evacuated to safety, though some are in critical condition.

UNICEF had previously expressed concerns about the children inside the orphanage near the front line in eastern Aleppo.

The agency's spokeswoman Malene Jensen said on Monday that the children are being fed, clothed, medically examined and looked after by the agency and its partners, as well as by medical teams.

A UNICEF statement said some were in "critical condition from injuries and dehydration."

It also cautioned that there are many other "vulnerable children" among untold thousands of people still inside eastern Aleppo, according to estimates from the U.N. and humanitarian agencies.

The Russian military says defense ministers of Russia, Turkey and Iran will meet in Moscow to discuss Syria.

The meeting, due Tuesday, will coincide with the meeting of the three nation's foreign ministers, also in the Russian capital.

It says they will discuss ways to resolve the Syrian conflict and help implement U.N. Security Council's resolutions on Syria.

Turkey says some 4,500 people have been evacuated from eastern Aleppo since midnight, as a fragile cease-fire in Syria resumed.

Foreign Minister Mevlut Cavusoglu said through his Twitter account on Monday that a total of 12,000 people have so far been evacuated from the besieged city to an area under opposition control.

The evacuations were made possible through a cease-fire deal brokered by Russia and Turkey that paved way for rebels and civilians to leave the last opposition-held enclave in the city.

Turkey's state-run Anadolu Agency says a total of 131 wounded people — including 46 children — were brought to Turkey for treatment since the evacuations began last week.

The agency says five of them have since died.

Russia is allied with Syrian President Bashar Assad, while Turkey is a leading sponsor of the opposition battling to topple him.

A Syrian activist group and a Lebanon-based TV station say that 10 buses with civilians from two Shiite villages besieged by rebels in the country's north are on their way to government-controlled areas.

The evacuations from Foua and Kfarya were conditions that were added on to a cease-fire deal that paved way for the last rebels and civilians to depart from the remainder of the rebel enclave in the eastern half of the Syrian city of Aleppo.

The Britain-based Syrian Observatory for Human Rights and the pan-Arab Al-Mayadeen TV say the buses left Foua and Kfarya on Monday. More than 2,000 sick and wounded people are supposed to leave the villages.

The U.N. Security Council is expected to vote on a resolution aimed at immediately deploying U.N. monitors to eastern Aleppo, a move France says will be critical to prevent "mass atrocities" by Syrian forces, and especially militias, who captured the rebel stronghold.

The resolution, due to be put to a vote on Monday, comes as thousands more trapped Aleppo civilians and rebels await evacuation in freezing temperatures in the rebel enclave.

The text calls for the United Nations and other institutions to monitor the evacuations and demands that U.N. chief Ban Ki-moon urgently consult all parties on the immediate deployment of the monitors.

France and Russia, who submitted rival draft resolutions, struck a compromise text after more than three hours of closed-door consultations by the U.N. Security Council on Sunday.