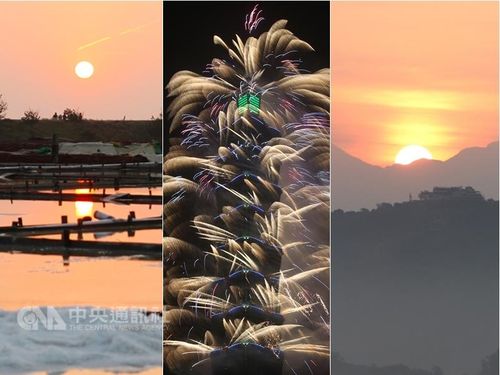 Taipei, Dec. 31 (CNA) Taiwanese are gearing up to welcome the new year on Saturday, with countdown parties and firework shows being held across the island to ring in 2017.

The biggest party, hosted by Sam Tseng (曾國城) and Bowie Tsang (曾寶儀), will take place from 7 p.m. to 1 a.m. at Taipei Civic Square, with a lineup of pop stars including A-Lin and Wu Bai (伍佰).

A firework display scheduled to last 238 seconds will be held at the Taipei 101 skyscraper and involve setting off 20,000 fireworks at the stroke of midnight, along with a first time light show, including 800 lights and special effects around the building.

Now in its 13th year, the Taipei 101 firework display is one of the most watched New Year events in Taiwan, attracting huge crowds of onlookers keen to take part in the countdown in Taipei and enjoy the unique atmosphere of New Year's eve in the capital.

According to Taipei Rapid Transit Corporation (TRTC), which operates the city's metro system, it will transport around 3 million New Year revelers attending the events surrounding the city hall.

Other celebratory events across Taiwan, include one at Janfusun Fancyworld in Yunlin, the Taichung Intercontinental Baseball Stadium -- both in central Taiwan -- as well as E-Da World and Dream Mall in southern Taiwan's Kaohsiung.