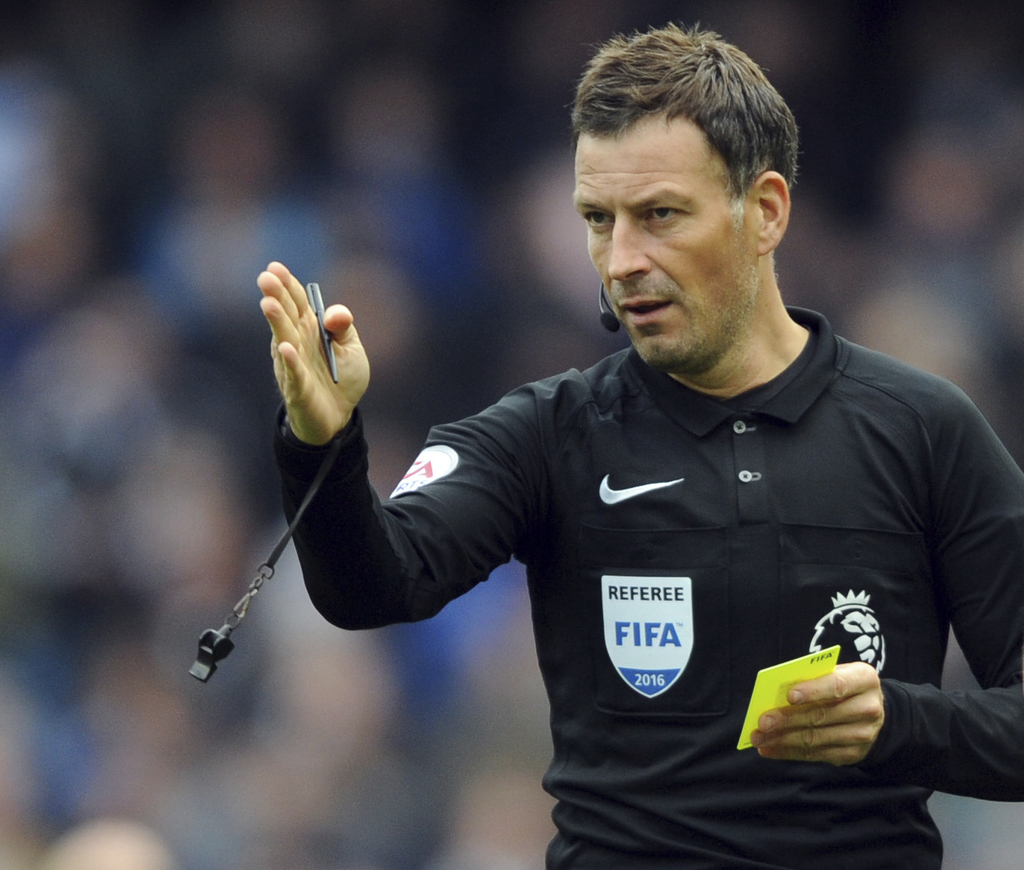 In the hours and even days after blowing the final whistle, Mark Clattenburg endures hidden anguish as the decisions made during 90 minutes of refereeing whirl through his mind.

"If I make a mistake, it beats me up," Clattenburg told The Associated Press during a rare interview.

"It's about being able to cope with you being wrong. I suppose that is something I struggled with in the early part of my career where I couldn't park it and soon I'd make another mistake, another mistake and another mistake."

Rarely is there public praise — only intense scrutiny of any mistakes — for soccer's top referees, particularly when you have overseen football's biggest finals in 2016 like Clattenburg and become as well known as the stars of the game.

It doesn't take long for Clattenburg to become aware after matches when he has erred in the heat of the moment with millions watching worldwide. The social media backlash and managerial outbursts against referees are inevitable. Even if Clattenburg tried to blank out such public criticism, there are the private messages received on his phone with critiques from assessors flagging up mistakes.

"You have some video clips sent to you on your phone (in the Premier League) or in Europe you have comments on your mobile phone after the match," the 41-year-old Englishman said. "You will know if you have done OK or not. Then you start reflecting on what you could have done differently. Nearly every game you want to do something differently."

Clattenburg, who was entrusted with the finals of the Champions League, European Championship and FA Cup this year, consults a psychologist.

"The mental strength of refereeing now is probably one of the biggest things," he said.

Such candor is rare from English Premier League referees who are usually prevented from speaking publicly. Instead, fans make assumptions.

"Some people have this perception that I'm an arrogant person but, when you are on the pitch, you have got to deal with these players differently than in life," Clattenburg said, adding he has matured during 12 years overseeing games in the Premier League after being named referee of the year at a ceremony in Dubai.

"I am strong willed now," Clattenburg said. "I do what I believe is correct. I'm a professional but I have to make sure I apply my personality to the pitch because you have to have personality and not robots. Players want a little bit of personality."

Clattenburg reached the pinnacle of his profession the hard way. He was fired by the Premier League referees' body in 2009 over business dealings but won an appeal and was reinstated. In 2014, Chelsea accused Clattenburg of making a racist remark toward midfielder John Obi Mikel and it took a month for the authorities to clear the referee of wrongdoing.

"It was a tough moment in life and the pressures were huge. It took me a little while to come back because I didn't know if I wanted to referee or not because I lost the love for refereeing," Clattenburg said.

The love was regained and Clattenburg feels stronger coping with pressure. And rather than just reflecting on the highs of 2016, Clattenburg now opens up about where he went wrong — starting with the FA Cup final in May when Manchester United beat Crystal Palace. Former players, including Rio Ferdinand and Alan Shearer, berated Clattenburg for decisions that went against Palace and now the referee acknowledges he "made a couple of errors."

Clattenburg was trying to let the game flow in the same approach he adopted in Real Madrid's Champions League final victory over Atletico Madrid later in May and the European Championship final in July when Portugal beat host France.

"I wanted the games to be a spectacle," Clattenburg said. "People will say that's not the referee's job but referees can help and allow the game to move a little bit quicker than normal. That's my satisfaction: if you get a really good game of football."

That requires referees to judge situations.

"Referees adapt their style of refereeing which allows flow," Clattenburg said, "which allows a little bit of contact for the excitement without jeopardizing players' careers, which is the most important thing."

The Euro 2016 final was marked by an early foul on Cristiano Ronaldo by Dimitri Payet which eventually forced the Portugal captain off the Paris pitch.

"It was a difficult few moments because players were angry that their best player had left the pitch," Clattenburg said. "I had to make sure their emotions didn't overcome anything."

More recent criticism followed Manchester United's 1-1 draw against Burnley at Old Trafford when a trio of decisions went against the hosts. A potential penalty was denied, manager Jose Mourinho was sent to the stands and Ander Herrera was sent off.

"I was analyzing the game back, what could I have done differently, regretting one or two situations of course," Clattenburg said of his post-match journey. "I just drove past (my home) and I was further up north than I should have been."

Refereeing is evolving, as are tactical trends.

"I don't understand (the players') energy levels with the high pressing game," Clattenburg said. "It's making us as referees having to be faster, quicker and fitter."

Three-man defenses rather than the traditional back-four are now in vogue in the Premier League.

"It does affect us because teams play with wing backs and then what you might have is potential blocks where the fullback of the other team is trying to block the winger," Clattenburg said.

One of the thorniest decisions for referees to judge is diving. In Clattenburg's last game, he booked Crystal Palace winger Wilfried Zaha for going down too easily in the box rather than awarding a penalty against Watford.

"Diving is one of the hardest things for referees to detect," Clattenburg said. "We are never going to get 100 percent accuracy. There will be contact and we don't understand how much contact there is. But you try to analyze how they fall and break the fall. Is it natural or not?"

Soon Clattenburg will be able to defer to video replay technology, which is undergoing tests throughout the world.

"The major errors where we get hugely criticized will become less and less," he said. "What will people have to criticize referees for? It will only be personal abuse, not over decisions."

And some of that abuse has come over his tattoos. Clattenburg proudly displays inkings markings landmarks in his career, including refereeing the 2012 Olympic gold medal match in London and this year's finals.

"People see it as a negative thing," Clattenburg said. "But I'm proud of what I've done."