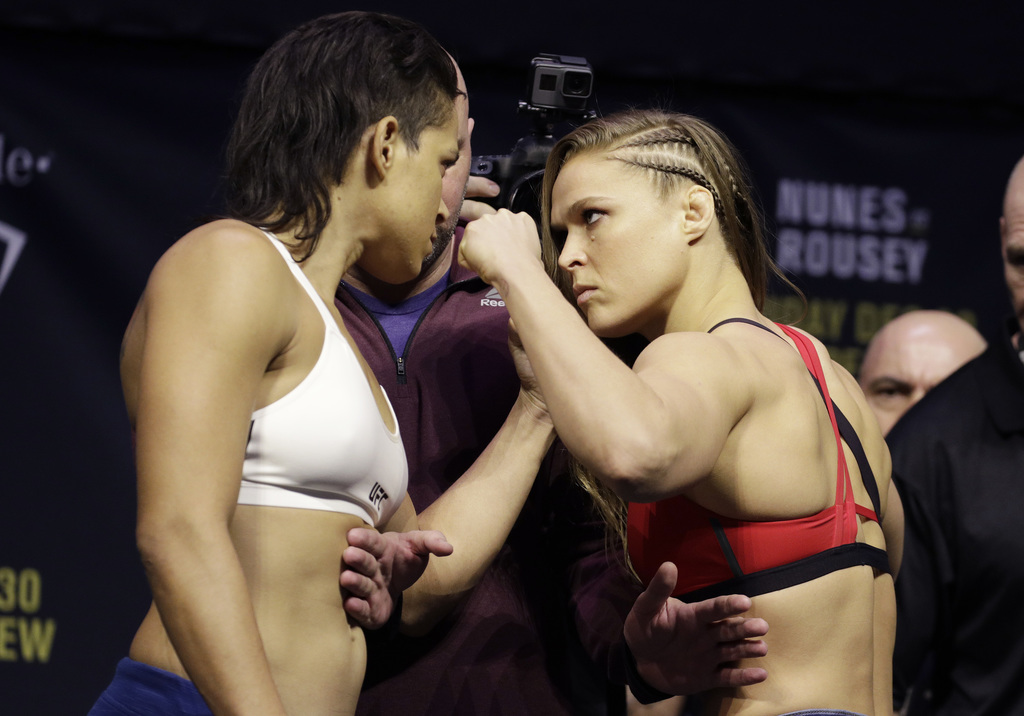 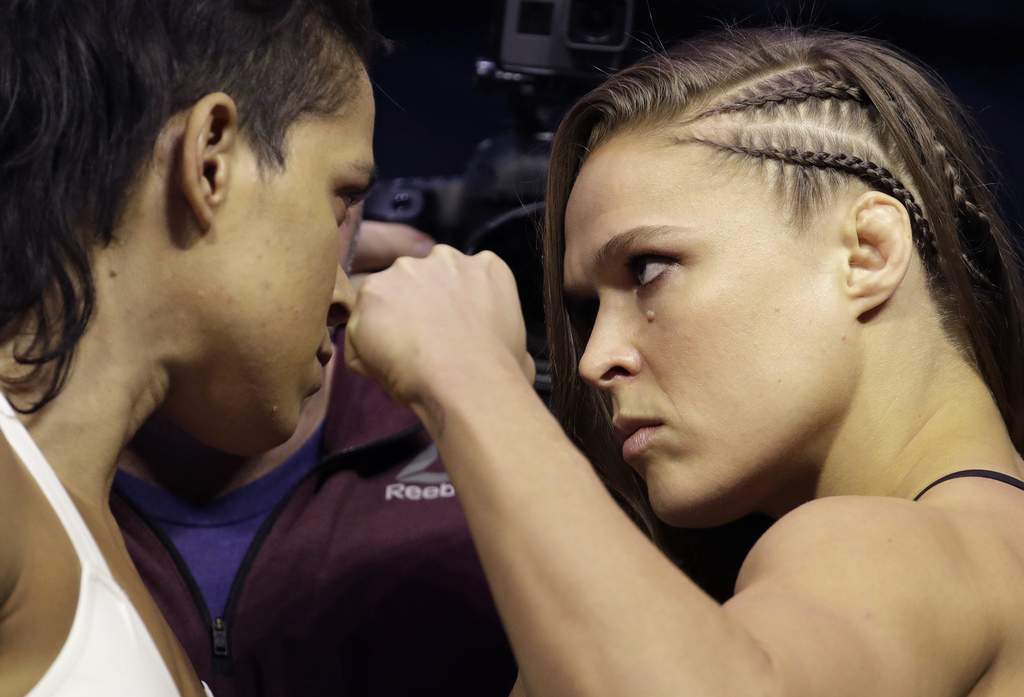 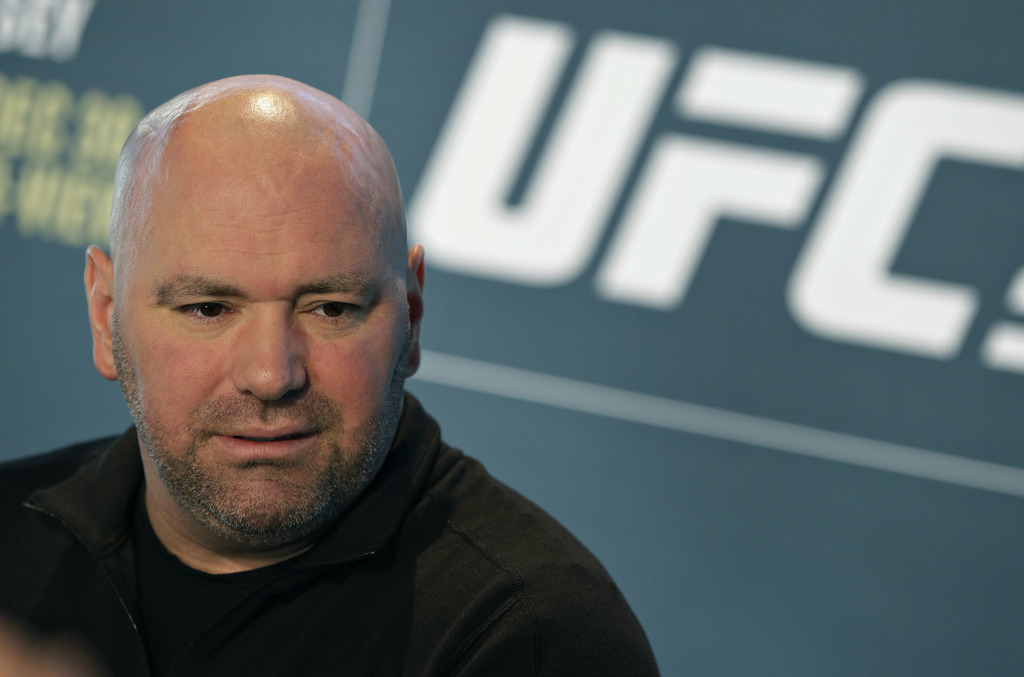 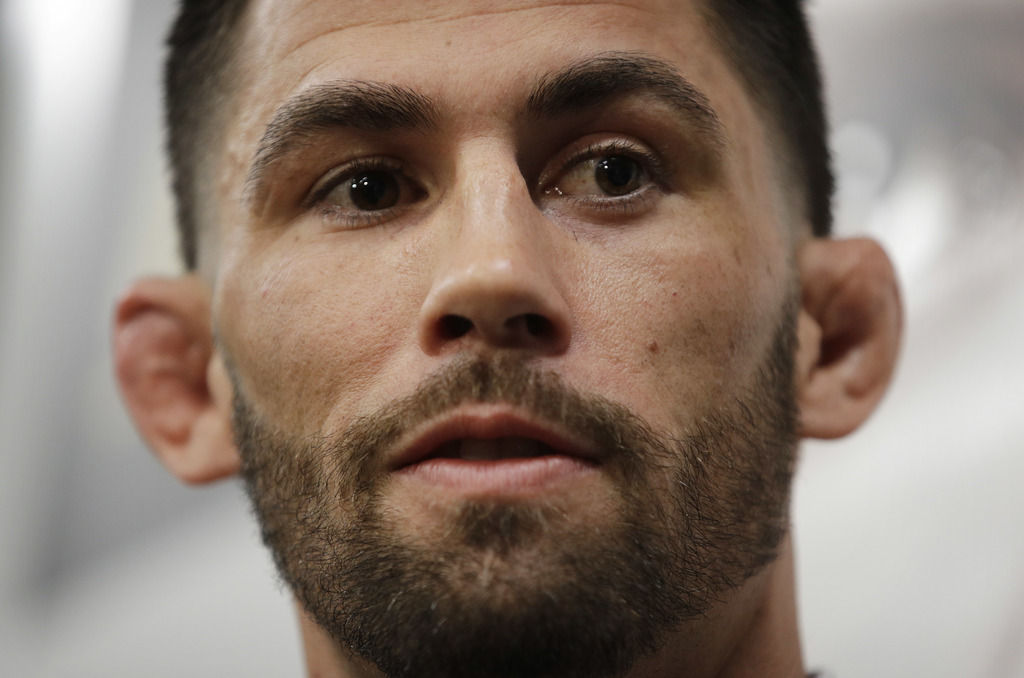 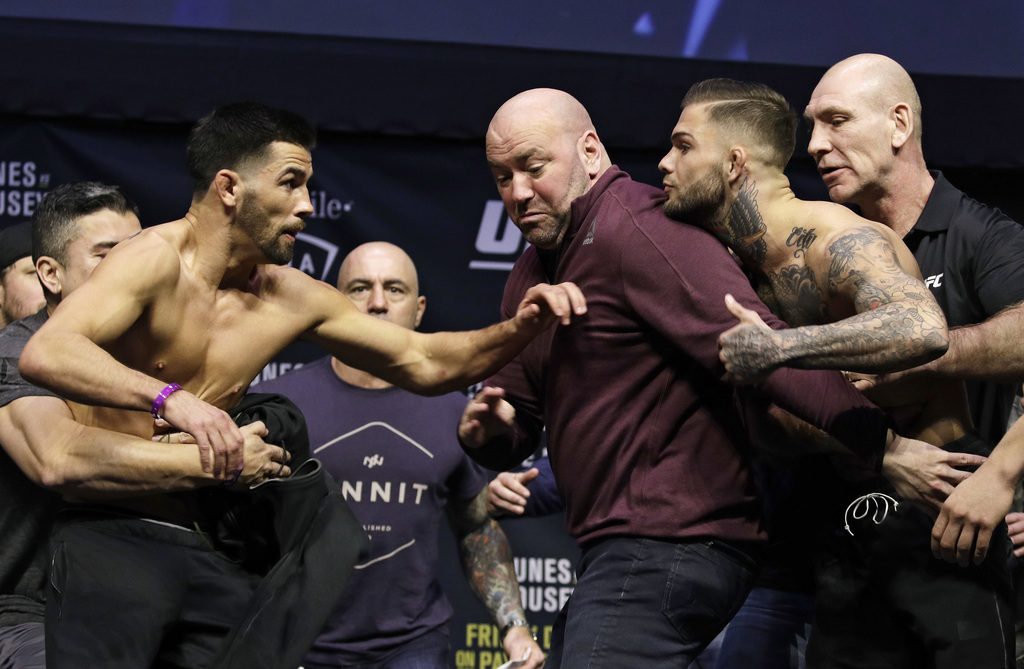 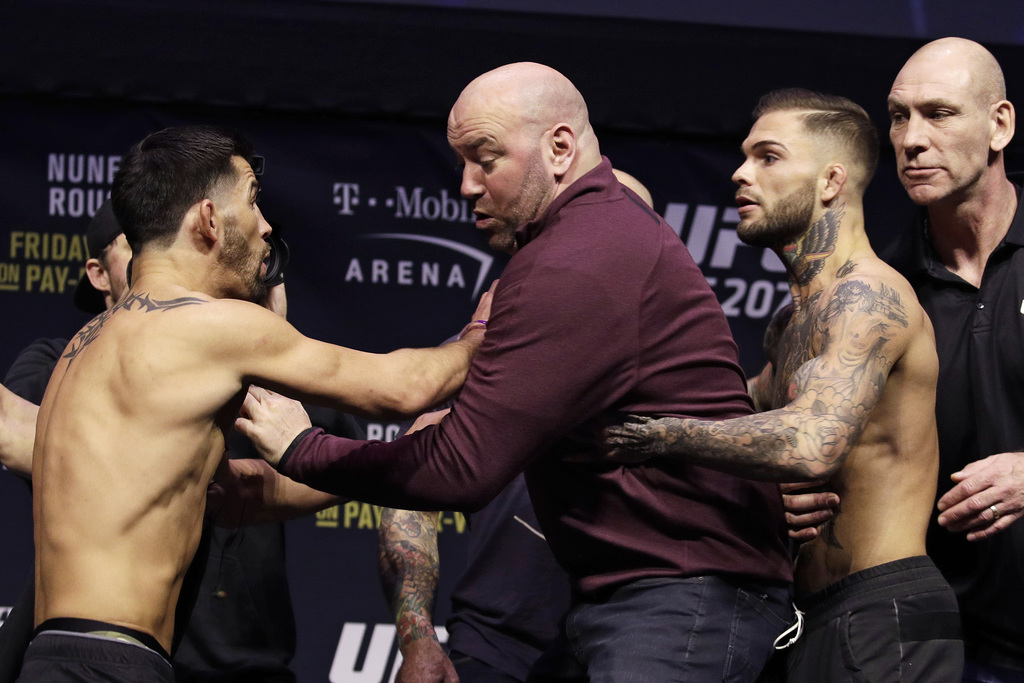 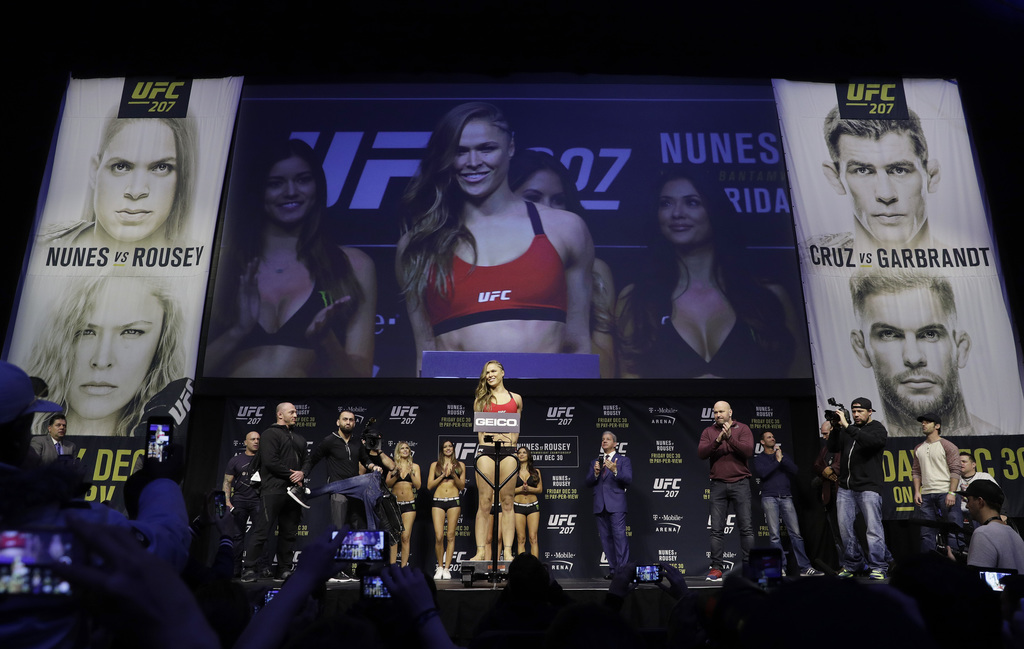 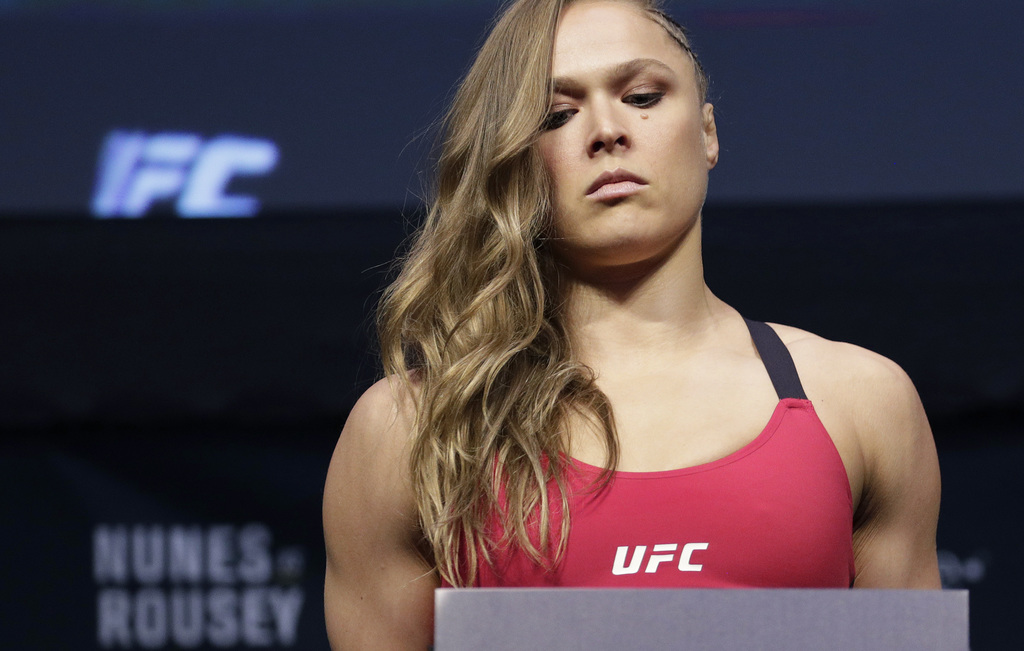 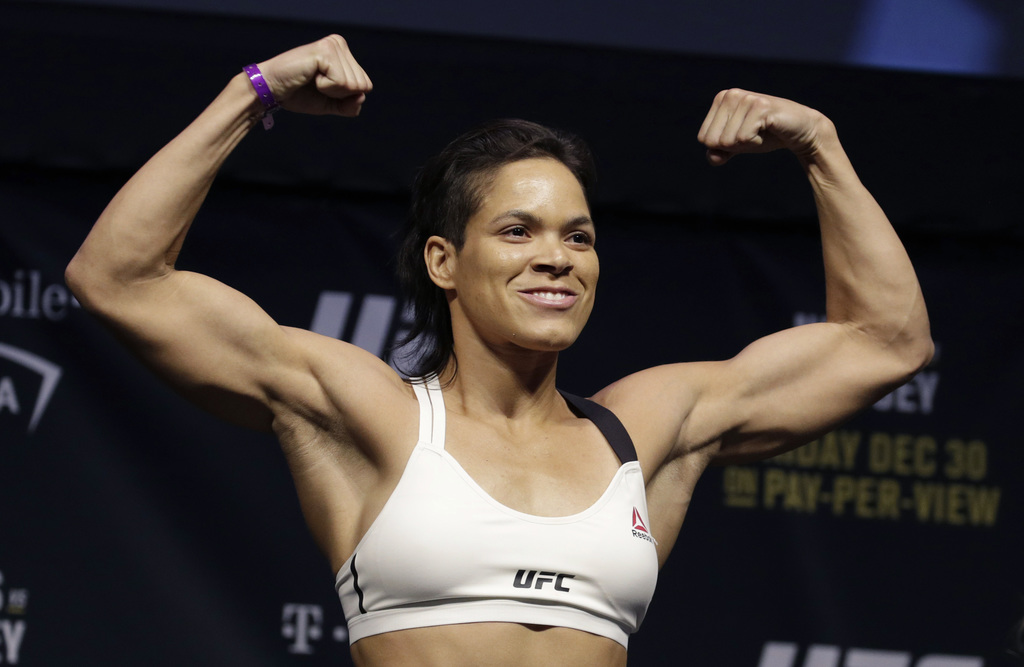 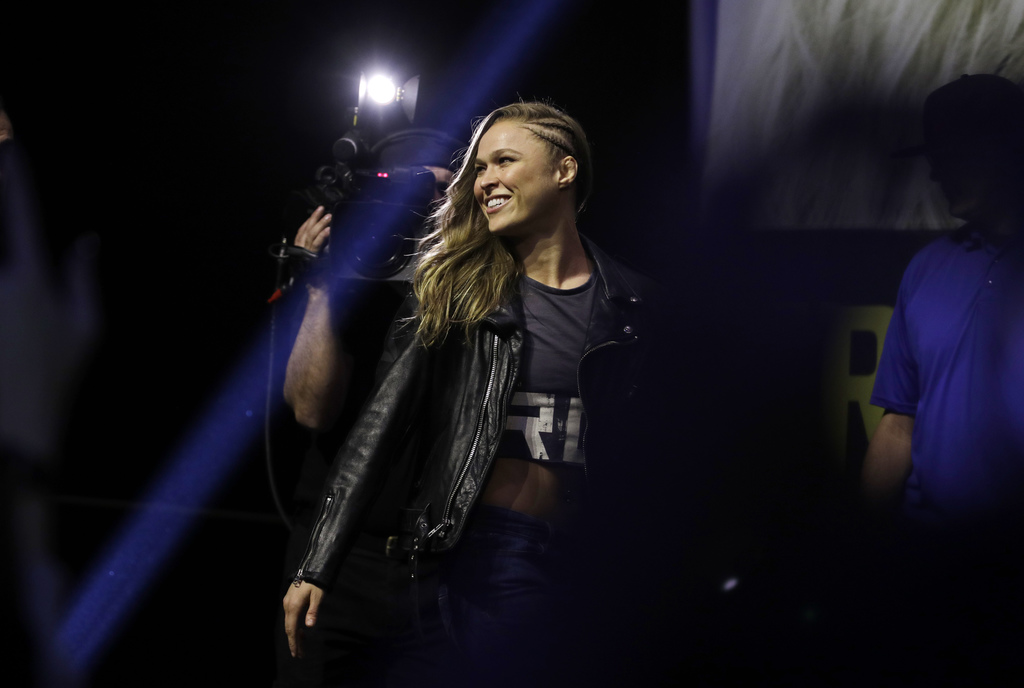 LAS VEGAS (AP) — Ronda Rousey climbed on the scale and glared into the distance while the crowd roared. Moments later, she directed that withering gaze at UFC bantamweight champion Amanda Nunes, who stared right back.

Rousey then left the stage at T-Mobile Arena on Thursday without a word to Nunes or the thousands of fans gathered largely to support her at the weigh-in on the eve of UFC 207.

Rousey (12-1) was arguably the most dominant mixed martial arts fighter in the young sport's history until she lost her belt 13 months ago in a stunning knockout. After devoting a year to getting back on top, Rousey is determined to earn her redemption Friday night with her skills, not her words.

Her comeback fight against Nunes (13-4) is the main event in the UFC's traditional end-of-the-year show in its hometown, and few events in the promotion's blockbuster 2016 have been more anticipated.

Nobody is certain which Rousey will show up in the cage.

Will it be the confident judo genius who thrashed a series of overmatched opponents while blazing a trail into the mainstream for women's MMA and the UFC in general?

Or will it be the shaky, distracted veteran who stumbled, flailed and eventually got stopped by Holly Holm's head kick in Australia last year?

"I'm not sure how it's going to be, but she could do a lot of things," Nunes said. "Nobody knows, but I know I'm going to be ready. We will see about her."

Just don't ask Rousey what she thinks. She has largely refused to promote her fight, even declining to speak to the UFC's broadcast team after stepping on the scale.

The UFC reluctantly agreed to Rousey's media blackout, realizing it could cost the promotion untold numbers of pay-per-view buys.

"It's definitely not ideal," UFC President Dana White said of Rousey's decision. "It's what she asked for."

"Looking forward to proving you all right tomorrow," Rousey said. "It's going to be the happiest New Year ever."

Rousey has a nascent acting career and innumerable endorsements, but her celebrity still hasn't outstripped her athletic accomplishments, as it did for fellow women's MMA trailblazer Gina Carano. Rousey could have walked away from the sport already, but the Olympic medalist's willingness to return underlines her determination to get back on top.

The women's bantamweight belt has changed hands three times in the last 13 months, and nobody has successfully defended it. Holm lost the belt when Miesha Tate choked her unconscious in March, and Tate lost the title when Nunes brutalized her at UFC 200 in July.

Holm is now a featherweight, and Tate has retired. Nunes is getting her career-defining shot at Rousey, whose status as one of the world's most famous female athletes has scarcely waned despite her decision to take a year off from competition.

Rousey clearly doesn't scare Nunes, even though the champ has three career losses to fighters who were beaten easily by Rousey.

"This is what I've been waiting for," said Nunes, who has won four straight fights. "Everything I work for comes down to this. I don't know what's going on with Ronda, but I know I'm ready."

Although Rousey should draw in plenty of casual fans in for the UFC despite her refusal to promote, there's no shortage of intriguing reasons for MMA aficionados to check out the final card of the year.

Men's bantamweight champion Dominick Cruz and unbeaten challenger Cody Garbrandt have put on a promotional show heading into their own title fight in the co-main event at UFC 207.

The loquacious Cruz (22-1) has cleverly taunted his increasingly irritated opponent, culminating in a thoroughly entertaining joint interview on Wednesday and a subsequent staredown that required White to break them apart. Garbrandt (10-0) then got into a brief physical altercation with Cruz's teammate, Jeremy Stephens, at the weigh-in.

Cruz relishes the chance to beat another fighter from the Team Alpha Male camp in Northern California.

"None of those guys have a clue what to do with me," Cruz said. "He's going to figure that out after the first round when he's in there punching, he's in there missing. He's looking to land that big punch he's landed on everybody else, and I'm gone. I'm a ghost. I'm not there."