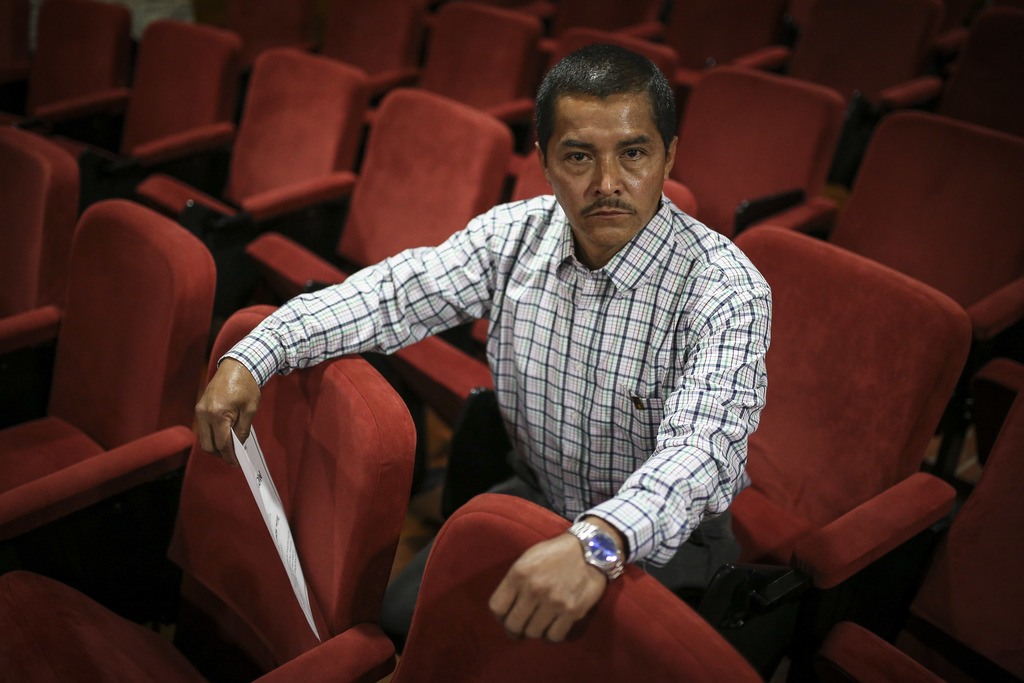 MEDELLIN, Colombia (AP) — When Wilson Lopez lived in the jungle, he thought civilian life in the city meant meeting people, walking the streets, having a job. But the former Colombian guerrilla wasn't able to do any of these things.

Lopez went from a Revolutionary Armed Forces of Colombia jungle camp to prison and then to the streets of Medellin after receiving a pardon in January. Since then, he hasn't been able to find a steady job or home, and couldn't go for stroll with his family in Medellin after he received death threats from a criminal group that said it didn't want rebels in its territory.

"I am in the mouth of the tiger," said Lopez, who agreed to speak with The Associated Press inside a warehouse in the capital of Colombia's mountainous Antioquia province. He wore a cap pulled low over his face and was accompanied by a friend.

Lopez was one of 30 rebel prisoners pardoned by the government of President Juan Manuel Santos as a confidence-building gesture to advance peace talks with the FARC, as Latin America's last major leftist guerrilla army is known. Lopez's troubles integrating into civilian life highlight the difficulties that some 8,000 FARC guerrillas and 4,000 prisoners will face in rejoining society as part of the historic peace pact ratified by the country's congress on Nov. 30.

Experts say reintegrating rebels may face an especially hostile welcome in areas with high levels of crime and drug trafficking, and in areas that were previously under FARC control.

Trust is difficult to build following a 52-year conflict characterized by brutality. Fighting between guerrillas, right-wing paramilitaries and the armed forces has, according to government figures, left a toll of more than 220,000 dead, some 40,000 disappeared and over 5 million driven from their homes.

The guerrillas recall how during 1980s peace talks that ultimately failed, the FARC established a party known as the Patriotic Union as its political arm. In just a few years, more than 3,000 leftist activists, rebel sympathizers and two presidential candidates were gunned down by paramilitaries, often working with state security forces.

"There is a need for more action by the government and the creation of mechanisms to protect" rebels who lay down their arms as part of the peace deal, said Todd Howland, the representative of the U.N. High Commissioner for Human Rights in Colombia. "There is much to do in the field."

Just this month, another 110 inmates were pardoned and the FARC is demanding that all its prisoners be released if the group is to lay down its arms.

For Lopez, who had spent two decades in the FARC and was jailed in 2010, the problems for himself, his wife and two children began soon after he was released from prison.

He said he was intercepted in the street by three men who told him that guerrillas were not welcome in the area. Then he received three threatening letters signed by a gang called "The Rastrojos."

One of the letters read: "You and your family are declared military targets by our organization. For the health of you and your family, you have 12 hours to leave this house." The letter had been slipped under the door.

He asked authorities for help and he now lives under police guard in a rural area four hours from Medellin — the area that saw the birth of Colombia's paramilitaries.

He recalled that when his protection team arrived, he was so afraid he hid and didn't emerge until he had received a telephone call confirming who they were. They told him they had been looking for him for three months and he responded that he moved constantly for his family's security.

"I don't trust anyone and in you even less," Lopez said he told the agents.

Attacks on community leaders and human rights activists have jumped this year, especially since the initial peace accord was signed on Sept. 26. That pact was rejected by voters in a referendum and the sides hastily negotiated a second deal that was passed by congress a month ago. According to United Nations' figures, 52 have been killed from January through November, and other organizations say the number has topped 70. Forty-one were killed in all of 2015.

Many of those killings have taken place in areas where the FARC has withdrawn to begin its disarmament.

Adam Isacson, an analyst at the Washington Office on Latin America, said the large majority of the attacks have been on members of the community and human rights groups, but not on their leaders.

"Something similar could happen with the FARC; its leaders will be well protected, but the lower-level guerrillas will be in greater danger," he said.

Throughout his life, Lopez has only known violence. He said that when he was a child, his family was killed by armed men who accused them of being guerrillas. He wasn't able to study and never learned how to read or write.

As a teenager, he tried to farm some land but he received threats telling him to leave or be killed. He said he joined the FARC to seek vengeance.

Lopez said he doesn't want more war, but he can't help thinking about what will happen if reintegrating FARC rebels are killed.