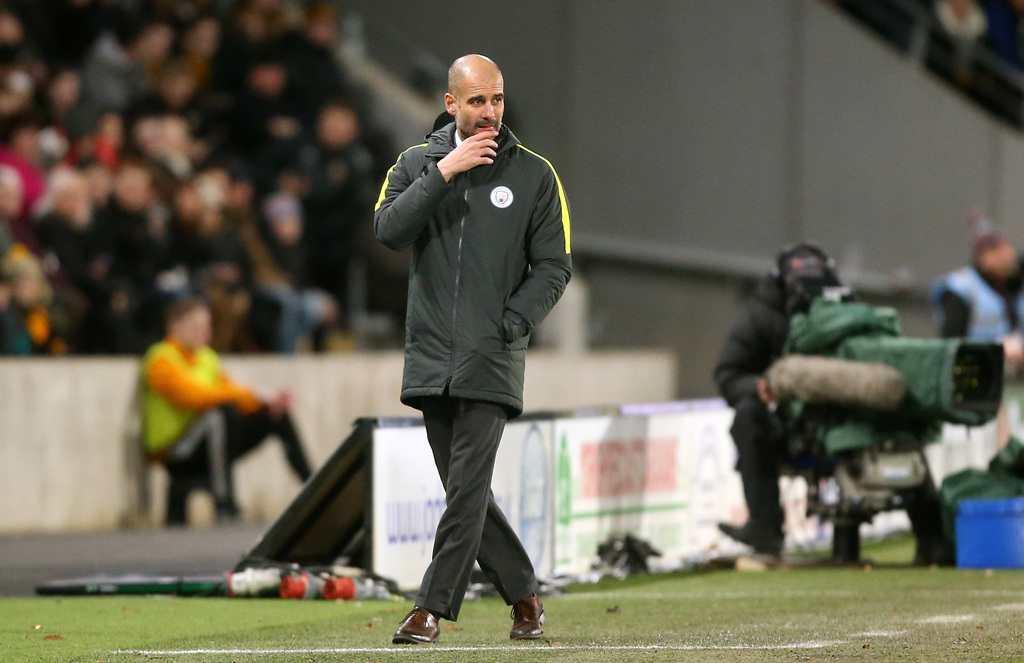 MANCHESTER, England (AP) — It has been a strange season for Sergio Aguero.

The goals have flowed for Manchester City — nothing new there — but other factors have transpired to make it one of the most turbulent periods of the Argentine's career.

The season started with Aguero, one of the world's most feared strikers, being publicly urged by City manager Pep Guardiola to change his style of play in order to become a more complete footballer. He has been dropped for big games by both his club and his country, and found himself sitting out seven of City's 18 English Premier League games through suspension following two separate acts of violent conduct.

The last time Aguero was seen in a City jersey, he was walking sheepishly off the field at Etihad Stadium on Dec. 3 after being shown a red card for a reckless, two-footed lunge on Chelsea defender David Luiz. It has been a grind for City amid its star player's four-match absence, with a humiliating 4-2 loss at Leicester followed by wins over Watford, Arsenal and Hull that lacked the sparkle of earlier in the season.

Now Aguero is available again — and his return can't come quickly enough for City. His first game back is on Saturday away to Liverpool, which has beaten City three straight times in the league and hasn't lost at home to its upcoming opponent in 13 years.

Guardiola has made do without Aguero by selecting four different players — Kelechi Iheanacho, Raheem Sterling, Nolito and Kevin De Bruyne — in the lone-striker role, but Aguero offers a different threat entirely.

"Aguero is a wonderful player," Liverpool midfielder Georginio Wijnaldum said of a striker who has 16 goals from 19 games in all competitions this season, "and can win the game on his own for Manchester City."

In the context of the title race, it is a huge match with Liverpool lying second and City in third. It is a no-lose scenario for Chelsea, which holds a six-point lead and knows one or both of its two closest rivals will drop points.

With struggling Stoke visiting Stamford Bridge on Saturday, there is a strong chance that Chelsea will be extending its winning run to 13 games — matching the top-tier record in English soccer.

So neither Liverpool nor City can afford to lose a game that has the makings of a classic, given the teams' attractive and attacking style of play.

"For me," City midfielder Yaya Toure said, "it's almost a 'final' of the Premier League because I think it's going to be a similar kind of football. I think for the fans, it's going to be fantastic."

Here's what else to look out for in the second round of Premier League matches in the busy festive period:

For a promoted team, a game at United's iconic Old Trafford stadium is always something to look forward to. It will be particularly special for Middlesbrough manager Aitor Karanka.

Karanka will be reunited with United manager Jose Mourinho. The pair worked together for three years as coach (Mourinho) and assistant at Real Madrid from 2010. It was a glowing reference from Mourinho that helped get Karanka the job at Middlesbrough in 2013.

"I have a lot to thank Jose Mourinho for," said Karanka, who added he will "share a glass of wine or beer or coke" with his old mentor after the game.

Sixth-placed United has won its last four league games to move back in touch with the Champions League qualification positions.

Sunderland's hopes of getting out of the bottom three took a hit ahead of the game against its likely relegation rival, with manager David Moyes saying goalkeeper Jordan Pickford would miss the next "six to eight weeks" with a knee injury.

Alongside striker Jermain Defoe, the 22-year-old Pickford has been Sunderland's most important player in a tough season for the team.

"It's a major disappointment for him and for us because he's been saving us points," said Moyes, who will replace Pickford with Vito Mannone.

Sunderland is third from bottom, six points behind Burnley.

Swansea begins life after Bob Bradley, who was fired on Tuesday, with a home match against Bournemouth. Long-time assistant coach Alan Curtis will be in temporary charge of the Welsh team, which is next to last and only above Hull on goal difference.

Hull hosts Everton on Friday while, on Saturday, it's also Leicester vs. West Ham and Southampton vs. West Bromwich Albion.