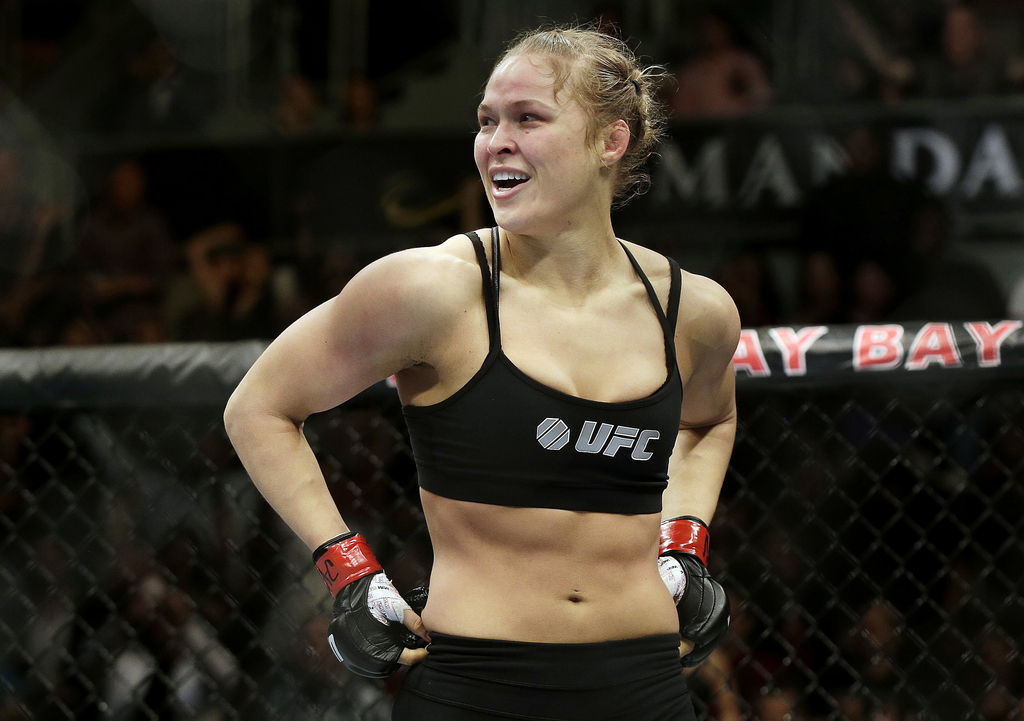 LOS ANGELES (AP) — Ronda Rousey is returning to mixed martial arts Friday after a 13-month absence, taking on Amanda Nunes for the bantamweight title at UFC 207.

Just don't expect to hear about it from Rousey.

The once-dominant champion has largely declined to promote her comeback bout, skipping nearly every traditional pre-fight media responsibility. Rousey's silence leaves Nunes and the other fighters on the card in the awkward position of doing all the dirty work to sell the UFC's end-of-the-year, pay-per-view event in Las Vegas.

Rousey is the most marketable name in the game and perhaps the biggest mainstream star in MMA history, and her return from last year's shocking knockout loss to Holly Holm should be one of the biggest sports events of the holiday period. Rousey (12-1) largely vanished from public after her defeat, but agreed to return for a title shot at Nunes (13-4), who won the belt in July.

Rousey's decision to limit herself to a few talk-show appearances and a fleeting interview or two has forced Nunes — who has a tiny fraction of Rousey's fame — to carry the promotional weight along with talkative men's bantamweight champion Dominick Cruz, who takes on unbeaten Cody Garbrandt in the co-main event at T-Mobile Arena.

Nunes has gamely done hours of interviews in her ever-improving English to promote the show. The Brazilian champion thinks she knows why the UFC has given a free pass to Rousey.

You might not know it from the UFC's posters, videos and TV commercials, which are thoroughly dominated by Rousey's glowering face. She agreed to appear in those in-house promotions, in which Nunes is practically a footnote — a decision criticized on Twitter by no less than Joe Rogan, the UFC's lead color commentator.

Rousey became one of the world's most famous female athletes during her meteoric rise from Olympic judo to MMA dominance, thrashing a series of overmatched opponents.

Her rise ended last November with a head kick from Holm, who made Rousey look unprepared in their lop-sided fight. Rousey cited the grueling grind of fight promotion as a factor in her loss, and she was stunned by the gleeful reactions of schadenfreude on social media after her defeat.

So when she finally agreed to another bout, Rousey was allowed to bypass the usual scrutiny and tedium. The UFC isn't even holding a pre-fight news conference this week.

Promotion is usually a major factor in pay-per-view sales, and the UFC hasn't always been accommodating to its stars. Even Conor McGregor, its charismatic two-belt champion, was pulled from UFC 200 this year when he balked at a request to fly from his training camp to Las Vegas to promote.

Nunes has a stake in the pay-per-view revenue from their fight, so she has ample motivation to promote — and ample reason to be disappointed in Rousey's decision to stay silent. The champion looks at her heavy lifting before UFC 207 as a reasonable price for her chance to get a career-defining win.

"The only thing that I look for in my career is this thing right here: the belt," Nunes said. "Be the champion. And whatever they want to do with Ronda, they can do. (Her name) promotes good. It's going to sell a lot of pay-per-views."