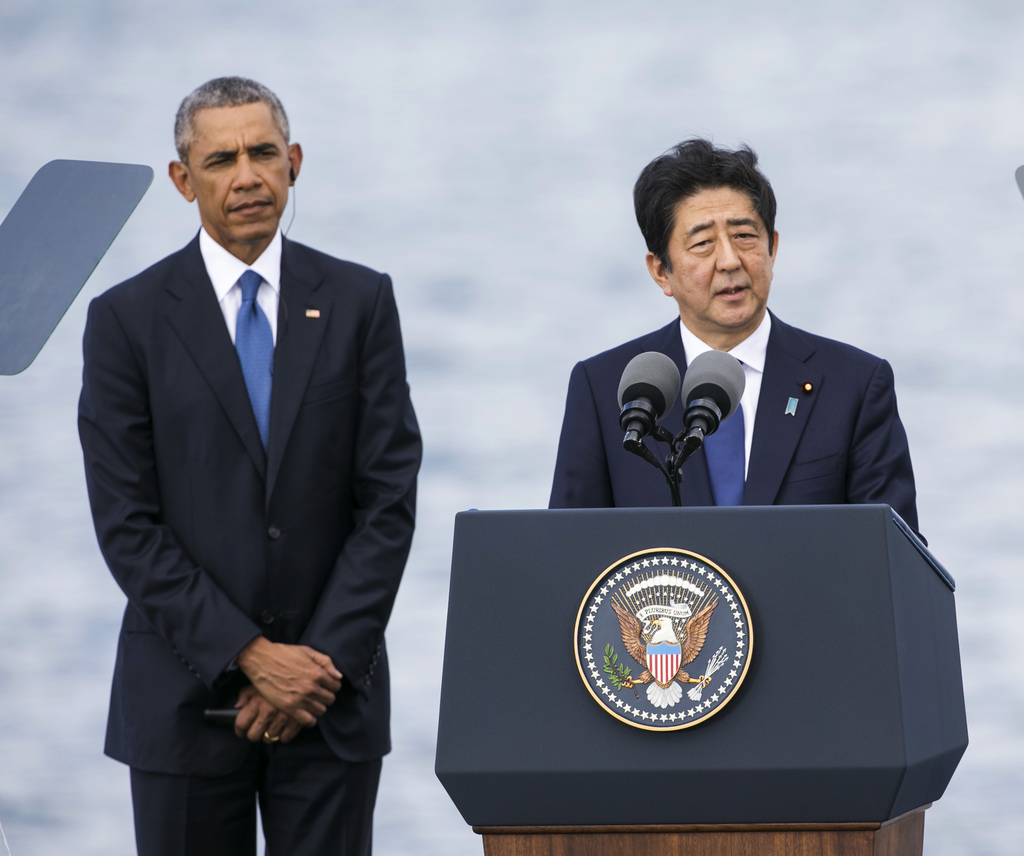 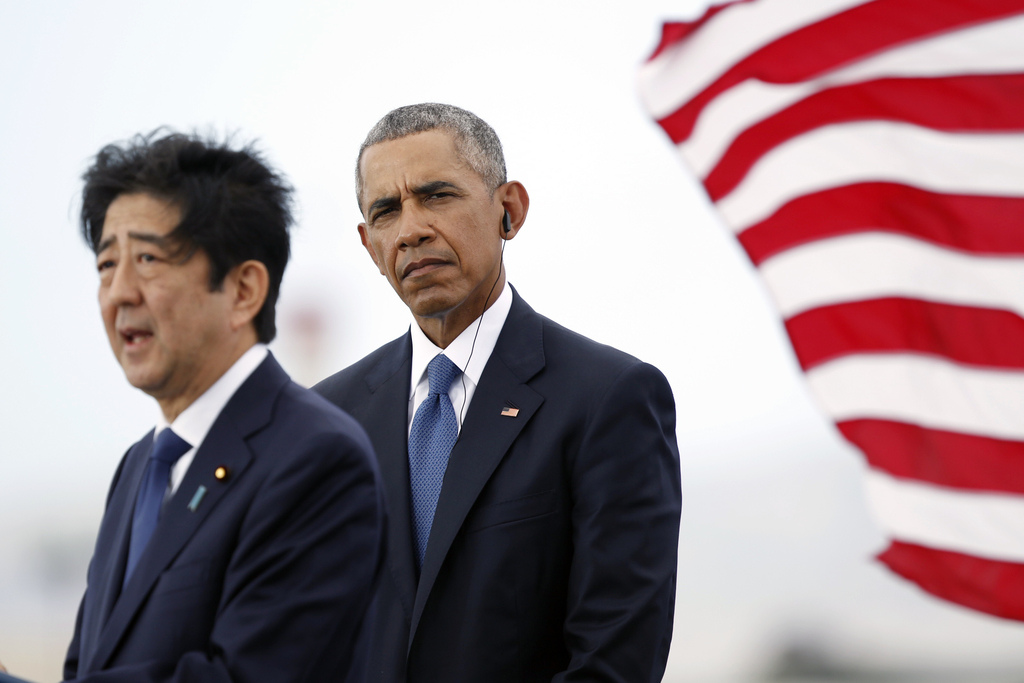 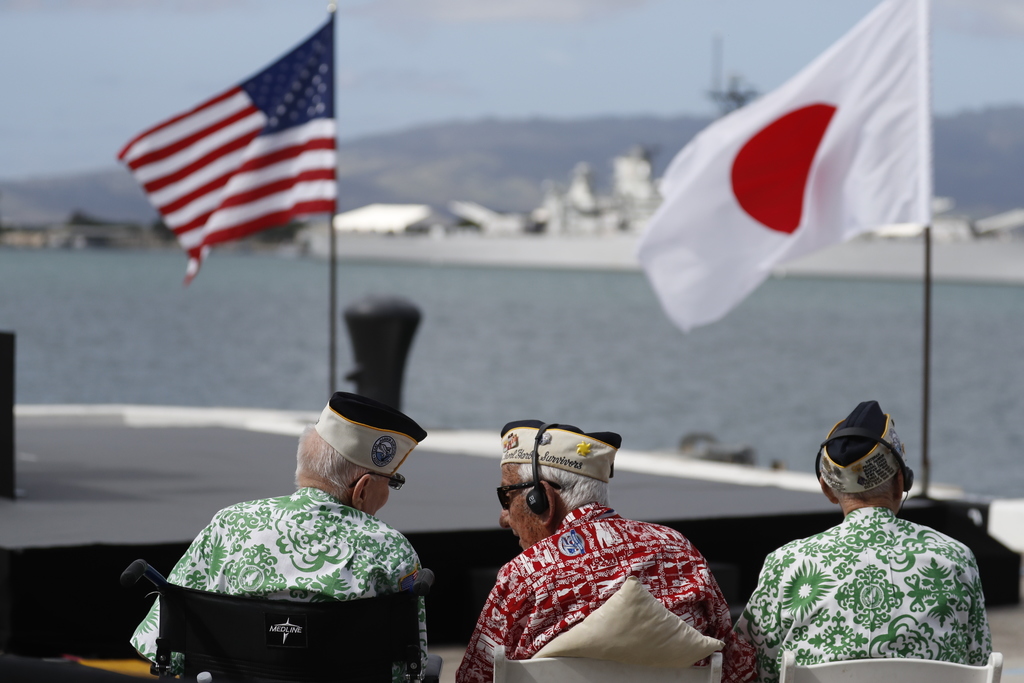 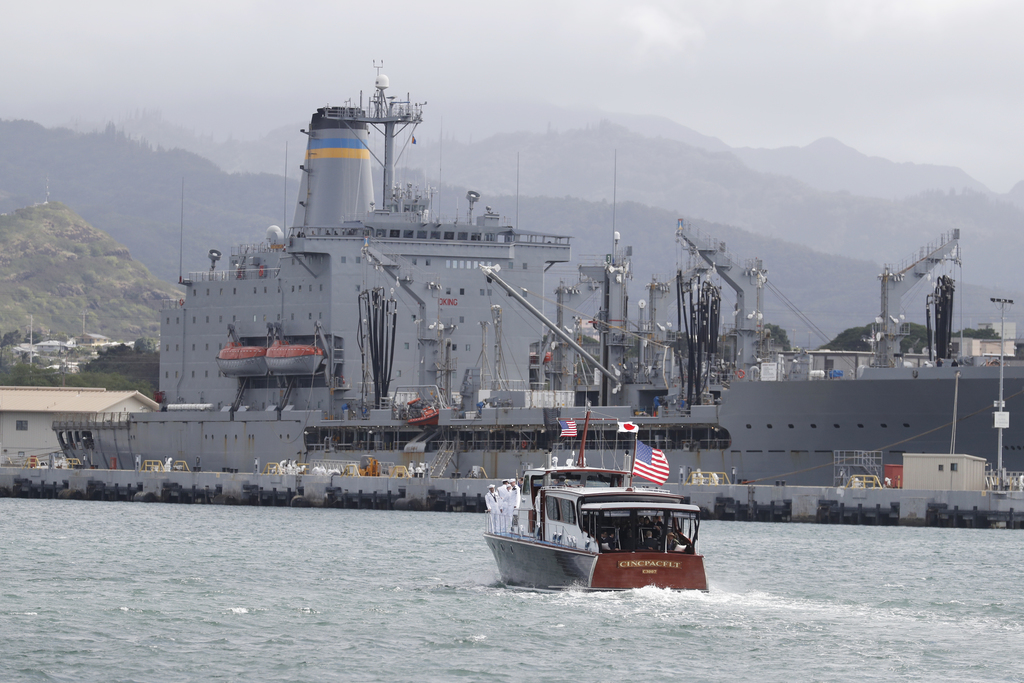 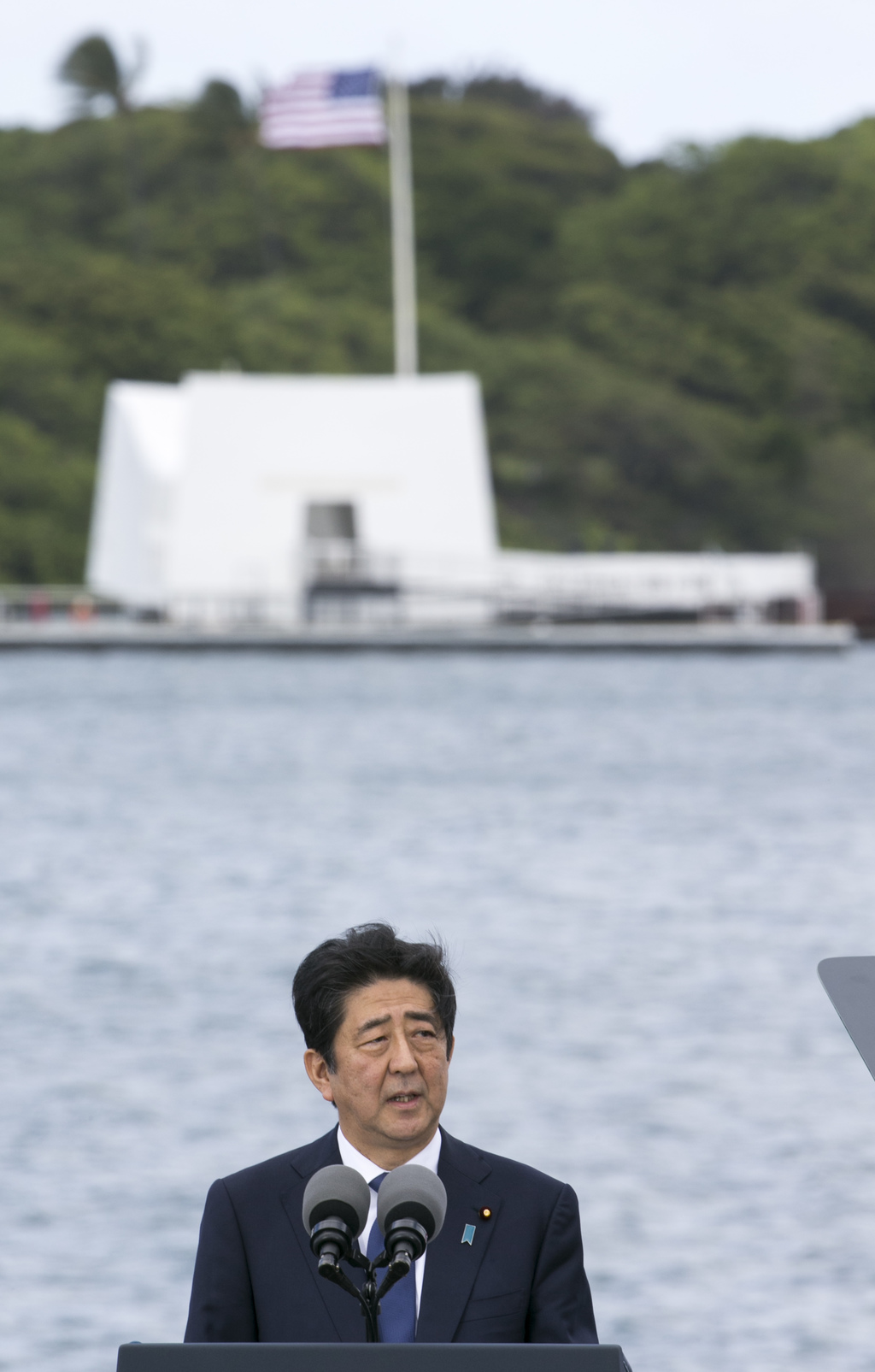 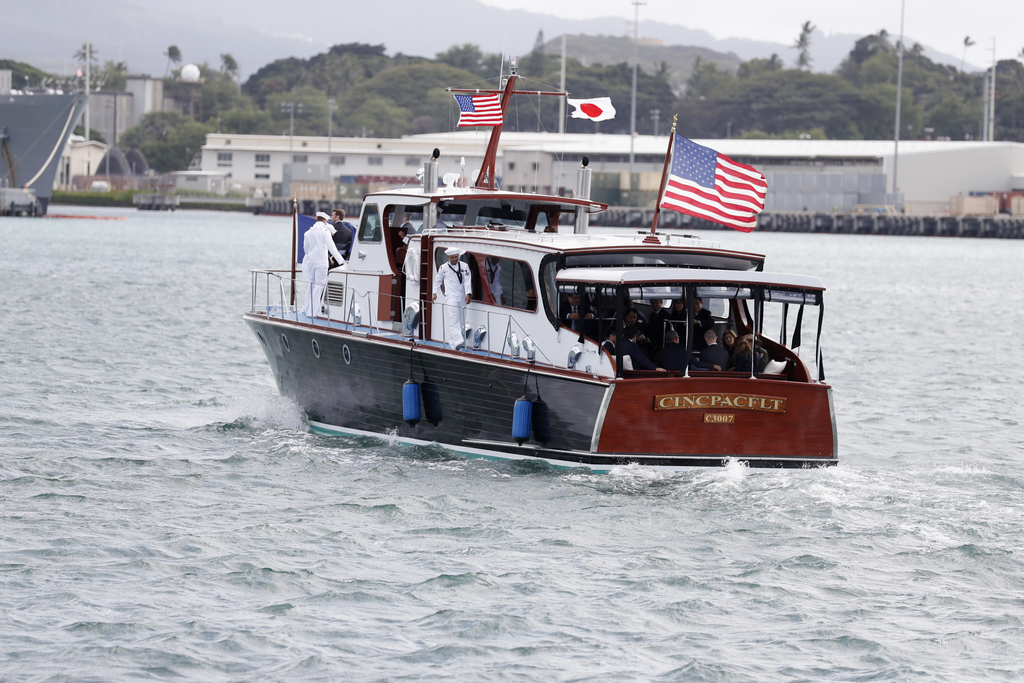 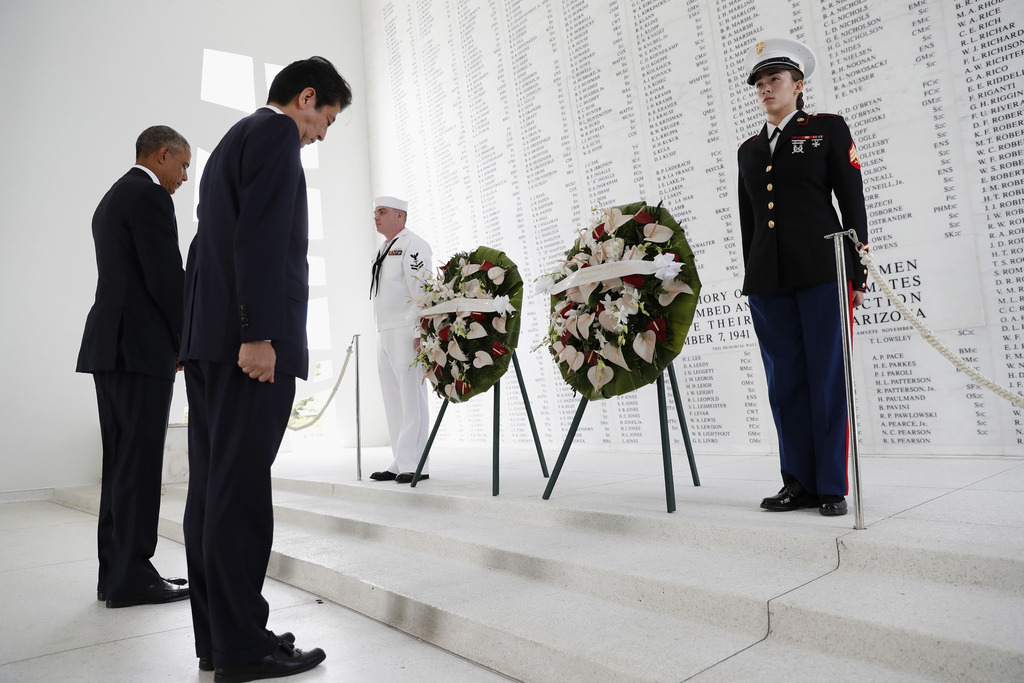 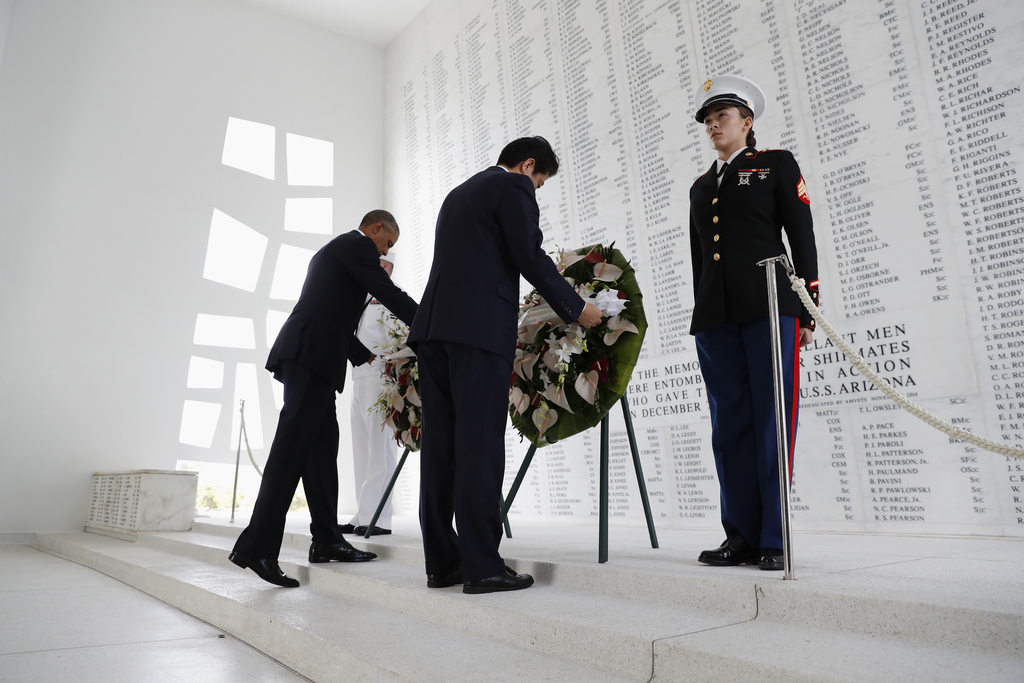 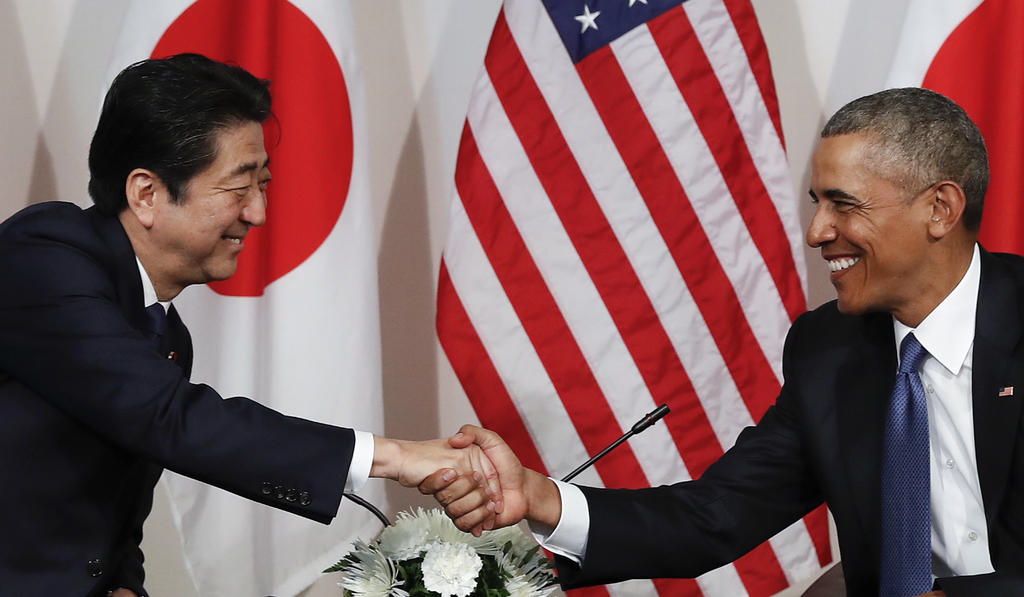 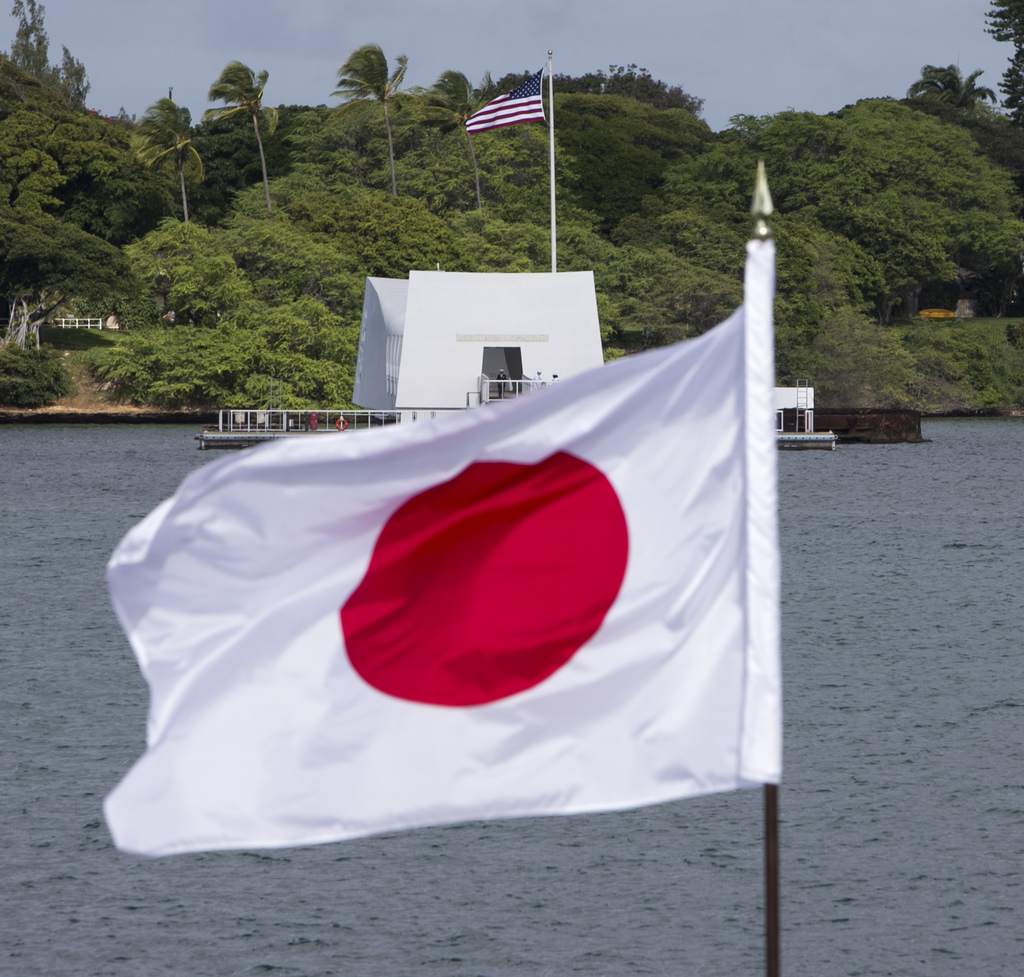 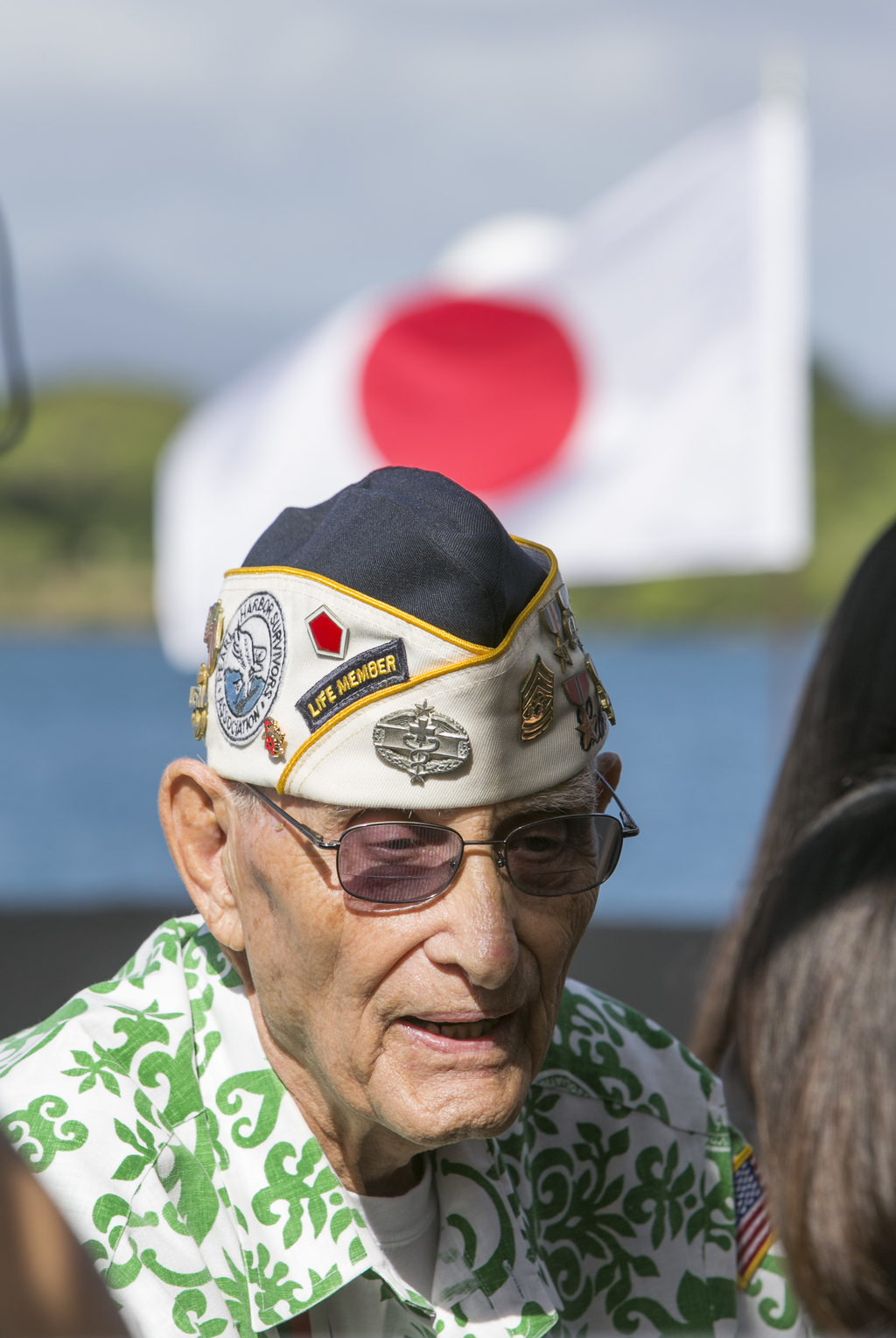 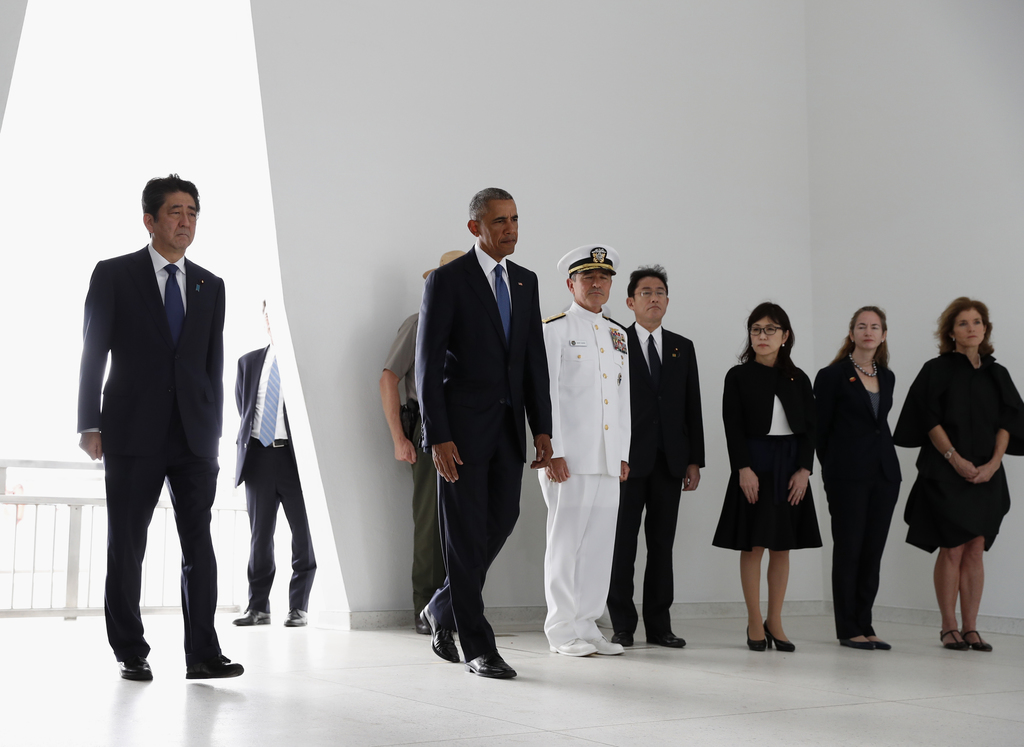 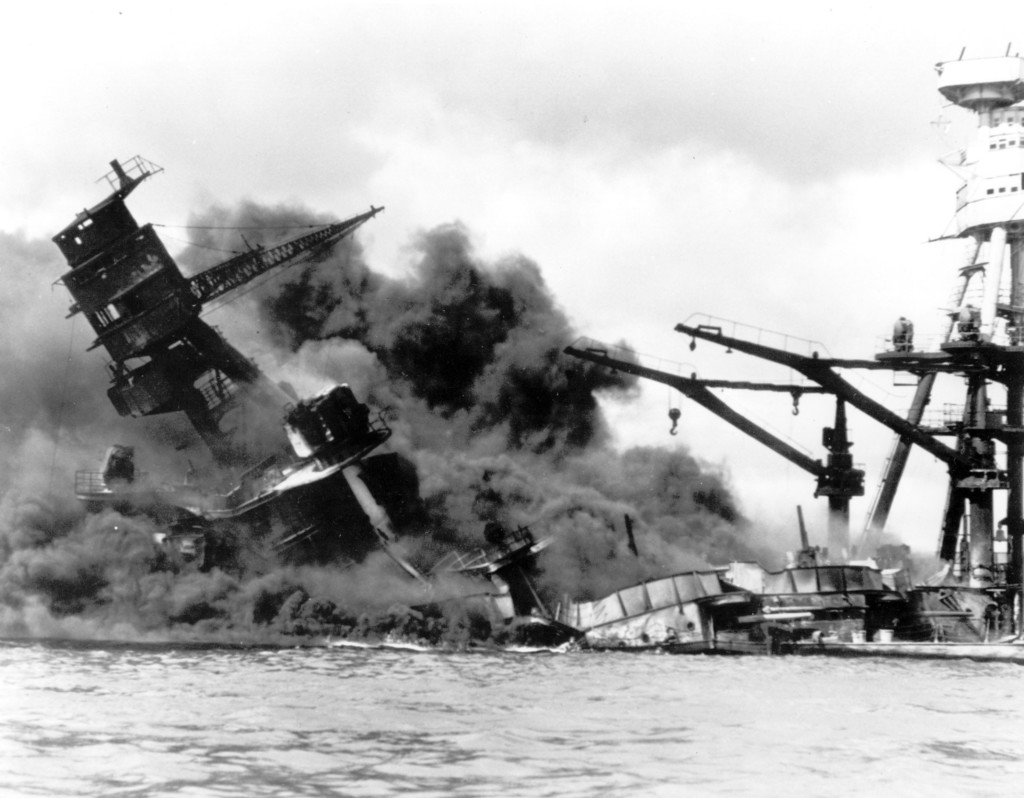 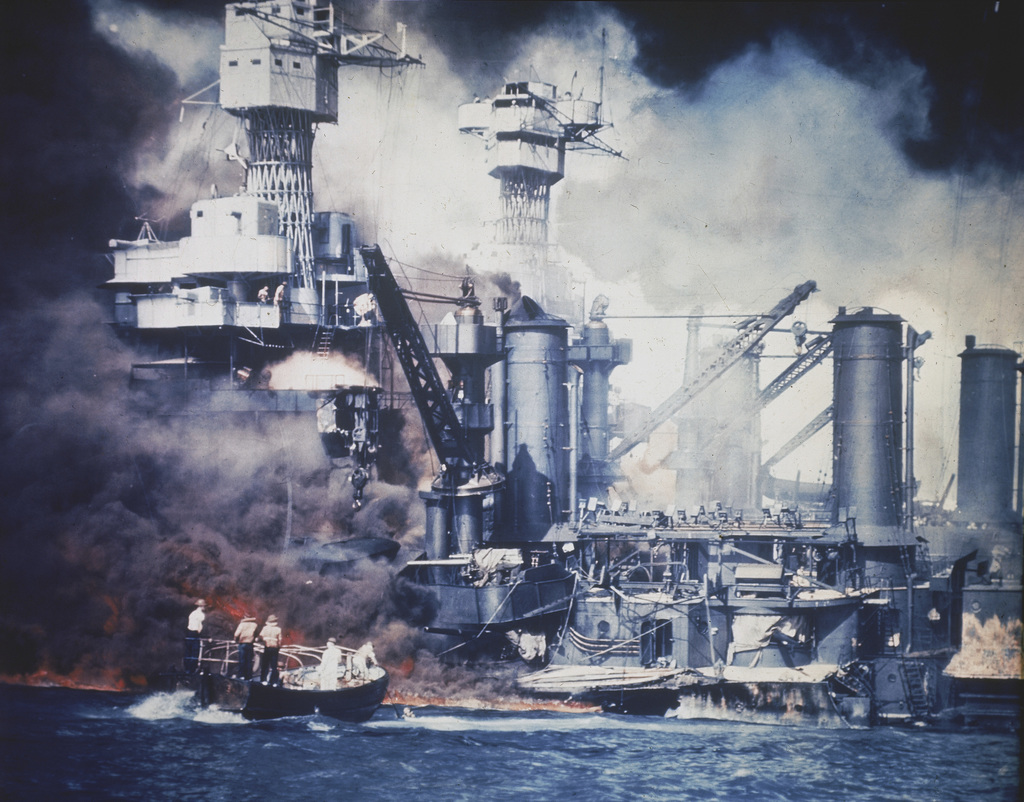 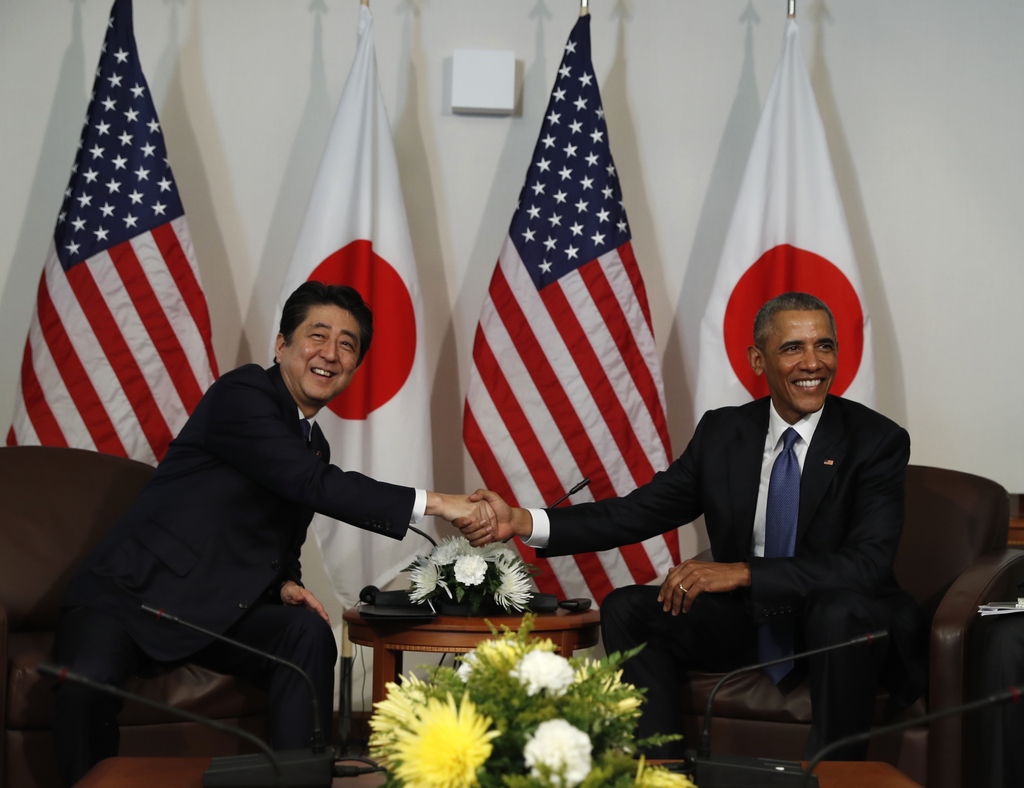 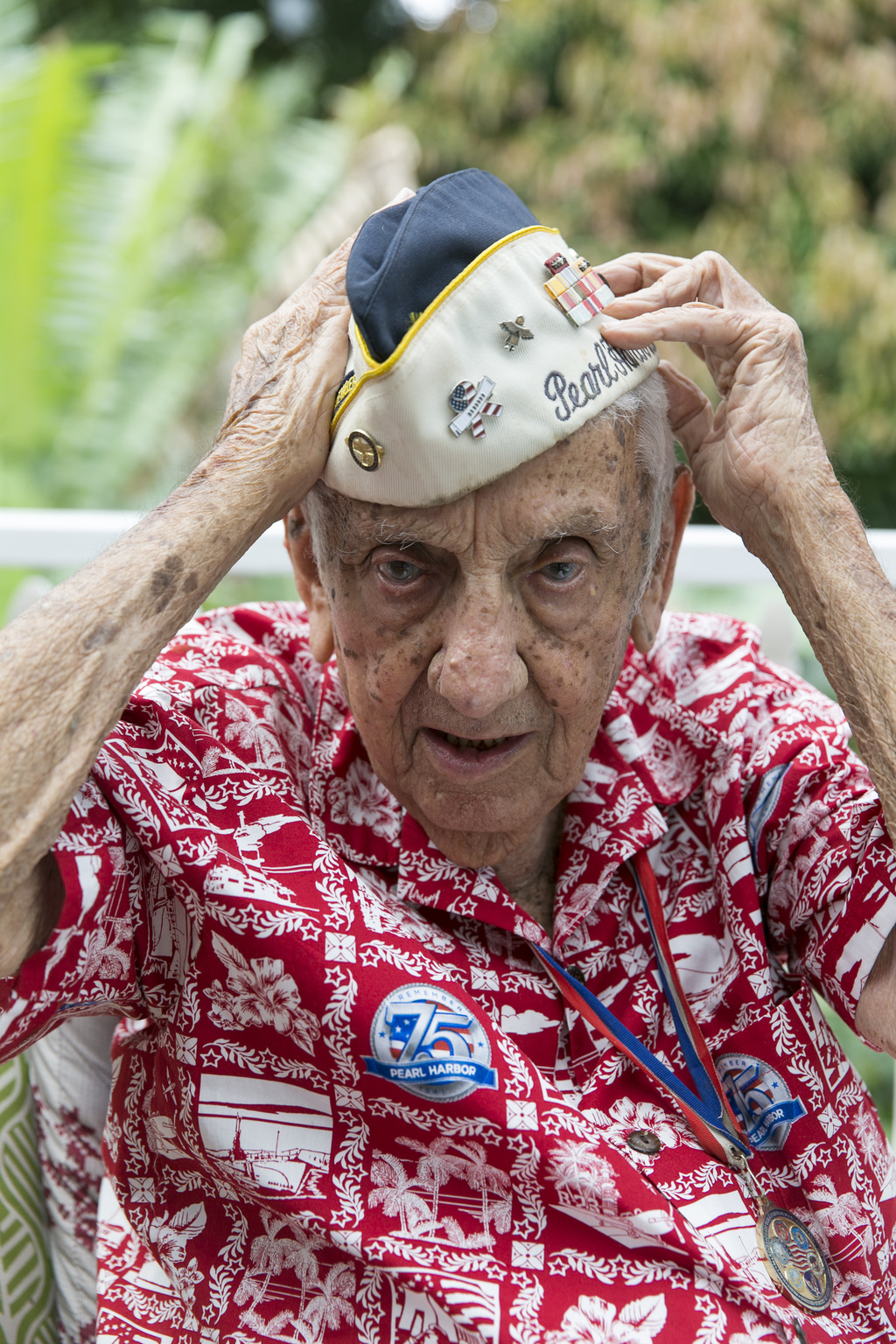 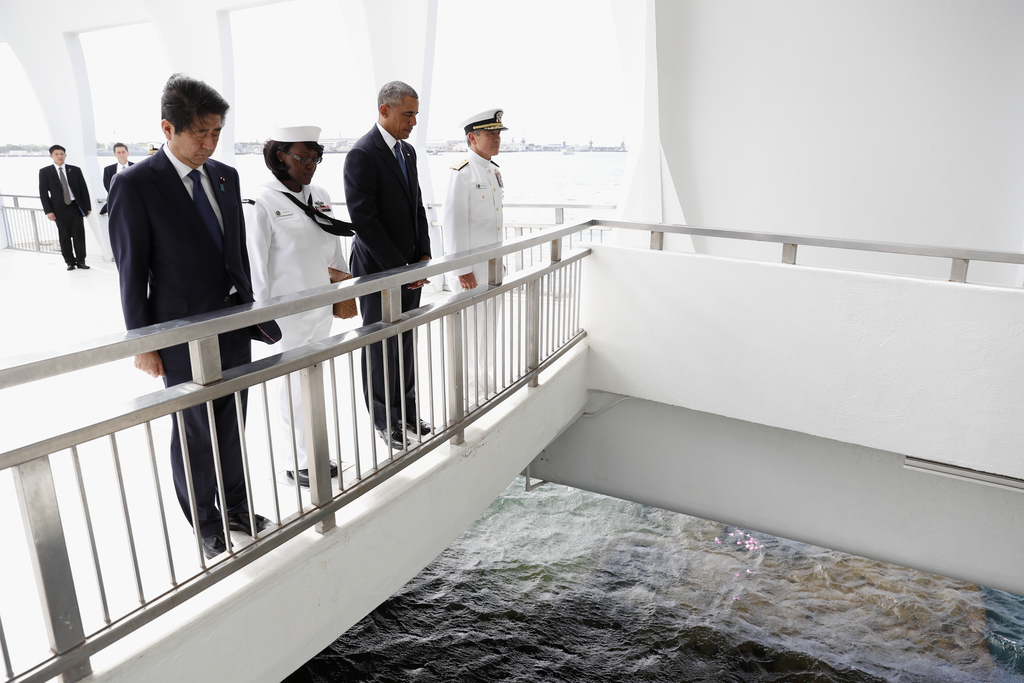 PEARL HARBOR, Hawaii (AP) — The leaders of Japan and the United States sought to remind the world that even the most bitter enemies can become allies, during a historic pilgrimage to the hallowed waters of Pearl Harbor.

Prime Minister Shinzo Abe did not apologize, but conceded Japan "must never repeat the horrors of war again."

Seventy-five years after Japan's surprise attack, Abe and President Barack Obama peered down Tuesday at the rusting wreckage of the USS Arizona, clearly visible in the tranquil, teal water. In a show of respect for the war dead, Obama and Abe dropped purple petals into the water and stood in silence.

More than 1,000 U.S. war dead remain entombed in the submerged ship, which Japan struck as part of the devastating attack that killed more than 2,300 Americans and sent America marching into World War II.

"As the prime minister of Japan, I offer my sincere and everlasting condolences to the souls of those who lost their lives here, as well as to the spirits of all the brave men and women whose lives were taken by a war that commenced in this very place," Abe said later at nearby Joint Base Pearl Harbor-Hickam.

That was the closest Abe would get to an apology for the attack. And it was enough for Obama, who also declined to apologize seven months ago when he became America's first sitting president to visit Hiroshima, where the U.S. dropped an atomic bomb in a bid to end the war.

It was enough, too, for Alfred Rodrigues, a U.S. Navy veteran who survived the attack. The 96-year-old said he had no hard feelings and added, "War is war."

In the years after Pearl Harbor, the U.S. incarcerated roughly 120,000 Japanese-Americans in internment camps before dropping atomic bombs in 1945 that killed some 140,000 people in Hiroshima and 70,000 in Nagasaki.

Since the war, the U.S. and Japan have built a powerful alliance that both sides say has grown during Obama's tenure, including strengthened military ties. Yet there are questions about whether the relationship will fray under President-elect Donald Trump, a possibility neither Obama nor Abe addressed.

Abe, who became Japan's first leader to visit Pearl Harbor with a U.S. president, said the visit "brought utter silence to me." His remarks capped a day that was carefully choreographed by the U.S. and Japan to show a strong and growing alliance between former foes.

Japanese officials said that in their talks, Abe and Obama agreed to closely monitor the movements of China's first and sole aircraft carrier, which has sailed into the western Pacific for the first time.

White House officials who accompanied Obama to Hawaii did not comment on the announcement from the Japanese, and in an unusual move, they didn't release a written description of the meeting. But in Washington, State Department spokesman Mark Toner said the U.S. recognizes lawful uses of the sea, and the same rights apply to the U.S., China and other nations.

He said, "as we often make the case with our own naval vessels sailing ... in those same waters, it's freedom of navigation."

Obama and Abe started Tuesday's activities here with a formal meeting at a another nearby military base, in what the White House said was likely Obama's last meeting with a foreign leader before leaving office in January. It was a bookend of sorts for the president, who nearly eight years ago invited Abe's predecessor to be the first leader he hosted at the White House.

Speaking after he and Abe laid green-and-peach wreaths at the memorial, Obama called Pearl Harbor a sacred place and said that "even the deepest wounds of war can give way to friendship and lasting peace." It's a notion Obama tried throughout his presidency to put into practice, as he reached out to former adversaries Iran, Myanmar and Cuba.

Japanese leaders have visited Pearl Harbor before, but Abe was the first to go to the memorial above the sunken USS Arizona, where a marbled wall lists the names of U.S. troops killed in the Japanese attack.

"There's this sense of guilt, if you like, among Japanese, this 'Pearl Harbor syndrome,' that we did something very unfair," said Tamaki Tsukada, a minister in the Embassy of Japan in Washington. He said he believes Abe's visit would "absolve that kind of complex that Japanese people have."